This method describes how to dissect and assess mammary gland development and function from mice. Excised mammary glands are assessed for the degree of development using whole mount while milk ejection is evaluated using an oxytocin-based myoepithelial cell contraction assay.

The human mammary gland is composed of 15-20 lobes that secrete milk into a branching duct system opening at the nipple. Those lobes are themselves composed of a number of terminal duct lobular units made of secretory alveoli and converging ducts1. In mice, a similar architecture is observed at pregnancy in which ducts and alveoli are interspersed within the connective tissue stroma. The mouse mammary gland epithelium is a tree like system of ducts composed of two layers of cells, an inner layer of luminal cells surrounded by an outer layer of myoepithelial cells denoted by the confines of a basement membrane2. At birth, only a rudimental ductal tree is present, composed of a primary duct and 15-20 branches. Branch elongation and amplification start at the beginning of puberty, around 4 weeks old, under the influence of hormones3,4,5. At 10 weeks, most of the stroma is invaded by a complex system of ducts that will undergo cycles of branching and regression in each estrous cycle until pregnancy2. At the onset of pregnancy, a second phase of development begins, with the proliferation and differentiation of the epithelium to form grape-shaped milk secretory structures called alveoli6,7. Following parturition and throughout lactation, milk is produced by luminal secretory cells and stored within the lumen of alveoli. Oxytocin release, stimulated by a neural reflex induced by suckling of pups, induces synchronized contractions of the myoepithelial cells around the alveoli and along the ducts, allowing milk to be transported through the ducts to the nipple where it becomes available to the pups 8. Mammary gland development, differentiation and function are tightly orchestrated and require, not only interactions between the stroma and the epithelium, but also between myoepithelial and luminal cells within the epithelium9,10,11. Thereby, mutations in many genes implicated in these interactions may impair either ductal elongation during puberty or alveoli formation during early pregnancy, differentiation during late pregnancy and secretory activation leading to lactation12,13. In this article, we describe how to dissect mouse mammary glands and assess their development using whole mounts. We also demonstrate how to evaluate myoepithelial contractions and milk ejection using an ex-vivo oxytocin-based functional assay. The effect of a gene mutation on mammary gland development and function can thus be determined in situ by performing these two techniques in mutant and wild-type control mice.

In a good whole mount, the mammary gland is nicely spread and the epithelium ducts are easily observable (Figure 2A). If the gland is not well-spread, it can lift up in part or totally from the slide when placed in the fixative solution. The gland will then become hard and unusable (Figure 2B). Similarly, if the gland is not well dissected, either some part of the epithelium can be missing (Figure 2C) or remaining parts of the skin or abdominal muscle will interfere with the analysis of the gland (Figure 2D).

For the oxytocin assay, it is important to separate the suckling pups from the dam for the same amount of time on every occasion. In this way, you will make sure that no milk or small amounts of milk is present in the ducts prior to oxytocin exposure, but also that enough milk is present in the alveoli that can be ejected into the ducts by myoepithelial contractions (Figure 3A). If pups are removed too soon, milk can accumulate in the alveoli and in the ducts rendering the effect of oxytocin difficult to monitor (Figure 3B). Alternatively, if the experiment is performed too early after pup removal, milk won't have time to accumulate in the alveoli and oxytocin-induced contractions of myoepithelial cells won't trigger enough milk release into the ducts to be observed (Figure 3C). 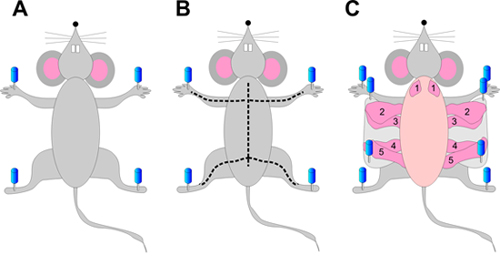 Figure 1. Mouse mammary gland dissection. Pin the mouse on its back by the four limbs (A). Cut the skin first from the belly to the neck. Then make perpendicular incisions from the center of the belly to each limb, as shown by the dotted line (B). Gently peel the skin on the side of the animal and pin it, exposing the mammary glands (C). 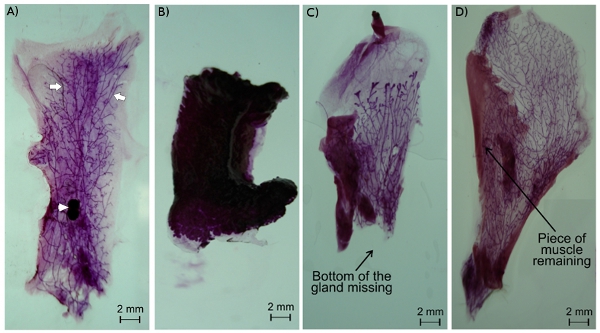 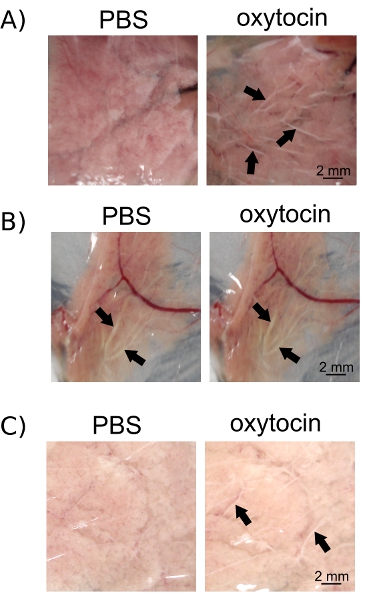 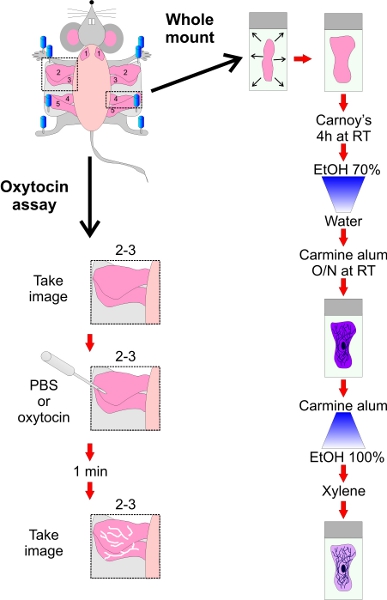 Mammary gland development and function are tightly orchestrated. Mutant mice may harbor gene mutations that can impair mammary gland development and function highlighting the need to evaluate gland architecture13,12. Whole mounting can be performed as described in this article at all stages of mammary gland development. Typically, development of the epithelium is assessed at the beginning of puberty ( ˜4 weeks old), in the middle of puberty ( ˜6 weeks old) and after puberty ( ˜ 10-12 weeks old)2,10. At these stages, the amount of duct branching, the number of terminal end buds and length of the ducts can be determined in order to quantify the degree of gland development14,15. Similarly, alveologenesis (development of the alveoli during pregnancy) is usually determined at 2-3 points during pregnancy; the structural changes that occur during lactation and involution can also be observed and quantified in whole mount gland preparations16. However, quantification of whole mounts from late pregnant and lactating mice can be difficult due to the density of the tissue. It is recommended to combine whole mount with histological analyses, especially for those stages 12. For more detailed histological evaluation, mammary glands can be removed using the same protocol noted in this report, fixed in formalin and subjected to hematoxylin and eosin staining. Whole mount can also be paraffin embedded and used for histology once imaging has been performed. For both techniques, proper and delicate dissection of the mammary glands is crucial. If mutant mice are being assessed, it is important to compare these mice to the closest control mice possible, since different mouse strains can show variable side- or tertiary-ramifications, or alveologenesis 17. For instance, when compared to BALB/c mice, C57BL/6 mice exhibit reduced side branching and alveologenesis 17,18. Therefore, BALB/c mice should not be used as a control for genetically modified mice generated on a C57BL/6 mouse background. While whole mounting provides insight into gross developmental defects, the function of the mammary gland may also need to be evaluated using other complementary techniques.

The main function of the mammary gland is to produce and deliver milk to pups. These processes require not only proper differentiation of secretory luminal cells during pregnancy, but also coordinate and efficient contractions of the myoepithelial cells around the alveoli and along the ducts for milk transport8. While milk production and quality can be evaluated by analytical assessment of milk composition12, among others, the causes of impaired milk delivery to the pups is harder to evaluate. Indeed, the observed absence of milk in the stomachs of newborn pups can be linked to many defects such as impaired milk production, inability of the pups to suckle, behavioral defects of the mother or milk ejection defects. One way of evaluating milk transport and ejection defects from the alveoli into the ducts is to induce myoepithelial contractions using oxytocin, as described in this article. However, quantification of milk transport and ejection is difficult since the effect of oxytocin ex vivo is rapid (usually milk can be observed in the ducts within 1 minute after exposure), even when using low physiological doses of oxytocin10. Thus, a slight difference in the efficiency of milk ejection between two mouse lines might not be observable using this technique. Quantifying this response is difficult but one semi-quantitative way of assessing oxytocin-induced milk ejection is to examine the response under a variety of dosages and to determine the treatment time necessary to fill ducts with milk. . In all cases, consistency of the wait period between the last pup suckling to the beginning of the assay is critical. For a more accurate quantification of lactation or identification of a milk ejection defect, this method can be complemented by the quantification of milk proteins and signaling pathways, such as β-casein and Stat5, respectively, or in vitro myoepithelial cell contraction upon oxytocin exposure19.

In summary, transgenic mouse models are important and widely used for studying mammary gland function and development, and to assess the role of key genes in these processes. The architecture of the mammary gland epithelium can be easily observed in properly excised glands using whole mount at all stages of the development. While lactation defects leading to pups malnutrition can have many origins, a deficiency in milk ejection can be assessed by oxytocin-induced synchronized contraction of myoepithelial cells in situ. Together, these two techniques (Figure 4) can give important insights into the effect of specific gene mutations or deletions on mammary gland development and function.

These studies were funded by CIHR and CBCRA grants to DWL. IP was funded by fellowships from CIHR-STP, FRSQ and CIHR. MKGS was funded by OGS and CIHR-STP scholarships. The authors thank Kevin Barr for his assistance with mouse breeding.