A comprehensive overview of the techniques involved in generating a mouse model of oral cancer and quantitative monitoring of tumor invasion within the tongue through multi-photon microscopy of labeled cells is presented. This system can serve as a useful platform for the molecular assessment and drug efficacy of anti-invasive compounds.

Loco-regional invasion of head and neck cancer is linked to metastatic risk and presents a difficult challenge in designing and implementing patient management strategies. Orthotopic mouse models of oral cancer have been developed to facilitate the study of factors that impact invasion and serve as model system for evaluating anti-tumor therapeutics. In these systems, visualization of disseminated tumor cells within oral cavity tissues has typically been conducted by either conventional histology or with in vivo bioluminescent methods. A primary drawback of these techniques is the inherent inability to accurately visualize and quantify early tumor cell invasion arising from the primary site in three dimensions. Here we describe a protocol that combines an established model for squamous cell carcinoma of the tongue (SCOT) with two-photon imaging to allow multi-vectorial visualization of lingual tumor spread. The OSC-19 head and neck tumor cell line was stably engineered to express the F-actin binding peptide LifeAct fused to the mCherry fluorescent protein (LifeAct-mCherry). Fox1nu/nu mice injected with these cells reliably form tumors that allow the tongue to be visualized by ex-vivo application of two-photon microscopy. This technique allows for the orthotopic visualization of the tumor mass and locally invading cells in excised tongues without disruption of the regional tumor microenvironment. In addition, this system allows for the quantification of tumor cell invasion by calculating distances that invaded cells move from the primary tumor site. Overall this procedure provides an enhanced model system for analyzing factors that contribute to SCOT invasion and therapeutic treatments tailored to prevent local invasion and distant metastatic spread. This method also has the potential to be ultimately combined with other imaging modalities in an in vivo setting. 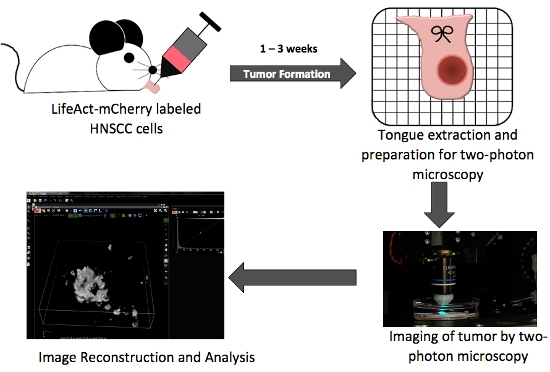 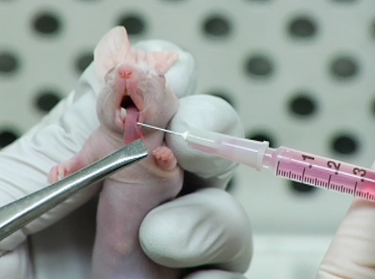 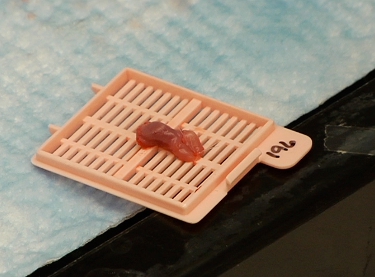 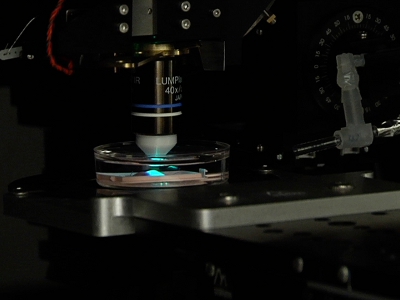 Figure 4. Orientation of a tumor-containing tongue in position on a two photon microscopy ready for imaging. 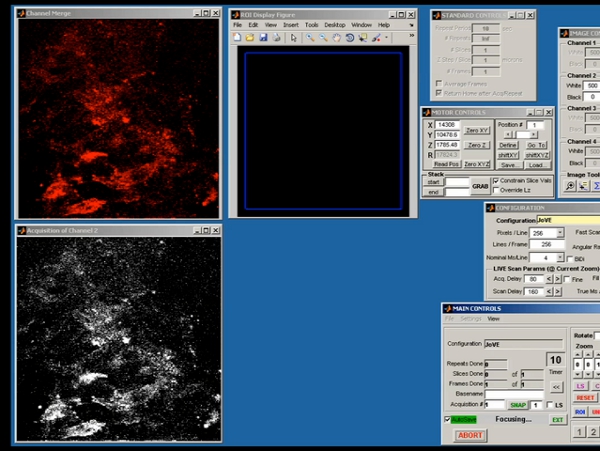 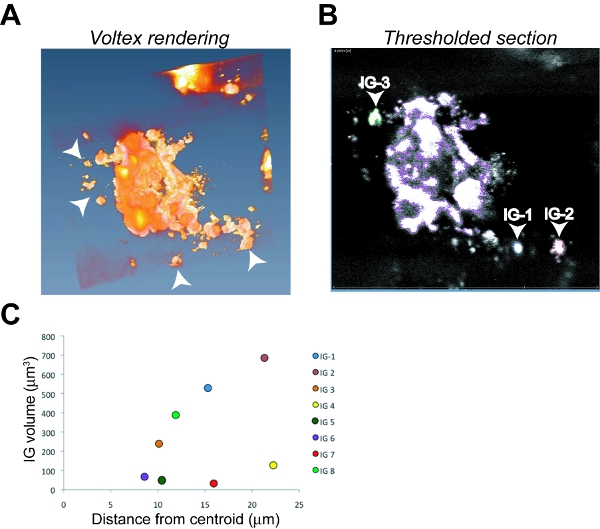 Figure 6. Image analysis and quantification of tumor invasion in an orthotopic OSC19 tumor. Representative screen shot images of Amira Voltex rendering (A) and a single thresholded z-section (B) with the primary primary tumor outlined in purple, invasive group 1 (IG-1) outlined in blue, IG-2 outlined in red and IG-3 outlined in green as an example of the identification procedure. Arrowheads denote IGs in (A) and (B). C. Plots of volume versus invaded distance for eight individual IGs used to calculate the tumor invasion index (Ti).

Figure 7. Representative images of tumors and invaded tumor groups from this protocol compared with images from a conventional IHC approach. A. Paraffin section of an entire mouse tongue harboring a UMSCC1 orthotopic tumor. Immunohistochemical staining was conducted using conventional procedures with a primary antibody against the HNSCC-specific cell marker emmprin (Zymed; cat # 34-5600) at 1:1000 dilution and visualized by using the OmniMap DAB anti-Rb detection kit (Ventana cat # 760-149) followed by iron hematoxylin staining. Images encompassing the total tongue area were collected individually at 4X magnification on an Olympus ZX70 Provis microscope with an Optronics MicroFire CCD camera and reconstructed using the StereoINvestigator imaging package (MBF Bioscience). The tumor is evident at the tongue tip. An enlarged region showing the invasive front and individual tumor cell groups (arrowheads) is shown in (B). C. Nikon NIS-Elements rendering of a representative OSC19 tumor. Enhanced contour detail and clear visualization of IGs (arrowheads) is evident. Bars in all images = 100 μm.

Orthotopic mouse models have proven useful for studying many aspects of head and neck cancer1,2. We have combined a well established orthotopic system of SCOT3 with two-photon microscopy imaging of mCherry-labeled cells as a system to study the early events of head and neck tumor cell invasion. In this procedure, we have noted that cells can leak from the site of tumor injection, especially in mice six weeks or younger due to insufficient tongue size. We use older mice to avoid this issue. The larger tongue size with older mice also aids in avoiding rupture of a lingual artery and excessive hemorrhaging from the tongue. Tumor take is greatly enhanced when the tongue dramatically swells at the site of initial injection. This swelling subsides within one-two hours as the injected fluid is absorbed. Tumor growth appears evident one-two weeks post injection with the indicated injected cell number as a small white bump on the tongue surface. We also note that at the 40X objective used in our studies presented here, we cannot distinguish individual tumor cells but do identify IGs as invasive cell clusters that recapitulate the typical mode of HNSCC invasion.

To date this model has been extensively used for testing the role of specific molecules as well as several anti-tumor drugs on SCOT growth an invasion, with efficacy measured by cervical lymph node metastasis monitored using IHC or bioluminescent methods4-7. Tumors formed in this system manifest close to the tongue surface (Figure 7), allowing the application of two-photon microscopy to image entire tumors in situ as invasive multi-cellular clusters. The procedure can also be utilized to visualize tumor invasion with cellular resolution. Two-photon microscopy has been previously utilized to study experimental treatments for head and neck cancer in orthotopic8,9 and xenograft8,10 models. However, there are two major differences between these reports and our protocol. First, these studies use extracellular labels to target/identify head and neck tumor cells, possibly limiting detection only to tumor cells with ample access to the circulation. Second, invasion of tumor cells close to the primary site that likely recapitulates early metastatic activity was not assessed as an experimental parameter. Our protocol provides the ability to directly quantify tumor cell invasion at any point during tumor progression in mouse tongues. While the method described here describes the procedure using dissected tongues, we are currently in the process of adapting this method to image tumor invasion in live mice for use in combination with bioluminescence to simultaneously monitor early invasion, local lymph node involvement and distant metastasis in the same animal. Alterations to the protocol for in vivo imaging require designing of an appropriate stage for positioning and maintaining mice during imaging, as well as a practical system to properly irrigate the oral cavity of anesthetized mice during the imaging procedure. Once optimized, these adaptations will provide the ability to study the role of potential pro-invasive molecules and the testing anti-invasive compounds on local invasion and more distant metastatic involvement in animals over extended time periods.