Investigations into the pathogenesis of type 2 diabetes and islets of Langerhans malfunction 1 have been hampered by the limited availability of type 2 diabetic islets from organ donors2. Here we share our protocol for isolating islets from human pancreatic tissue obtained from type 2 diabetic and non-diabetic patients who have undergone partial pancreatectomy due to different pancreatic diseases (benign or malignant pancreatic tumors, chronic pancreatitis, and common bile duct or duodenal tumors). All patients involved gave their consent to this study, which had also been approved by the local ethics committee. The surgical specimens were immediately delivered to the pathologist who selected soft and healthy appearing pancreatic tissue for islet isolation, retaining the damaged tissue for diagnostic purposes. We found that to isolate more than 1,000 islets, we had to begin with at least 2 g of pancreatic tissue. Also essential to our protocol was to visibly distend the tissue when injecting the enzyme-containing media and subsequently mince it to aid digestion by increasing the surface area.

To extend the applicability of our protocol to include the occasional case in which a large amount (>15g) of human pancreatic tissue is available , we used a Ricordi chamber (50 ml) to digest the tissue. During digestion, we manually shook the Ricordi chamber3 at an intensity that varied by specimen according to its level of tissue fibrosis. A discontinous Ficoll gradient was then used to separate the islets from acinar tissue. We noted that the tissue pellet should be small enough to be homogenously resuspended in Ficoll medium with a density of 1.125 g/ml. After isolation, we cultured the islets under stress free conditions (no shaking or rotation) with 5% CO2 at 37 °C for at least 48 h in order to facilitate their functional recovery. Widespread application of our protocol and its future improvement could enable the timely harvesting of large quantities of human islets from diabetic and clinically matched non-diabetic subjects, greatly advancing type 2 diabetes research. 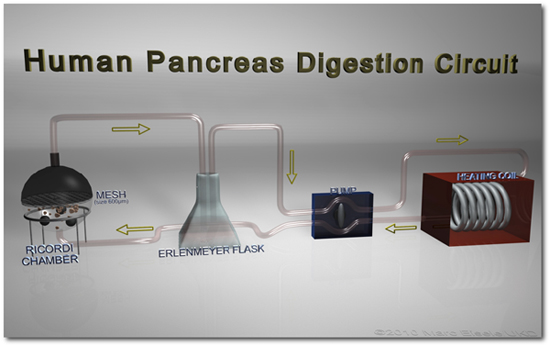 6. Purification on a Ficoll gradient

Our protocol yielded an average of ~500 islets per gram of pancreatic tissue, although this greatly varied between preparations due largely to differences in fibrosis and collagenase activity. We achieved > 90% islet purity by first staining with Dithizone during tissue processing, then handpicking them 24 hours after isolation. To determine the quality of the purified islets, we tested for 25 mM glucose-stimulated insulin secretion under static conditions for 2 hours. We found insulin secretion comparable to that of islets obtained from ECIT islet isolation and transplantation centers. As islets isolated from partially pancreatectomized pancreata are not meant for islet transplantation, assessment of the total IEQ was not considered to be a critical factor.

Importantly, our method enabled us to isolate islets for functional studies from 25 partial pancreatectomized patients between 2005 and 20085. These islets were analyzed for glucose-stimulated insulin secretion and specific protein expression by western blotting and immunohistochemistry. Islets isolated from partially pancreatecomized pancreata could also be used to compare gene and protein expression profiles, ultrastructural appearance and functional responses of non-diabetic and diabetic islets. Because there are more patients undergoing partial pancreatectomy than there are organ donors, our protocol could allow enough samples and data to be collected for robust statistical analysis.

Using our protocol, human islets can be isolated from pancreatic tissue collected from a partial pancreatectomy. The success of this protocol relies on the care taken during a few critical points. To preserve beta-cell viability, it is essential that the specimen be transported rapidly on ice to the laboratory. Additionally, the duration of tissue digestion must be optimized empirically according to the grade of tissue fibrosis and the enzymatic activity of the media. This is also true for the degree of mechanical force applied manually to the Ricordi chamber. Thus to obtain a good islet yield, the protocol is best performed by a dedicated scientist or technical assistant. Initial failure is the norm unless the team is already experienced in islet isolation.

There are key differences between our islet isolation protocol and the standard human islet isolation method: 1) Although we use pancreatic tissue subjected to several hours of ischemia during the surgical procedure, it is immediately processed on site. This is in contrast to pancreata explanted from brain-dead donors for pancreas/islet transplantation, which remain ischemic for several hours during allocation and delivery to the islet isolation facility. 2) We inject collagenase directly into the pancreatic tissue, whereas the standard protocol is to infuse it into the pancreatic duct. 3) We separate the islets using a discontinuous Ficoll gradient instead of collecting the islets from a continuous Ficoll gradient using a COBE cell processor.

In cases where the surgical specimen is too fibrotic or scarce for isolating an adequate number of islets, tissue can still be retrieved by laser capture microdissection (LCM)10. This allows gene expression data to be recovered from virtually every specimen, even if the islet isolation fails or the yield is very low. Unfortunately, LCM does not produce living cells for functional studies and their amount is typically insufficient for proteomic analysis. Thus, using LCM in parallel with our collagenase digestion protocol to retrieve the islets may be the most effective way to process surgical specimens.

When collecting tissue for islet isolation from partial pancreatectomies, it is important to carefully examine the patient’s clinical history and metabolic state. A partially pancreatectomized patient could be affected by type 3c diabetes, i.e. diabetes secondary to the pancreatic disorder leading to surgery6. Among the 43 participating patients who underwent this surgery in our department in 2010, 32 were non-diabetic, 5 were affected by type 2 diabetes and 6 had type 3c diabetes. These data agree with previous studies pointing to impaired glucose metabolism and diabetes in a sizeable fraction of patients suffering from pancreatic cancer or chronic pancreatitis6. We considered diabetes to be of primary origin if it was diagnosed at least one year prior to the onset of symptoms leading to pancreatic surgery7. The levels of antibodies against islet autoantigens should also be measured to evaluate a potential autoimmune origin of the diabetes8. Because a patient undergoing pancreatectomy could suffer from undiagnosed diabetes or be glucose intolerant, all non-diabetic patients should be given an oral glucose tolerance test prior to the pancreatectomy9.

We want to thank our many colleagues who provided help, advice and critical input at various stages of the project. Production of this video article was supported with funds from the German Ministry for Education and Research (BMBF) to the German Centre for Diabetes Research (DZD, http://www.dzd-ev.de), IMIDIA (http://www.imidia.org) and the University Hospital Carl Gustav Carus at the University of Technology Dresden. The research leading to these results has received funding from the European Community's Seventh Framework Programme (FP7/2007-2013) for the Innovative Medicine Initiative under grant agreement n° 115005.