Recently, a vast amount of prospects have come available for human-robot interactive systems. In this paper we outline the integration of a new robotic device with open source software that can rapidly make possible a library of interactive functionality. We then outline a clinical application for a neurorehabilitation application.

Recent research that tests interactive devices for prolonged therapy practice has revealed new prospects for robotics combined with graphical and other forms of biofeedback. Previous human-robot interactive systems have required different software commands to be implemented for each robot leading to unnecessary developmental overhead time each time a new system becomes available. For example, when a haptic/graphic virtual reality environment has been coded for one specific robot to provide haptic feedback, that specific robot would not be able to be traded for another robot without recoding the program. However, recent efforts in the open source community have proposed a wrapper class approach that can elicit nearly identical responses regardless of the robot used. The result can lead researchers across the globe to perform similar experiments using shared code. Therefore modular "switching out"of one robot for another would not affect development time. In this paper, we outline the successful creation and implementation of a wrapper class for one robot into the open-source H3DAPI, which integrates the software commands most commonly used by all robots.

There is a growing need in all of human-machine interaction (HMI) for intuitive and efficient interactive environments. Numerous industries continue to depend more heavily on HMI, such as: rehabilitation robotics, the automotive industry, metals manufacturing, packaging machinery, pharmaceuticals, food, beverage, and utilities. Technologies employed in these industries include: display terminals, personal computers, and HMI software. These technologies may be combined together to perform unlimited functions.

Robots may be used to facilitate direct interaction with users, such as serving as a music instructor. For example, researchers at Waseda University have created a robot that plays the saxophone to teach people how to play and to understand the interaction between student and teacher 1. Other robotics researchers have made a vision-based flying robot in order to determine how artificial intelligence may evolve into intelligent interactions with the environment 2. The particular concentration of this paper resides within rehabilitation robotics.

Within the realm of research and industry, the quick pace of change for new products and user requirements continues to grow. These demands impose greater challenges in scalability. Therefore code design has become integral in meeting the needs of these entities in a timely manner. Hence, the quality of a strong architectural candidate would include easily interchangeable graphic-robot systems that include driver support. The H3DAPI architecture meets these needs and thus a wrapper class has been created. Furthermore, H3D is designed for virtual reality environments, such as those needed in rehabilitation robotics.

Neural rehabilitation robotics seeks to utilize robots for the purpose of assisting rehabilitation professionals. The assistance that these robots provide comes in the form of a force-field. Passed motor command researchers such as Shadmehr and Mussa-Ivaldi, used force-fields to foster motor adaptation, and have found 1) adaptation to an externally applied force field occurs with different classes of movements including but not limited to reaching movements, and 2) adaptation generalizes across different movements that visit the same regions of the external field3. Research from biomechanical engineers in Performance-Based Progressive Robot-Assisted therapy shows that repetitive, task-specific, goal-directed, robot-assisted therapy is effective in reducing motor impairments in the affected arm after stroke4, but the exact therapeutic effects and parameters continue to be a field of research.

Sensory feedback affects learning and adaptation. Therefore the next logical question would be to ask whether or not artificially increasing the magnitude of such feedback would promote faster or more complete learning/adaptation. Some researchers have found that applying greater sensory feedback forces or visual cues to enhance mistakes can provide an adequate neurological stimulus to promote higher levels of adaptation/learning5,6. This is known as "error augmentation". This phenomenon may be due to the fact that once outcomes of a motor control action deviate from the ideal, our internal model self-adjusts according to the magnitude of error. Consequently, as our internal model approaches the external environment, error in the execution of a task decreases.

Research continues to support prolonged practice of functionally relevant activities for restoration of function, although many current health care policies limit the amount of time patients can spend time with therapists. The compelling question is whether these new applications of technology can go further than simply giving a higher dosage of the current state of care. Human-machine interaction studies have revealed new prospects in the areas of motor learning, and can in some cases offer added value to the therapeutic process. Specialized robotic devices combined with computer-displays can augment feedback of error in order to speed up, enhance, or trigger motor relearning. This paper will present a methodology of using a developed system for a clinical intervention as one such example of the application of this technology.


Note: extern "C" is required to resolve compiler mangling, because the included library is written in 'C' and the H3DAPI is written in C++.

5. Application: rehabilitation of the stroke patient

When the protocol is done correctly, then once the <AnyDevice> node is loaded into the H3DViewer or H3DLoad, the WAM device should be recognized and initiated. If the WAM were replaced with another robot, the code itself would not need to be changed. 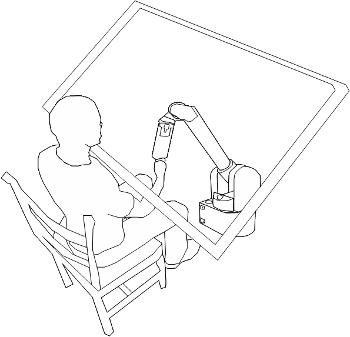 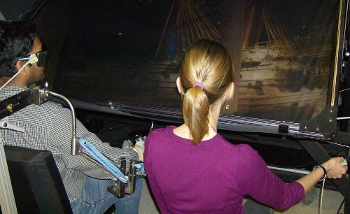 Figure 2. Subject seated at the haptic/graphic apparatus with physical therapist.

Figure 3. Configuration for rehabilitation of the stroke patient. A) subject and therapist working together, seated and using the large-workspace haptic/graphic display to practice movement. The Therapist provides a cue for the subject, and can tailor conditioning to the needs of the patient. The robot provides forces that push the limb away from the target and the visual feedback system enhances the error of the cursor. B) Typical chronic stroke patient improvement from day to day. Each dot represents the median error measured for a 2-minute block of stereotypical functional movement. While the patient shows progress across the 2-week period and overall benefit, this person did not always improve each day.

This method of wrapper class implementation allows for different robots to be used, without changing the source code, when using the H3DAPI. Specifically, researchers who have written their haptic/graphic environment in H3D and tested their experiment with a phantom robot would be able to carry out the same or similar experiment using the Barrett WAM, and vice versa. This type of device independent cross-communication carries implications for international rehabilitation robotics research. Such implications facilitate rapid haptic/graphic development, international research collaboration, and inter-research lab communication.

Rehabilitation robotics has yet to uncover the numerous parameters involved in motor learning. One of the time consuming steps during haptic/graphics development includes compilation time. With numerous rehabilitation parameters, compounded with the compilation time for each program, the development life cycle to test all possible group permutations rises rapidly. H3D, with its absence of compilation requirements, allows for quick development of numerous virtual reality scenes. This comes as an advantage for those researchers aspiring to probe the effects of various training scenarios.

The wrapper classes in this tutorial are under copyright by Ian Sharp.

I would like to acknowledge the technical help of Brian Zenowich, Daniel Evestedt and Winsean Lin.