With the exception of survival, cognitive impairment stemming from the clinical management of cancer is a major factor dictating therapeutic outcome. For many patients afflicted with CNS and non-CNS malignancies, radiotherapy and chemotherapy offer the best options for disease control. These treatments however come at a cost, and nearly all cancer survivors (~11 million in the US alone as of 2006) incur some risk for developing cognitive dysfunction, with the most severe cases found in patients subjected to cranial radiotherapy (~200,000/yr) for the control of primary and metastatic brain tumors1. Particularly problematic are pediatric cases, whose long-term survival plagued with marked cognitive decrements results in significant socioeconomic burdens2. To date, there are still no satisfactory solutions to this significant clinical problem.

We have addressed this serious health concern using transplanted stem cells to combat radiation-induced cognitive decline in athymic rats subjected to cranial irradiation3. Details of the stereotaxic irradiation and the in vitro culturing and transplantation of human neural stem cells (hNSCs) can be found in our companion paper (Acharya et al., JoVE reference). Following irradiation and transplantation surgery, rats are then assessed for changes in cognition, grafted cell survival and expression of differentiation-specific markers 1 and 4-months after irradiation. To critically evaluate the success or failure of any potential intervention designed to ameliorate radiation-induced cognitive sequelae, a rigorous series of quantitative cognitive tasks must be performed. To accomplish this, we subject our animals to a suite of cognitive testing paradigms including novel place recognition, water maze, elevated plus maze and fear conditioning, in order to quantify hippocampal and non-hippocampal learning and memory. We have demonstrated the utility of these tests for quantifying specific types of cognitive decrements in irradiated animals, and used them to show that animals engrafted with hNSCs exhibit significant improvements in cognitive function3.

The cognitive benefits derived from engrafted human stem cells suggest that similar strategies may one day provide much needed clinical recourse to cancer survivors suffering from impaired cognition. Accordingly, we have provided written and visual documentation of the critical steps used in our cognitive testing paradigms to facilitate the translation of our promising results into the clinic.

Our cognitive testing paradigms are schematically diagrammed in Figure 1. Cognitive testing is initiated one month after irradiation and surgical procedures are performed. 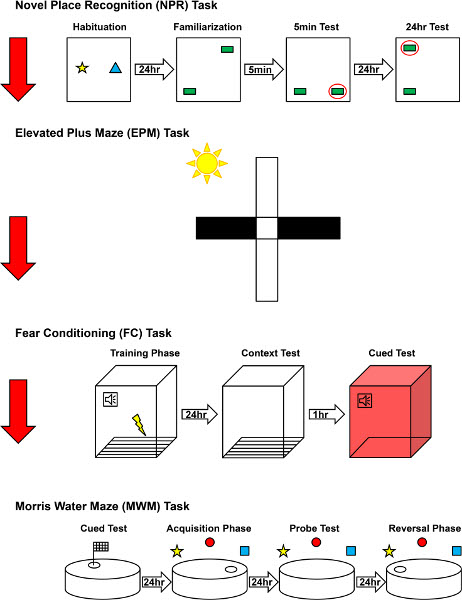 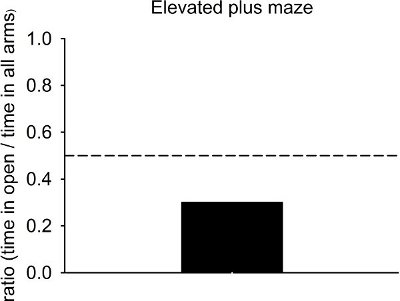 Figure 3. Representative results from control animals on the elevated plus maze. Normal animals spend less time than expected by chance in the open arms (indicated by the dashed line). Anxious animals will spend proportionately less time in the open arms compared to controls, whereas multiple exposures to the maze or treatment with anxiolytic agents will increase time spent in the open arms. 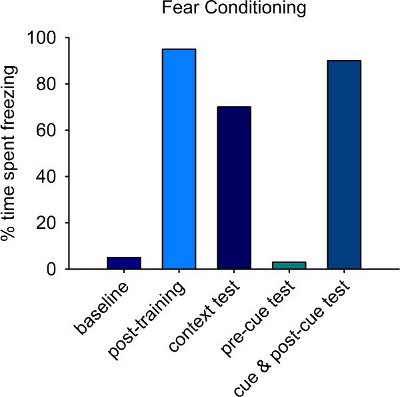 Figure 4. Representative results from control animals on the fear conditioning task. Low levels of freezing are observed during initial exposure to the chamber (baseline), and when the context is altered prior to the cue test (pre-cue test). By contrast, normal animals spend most of the post-training period engaged in freezing behavior. If animals remember the context in which training occurred following a 24hr delay, they will engage in freezing behavior for approximately 70% of the 5-minute context trial. Similarly, if animals remember the tone, they show high levels of freezing during the cue and post-cue test. 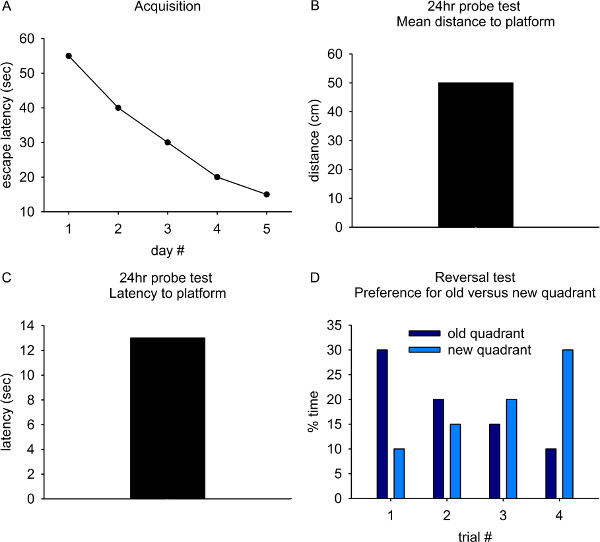 Figure 5. Representative results from control animals on the Morris Water Maze task. A) Escape latency decreases with progressive training during the acquisition phase. B) and C) Mean distance from and latency to first cross the previous platform location during the 24hr probe test are used as measures of spatial reference memory. D) Reversal learning is assessed by changing the location of the platform on the last day of testing. Over the 4 trials, normal animals gradually stop searching the old quadrant and learn that the platform is in a new location.

There is a pressing need for long-term strategies designed to forestall the development of cognitive dysfunction that is becoming increasingly common in cancer survivors12,13. Stem cell therapies may provide the means for ameliorating a range of normal tissue sequelae in the CNS, as they provide the opportunity for replacing cells lost or damaged from cytotoxic cancer treatments14. To hasten the realization of these efforts, we have undertaken a series of proof of principal experiments that have confirmed the capability of cranially engrafted hNSCs to functionally restore cognition within the irradiated tissue bed of the CNS3. Critical to this endeavor was the capability to reliably conduct a series of carefully controlled cognitive tests in a reproducible manner. We have detailed these critical procedures in efforts to expedite the translational potential of stem cell therapies in the clinic. Further considerations that are likely to have a significant impact of the quality of data are highlighted below.

Cognitive testing demands careful attention to detail and adhering to certain standard practices can help minimize artifacts that complicate the interpretation of results. The use of dedicated behavioral testing rooms separate from animal holding rooms and experimenters is preferable. It is also prudent to use "white noise" that blocks external noises in the animal facility that may distract animals from the task at hand. To minimize stress to the animals destined for cognitive testing, it is important for them to be familiar with the experimenters that will perform behavioral testing prior to task administration. In general, if testing females and males, it is recommended to test females first as they tend to be more anxious during testing if male odor cues remain in the testing arenas. When administering a serial battery of tasks, it is important to expose animals to least stressful tasks first (like EPM, NPR) and most stressful tasks last (like FC, MWM).

This work was supported by NIH NINDS grant R01 NS074388 581 (C.L. Limoli), California Institute for Regenerative Medicine (CIRM) Grant RS1-00413 (C.L.L.) and a CIRM Grant to JOVE in support of the video documentation. We would also like to thank Rudy Limburg and Edward Lau of University of California, Irvine’s Biological Sciences Machine Shop for their advice, support and superb technical skills in preparation of all custom-made materials used for behavioral testing.