In this article we demonstrate the isolation of murine resident lung mesenchymal stem cells (lung MSC), their expansion, characterization and analysis of immunomodulatory properties.

Tissue resident mesenchymal stem cells (MSC) are important regulators of tissue repair or regeneration, fibrosis, inflammation, angiogenesis and tumor formation. Taken together these studies suggest that resident lung MSC play a role during pulmonary tissue homeostasis, injury and repair during diseases such as pulmonary fibrosis (PF) and arterial hypertension (PAH). Here we describe a technology to define a population of resident lung MSC. The definition of this population in vivo pulmonary tissue using a define set of markers facilitates the repeated isolation of a well-characterized stem cell population by flow cytometry and the study of a specific cell type and function.

2. Preparation of a Single Cell Suspension from Lung Tissue

3. Staining and Preparation of the Lung Cell Suspension for Flow Cytometry Analysis

5. Isolation, Culture and Characterization of lung MSC and Clones

7. Analysis of the Immunomodulatory Properties of lung MSC on T-cell Proliferation and Apoptosis

Figure 1. Flow cytometric analysis and Definition of Lung MSC. Single cell suspensions of lung tissue digest are stained with Hoechst 33342 and analyzed by flow cytometry to detect differences in A. forward scatter (FSC) and side scatter (SSC) and B. Hoechst blue and red fluorescence. The presence of a side population (SP) is visible in the gate. The Hoechstlow SP is then analyzed to separate the C. CD45negative population of lung MSC. The CD45 positive to negative ratios of lung SP are typically 70:30 / 60:40. 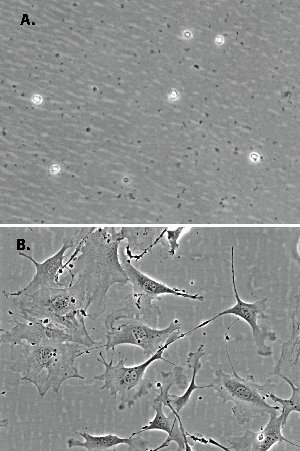 Figure 2. Isolation and Culture of Lung MSC. Following collection of the lung MSC by cell sorting, the cells are plated in 30mm dishes using α-MEM supplemented with 20% FBS. A. Freshly sorted cells appear small, round and bright. B. After approximately 2-3 weeks colonies with a mesenchymal phenotype become evident and proliferation is more obvious.

Figure 3. Enumeration of MSC by Colony Forming-Fibroblast Assay. Expanded lung MSC are plated per the described protocol for the CFU-F assay. A. After 10 days and Giemsa stain colonies are evident. B. Colonies are large and comprised of a few hundred cells. C. The cells display a mesenchymal phenotype. A & B, Scale bar =0.5 cm; C Scale bar = 0.14 cm. 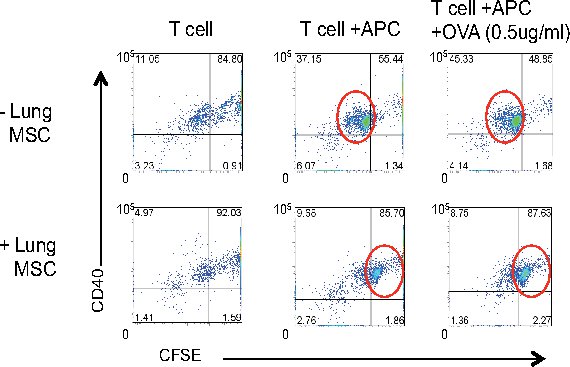 We have adapted a method initially used to identify BM hematopoietic cells to isolate a specific population of resident lung MSC. Due to the reproducibility of isolation these cells were then well characterized as MSC. Their origin has been defined as resident in the adult mouse lung (as opposed to BM derived) and a phenotypic and molecular profile documented 2. The ability to repeatedly isolate this characterized population allows the further study of the biological importance and role of the lung MSC during tissue homeostasis and disease. The recent definition of this population in vivo in both murine and human pulmonary tissue facilitates the development of a therapeutic strategy directed at the rescue of endogenous cells to facilitate lung repair during injury and disease.