Here we describe a method to quantify molecular heterogeneity in histological sections of tumor material using quantitative immunofluorescence, image analysis, and a statistical measure of heterogeneity. The method is intended for use in clinical biomarker development and analysis.

Morphologic heterogeneity within an individual tumor is well-recognized by histopathologists in surgical practice. While this often takes the form of areas of distinct differentiation into recognized histological subtypes, or different pathological grade, often there are more subtle differences in phenotype which defy accurate classification (Figure 1). Ultimately, since morphology is dictated by the underlying molecular phenotype, areas with visible differences are likely to be accompanied by differences in the expression of proteins which orchestrate cellular function and behavior, and therefore, appearance. The significance of visible and invisible (molecular) heterogeneity for prognosis is unknown, but recent evidence suggests that, at least at the genetic level, heterogeneity exists in the primary tumor1,2, and some of these sub-clones give rise to metastatic (and therefore lethal) disease.

Moreover, some proteins are measured as biomarkers because they are the targets of therapy (for instance ER and HER2 for tamoxifen and trastuzumab (Herceptin), respectively). If these proteins show variable expression within a tumor then therapeutic responses may also be variable. The widely used histopathologic scoring schemes for immunohistochemistry either ignore, or numerically homogenize the quantification of protein expression. Similarly, in destructive techniques, where the tumor samples are homogenized (such as gene expression profiling), quantitative information can be elucidated, but spatial information is lost. Genetic heterogeneity mapping approaches in pancreatic cancer have relied either on generation of a single cell suspension3, or on macrodissection4. A recent study has used quantum dots in order to map morphologic and molecular heterogeneity in prostate cancer tissue5, providing proof of principle that morphology and molecular mapping is feasible, but falling short of quantifying the heterogeneity. Since immunohistochemistry is, at best, only semi-quantitative and subject to intra- and inter-observer bias, more sensitive and quantitative methodologies are required in order to accurately map and quantify tissue heterogeneity in situ.

We have developed and applied an experimental and statistical methodology in order to systematically quantify the heterogeneity of protein expression in whole tissue sections of tumors, based on the Automated QUantitative Analysis (AQUA) system6. Tissue sections are labeled with specific antibodies directed against cytokeratins and targets of interest, coupled to fluorophore-labeled secondary antibodies. Slides are imaged using a whole-slide fluorescence scanner. Images are subdivided into hundreds to thousands of tiles, and each tile is then assigned an AQUA score which is a measure of protein concentration within the epithelial (tumor) component of the tissue. Heatmaps are generated to represent tissue expression of the proteins and a heterogeneity score assigned, using a statistical measure of heterogeneity originally used in ecology, based on the Simpson's biodiversity index7.

To date there have been no attempts to systematically map and quantify this variability in tandem with protein expression, in histological preparations. Here, we illustrate the first use of the method applied to ER and HER2 biomarker expression in ovarian cancer. Using this method paves the way for analyzing heterogeneity as an independent variable in studies of biomarker expression in translational studies, in order to establish the significance of heterogeneity in prognosis and prediction of responses to therapy.

5. Statistical Analysis: All statistical analyses are performed in SPSS (IBM)

Targeted therapy with relatively low toxicity agents, such as tamoxifen and trastuzumab, are not standard of care for ovarian cancer patients. There is good evidence that platinum-taxane first-line chemotherapy is superior to other chemotherapy regimens for ovarian cancer9-13, and while 70-80% of patients initially respond, most will relapse and die of their disease. Measurement of biomarkers which might predict response to alternative therapies would be useful in selecting individualized therapy for each patient, and since chemotherapy exerts selection pressure on a tumor, surviving tumor cells may possess different characteristics and represent a subpopulation of the tumor before therapy; quantifying this change might therefore be useful. We applied our heterogeneity mapping approach to ER and HER2 expression in ovarian cancer specimens before and after chemotherapy, in order to measure quantitative changes in expression, and assess the relationship between biomarker expression before and after therapy. Both ER and HER2 demonstrate marked heterogeneity within individual tumors, and in some tumors, the Simpson's index changes after therapy from relatively high heterogeneity to low heterogeneity, represented by decreasing Simpson's index scores (see Figures 2 and 3). This supports the notion that clonal selection occurs in response to cytotoxic chemotherapy; more importantly, this may be exploited using targeted therapy against the residual population, in order to better personalize therapy for cancer patients. 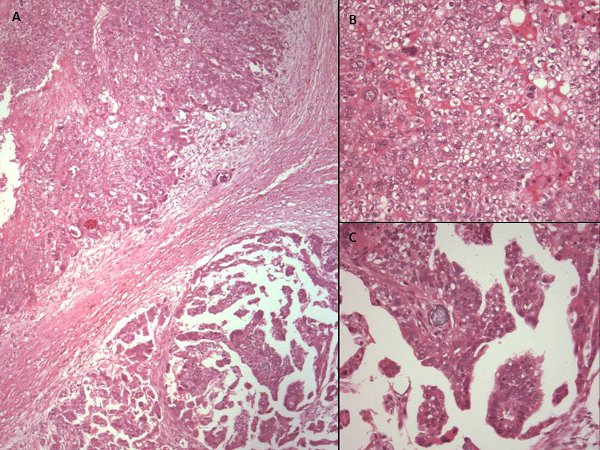 Figure 1. Hematoxylin and eosin stained photomicrographs of different areas of the same ovarian cancer showing variable morphology. (A) x40 photomicrograph shows two adjacent areas of tumor with varying morphology. High power views (x200) reveal cells with cytoplasmic clearing and a solid pattern of growth in the upper part of the tumor (B), while the lower part of the tissue (C) has more homogeneous eosinophilic cytoplasm and a papillary growth pattern. This tumor would, however, be classified as serous papillary histological subtype for the purposes of further management. 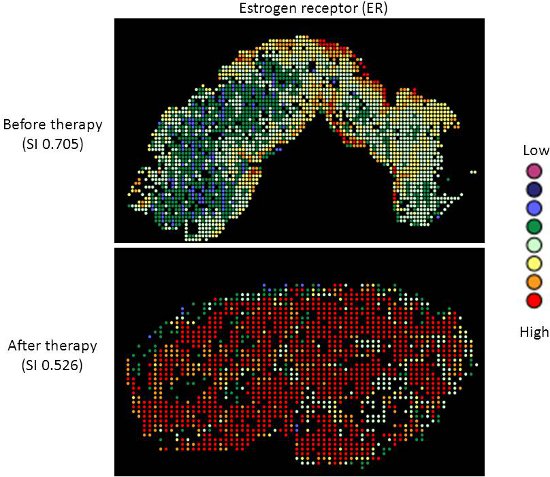 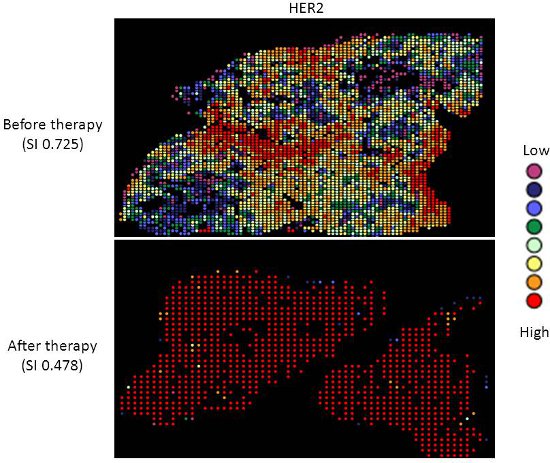 Figure 3. Heterogeneity heatmaps of HER2 protein expression in cytokeratin-positive ovarian cancer tissue, before (upper panel) and after (lower panel) therapy.

The method described herein permits quantification of molecular heterogeneity in standard formalin-fixed, paraffin-embedded histologic sections of tumor material. The method permits a value to be assigned to the degree of heterogeneity in a tissue section, so that this may then be taken into account as a variable in biomarker development and analysis. While in general it is preferable that tissue biomarkers are homogeneous with respect to expression, so that the assay is less susceptible to sampling error or bias, it might under some circumstances be useful to quantify heterogeneity as a parameter. For instance, as shown in the illustrative example for ER and HER2, common biomarkers show considerable heterogeneity of expression and it is currently unknown whether this represents an independent prognostic or predictive factor with respect to clinical outcome or response to therapy, respectively. Likewise, as illustrated, therapy itself might dynamically alter the constituent populations of cells, and therefore measurement of target enrichment might be useful in guiding treatment decisions.

However, the technique is limited by the same factors which limit traditional histopathological or biomarker (such as immunohistochemical) analyses. The result is dependent on the type, size, and quality of the tissue being analyzed, and therefore a single tissue section may not be representative of the entire tumor. Indeed, the Simpson's index may be unduly biased by size of the tissue (number of frames captured and AQUA scores measured). The immunogenicity of the epitopes being measured may be subject to uncontrollable pre-analytical factors which artifactually alter their expression across the tissue section (such as cold ischemia time, or the length of fixation, and edge artifact). This is particularly a problem for phospho-epitopes, which are notoriously labile14, 15. Therefore the technique might be better suited to resection specimens rather than small biopsies, and performed on multiple sections rather than just one. Ultimately, 3D imaging techniques may offer an opportunity to better quantify this parameter.

The technique as presented may also be limited by biological factors, such as variability in expression of the cytokeratin masking epitope. This might be of particular concern in those cancers, including ovarian and breast cancer, which undergo epithelial-to-mesenchymal transition (EMT) or are enriched for non-epithelial components or stem cells16, as has recently been shown to occur in chemotherapy-treated ovarian cancer in vitro17, and in breast cancer patients in response to therapy18. This limitation may be overcome using alternative masking antibodies (or cocktails of antibodies), such as cytokeratin plus vimentin, which is upregulated in EMT16. In addition, since other components of the tissue (the microenvironment), such as fibroblasts or vascular endothelial cells are also increasingly being targeted by biological therapies, the technique may also be expanded to to score these components, using specific masks for compartments of interest, such as PECAM/ CD31 to stain for vascular endothelial cells.

Although the adaptation of the Simpson's index has been used as a measure of heterogeneity in the current protocol due to its simplicity, other measures of heterogeneity could be used, such as simple measurements of central tendency (mean, variance, median, etc). Additionally, the Simpson's index calculations could be modified to better suit a particular test population. The use of Z-score transformations allows the scoring to be more applicable for multiple markers since the heterogeneity is based on deviation around the mean for a data set. However, the overall range of scoring can be limited in this type of transformation. Some designs may be better suited to simply bin the actual AQUA scores for all samples of a particular marker set. The selection of the number of bins and cutoffs is also a limitation in the range of values which can result and may be optimized for alternative experimental designs.

We have used ER and HER2 in the current study as candidate biomarkers, since they are already used in the clinic, help answer relevant clinical questions with respect to the efficacy of targeted therapies, and are known to exhibit considerable heterogeneity and change in primary and distant disease19. However, the optimal marker of heterogeneity remains to be determined. Other possibilities might include cytogenetic markers of clonality, such as those previously used in interphase FISH studies20. The approach requires further validation in large, well annotated clinical cohorts or clinical trials in order to further establish the relevance of this parameter in cancer biology.

JC, MG, CJ, and CS are employees of HistoRx, Inc.