This article presents the protocols of intrinsic optical signals and flavoproteins autofluorescence signals imaging to map odor-evoked activities at the surface of the olfactory bulb in mice.

In the brain, sensory stimulation activates distributed populations of neurons among functional modules which participate to the coding of the stimulus. Functional optical imaging techniques are advantageous to visualize the activation of these modules in sensory cortices with high spatial resolution. In this context, endogenous optical signals that arise from molecular mechanisms linked to neuroenergetics are valuable sources of contrast to record spatial maps of sensory stimuli over wide fields in the rodent brain.

Here, we present two techniques based on changes of endogenous optical properties of the brain tissue during activation. First the intrinsic optical signals (IOS) are produced by a local alteration in red light reflectance due to: (i) absorption by changes in blood oxygenation level and blood volume (ii) photon scattering. The use of in vivo IOS to record spatial maps started in the mid 1980's with the observation of optical maps of whisker barrels in the rat and the orientation columns in the cat visual cortex1. IOS imaging of the surface of the rodent main olfactory bulb (OB) in response to odorants was later demonstrated by Larry Katz's group2. The second approach relies on flavoprotein autofluorescence signals (FAS) due to changes in the redox state of these mitochondrial metabolic intermediates. More precisely, the technique is based on the green fluorescence due to oxidized state of flavoproteins when the tissue is excited with blue light. Although such signals were probably among the first fluorescent molecules recorded for the study of brain activity by the pioneer studies of Britton Chances and colleagues3, it was not until recently that they have been used for mapping of brain activation in vivo. FAS imaging was first applied to the somatosensory cortex in rodents in response to hindpaw stimulation by Katsuei Shibuki's group4.

The olfactory system is of central importance for the survival of the vast majority of living species because it allows efficient detection and identification of chemical substances in the environment (food, predators). The OB is the first relay of olfactory information processing in the brain. It receives afferent projections from the olfactory primary sensory neurons that detect volatile odorant molecules. Each sensory neuron expresses only one type of odorant receptor and neurons carrying the same type of receptor send their nerve processes to the same well-defined microregions of ˜100μm3 constituted of discrete neuropil, the olfactory glomerulus (Fig. 1). In the last decade, IOS imaging has fostered the functional exploration of the OB5, 6, 7 which has become one of the most studied sensory structures. The mapping of OB activity with FAS imaging has not been performed yet.

Here, we show the successive steps of an efficient protocol for IOS and FAS imaging to map odor-evoked activities in the mouse OB.

1. Preparing the animal for imaging (in accordance with European recommendations for care and use of laboratory animals, 86/609/EEC directive) 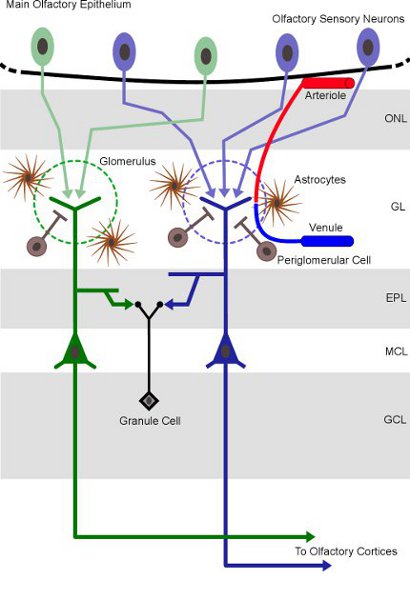 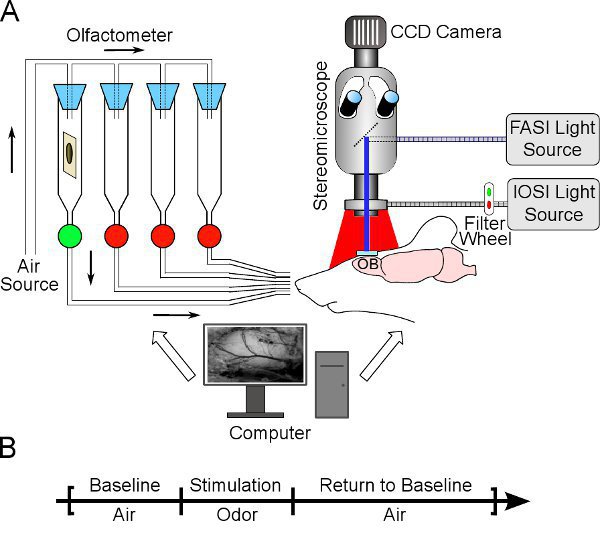 Figure 2 Reflectance and fluorescence signals recording in vivo. A. Wide-field optical imaging setup. The brain of an anesthetized mouse is exposed to either red (IOS) or blue (FAS) light through either an annular fiber ring attached to the optics lens or an epi-illumination port of a microscope. Odors are loaded into sealed vials and odorized air is delivered to the animal nose (green light: open valve). B. Recording protocol and data processing. IOS and FAS are recorded as series of individual trials (90s of duration). The diagram shows the timeline of a single trial: baseline varies from 5 to 10s, stimulation from 3 to 10s, and return to baseline from 70 to 82s. Image processing requires pixel-by-pixel subtraction of intensity values during the baseline to intensity values during periods of stimulation (for FAS) or stimulation plus return to baseline (for IOS). This difference is then divided by baseline values to obtain a variation in % (see resulting images in Fig. 3). 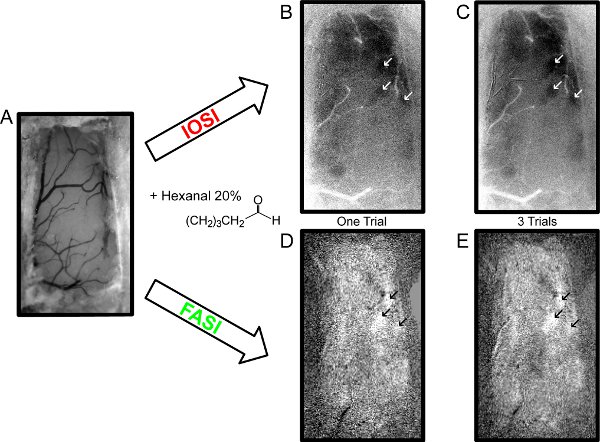 In this article we present IOS and FAS imaging techniques for in vivo recordings of odor-evoked activities in the mouse OB. To achieve this goal a relatively simple and affordable wide-field optical imaging setup is necessary. The acquisition of imaging data requires training to perform the fine surgical procedures and avoid any injury to the dura or brain tissue. In particular, major bleeding will absorb photons recorded for imaging and end up the experiment.

One benefit of IOS and FAS imaging is to avoid the injection of fluorescent tracers that could result in cellular toxicity or undesired side effects. They make it possible to tackle issues about olfactory maps thus spatial coding of sensory stimuli. Contrary to 2-DeoxyGlucose imaging, they provide the possibility to image several odors in a single animal. However, since photon penetration is limited in the tissue, IOS and FAS are restricted to the dorsal part of the OB and can not be recorded from ventral regions.

Endogenous optical signal imaging offers excellent spatial resolution for in vivo imaging. Technical improvements concern quantitative calculations of vascular components in the reflectance signals8,9 as well as dynamics of blood oxygenation and volume during sensory activation10. Multiwavelength imaging of IOS imaging approaches are currently developed in our laboratory to fully quantify total hemoglobin concentration and oxygenation in the OB during sensory activation. These spectroscopic optical measurements added to FAS imaging will give the opportunity to answer the unsolved relationship between vascular and intracellular dynamics during sensory activation11,12.

This work was supported by the "Agence Nationale de la Recherche" grant ANR-09-JCJC-0117-01 and "Neuropôle de Recherche Francilien-NERF" grant for Romain Chery. We thank Françoise Lefebvre for the software development in C++/Qt, and Laurent Pinot and Batiste Janvier for help in the development of the optical imaging setup.