Phenotypic variation for traits can result from mutations in cis-regulatory element (CRE) sequences that control gene expression patterns. Methods derived for use in Drosophila melanogaster can quantitatively compare the levels of spatial and temporal patterns of gene expression mediated by modified or naturally occurring CRE variants.

Gene expression patterns are specified by cis-regulatory element (CRE) sequences, which are also called enhancers or cis-regulatory modules. A typical CRE possesses an arrangement of binding sites for several transcription factor proteins that confer a regulatory logic specifying when, where, and at what level the regulated gene(s) is expressed. The full set of CREs within an animal genome encodes the organism′s program for development1, and empirical as well as theoretical studies indicate that mutations in CREs played a prominent role in morphological evolution2-4. Moreover, human genome wide association studies indicate that genetic variation in CREs contribute substantially to phenotypic variation5,6. Thus, understanding regulatory logic and how mutations affect such logic is a central goal of genetics.

Reporter transgenes provide a powerful method to study the in vivo function of CREs. Here a known or suspected CRE sequence is coupled to heterologous promoter and coding sequences for a reporter gene encoding an easily observable protein product. When a reporter transgene is inserted into a host organism, the CRE′s activity becomes visible in the form of the encoded reporter protein. P-element mediated transgenesis in the fruit fly species Drosophila (D.) melanogaster7 has been used for decades to introduce reporter transgenes into this model organism, though the genomic placement of transgenes is random. Hence, reporter gene activity is strongly influenced by the local chromatin and gene environment, limiting CRE comparisons to being qualitative. In recent years, the phiC31 based integration system was adapted for use in D. melanogaster to insert transgenes into specific genome landing sites8-10. This capability has made the quantitative measurement of gene and, relevant here, CRE activity11-13 feasible. The production of transgenic fruit flies can be outsourced, including phiC31-based integration, eliminating the need to purchase expensive equipment and/or have proficiency at specialized transgene injection protocols.

Here, we present a general protocol to quantitatively evaluate a CRE′s activity, and show how this approach can be used to measure the effects of an introduced mutation on a CRE′s activity and to compare the activities of orthologous CREs. Although the examples given are for a CRE active during fruit fly metamorphosis, the approach can be applied to other developmental stages, fruit fly species, or model organisms. Ultimately, a more widespread use of this approach to study CREs should advance an understanding of regulatory logic and how logic can vary and evolve.

1. Site-specific integration of reporter transgenes into the Drosophila melanogaster genome

B. Site-specific integration of reporter transgenes

2. Obtaining specimens or tissues of the appropriate developmental stage

Obtain specimens for analysis at the time in development when the gene expression pattern(s) of interest occur(s) endogenously, hence the time when the CRE under investigation should activate reporter gene expression. For Drosophila, this can be either embryonic, larval, pupal or adult stages. Below we describe a method to stage adult and metamorphic flies; the latter of which takes place inside the puparium, a hard larval skin that contains the immobile specimen until it ecloses as an adult.

1. Staging based upon length of metamorphosis:

At 0 hAPF, specimens can be transferred to a fresh vial or Petri dish using a moistened paint brush. To keep specimens from drying out, add a piece of Kimwipe and moisten with water. Transfer vial or dish to a 25°C incubator until the desired hAPF.

It is often inconvenient to analyze specimens for CRE activity at a specific timepoint following the collection of 0 hAPF specimens. Alternatively, one can identify correctly staged specimens at a time convenient for analysis based upon the presence and position of several morphological markers (detailed below) that are visible through the puparium or after puparium removal (Fig. 2).

While some confocal acquisition software allows for further processing of projection images, we prefer to use the freely available Image J software program to evaluate confocal images18. Using Image J 18 recorded GFP expression patterns can be quantified as pixel value statistics within a specified area. Although images do not need to be in gray scale we prefer to do so.

Figure 1. Using the intensity of the white-rescue eye phenotype to make transgenic lines homozygous. In order to quantitatively evaluate reporter transgenes it is important that each specimen have the same reporter transgene genotype. (A) A white gene mutant genetic background with an attP landing site sequence is utilized for site-specific transgene integration. Transgenic individuals (B) hemizygous and (C) homozygous for the integrated vector can typically be distinguished by the intensity of the rescued eye color phenotype by the number of copies of the integrated mini white gene. Homozygous lines can be established by crossing (C) male and female flies with the darkest eye color phenotype. 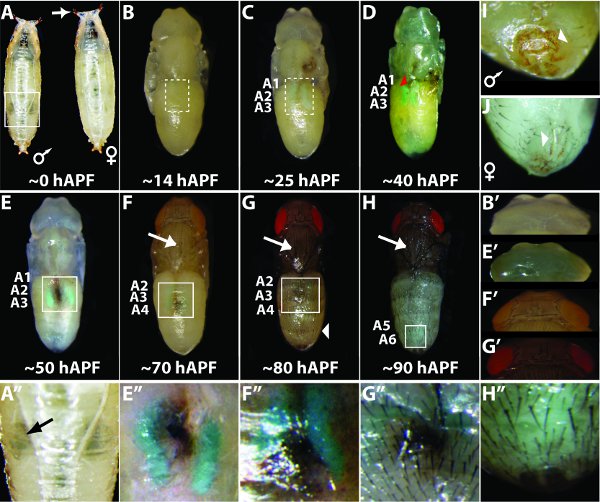 Figure 2. Using morphological markers to determine the metamorphic stage for Drosophila. During metamorphosis from a larva to an adult fruit fly, the specimen transitions through a series of stereotypic morphologies that can be used to determine the sex and approximate the development stage. Specimens in B-H have been removed from their puparium. Boxes in panels A, E, F, G and H indicate the zoomed in regions respectively for panels A", E", F", G", and H". 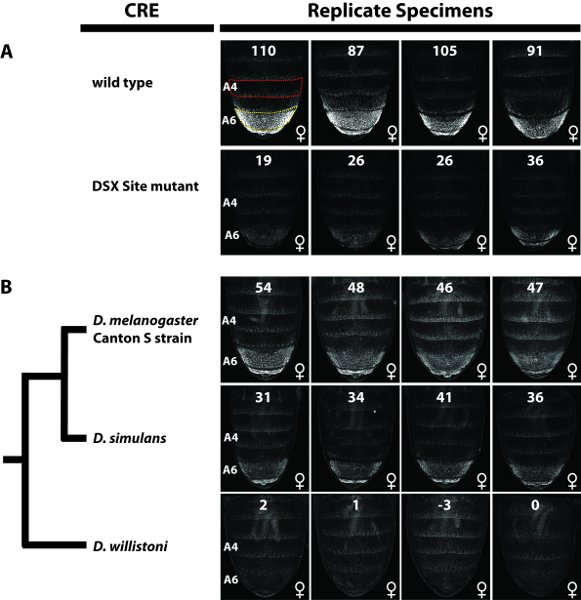 cis-regulatory elements encode the genomic program that specifies gene expression patterns and thereby the process of development1, and are prominent locations for both mutations underlying morphological evolution2-4 and phenotypic variation for human traits5,6,19. In spite of this importance, the regulatory logic for CREs remain poorly understood. A prominent reason for this understanding deficit has been the lack of suitable methods to quantitatively compare functional sequences of CREs. Here we present a protocol that capitalizes on improved transgenesis methods for D. melanogaster to add a quantitative aspect to the study of CREs.

In our experience when quantifying a CRE’s regulatory activity, variation between replicate specimens is of 10% or less of the adjusted mean pixel value when replicates are (1) of the same developmental stage and (2) the reporter transgene is in the same genomic landing site. This amount of variation is consistent with that determined for the CREs presented in Figure 3, and places a limitation on the use of this quantitative method to situations where genetically distinct versions of a CRE differ in regulatory activity by a value greater than 10%. Importantly though, this limitation is a significant improvement over the qualitative descriptions of “reduced” or “increased” that those studying CREs previously had to use when describing varying activity.

When versions of a CRE are known or found to quantitatively differ in their regulatory activities, this protocol makes feasible determining which of the mutational differences are responsible for or contribute to the activity difference12,13. The ability to identify these functionally-relevant mutations is a necessary first step to determine the molecular mechanisms, such as the gain or loss of transcription factor binding sites, causing CRE activities to differ. Looking forward, the use of this protocol for other Drosophila CREs and the application of similar methods in protocols for other model organisms should allow for a better understanding of CRE logic to emerge. This includes an ability to discriminate functionally-relevant CRE mutations from the morass of functionally-neutral mutations.

We thank: Nicolas Gompel and Benjamin Prud'homme for their contributions to the development of this protocol; Melissa Williams and four anonymous reviewers for comments on the manuscript; the University of Dayton Graduate School for research fellowships to WAR; and the University of Dayton Biology Department and Research Institute (UDRI) for research support for TMW. This work was supported by the American Heart Association Grant 11BGIA7280000 to TMW.