Förster resonance energy transfer (FRET)-based reporters1 allow the assessment of endogenous kinase and phosphatase activities in living cells. Such probes typically consist of variants of CFP and YFP, intervened by a phosphorylatable sequence and a phospho-binding domain. Upon phosphorylation, the probe changes conformation, which results in a change of the distance or orientation between CFP and YFP, leading to a change in FRET efficiency (Fig 1). Several probes have been published during the last decade, monitoring the activity balance of multiple kinases and phosphatases, including reporters of PKA2, PKB3, PKC4, PKD5, ERK6, JNK7, Cdk18, Aurora B9 and Plk19. Given the modular design, additional probes are likely to emerge in the near future10.

Here, we discuss a method to monitor FRET-based probes using ratiometric imaging throughout the human cell cycle. The method relies on equipment that is available to many researchers in life sciences and does not require expert knowledge of microscopy or image processing.

1. Introducing the probe to cells

Plk1 activity is first visible in the nucleus in G2 phase and peaks during mitosis. Figure 3 shows an experiment using minimal phototoxicity settings as described in section 2. Please note that this is a representative initial result and that exposure conditions or time between images can be modified to increase signal to noise ratio or temporal resolution. Figure 3D shows that a majority of the cells expressing the probe proliferate with a cell cycle time of between 20 and 25 hours, indicating that the imaging conditions and expression levels of the probe do not affect cell cycle timings. Although there is considerable noise, the trend of Plk1 activity increasing in G2 and peaking in mitosis14 is clearly visible (fig 3A). Processing the raw data, here by mean filtering presented as a kymograph (fig 3B), or quantification of the average inverted ratio (fig 3C) can enhance clarity. 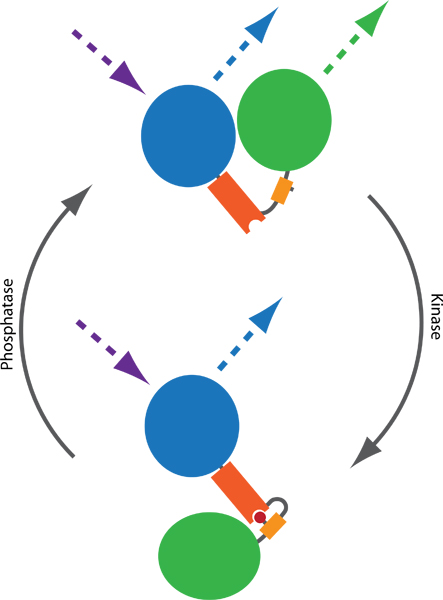 Figure 1. Principle of a FRET-based probe to monitor kinase and phosphatase activities. Two fluorophores, typically CFP (blue) and YFP (green), are connected by a phospho-binding domain (orange) and a phosphorylatable sequence (yellow). Phosphorylation (red) mediates binding to the phospho-binding domain, thereby inducing a conformational change in the probe. The conformational change results in a difference in the distance or orientation between the two fluorophores, which affects the FRET efficiency between CFP and YFP. FRET can be visualized by exciting CFP and monitoring YFP emission (dotted lines). 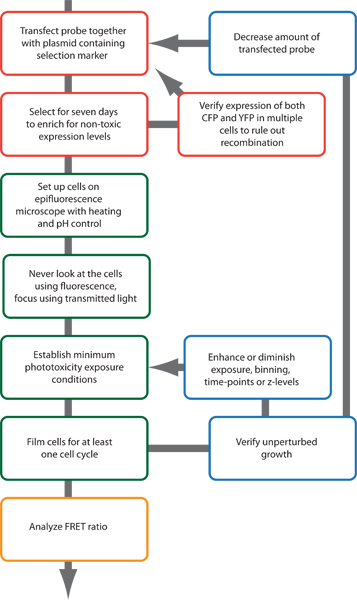 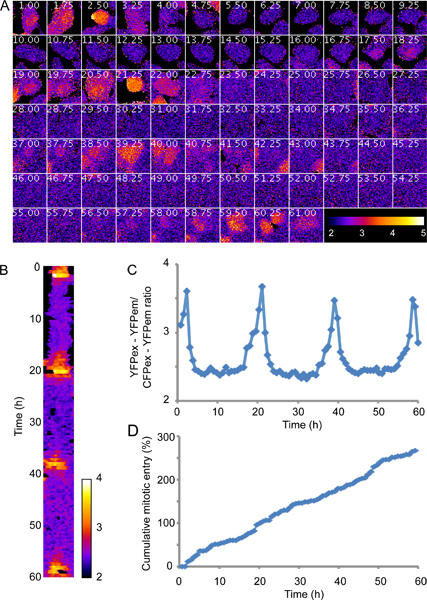 Figure 3. Plk1 activity is first visible in the nucleus in G2 phase and peaks during mitosis. U2OS cells expressing a FRET-based probe monitoring Plk1 activity9,14 were filmed for 60 hr using a Deltavision Spectris Imaging system equipped with a 20x NA 0.7 air objective and a mercury lamp. Imaging conditions were selected to cause minimal phototoxicity, as outlined in section 2, using 4x binning and neutral density filters that block 99% of the incoming light. A, false color representation of inverted FRET-ratio, following one cell through 4 divisions. B, kymograph of the cell shown in A after applying a mean filter. C, quantification of the inverted FRET ratio of the cell shown in A. D, cumulative mitotic entry of 50 FRET-probe expressing cells, including divisions of daughter cells.

Monitoring FRET throughout the cell cycle requires considerations that are less crucial when assessing short-term responses to external stimuli. First, cell cycle progression is easily perturbed by stress signaling, requiring that phototoxicity is kept to a minimum. Second, all reporters can potentially affect cellular processes by titrating out kinases, phosphatases or interaction domains. The probably most straightforward way to assess if the experimental conditions are adequate is to measure the cell cycle length from mitosis to mitosis and compare it to experiments independent of fluorescence imaging and expression of a probe.

A crucial factor in monitoring FRET ratios throughout the cell cycle is to withstand the temptation to acquire beautiful images with high resolution. Although the exact settings depend on the sensitivity of the microscope system and expression level and nature of the particular probe, it is important to use a level of binning that corresponds to what is absolutely necessary to see. Although the time between CFPex – YFPem and YFPex – YFPem images need to be short to avoid changes in cell morphology, in our hands it is better to keep exposure times at more than 0.1 seconds and reduce the intensity of the fluorescent light by neutral density filters.

How phototoxicity affects the cell cycle depends largely on expression levels and localization of the probe. A probe that is localized to chromatin, for example by fusion with a Histone, renders cells more sensitive to fluorescent light, presumably since phototoxic byproducts are created in the vicinity of DNA. It is therefore crucial to monitor cells that express relatively low levels of the reporters and to re-check cell-cycle timings if localizing the probe to different subcellular structures.

Several control experiments are required to verify that FRET is present in the experimental setup and that ratio changes reflect actual phosphorylation of a probe. Except functional controls, such as inhibition or depletion of a kinase, it is advisable to perform biochemical experiments to verify that the probe is phosphorylated, mutation of the expected phospho-acceptor site within the probe to a non-phosphorylatable residue, and acceptor photobleaching to prove the occurrence of FRET. For an example of an extensive validation, see supplementary figure 3 in ref 14.

Although it is theoretically preferable to assess FRET changes by monitoring both CFP and YFP emission, such setups are very sensitive to focus changes and illumination conditions and can easily lead to artifacts. Sensitivity to focus changes is due to chromatic aberration, where CFP and YFP emission do not focus on the same point. Illumination changes depend largely on different alignment of the light path. This is particularly prominent when using filter cubes containing a dichroic mirror. Focus and illumination change can be reduced using corrected objectives and carefully aligned filter cubes. However, in our experience, keeping the emission filter constant gives superior results, preferably by using a setup with separate control of excitation and emission filters.

The magnitude of the observed FRET-change is reduced by bleedthrough from CFP fluorescence to the YFP emission filter. In case bleedthrough is substantial, an extra CFPex – CFPem image can be acquired to correct bleedthrough into the CFPex – YFPem image. However, such corrections are very sensitive to focus differences and may introduce artifacts. In addition, they require an extra image, which may produce phototoxicity.

Although less of an issue when only monitoring YFP emission, keeping the cells in focus throughout a 24h+ time-lapse experiment can be challenging. To avoid focus drifts, make sure that the microscope and the dish is pre-warmed and that the temperature in the room does not fluctuate. Alternatively, use an autofocus system that is not based on imaging of the transfected probe.

The choice of which objective to use depends on the particular application. An oil-based high NA objective collects more light and gives increased resolution, but is more sensitive to focus changes and is unpractical in high-content setups. We prefer to use an air objective with a relatively high NA to study cytoplasmic or nuclear FRET-ratios, and use high NA oil objectives only when higher subcellular resolution is required.

This paper discusses a straightforward method to film FRET-based probes through the cell cycle that uses equipment that are commonly available to many life science researchers and require only a basal knowledge of microscopy and image processing. More specialized alternatives include the use of beam-splitters, Fluorescence Lifetime Microscopy (FLIM)1 and software to automate object segmentation16 and calculation of FRET ratio17.