Here we describe a method to directly visualize microregional tissue hypoxia in the mouse cortex in vivo. It is based on concurrent two-photon imaging of nicotinamide adenine dinucleotide (NADH) and the cortical microcirculation. This method is useful for high resolution analysis of tissue oxygen supply.

The brain's ability to function at high levels of metabolic demand depends on continuous oxygen supply through blood flow and tissue oxygen diffusion. Here we present a visualized experimental and methodological protocol to directly visualize microregional tissue hypoxia and to infer perivascular oxygen gradients in the mouse cortex. It is based on the non-linear relationship between nicotinamide adenine dinucleotide (NADH) endogenous fluorescence intensity and oxygen partial pressure in the tissue, where observed tissue NADH fluorescence abruptly increases at tissue oxygen levels below 10 mmHg1. We use two-photon excitation at 740 nm which allows for concurrent excitation of intrinsic NADH tissue fluorescence and blood plasma contrasted with Texas-Red dextran. The advantages of this method over existing approaches include the following: it takes advantage of an intrinsic tissue signal and can be performed using standard two-photon in vivo imaging equipment; it permits continuous monitoring in the whole field of view with a depth resolution of ~50 μm. We demonstrate that brain tissue areas furthest from cerebral blood vessels correspond to vulnerable watershed areas which are the first to become functionally hypoxic following a decline in vascular oxygen supply. This method allows one to image microregional cortical oxygenation and is therefore useful for examining the role of inadequate or restricted tissue oxygen supply in neurovascular diseases and stroke.

1. Preparing the animal for imaging

Note: We use adult c57BL mice. Different transgenic strains can be used depending on the research question. Microvascular surgeries and pulse oximetry are facilitated in mice with white fur (e.g. FVB strain).

Note: We routinely used the femoral vein for intravenous application of Texas red rather than the tail vein. This is because femoral vein injections provide safe and reproducible bolus injections of the dye.

Note: We use an Olympus Fluoview1000 multiphoton imaging system (upright) with a Spectra-Physics MaiTai HP DeepSee femtosecond Ti:Sa laser as an excitation source. For imaging, we use × 10 NA 0.45 (Zeiss C-Apochromat), or × 25 NA 1.05 (Olympus XLPlan N) water-immersion objectives. We take images at 12-bit depth at a resolution of 512 × 512 pixels with a pixel dwell time of 2 μs. The NADH and Texas-Red-dextran are concurrently excited at 740 nm, and fluorescence is separated from the excitation light using a dichroic mirror/near-IR-blocking filter combination (FF665-Di01; FF01-680/SP, Semrock, Rochester, NY, USA) divided into two channels using a dichroic mirror (505DCXRU, Chroma, Rockingham, VT, USA), and bandpass filtered (NADH-Semrock FF460/80Texas-Red-dextran-Semrock FF607/36). Laser power measured after the objective was 10-20 mW for imaging in layer I and 20-50 mW for imaging in layer II.

Figure 2 Shows a video of NADH/angiography images during transient hypoxemia (for the PDF version of this Figure, selected still images have been used). The inspired oxygen concentration was lowered from 21 % to 10 % for a period of 3 min. This level of experimentally induced hypoxemia is sufficient to induce severe hypoxia in the cerebral cortex. Hypoxia led to an increase in NADH fluorescence, initially in the areas which were furthest from the arterial blood supply. Note the sharp NADH tissue boundaries, which represent observable tissue boundaries of oxygen diffusion from the cortical microcirculation. The image in Figure 3 shows the geometry of oxygen diffusion boundaries surrounding cerebral vessels. It is possible to deduce Krogh cylinder diameters from these boundaries, as described previously 1. 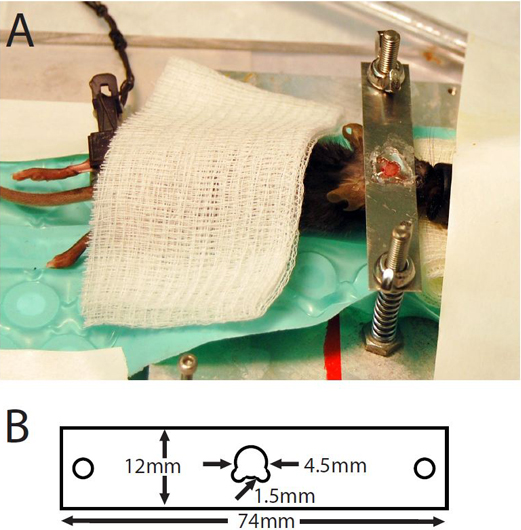 Figure 1. (A) Mouse with cranial window prepared for imaging. (B) Dimensions of head plate.

Figure 2. Endogenous NADH green fluorescence visualized with two-photon imaging through cranial window, approximately 50 μm below the pial surface. Blood vessels are visualized with Texas Red dextran. Oxygen in inhaled air was reduced to 10% for 3 min, and then restored for 21%. Scale bar: 50μm.

High spatial resolution information about oxygen diffusion is important to understanding how blood flow in the brain is regulated to provide oxygen to brain cells, and to meet metabolic demand. Traditional polarographic oxygen measurements using Clark-style glass electrodes are highly invasive and have low spatial resolution2-3 and significant (second range) response time. So far the only non-invasive method for measuring pO2 in brain tissue is phosphorescence quenching, where the rate of decay of the excited probe is proportional to oxygen concentration4. This method provides accurate oxygen concentrations, but requires a proprietary dye and a technically sophisticated phosphorescence lifetime imaging system. Here, we demonstrate a straightforward, simpler approach that can be conducted on a standard two-photon imaging system with two flurescence channels. Our approach takes advantage of an intrinsic tissue signal5 and only requires contrasting visualization of the cortical microcirculation. Because of the non-linear, essentially binary increase of NADH fluorescence at functionally limiting oxygen concentrations1, increased intrinsic NADH fluorescence is observed only in areas with significant, metabolically limiting hypoxia. An important implication is that tissue boundaries of oxygen diffusion from cortical microvessels are directly observable by cylindrically shaped intensity changes of endogenous NADH fluorescence. We refer to these structures as Krogh cylinders, because the concept of cylindrically shaped structures that define the oxygenated volume of tissue surrounding a blood vessel was introduced by August Krogh and has been recently experimentally observed using two-photon NADH imaging1. Krogh cylinders images can be collected in 3D by taking a z-stack of image frames. They are especially prominent in the vicinity of penetrating arterioles and they are congruous with capillary depleted periarteriolar tissue cylinders1,4.

To provide an objective determination of the Krogh tissue cylinder radius R (see Section 5.2) we measured their radial pixel intensity values within a well-defined segment between the center of the cylinder and the outer boundary using the Matlab function “improfile”. The outer boundary of the segment should be chosen to extend with a safety margin beyond the visible boundary. To improve the signal-to-noise level we averageed over all radial lines needed to cover the visible cylinder segment at 1° steps. The resulting mean radial intensity profile within the segment exhibited a steep increase which corresponded to the visible tissue boundary R. The we fit a sigmoidal function (e.g. Boltzmann function) to the averaged radial intensity profile and used its inflection point (also known as x0) as a definition of R. The corresponding two-photon microangiography (Texas-red) revealed the cross-section of a solitary central blood vessel in the center of cylinder. The diameter of the central blood vessel can be directly applied to determine r.

Two-photon NADH imaging provides the same spatial resolution as the concurrent high-resolution imaging of the cortical microangiography. An important feature for the quantitative application of this method is that p50 of the NADH fluorescence increase has been measured to be of 3.4 ± 0.6 mm Hg 1 and that the NADH fluorescence intensity as a function of microregional tissue pO2 can be mathematically described with a sigmoidal function. . We show that this technique allows one to identify brain areas which are most vulnerable to hypoxia (by decreasing oxygen content in the air to 10 %). We also show that oxygen diffusion follows a simple geometric perivascular pattern.

One critical step for this method is the quality of the cranial window preparation. The surgery should produce minimal damage in order not to disturb blood flow to the exposed area. A concern is that in a surgically compromised preparation, the cortex under the window may be hypoxic to begin with, precluding any meaningful experiments. A well-prepared cranial window should have intact major and minor blood vessels with vivid blood flow in all vessel types and no significant bleeding along the edges. Under normoxic conditions (PaO2 80-100 mmHg, Sp O2 97-99%) the brain parenchyma should exhibit uniform, homogeneous NADH fluorescence without conspicuous, bright tissue patches with elevated NADH fluorescence.

A fundamental physical constraint of our approach is limited depth penetration. The blue-green NADH fluorescence in brain is rapidly attenuated by hemoglobin absorption and tissue scattering at these wavelengths. Even with high numerical aperture (e.g. 1.05) water immersion objectives two-photon NADH imaging is currently limited to cortical layers I and II. This limitation is scientifically relevant because energy metabolism in or in proximity to white matter will likely differ from gray matter. However, the investigation of deep cortical structures such as layers IV-VI or subcortical structures such as white matter tracts or the striatum would require the use of specialized microlenses as described in the mouse cortex in vivo6.

NADH-based measurement of oxygen diffusion boundaries can be especially useful when combined with other measurements such as analyses of functional hyperemia, and detection of capillary flux rates7. For example, this technique can be adapted to visualize hypoxia in stroke and Alzheimer’s disease (AD) models. The simple geometry of oxygen diffusion allows one to predict the oxygen gradient in microvascular beds under circumstances where capillary density is decreased8 (e.g., AD9) and to examine whether brain tissue regions with reduced capillary density are at increased risk for hypoxia damage due to microstrokes. The ability to image microregionally also allows one to examine the geometry and size of tissue microstrokes and determine the volume of tissue in which hypoxia occurs, as well as the relationship between tissue hypoxia and subsequent neuronal death or capillary remodeling10.

In conclusion, two-photon imaging of endogenous NADH fluorescence is a simple, undemanding tool that can be used to understand oxygen delivery and consumption in the brain under both normal and in pathologic states.

We thank Dr. Maiken Nedergaard (University of Rochester Medical Center) for the head plate design. The work has been supported by NIH awards to S.D (R01DA026325 and P30AI078498 and foundation grants to KK (DANA foundation Brain and Immunoimaging program, American Heart Association 0635595T and the ALS Association [#1112)]).