In this article we describe the use of magnetic tweezers to study the effect of force on enzymatic proteolysis at the single molecule level in a highly parallelizable manner.

The generation and detection of mechanical forces is a ubiquitous aspect of cell physiology, with direct relevance to cancer metastasis1, atherogenesis2 and wound healing3. In each of these examples, cells both exert force on their surroundings and simultaneously enzymatically remodel the extracellular matrix (ECM). The effect of forces on ECM has thus become an area of considerable interest due to its likely biological and medical importance4-7.

Single molecule techniques such as optical trapping8, atomic force microscopy9, and magnetic tweezers10,11 allow researchers to probe the function of enzymes at a molecular level by exerting forces on individual proteins. Of these techniques, magnetic tweezers (MT) are notable for their low cost and high throughput. MT exert forces in the range of ~1-100 pN and can provide millisecond temporal resolution, qualities that are well matched to the study of enzyme mechanism at the single-molecule level12. Here we report a highly parallelizable MT assay to study the effect of force on the proteolysis of single protein molecules. We present the specific example of the proteolysis of a trimeric collagen peptide by matrix metalloproteinase 1 (MMP-1); however, this assay can be easily adapted to study other substrates and proteases.

In order to provide a concrete example for the application of our methodology, we describe recent work in our laboratory that characterizes the proteolysis of a trimeric collagen model peptide. We anticipate that this general approach may be broadly applied to other proteins and polynucleotides.

The above protocol describes a novel use of magnetic tweezers (Figure 1) for studying the effect of force on enzymatic proteolysis. We calibrated the tweezers for 1 μm and 3 μm beads using both the magnitude of the observed Brownian fluctuations and calculation of the roll-off frequency at varying magnet positions (Figure 2). In the force proteolysis experiments, the setup is similar except that the DNA is replaced with collagen (Figures 3, 4). The normalized number of beads remaining can be plotted as function of time to find the proteolysis rates (Figure 5), and this process can be repeated for varying enzyme concentrations and forces. 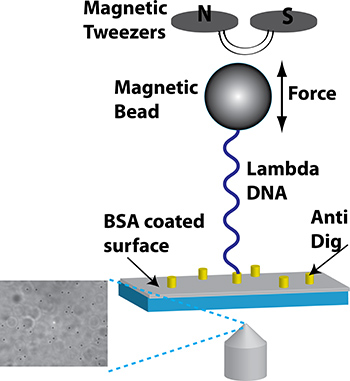 Figure 1. Schematic of the magnetic trap calibration process (not to scale). Two permanent rare earth magnets create a magnetic field that pulls on the superparamagnetic bead. Translating the magnet up and down adjusts the applied force. The beads are imaged using a conventional bright-field microscope with the light passing through a pinhole between the two magnets. Inset: Image taken with a 40x air objective. The sharp, round spots correspond to the beads attached to the coverslip surface. The out-of-focus objects are detached beads.

Figure 2. Plots of the calibrated force as a function of magnet distance from the sample surface for 1 μm (left) and 2.8 μm (right) beads. Data were fit to the empirical function

, where x is the distance from the magnet. a = 31.8, b= 5.61, and c = 4.39 for the 1 μm beads and a = 140, b = 3.10 and c = 1.86 for the 3 μm beads. These values are specific to our specific instrument and experimental geometry, and each instrument should be calibrated individually. The error bars at each point represent a ~10% variability in applied force on a bead to bead basis, due to the variability in bead size. The force applied is proportional to the volume of the beads, and the bead volume varies ~9% over the mean (according to manufacturer specifications). 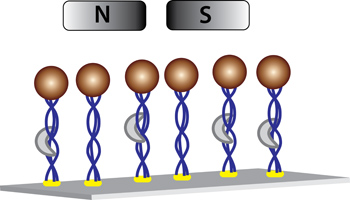 Figure 4. Schematic cartoon of proteolysis as a function of time. The cartoon shows a sample field of view over time as proteolysis occurs. Over time, MMP-1 cuts the collagen and the beads detach and move away from the focal plane under the influence of the magnetic field. 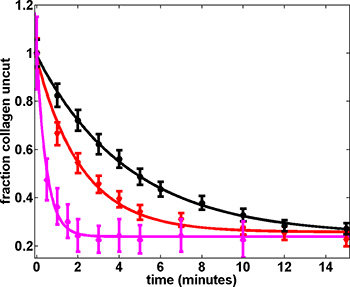 This protocol describes a new use for a classical single molecule technique. Magnetic tweezers allow medium to high-throughput single molecule assays in a cost-efficient manner. However, like all experimental techniques there are challenges and potential pitfalls.

Compared to an optical trap the spatial and temporal resolution of a MT apparatus is low. Moreover, the forces generated by the simple MT described here are 30 pN or less, significantly less than forces routinely accessed in AFM experiments. This limitation can be a virtue: MT are well suited for applying sub-pN forces.

Unlike an optical trap or AFM, conventional MT, such as the apparatus here, do not allow the manipulation of individual particles. Optical traps are usually used to apply force parallel to the coverslip, while MT are best-suited for vertical pulling experiments. Electromagnetic MT address these limitations, although at the cost of increased complexity.

We note that variations in bead size and magnetic particle content result in variations in applied force of ~10%. This effect was not important in our recent experiment because we average over hundreds of beads in each measurement. However, experiments that extract unique information from each tethered bead could potentially require a more accurate calibration method.

In cases 1-5, where some component of the attachment series was deliberately omitted, anywhere from 0 to 4 beads were seen attached to the flow cell per field of view (80,000 μm2). Only in case 6, where all the attachment moieties are present, did we see ~30-60 2.8 μm beads and 80-200 1 μm beads attached to the surface. The proteolysis kinetics observed are adequately fit by a single exponential plus a constant term, which strongly suggests that there is only one rate limiting step, and hence only a single tether. The constant term likely reflects beads that are non-specifically attached to the coverslip.

We report the concentrations of antibody and protein that worked for our experiment. A wide range of concentrations for each component should be examined when developing a new assay. BSA worked well as a surface passivation agent in our experiment. However, this method may not work in all circumstances. Other protocols for surface passivation have also been used with success. Examples include polyethylene glycol functionalized glass slides17, supported lipid bilayers18, or casein as a blocking agent.

In force proteolysis experiments, there is always some non-specific detachment (especially at higher forces19) due to dissociation of non-covalent (e.g. biotin - streptavidin) interactions. We account for this phenomenon by measuring proteolysis at various MMP-1 concentrations, including no MMP-1, as described in Adhikari et. al. Measuring proteolysis at various MMP-1 concentrations for all forces allows us to generate Michaelis-Menten curves, where are used to calculate the catalytic efficiency kcat/KM of the enzyme. Alternatively, if various concentrations of the enzyme are not used, we recommend that a control measurement be done with no enzyme at the given forces to subtract off the rate of non-specific detachment.

The magnetic tweezers cover a wide force range. The forces that can be exerted depend upon the size of the beads. 1 μm and 2.8 μm beads overlap in accessible forces, and in our experience, using either of the beads at the intermediate forces works well.

We anticipate that similar experimental approaches may be broadly applicable in studying force dependent proteolysis4,20, unfolding21 and binding interactions22. We and others23 have noted that the radius of diffraction rings for out of focus beads provides a sensitive means for tracking the position of the bead relative to the coverslip23. Although generally not used in this way, we believe that MT assays have the capacity to provide nanometer-precision measurements of protein structural dynamics. This additional information may be particularly valuable in the context of force-dependent proteolysis or binding measurements.