Silk films are a novel class of biomaterials readily customizable for an array of biomedical applications. The presented silk film culture system is highly adaptable to a variety of in vitro analyses. This system represents a biomaterial design platform offering in vitro optimization before direct translation to in vivo models.

Silk films are promising protein-based biomaterials that can be fabricated with high fidelity and economically within a research laboratory environment 1,2 . These materials are desirable because they possess highly controllable dimensional and material characteristics, are biocompatible and promote cell adhesion, can be modified through topographic patterning or by chemically altering the surface, and can be used as a depot for biologically active molecules for drug delivery related applications 3-8 . In addition, silk films are relatively straightforward to custom design, can be designed to dissolve within minutes or degrade over years in vitro or in vivo, and are produce with the added benefit of being transparent in nature and therefore highly suitable for imaging applications 9-13. The culture system methodology presented here represents a scalable approach for rapid assessments of cell-silk film surface interactions. Of particular interest is the use of surface patterned silk films to study differences in cell proliferation and responses of cells for alignment 12,14 . The seeded cultures were cultured on both micro-patterned and flat silk film substrates, and then assessed through time-lapse phase-contrast imaging, scanning electron microscopy, and biochemical assessment of metabolic activity and nucleic acid content. In summary, the silk film in vitro culture system offers a customizable experimental setup suitable to the study of cell-surface interactions on a biomaterial substrate, which can then be optimized and then translated to in vivo models. Observations using the culture system presented here are currently being used to aid in applications ranging from basic cell interactions to medical device design, and thus are relevant to a broad range of biomedical fields. 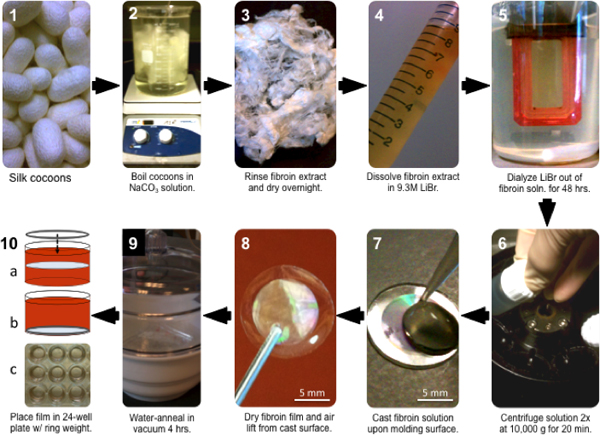 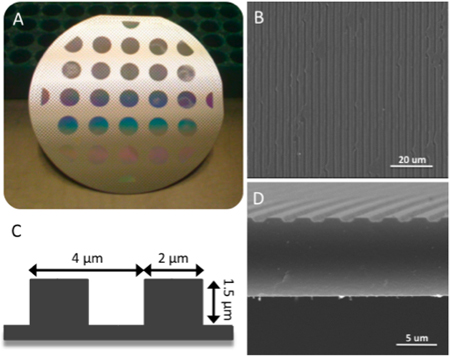 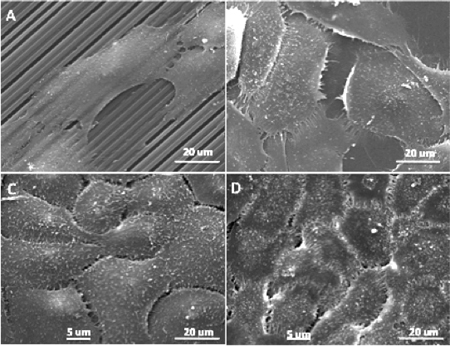 Figure 3. Scanning electron micrographs of HCLE cell line adhering to (A) patterned and (B) flat silk films at day 2 in culture. HCLE cultures continue to proliferate to confluence on (C) patterned and (D) flat surfaces by day 8 in culture. 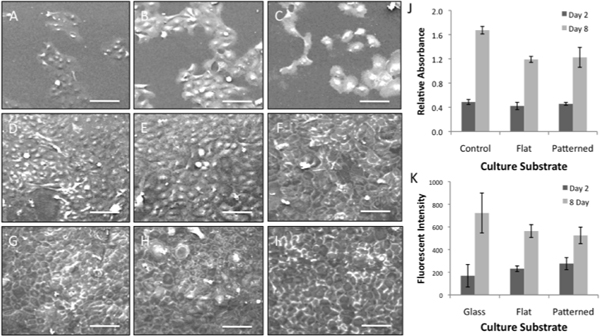 The use of regenerated silk films as a substrate for cell culture has gained in popularity over the past two decades due to extensive characterization of the material properties of this protein and increased understanding of its biomaterial utility 3,8 . The culture system described here represents a novel in vitro testing system for assessing cell surface interactions on patterned silk film biomaterial substrates 7 . The system allows for in depth analysis of cellular interactions over time that can be easily adopted for high-throughput data collection. This is largely enabled because silk films possess a number of tunable biomaterial properties that can be modified to directly affect cell function 8,9,12, including: control of surface micro/nano-surface topography 7; various surface chemistries through covalent modification or adsorption of biologically active molecules 13; robust mechanical properties 15,16; control of material hydrophilicity/hydrophobicity 16 ; bulk loading of biological compounds for release 4,8,17 ; and controlled dissolution/enzymatic degradation rates through control of the secondary structure (beta sheet content) 11,18,19 .

The transparency of silk films is achieved through annealing the films for a period of time under vacuum in the presence of water vapor 7,15. This processing approach allows for the formation of β-sheet secondary structure, fostering the insolubility of the material in water while allowing minimal diffraction of light 15. This transparency of films is key in enabling direct live-cell imaging that can be employed under a number of imaging modalities (i.e. wide-field and fluorescence) using any number of microscope systems 12,20. In addition to live-cell imaging, silk films can be easily removed from the culture system to allow for additional fixation and analysis. Thus, the large variety of direct experimental assessments that can be performed on this system are applicable to a wide variety of cell/tissue sources for many technical fields 3,8,9,12,13,21. The time-lapse imaging results illustrate how real-time culture data can be collected, and as an example were utilized to illustrate how surface topography affects cell interactions. The representative results demonstrate how silk film biomaterials can be utilized to support HCLE culture growth, and are amendable to a number of standard cellular proliferation and metabolic assays (Fig. 4). In addition, the cultures are fixed and processed for scanning electron imaging or other protocols (Fig. 3).

Silk film substrates are produced in the lab with high fidelity, consistency, and with relatively low cost (Fig. 1). This enables reproducibility in both culture system setup and experimental outcomes. It has been demonstrated that water-anneal processing produces a stable silk film material within culture that has defined degradation rates pending the concentration of proteases in solution 2,15,22. As a result these materials may be used for extended periods of time for long-term cell culture, or remain implanted for months or years depending on the physiological location 8. In addition, recent work has shown that both the protein structure and material properties of water-annealed silk films are consistent from batch to batch allowing for reproducible culture results as shown through various mechanical and biophysical testing methods 15,16. In addition, the material's surface has shown great fidelity amongst film batches as indicated by SEM, atomic force micrscopy (AFM), and cell culture studies {Lawrence:2008wr, Omenetto:2008tc, Bray:2011kq}7,23,24. Material stability and consistency is an important factor to how the cell will sense the culture substrate through the various mechanotransduction pathways, and ultimately produce a desired/undesired cellular response 25,26.

Historical standards for culture substrates, such as tissue culture treated plastic or glass, provide adequate substrates for cell attachment. However, these materials are not amendable for further utility in vivo. It can be envisioned that a silk film biomaterial could be customized in vitro, and once experimental expectations have been achieved the customized film can be directly translated to an in vivo model. Such paired design between in vitro and in vivo experimentation offers a great advantage for such implantable silk biomaterials over other substrates that are routinely used in vitro.