The CLEM technique has been adapted to analyze ultrastructural morphology of membranes, organelles, and subcellular structures affected by microinjected molecules. This method combines the powerful techniques of micromanipulation/microinjection, confocal fluorescent microscopy, and electron microscopy to allow millimeter to multi-nanometer resolution. This technique is amenable to a wide variety of applications.

The eukaryotic cell relies on complex, highly regulated, and functionally distinct membrane bound compartments that preserve a biochemical polarity necessary for proper cellular function. Understanding how the enzymes, proteins, and cytoskeletal components govern and maintain this biochemical segregation is therefore of paramount importance. The use of fluorescently tagged molecules to localize to and/or perturb subcellular compartments has yielded a wealth of knowledge and advanced our understanding of cellular regulation. Imaging techniques such as fluorescent and confocal microscopy make ascertaining the position of a fluorescently tagged small molecule relatively straightforward, however the resolution of very small structures is limited 1.

On the other hand, electron microscopy has revealed details of subcellular morphology at very high resolution, but its static nature makes it difficult to measure highly dynamic processes with precision 2,3. Thus, the combination of light microscopy with electron microscopy of the same sample, termed Correlative Light and Electron Microscopy (CLEM) 4,5, affords the dual advantages of ultrafast fluorescent imaging with the high-resolution of electron microscopy 6. This powerful technique has been implemented to study many aspects of cell biology 5,7. Since its inception, this procedure has increased our ability to distinguish subcellular architectures and morphologies at high resolution.

Here, we present a streamlined method for performing rapid microinjection followed by CLEM (Fig. 1). The microinjection CLEM procedure can be used to introduce specific quantities of small molecules and/or proteins directly into the eukaryotic cell cytoplasm and study the effects from millimeter to multi-nanometer resolution (Fig. 2). The technique is based on microinjecting cells grown on laser etched glass gridded coverslips affixed to the bottom of live cell dishes and imaging with both confocal fluorescent and electron microscopy. Localization of the cell(s) of interest is facilitated by the grid pattern, which is easily transferred, along with the cells of interest, to the Epon resin used for immobilization of samples and sectioning prior to electron microscopy analysis (Fig. 3). Overlay of fluorescent and EM images allows the user to determine the subcellular localization as well as any morphological and/or ultrastructural changes induced by the microinjected molecule of interest (Fig. 4). This technique is amenable to time points ranging from ≤5 s up to several hours, depending on the nature of the microinjected sample.

This procedure affords the ability to deliver a molecule of interest directly into the eukaryotic cellular cytoplasm and monitor its localization and/or effects on cellular and organeller architecture from millimeter to multi-nanometer resolution. A schematic illustration of the experimental setup and procedure is shown in Figure 2. This technique relies on microinjection of cells grown on a laser etched glass gridded coverslip (Fig. 3A), which after confocal microscopy, is able to transfer both the cells of interest as well as the grid pattern to the Epon resin (Fig. 3B).

A typical microinjection CLEM procedure yields fluorescence images and electron micrographs, that when correlated, permit both subcellular localization and ultrastructural analysis. Cells grown on a photoetched glass gridded coverslip are microinjected with a molecule of interest after which bright field images are obtained (Fig. 4A). An inert tracking dye is incorporated to distinguish microinjected cells from non-microinjected cells (Fig. 4B). Confocal z-stacks are obtained using a fluorophore or other identifier attached to the microinjected small molecule of interest (Fig. 4C). The sample is fixed with glutaraldehyde and processed for electron microscopy. Electron micrographs are obtained and overlaid onto the cells to which they correspond (Fig. 4D). Areas harboring fluorescent signals are inspected in greater detail at higher magnification (Fig. 4E).

Figure 1. Timeline of microinjection CLEM procedure. Depending on the experimental setup, microinjection and fluorescence measurements can be performed on the same day. Preparing the sample for electron microscopy is most time consuming due to long incubations steps and will last 2-3 days. TEM analysis and correlating fluorescence signals with electron microscopy images can be performed in one day. 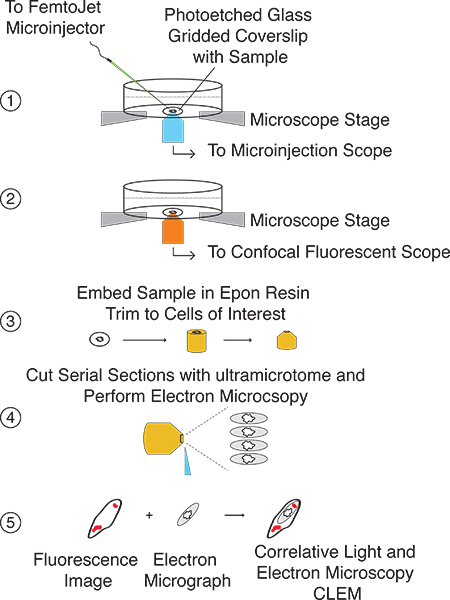 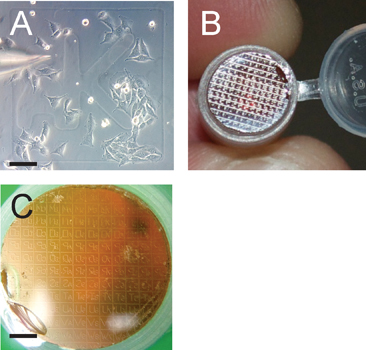 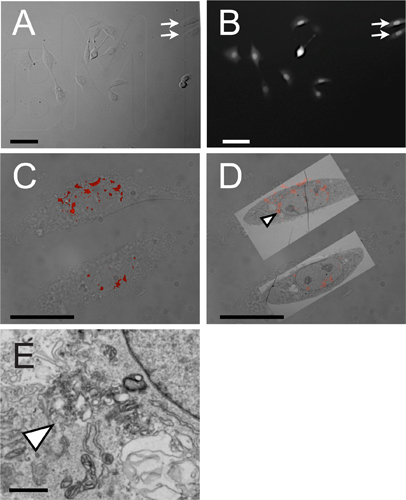 Figure 4. Representative results from microinjection correlative light and electron microscopy. Panel A shows the bright field micrograph of NRK cells growing on a laser etched glass gridded coverslip; arrows indicate two cells that are visualized by CLEM in panels C-D. Panel B shows the fluorescence of the inert tracking dye, in this case Cascade Blue, used to identify cells that were microinjected. Panel C shows the overlay of bright field and the fluorescence signature of a Rhodamine-labeled small molecule. The two cells shown here are indicated by arrows in panels A & B. Panel D represents CLEM of bright field, fluorescent and electron microscopy; arrow head indicates fluorescent puncta imaged at higher magnification in Panel E. Scale bars are as follows: Panels A & B, 100 μm; C & D, 50 μm; E, 100 nm.

The method presented here enables the direct delivery of purified proteins, nucleic acids, or small molecules to the eukaryotic cytoplasm and affords ultra high-resolution analysis through the correlation of fluorescent and electron microscopy. The use of this method is simple yet robust and can be performed in-house with many existing core facilities and/or appropriately equipped electron microscopy labs. The technique is also amenable to live-cell, allowing the user to monitor the dynamics of fluorescently tagged molecules in real time and thus can be used with time-lapse microscopy and correlated to tomographic electron microscopy.

Preliminary empirical trials should be conducted at all stages of the experiment to determine optimal confluency, microinjection efficiency and delivery of appropriate quantities of injectant, optimization of fluorophores and injection/tracking dye(s), and availability and/or expertise for electron microscopy analysis. Locating the injected cell in all steps of the CLEM procedure is critical to this protocol, and therefore it is recommended that cells growing in an alphanumeric grid near the center of the coverslip be chosen to increase the likelihood that the specimen will be documented in both confocal and electron microscopy. To aid in locating cells of interest, the relative positions of surrounding cells should be used as landmarks to aid in locating the appropriate specimen during EM analysis. Finally, section thickness should be tailored to the desired measurement. A serial section of ~70 nm thickness is recommended for TEM while a thicker section (~250-300 nm) is recommended for EM tomography.

The microinjection CLEM technique is primarily used in our laboratory to simulate the delivery of Type III secreted bacterial effector proteins and analyze their effects on the subcellular ultrastructure of the eukaryotic cell. However, the plasticity and ease of use of microinjection followed by CLEM affords many other avenues of investigation.

We thank members of the Alto laboratory for helpful discussions. We also thank The Molecular and Cellular Imaging Facility at UT Southwestern Medical Center, specifically Dr. Chris Gilpin, Tom Januszewski, and Laurie Mueller for technical expertise and advice. We also thank Dr. Xionan Dong for critical reading of the manuscript. This work is supported by NIH grant AI083359 to N.M.A.