The stereotyped projections of sensory afferents into the rodent spinal cord offer an easily accessible experimental system to study axonal branching through the tracing of single axons.

Here we present a technique to label the trajectories of small groups of DRG neurons into the embryonic spinal cord by diffusive staining using the lipophilic tracer 1,1'-dioctadecyl-3,3,3',3'-tetramethylindocarbocyanine perchlorate (DiI)1. The comparison of axonal pathways of wild-type with those of mouse lines in which genes are mutated allows testing for a functional role of candidate proteins in the control of axonal branching which is an essential mechanism in the wiring of the nervous system. Axonal branching enables an individual neuron to connect with multiple targets, thereby providing the physical basis for the parallel processing of information. Ramifications at intermediate target regions of axonal growth may be distinguished from terminal arborization. Furthermore, different modes of axonal branch formation may be classified depending on whether branching results from the activities of the growth cone (splitting or delayed branching) or from the budding of collaterals from the axon shaft in a process called interstitial branching2 (Fig. 1).

The central projections of neurons from the DRG offer a useful experimental system to study both types of axonal branching: when their afferent axons reach the dorsal root entry zone (DREZ) of the spinal cord between embryonic days 10 to 13 (E10 - E13) they display a stereotyped pattern of T- or Y-shaped bifurcation. The two resulting daughter axons then proceed in rostral or caudal directions, respectively, at the dorsolateral margin of the cord and only after a waiting period collaterals sprout from these stem axons to penetrate the gray matter (interstitial branching) and project to relay neurons in specific laminae of the spinal cord where they further arborize (terminal branching)3. DiI tracings have revealed growth cones at the dorsal root entry zone of the spinal cord that appeared to be in the process of splitting suggesting that bifurcation is caused by splitting of the growth cone itself4 (Fig. 2), however, other options have been discussed as well5.

This video demonstrates first how to dissect the spinal cord of E12.5 mice leaving the DRG attached. Following fixation of the specimen tiny amounts of DiI are applied to DRG using glass needles pulled from capillary tubes. After an incubation step, the labeled spinal cord is mounted as an inverted open-book preparation to analyze individual axons using fluorescence microscopy.

Note: Experimental use of mice should follow officially approved guidelines for the care and use of laboratory animals.

The spinal cord of the mouse receives afferent projections from 8 pairs of cervical, 13 pairs of thoracic, 5 pairs of lumbar and 4 pairs of sacral DRG totaling to 60 spinal ganglia. After some training a spinal cord with most DRG still attached can be isolated from an embryo in under five minutes. This procedure is suited for the isolation of spinal cords with attached DRG from E11.5 to E13.5 mouse embryos. However, best results are achieved from E12.5. Exemplary outcomes of the labeling procedure described here are shown in Figure 3. The labeling of DRG over the entire length of the spinal cord may then be used to quantify axonal branching behaviour at different vertebral levels (Fig. 4). 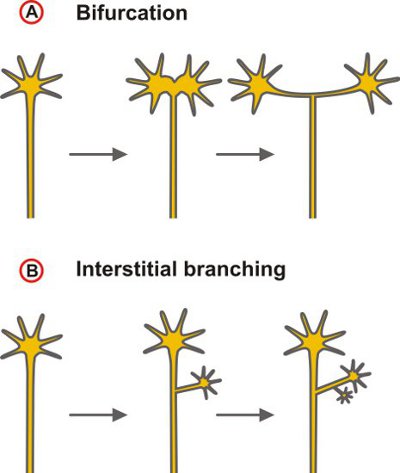 Figure 1. Scheme depicting the two principal modes of axonal branching. (A) Branching by the activities of the growth cone that could lead to a bifurcation - as indicated here - as well as complex terminal arbors or (B) collateral formation at the axon shaft (interstitial branching). The latter mode is the dominating branching type of projecting cortical and thalamocortical axons6,7. 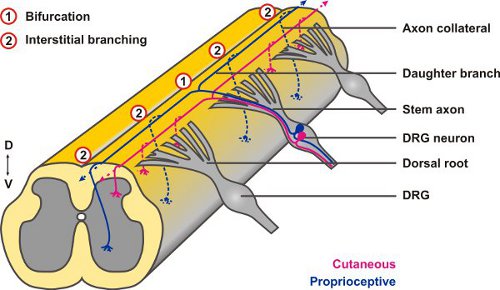 Figure 2. Afferent projections of DRG neurons into the embryonic spinal cord display both types of axonal branching: axons first branch at the DREZ by bifurcation (1) and from the resulting daughter branches collaterals form after a waiting period by interstitial branching (2).

Figure 3. Visualization of single axonal trajectories of embryonic mouse DRG neurons. (A) Spinal cord with attached DRG prepared from an E12.5 mouse embryo. (Scale bar, 1 mm.) (B-D) Dorsal views of DiI-labeled DRG of wild-type mice at increasing magnification are shown. In B every second DRG is labeled by DiI. Fluorescence images are inverted, caudal is at the left and in C and D, lateral is at the bottom. In C a small number of axons is labeled and at higher magnification the presence of T-like branches can be identified in the DREZ of the spinal cord. (Scale bars, 250 μm (B), 100 μm (C) and 50 μm (D).)

Figure 4. Quantification of T-shaped branches, single rostral or caudal turns in wild-type and C-type natriuretic peptide (CNP)-deficient mice at E13.5. The numbers of single axons counted are given in brackets for different trunk levels for each genotype. C- or R-turns - growth only in caudal or rostral direction, respectively.

Figure 5. A cGMP signaling pathway triggers sensory axon bifurcation at the DREZ of the spinal cord. (A) Scheme of the cGMP signaling pathway composed of the ligand CNP, the receptor guanylyl cyclase Npr2 and the serine/threonine kinase cGKIα in embryonic DRG neurons. Npr2 generates cGMP from GTP upon stimulation by CNP. (B) DiI tracing of single axons of DRG neurons in wild-type and CNP-deficient mice. (Scale bar, 25 μm.)

Stereotyped projection patterns comprising both types of axonal branch formation together with ease of preparation in combination with the use of fixed tissue for DiI labeling makes the embryonic spinal cord with attached DRG a favourable model to study axonal branching. The application of minute amounts of DiI using coated glass needles allows - in contrast to the bulk labeling of DRG - the visualization of small groups of DRG neurons and thereby the analysis of individual axons and their branching patterns. The described method could be further improved by iontophoretic injection of the lipophilic tracer which further decreases the number of labeled neurons8. However, this would be more time-consuming.

DiI labeling of single axonal trajectories in whole mount preparations of the embryonic spinal cord was instrumental in the identification of a cGMP signaling cascade -comprising the ligand CNP, its receptor Npr2, and the cGMP-dependent kinase cGKIα - that regulates one type of axonal branching: the bifurcation of DRG neurons at the DREZ 4,5,9-12. In contrast to the wild-type, axons of DRG neurons in cGMP signaling mutants turn only in one direction, instead of bifurcating at the DREZ (Fig. 5). These studies also revealed that collateral formation was not affected in cGMP signaling mutants indicating that this second type of branch formation observed in DRG neurons is differently regulated4.

Alternatively, the branching behaviour of single DRG axons may also be studied in transgenic mouse lines expressing either a fluorescent protein in only a small subset of DRG neurons13 or containing a combination of fluorescent markers which allows one to distinguish between individual neurons14. However, the effort to cross-breed the mutant mouse model to be analyzed with the fluorescent mouse lines has to be considered. Furthermore, due to the promotor (Thy1) used expression of the fluorescent proteins in the transgenic mouse lines starts only at postnatal stages making it difficult to find out whether an observed branching phenotype is the result of impaired branch formation during embryonic development or a later degeneration process instead. In contrast, DiI labeling of embryonic DRG has the advantage to study the process of axonal branching and its disruption in appropriate mouse mutants at the time when axonal branching occurs.

Preparations of embryonic spinal cords with attached DRG might be further used for other labeling procedures (whole mount in-situ hybridization, LacZ- or AP-staining of transgenic mice), collection of spinal cord and DRG tissue for RNA-isolation, or when adapted to sterile conditions for tissue culture experiments and downstream applications like calcium imaging or electrophysiological measurements.