Eye tracking has long been used to study gaze patterns in typically-developing individuals, but recent technological advancements have made its use with clinical populations, including autism, more feasible. While eye-tracking young children with autism can offer insight into early symptom manifestations, it involves methodological challenges. Suggestions for best practices are provided.

The rise of accessible commercial eye-tracking systems has fueled a rapid increase in their use in psychological and psychiatric research. By providing a direct, detailed and objective measure of gaze behavior, eye-tracking has become a valuable tool for examining abnormal perceptual strategies in clinical populations and has been used to identify disorder-specific characteristics1, promote early identification2, and inform treatment3. In particular, investigators of autism spectrum disorders (ASD) have benefited from integrating eye-tracking into their research paradigms4-7. Eye-tracking has largely been used in these studies to reveal mechanisms underlying impaired task performance8 and abnormal brain functioning9, particularly during the processing of social information1,10-11. While older children and adults with ASD comprise the preponderance of research in this area, eye-tracking may be especially useful for studying young children with the disorder as it offers a non-invasive tool for assessing and quantifying early-emerging developmental abnormalities2,12-13. Implementing eye-tracking with young children with ASD, however, is associated with a number of unique challenges, including issues with compliant behavior resulting from specific task demands and disorder-related psychosocial considerations. In this protocol, we detail methodological considerations for optimizing research design, data acquisition and psychometric analysis while eye-tracking young children with ASD. The provided recommendations are also designed to be more broadly applicable for eye-tracking children with other developmental disabilities. By offering guidelines for best practices in these areas based upon lessons derived from our own work, we hope to help other investigators make sound research design and analysis choices while avoiding common pitfalls that can compromise data acquisition while eye-tracking young children with ASD or other developmental difficulties.

Although a variety of eye-tracking systems are commercially available, those that are most conducive to testing young children with ASD share the following features: 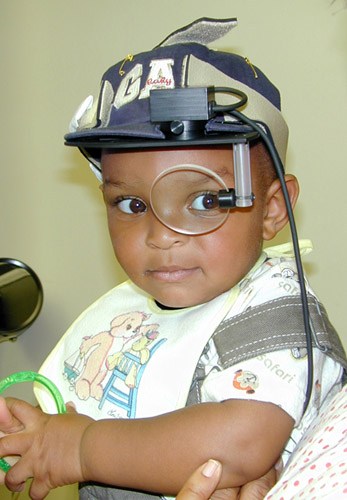 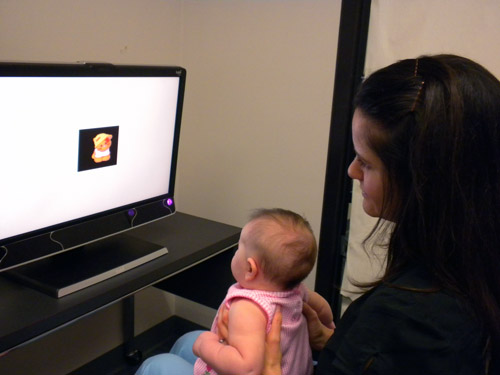 Figure 2. A child may sit on the lap of the caregiver if the child requires physical assistance in sitting, or if it is necessary for maintaining compliance.

Figure 3. Figure 3 represents a fixation map generated in research by our group. Shown here are the individual fixations, depicted by purple circles, by a single child with ASD while viewing a static image. Fixations from this and similar tasks are analyzed across participants to determine if children with and without ASD differ in their visual attention to various AOIs. 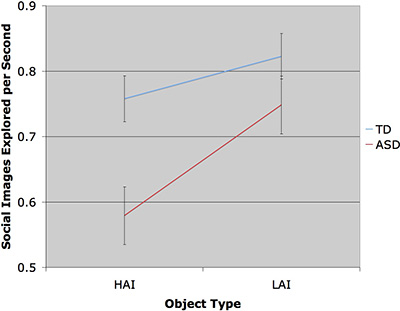 Figure 4. Figure 4 represents an example of a final product that includes many of the steps described above, including: 1) applying a fixation filter to raw gaze data, 2) assigning fixations to specific AOIs, and 3) condensing and comparing patterns of fixations across a group of typically developing (TD) children and a group of children with ASD. More specifically, this figure demonstrates that within a visual exploration paradigm, children with ASD explore (i.e., fixate) fewer social images TD children when "High Autism Interest" (HAI) objects are concurrently displayed. When "Low Autism Interest" (LAI) objects are presented with social stimuli, however, exploration of social images does not differ significantly between groups, suggesting that social attention in ASD is modulated based upon the relative salience of competing stimuli.21

The emergence of eye-tracking as an objective and accessible tool for examining perceptual characteristics of psychiatric disorders has facilitated research into the abnormal visual attention and oculomotor patterns that contribute to clinical characteristics of ASD. A particularly promising application of this work has been to study young children with ASD in order to capture early-emerging developmental mechanisms of the disorder. While investigations with this age group are critical for illuminating the early course and characteristics of ASD, doing so with traditional behavioral paradigms has often been challenging given the social and communicative impairments that exist in this population. Eye-tracking can alleviate some of these task demands by providing a direct and quantifiable measure of visual preferences and gaze behavior. Ultimately, this approach may help reveal important information during a critical period in the development of ASD, a process that in turn could inform early identification and intervention efforts.

Despite these benefits, eye-tracking young children with ASD is complicated by a number of methodological challenges. The current protocol details guidelines for implementing eye-tracking with this population. While the suggestions outlined here are limited to common and commercially available corneal-reflection eye-tracking systems, particularly those that do not restrict participant movement and can correct for head motion, they are designed to provide general instruction for interested researchers. Optimal design is often study specific, but general recommendations include selecting equipment and creating a testing environment that are conducive for studying this population, implementing procedures that minimize obstacles and potential distractions, and pursuing appropriate analytic strategies.

The adoption of such practices may expedite eye-tracking research aimed at examining early symptom manifestations of ASD, but they may also pertain to research groups interested in eye-tracking young children more broadly, including infants22, as well as children with developmental disabilities other than autism. Further, researchers may want to build upon these recommendations by incorporating eye-tracking with other physiological measures, such as EEG, galvanic skin conductance and heart-rate monitoring, to provide a more comprehensive profile of psychobiological response. The increasing availability of mobile eye-tracking systems also enhances the possibility to extend the study of gaze behavior in ASD into more ecologically-valid contexts, including live social interaction. These innovative designs are expected to rise in popularity in the coming years.

The authors have nothing to disclose and no conflicts of interest.

We thank all the children and caregivers who participated in our eye-tracking studies at the Callier Center for Communication Disorders at the University of Texas at Dallas, and at the UNC Carolina Institute for Developmental Disabilities.

N. Sasson was supported by Grant Number UL1RR024982, titled, "North and Central Texas Clinical and Translational Science Initiative" (Milton Packer, M.D., PI) from the National Center for Research Resources (NCRR), a component of the National Institutes of Health (NIH) and NIH Roadmap for Medical Research, and its contents are solely the responsibility of the authors and do not necessarily represent the official view of the NCRR or NIH.  Information on NCRR is available at http://www.ncrr.nih.gov/.  Information on Re-engineering the Clinical Research Enterprise can be obtained from http://nihroadmap.nih.gov/clinicalresearch/overview-translational.asp.

J. Elison was supported by an NRSA award (5-T32-HD007376) from NICHD to the Carolina Consortium on Human Development at the Center for Developmental Science, UNC.