Skip to content
Trial ends in Request Full Access Tell Your Colleague About Jove
This is a sample clip. If you're new to JoVE sign up and start your free trial today to watch the full video! If your institution has an existing subscription, log in or sign up to access this video.
Neuroscience
Author Produced
CITE THIS  SHARE

This video protocol demonstrates a novel method for the generation and subsequent purification of neuronal progenitor cells from a renewable source of neural stem cells (NSCs) based on their physical (size and internal granularity) and fluorescent properties using flow cytometry technology.

Neural stem cells (NSCs) can be isolated and expanded in large-scale, using the neurosphere assay and differentiated into the three major cell types of the central nervous system (CNS); namely, astrocytes, oligodendrocytes and neurons. These characteristics make neural stem and progenitor cells an invaluable renewable source of cells for in vitro studies such as drug screening, neurotoxicology and electrophysiology and also for cell replacement therapy in many neurological diseases. In practice, however, heterogeneity of NSC progeny, low production of neurons and oligodendrocytes, and predominance of astrocytes following differentiation limit their clinical applications. Here, we describe a novel methodology for the generation and subsequent purification of immature neurons from murine NSC progeny using fluorescence activated cell sorting (FACS) technology. Using this methodology, a highly enriched neuronal progenitor cell population can be achieved without any noticeable astrocyte and bona fide NSC contamination. The procedure includes differentiation of NSC progeny isolated and expanded from E14 mouse ganglionic eminences using the neurosphere assay, followed by isolation and enrichment of immature neuronal cells based on their physical (size and internal complexity) and fluorescent properties using flow cytometry technology. Overall, it takes 5-7 days to generate neurospheres and 6-8 days to differentiate NSC progeny and isolate highly purified immature neuronal cells.

1. Basic Set Up Before Proceeding to Cell Culture

2. Isolation, and Expansion (Passaging) of NSCs

To achieve a higher purity of neuronal cells, harvested single cell from the NBA culture can be stained for PSA-NCAM (a marker of early immature neuronal progenitors) and then the positive cells from the neuronal population can be isolated using the FACS machine.

Note: to coat 96 wells, 100 μl of Poly-L- Ornithine working solution (1.5 ml Poly-O and 8.5 ml of sterile PBS) is added to each well and the plate is incubated in a 37 °C incubator for at least one hour. Then, the Poly-O is removed and each well is washed three times with sterile PBS (let the PBS remain in the well for 10 min each time). Use 500 μl of Poly-L- Ornithine working solution / well if 24-well plates are used.

In the neuroblast assay (NBA) differentiation culture, plated cells attach to the tissue culture substrate and grow as a monolayer. Depending on initial cell plating density, the culture will turn into a 90-95% confluent culture after 3-4 days. At this stage, a monolayer of mainly astrocytic cells can be visualized underneath with small round neuronal progenitor cells on top4,5 (Figure 1). After switching the medium to a growth factor free medium, neuronal progenitor cells start dividing rapidly and generate clusters of immature neuroblast cells on top of the astrocytic monolayer in 4-5 days (Figure 2). Flow cytometry analysis of dissociated NBA culture on day 4-5 of differentiation stage, shows two main cell populations; FSClow SSClow and FSChigh SSChigh based on cell size (FSC) and internal granularity (SSC) (Figure 3). Immuno-fluorescent analysis of the sorted cells shows that the neuronal cells are mainly located in the FSClow SSClow populations (with more than 75% of them expressing β-III tubulin), while sorted cells from the FSChigh SSChigh population are mostly GFAP immunoreactive astrocytes (Figure 4). Further purification of immature neuronal cells up to near homogeneity (97%) could be achieved with positive selection of PSA-NCAM IR cells from the FSClow SSClow population (Figure 3, 4). Enriched neuronal cells generated from the NSCs isolated from E14 mouse ganglionic eminences acquire a GABAergic phenotype and express DARPP-32, a marker of medium spiny neurons, upon differentiation (Figure 5). 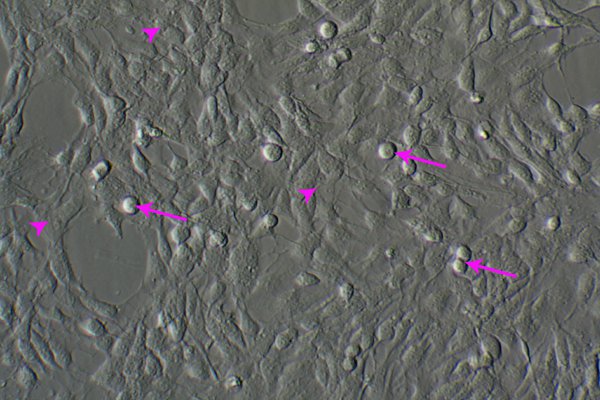 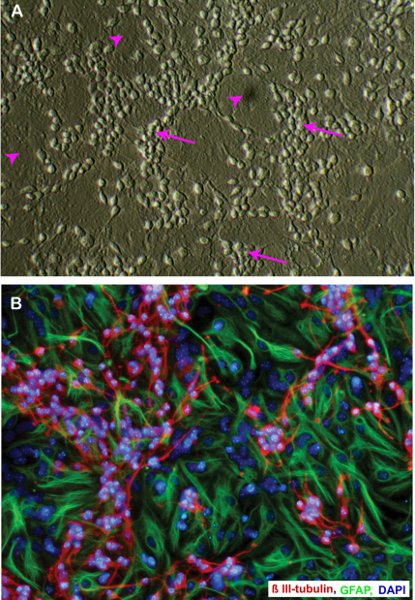 Figure 2. Neuroblast assay culture from E14 mouse neural stem cells on day 4 of differentiation stage: A) Phase contrast, B) Immunofluorescent staining. Note the cluster of immature neuronal cells (arrows in A and β III tubulin staining in B) on top of the astrocytic monolayer (arrow heads in A, GFAP staining in B). Original magnification; 20 x. 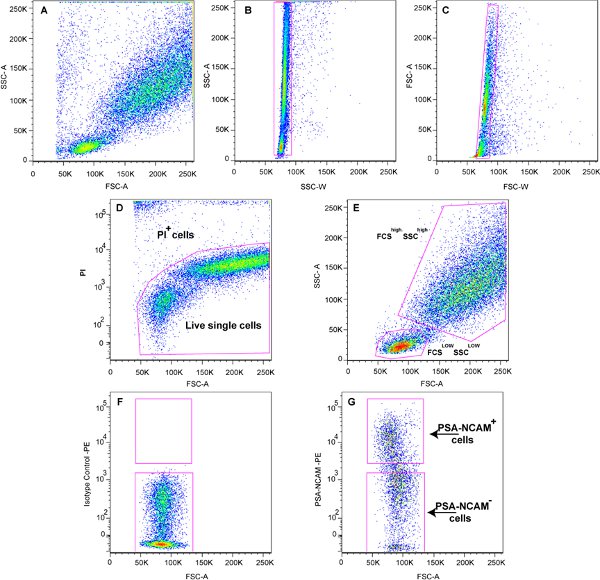 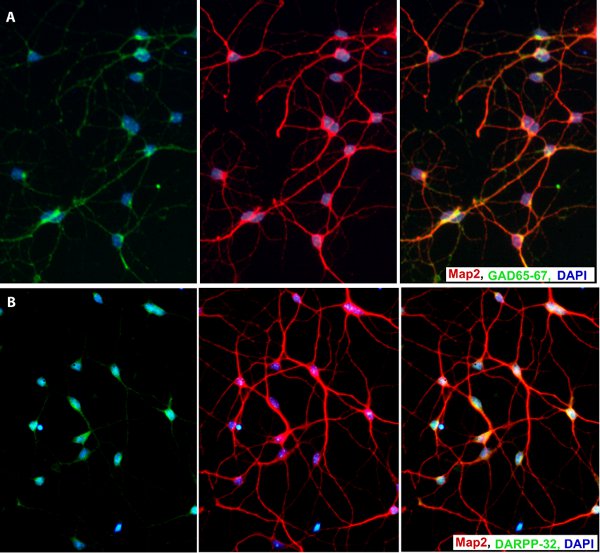 Figure 5. Sorted immature neurons differentiate into GABAergic neurons (A) and express DARPP-32 (B), a marker for medium spiny neurons.

The ability to isolate defined neural cell populations (i.e. neurons, astrocytes and oligodendrocytes) might solve some of the impediments associated with the clinical application of neural stem cells (NSCs). First, it enables us to fully characterize the starting population of donor cells. Second, it allows us to use a particular cell type or a combination of different cell types with a specific ratio, depending on the nature or stage of the disease. Lastly, using highly enriched pre-differentiated neural cell progenitors can dramatically decrease possible uncontrolled proliferation and tumor formation associated with using heterogeneous neural precursors containing bona fide NSC6. Generally differentiation of neural stem cells will result in 5-10% neuronal cells and more than 80% astrocytes. Using the NBA method of differentiation, the percentage of neuronal cells will increase up to 20-30% but still there are lots of astrocytes and other stem and progenitor cells in the culture, which may not be desirable if one would intend to study pure neuronal cells in vitro or to study their therapeutic effect in animal models of neurological diseases. In this protocol, we took advantage of inherent differences in the physical and fluorescent properties of differentiating NSC progeny to purify immature neuronal cells5. Our flow cytometry purification methodology increases the percentage of neuronal cells from 20-30% to 75-97% with no detectable astrocytes and un-differentiated bona fide neural stem and progenitor cells.

Application of this methodology to human NSCs might benefit neuronal cell replacement therapy in neurological disease. This approach could also be useful for in vitro studies that need highly purified neuronal progenitor cells such as drug screening, neurotoxicology, developmental studies and electrophysiology.

To be able to consistently generate high quality immature neurons from NSCs generated from E14 mouse ganglionic eminences, we recommend: