The inoculation of Trypanosoma cruzi in fertile eggs prior to incubation renders the parasite kDNA minicircle integration in embryo cells genome. Crossbreeding reveals the vertical transfer of the mutations to progeny. The kDNA integrates into coding regions at several chromosomes and the chickens die with an inflammatory autoimmune heart disease.

The Trypanosoma cruzi acute infections acquired in infancy and childhood seem asymptomatic, but approximately one third of the chronically infected cases show Chagas disease up to three decades or later. Autoimmunity and parasite persistence are competing theories to explain the pathogenesis of Chagas disease 1, 2. To separate roles played by parasite persistence and autoimmunity in Chagas disease we inoculate the T. cruzi in the air chamber of fertilized eggs. The mature chicken immune system is a tight biological barrier against T. cruzi and the infection is eradicated upon development of its immune system by the end of the first week of growth 3. The chicks are parasite-free at hatching, but they retain integrated parasite mitochondrial kinetoplast DNA (kDNA) minicircle within their genome that are transferred to their progeny. Documentation of the kDNA minicircle integration in the chicken genome was obtained by a targeted prime TAIL-PCR, Southern hybridizations, cloning, and sequencing 3, 4. The kDNA minicircle integrations rupture open reading frames for transcription and immune system factors, phosphatase (GTPase), adenylate cyclase and phosphorylases (PKC, NF-Kappa B activator, PI-3K) associated with cell physiology, growth, and differentiation 3, 5-7, and other gene functions. Severe myocarditis due to rejection of target heart fibers by effectors cytotoxic lymphocytes is seen in the kDNA mutated chickens, showing an inflammatory cardiomyopathy similar to that seen in human Chagas disease. Notably, heart failure and skeletal muscle weakness are present in adult chickens with kDNA rupture of the dystrophin gene in chromosome 1 8. Similar genotipic alterations are associated with tissue destruction carried out by effectors CD45+, CD8γδ+, CD8α lymphocytes. Thus this protozoan infection can induce genetically driven autoimmune disease.

The primers used for PCR amplifications and the thermal conditions are shown in Table 1.

The probes used in Southern blot hybridizations were:

The inoculation of 100 virulent T. cruzi trypomastigotes into the air chamber of fertile chicken eggs does not reduce significantly the ratios of chicks hatched alive. Approximately 60% hatch healthy chicks and 40% may undergo embryo liquefaction or embryo death at hatching. The surviving chicks retain the kDNA minicircle sequence integrated in the genome. However, it is expected that some chicks will die with cardiomegaly and failure in the weeks after hatching. The remaining chicks will grow to outwardly healthy adults. At all stages of life the DNA extracted from their blood mononuclear cells will yield PCR amplification of kDNA, but not nDNA. The targeted-prime TAIL-PCR 3, 4 products that are cloned and sequence will show the kDNA minicircles integrated mainly in coding regions of macrochromosomes 1 to 5. The chickens showing multiple kDNA integrations into genes coding for cell growth and differentiation, immune system regulation factors, and DNA repair are candidates to undergo rejection of self target tissues (Figure 3). For example, the chicken showing kDNA mutation with rupture of the dystrophin gene (Figure 5), coding a protein that binds the cytoskeleton to the cell membrane, is a candidate to develop autoimmune inflammatory cardiomyopathy and failure.

These genomic modifications are not seen in chicks hatched from Lb infected eggs. There are differences between T. cruzi and Lb kDNA minicircles; The T. cruzi kDNA minicircle average 1.4 kb structure with four variable region (VR) interspersed by conserved regions (CR) each presenting CSB1, CSB2, and CSB3 regions, in which CA-rich bent DNA are considered specific sites for initiation of replication, transcription, recombination, and for lateral DNA transfer 3, 4. Contrastingly, the Lb kDNA minicircle (average size 820 bp) contains single CR followed by VR. CR has conserved CSB1 (GGGCGT) and CSB2 (CCCCGTTC) blocks, which are different from those in the T. cruzi minicircles 15, 16, and 17. Considering that Lb CSB3 (GGGGTTGGTGTA) shows 12 nts homology to the T. cruzi it is conceivable that either the Lb kDNA minicircle integrates in a much low frequency, which may not be visible by the techniques used, or that it may, possibly, not integrate in the chicken genome at all. 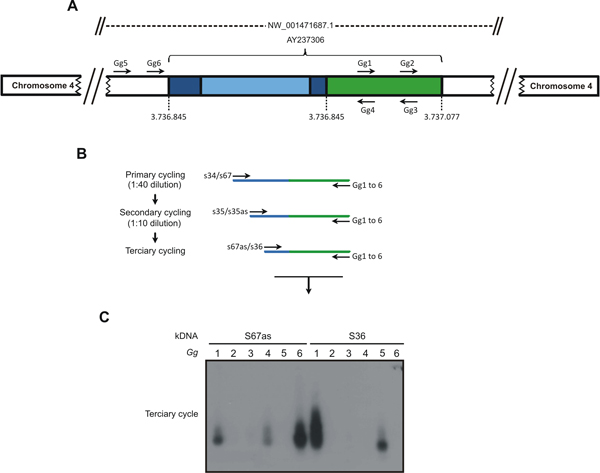 Figure 1. The tpTAIL-PCR strategy used to detect Trypanosoma cruzi kDNA integration into the Gallus gallus genome. A) A chimeric sequence with a fragment of kDNA minicircle conserved (dark blue) and variable (light blue) regions integrated in the locus NW_001471687.1 at chromosome 4 (AY237306) of the chicken 10 genome (green) was used to obtain the host specific primer sets (Gg1 to Gg6). B) The tpTAIL-PCR amplifications were initiated (primary cycle) by annealing of the minicircle-specific S34 or S67 primers in combination with the chicken-specific Gg1 to Gg6 primers. Diluted products provided template for the secondary cycle with the S35 (sense/antisense) primers and the combinations of Gg primers. In the tertiary cycle a dilution of the secondary products was subjected to amplification with kDNA S36 or S67 antisense primers in combination with the Gg primers. C) These amplification products were separated in 1% agarose gels and transferred to nylon membrane, hybridized with the specific kDNA probe. Samples showing positive signal were used for cloning to determine the point of integration. The combinations of kDNA and targeted Gg1 to Gg6 are shown on top of the gel. The sequential PCR reactions amplified target kDNA-host DNA sequences with kDNA minicircles (blue) and the avian sequence (green). (Reprinted from PLoS Neglected Tropical Diseases 3). Please click here to see a larger version of this figure. 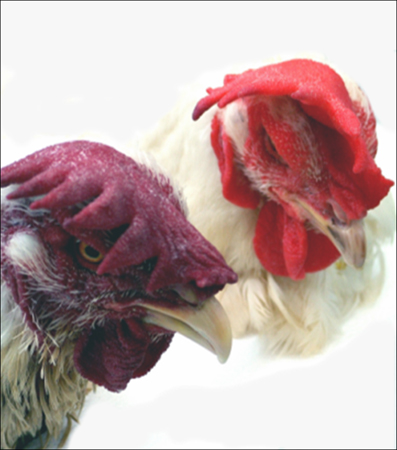 Figure 2. Clinical manifestations of impaired heart function in a 9-month-old chicken genetically modified by the integration of the mitochondrial kDNA minicircle from T. cruzi. The poor blood oxygenation of the mitochondrial kDNA mutated chicken showing a purple comb contrasts with the bright red comb of the control 9-month-old chicken free from heart damage. (Modified from PLoS Neglected Tropical Diseases 3). 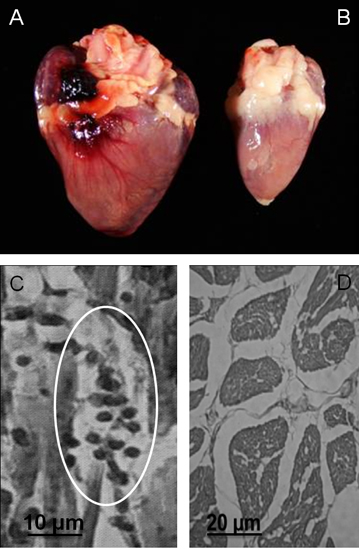 Figure 3. Gross and microscopic pathology in Gallus gallus with kDNA mutations. A) Cardiomegaly in a 9-month-old hen that died of heart failure. B) Control heart from a noninfected 9-month-old hen. C) Rejection of target heart cells by cytotoxic lymphocytes: A minimal rejection unit with lyses of the target cells by immune lymphocytes is depicted (circle). D) Control heart histology (Modified from PLoS Neglected Tropical Diseases 3 ). 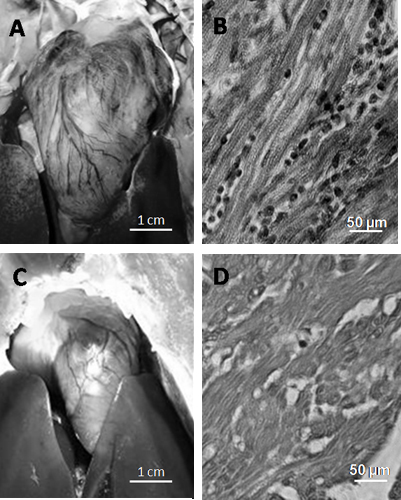 Figure 5. Chagas-like dilated inflammatory cardiomyopathy in a F2 progeny with kDNA integration in the dystrophin gene. A) Dilated heart in a 10-month-old chicken occupying most of the thoracic cavity (heart weight = 16 g). B) Dark round mononuclear cells infiltrates and destroys the myocardium of the kDNA-mutated hen. C) Normal heart size (weight 7 g) of a 10-month-old control chicken. D) Normal histology of a control chicken heart. (Modified from PLoS Neglected Tropical Diseases 3). 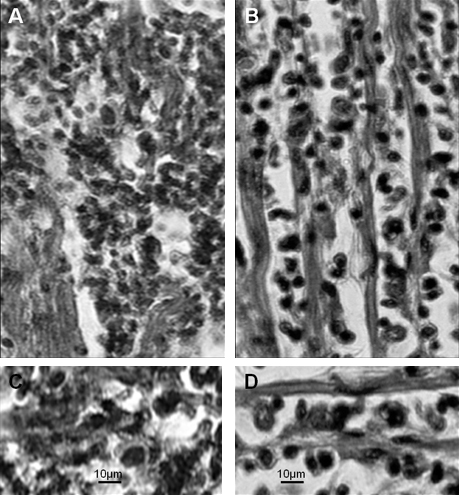 In contrast to mammals susceptible to life-long T. cruzi infections, chickens are refractory to T. cruzi infection. The major advantage of the chicken model system is the elimination of the infection early in the development of the embryonic immune system. Thus, the only parasite DNA remaining within the chicken body is integrated at several loci.

Use of the optimal quantity of virulent T. cruzi trypomastigotes to inoculate fertile egg is the critical step towards obtaining integration of the kDNA minicircles into the chicken embryo genome. The rate of live chicks hatching from eggs inoculated with 100 trypomastigotes is four-fold higher than that obtained with 500 parasites. Care should be taken to inoculate the parasites suspension in 10 μL of culture medium into the egg air chamber. There should be no leakage of egg white. Under optimal conditions, the intracellular parasitic infection takes place within a few hours after incubation and parasite multiplication inside the host cells proceeds for one week; thereafter the infection is eliminated by the innate immunity. The kDNA integration requires a living infection, and the inoculation of naked minicircles into early embryo chicken eggs does not result in integration. The kDNA-positive embryos and controls should be housed under controlled conditions at 37.5 °C and 65% humidity. The chicks are kept in cages for two weeks at 33 °C room temperature. Thereafter the chickens are kept in cages on suspended racks separated by 1.5 meter width aisles in a room at 22 °C with filtered air and positive pressure under constant exhaustion to secure animal welfare conditions. The adults are fed chicken-chow and drink potable running water to achieve full growth and maturity, laying eggs at five months of age. Maintenance of hygienic procedures are essential for reproducibility of results when working with T. cruzi inoculated into fertile chicken eggs.

In the chicken model system the T. cruzi infections are eradicated after development of the immune system in the early period of embryo growth. Additionally to being infection-free, the chicks that hatch from T. cruzi inoculated eggs, in lack of specific antibodies, are tolerant to the parasite antigens. The rejection of the target heart cells by cytotoxic lymphocytes (minimal rejection unit, Figure 3) is seen in the kDNA-mutated chickens showing genotype modifications and breakdown of immunological surveillance 3. The genotypically modified T-cells present accelerated rejection of self tissues in the body. The main lesion site is the heart, which is a hallmark of Chagas disease. The passage from a physiologic (surveillance) to a physiopathologic state is seen in the kDNA-mutated chicken showing clonally proliferation of cytotoxic lymphocytes 3.

This transkingdom model system shows a parasite-induced, genetically-driven autoimmune disease (Figure 6), stemming from genome modifications by the T. cruzi kDNA minicircle integrations. These modifications are not seen in chicks hatched from Lb-inoculated eggs.

This phenomenon suggests that experimental treatment of the inflammatory autoimmune cardiomyopathy in kDNA-mutated chickens may require drug suppression of bone marrow progenitor of specific T-cell phenotype infiltrating the myocardium, and transplantation of histocompatible healthy bone marrow to prevent the rejection of self-tissue.

We are indebted to Nancy R. Sturm, Department of Immunology, Microbiology and Molecular Biology, David Geffen School of Medicine, University of California at Los Angeles, for critical reading the manuscript. The National Council of Research-CNPq, and the Foundation for Research Development-FAPDF, Brazil, supported the study. We thank the technical aid of Alessandro O. Souza, Maria C. Guimaro, Ciro Cordeiro, Ana de Cassia Rosa, Roseneide Alves, and Rafael Andrade, from the University of Brasilia, Brazil.