Sexual crosses and isolation of recombinant progeny are important research tools for the filamentous fungus, Fusarium graminearum, The techniques necessary successfully carry out these processes are presented.

Fusarium graminearum has become a model system for studies in development and pathogenicity of filamentous fungi. F. graminearum most easily produces fruiting bodies, called perithecia, on carrot agar. Perithecia contain numerous tissue types, produced at specific stages of perithecium development. These include (in order of appearance) formation of the perithecium initials (which give rise to the ascogenous hyphae), the outer wall, paraphyses (sterile mycelia which occupy the center of the perithecium until the asci develop), the asci, and the ascospores within the asci14. The development of each of these tissues is separated by approximately 24 hours and has been the basis of transcriptomic studies during sexual development12,8. Refer to Hallen et al. (2007) for a more thorough description of development, including photographs of each stage. Here, we present the methods for generating and harvesting synchronously developing lawns of perithecia for temporal studies of gene regulation, development, and physiological processes. Although these methods are written specifically to be used with F. graminearum, the techniques can be used for a variety of other fungi, provided that fruiting can be induced in culture and there is some synchrony to development. We have recently adapted this protocol to study the sexual development of F. verticillioides. Although individual perithecia must be hand picked in this species, because a lawn of developing perithecia could not be induced, the process worked well for studying development (Sikhakolli and Trail, unpublished).

The most important function of fungal fruiting bodies is the dispersal of spores. In many of the species of Ascomycota (ascus producing fungi), spores are shot from the ascus, due to the generation of turgor pressure within the ascus, driving ejection of spores (and epiplasmic fluid) through the pore in the ascus tip2,7. Our studies of forcible ascospore discharge have resulted in development of a "spore discharge assay", which we use to screen for mutations in the process. Here we present the details of this assay.

F. graminearum is homothallic, and thus can form fruiting bodies in the absence of a compatible partner. The advantage of homothallism is that crossing is not necessary to generate offspring homozygous for a particular trait, a facet that has facilitated the study of sexual development in this species14,7. However, heterothallic strains have been generated that can be used for crossing5,9. It is also possible to cross homothallic strains to obtain mutants for several genes in one strain1. This is done by coinoculating one Petri dish with 2 strains. Along the meeting point, the majority of perithecia will be recombinant (provided a mutation in one of the parent strains does not inhibit outcrossing). As perithecia age, they exude ascospores en masse instead of forcibly discharging them. The resulting spore exudate (called a cirrhus) sits at the tip of the perithecium and can easily be removed for recovery of individual spores. Here we present a protocol to facilitate the identification of recombinant perithecia and the recovery of recombinant progeny.

The goal is to have a lawn of perithecia without any mycelia or spores apparent. The surface of the culture will appear similar to black velvet (Figure 1). At 24 hr after the application of Tween the surface of the agar should have a slight sheen. If mycelia reappear, then the plate may not have been scraped enough to induce perithecium development.

Always provide in your assay several blocks of agar from the wild-type strain. If those do not fire, then either your perithecia are too young or too old. If they are too old, then numerous hyphae will appear over the surface of the culture giving it a whitish hue. If this is not the case, they may be too young, and the assay should be tried again in 24 hr. Occasionally, cultures do not discharge well, and the experiment will have to be repeated. Be sure you perform the assay under the proper light conditions.

Recombinant perithecia should make up the majority of perithecia along the intersection between the two strains. We usually process 10 cirrhi from a cross and at least 4-6 of those should be recombinant. Very occasionally, a mutation prevents a strain from mating. If one of the parents has an aberrant growth phenotype, then more than 2 phenotypes may be present among the colonies on MMTS.

Figure 1. Stages of perithecium development on carrot agar. Left, 72 h after application of Tween. Note red pigment and very young perithecia visible as a black grains on the surface. Right, at 144 h, mature perithecia have formed. Note near-complete absence of superficial mycelia in both cultures. 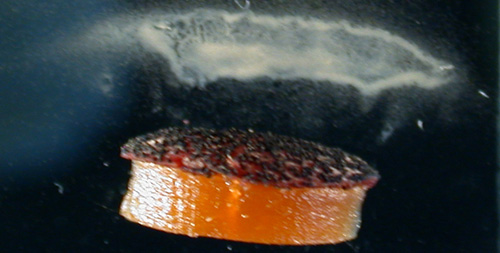 Figure 2. Discharge assay. The orange carrot agar plug is oriented so that spores forcibly discharged from the mature perithecia on its surface can accumulate on the surface of the glass slide. 15 hr accumulation time. 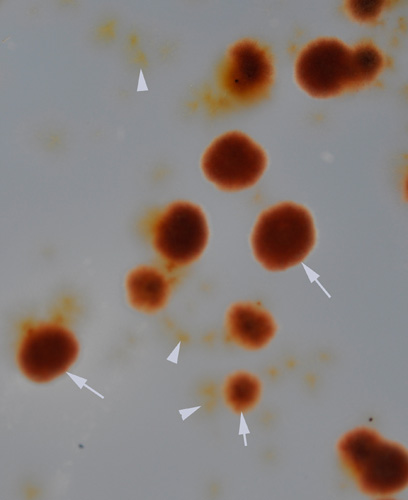 F. graminearum is particularly well adapted to the study of fruiting body development due to the availability of a well-annotated genome (mips.helmholtz-muenchen.de/genre/proj/FGDB/ ;4), and the availability of an Affymetrix-based microarray6. This has facilitated the ability to identify genes important for ascospore discharge7,11,3. The methods presented here will allow the researcher to focus on a discrete set of developmental stages and functions for genetic analysis of the fruiting bodies of F. graminearum. The methods are also easily adaptable to related fungi that can be induced to fruit in culture, and can be used as a standard for development in a variety of other fungal fruiting body types.

The ability to assess a spore firing phenotype can be subtle in species where spores are small and hard to see, such as F. graminearum. The collection of spores on a clean slide facilitates both visual assessment, and quantitative assessment, as spores may be washed off the slide and quantitated. Some fungal species produce a mucilage that surrounds their spore and the spores cannot be rinsed off, but must be counted microscopically as they remain on the slide. We have found this to be true of Sclerotinia sclerotiorum.

This work was supported by a grant from the National Science Foundation (MCB-0923794 to FT).