A murine model of neuromuscular electrical stimulation (NMES), a safe and inexpensive clinical modality, to the anterior compartment muscles is described. This model has the advantage of modifying a readily available clinical device for the purpose of eliciting targeted and specific muscle contractions in mice.

Neuromuscular electrical stimulation (NMES) is a common clinical modality that is widely used to restore1, maintain2 or enhance3-5 muscle functional capacity. Transcutaneous surface stimulation of skeletal muscle involves a current flow between a cathode and an anode, thereby inducing excitement of the motor unit and the surrounding muscle fibers.

NMES is an attractive modality to evaluate skeletal muscle adaptive responses for several reasons. First, it provides a reproducible experimental model in which physiological adaptations, such as myofiber hypertophy and muscle strengthening6, angiogenesis7-9, growth factor secretion9-11, and muscle precursor cell activation12 are well documented. Such physiological responses may be carefully titrated using different parameters of stimulation (for Cochrane review, see 13). In addition, NMES recruits motor units non-selectively, and in a spatially fixed and temporally synchronous manner14, offering the advantage of exerting a treatment effect on all fibers, regardless of fiber type. Although there are specified contraindications to NMES in clinical populations, including peripheral venous disorders or malignancy, for example, NMES is safe and feasible, even for those who are ill and/or bedridden and for populations in which rigorous exercise may be challenging.

Here, we demonstrate the protocol for adapting commercially available electrodes and performing a NMES protocol using a murine model. This animal model has the advantage of utilizing a clinically available device and providing instant feedback regarding positioning of the electrode to elicit the desired muscle contractile effect. For the purpose of this manuscript, we will describe the protocol for muscle stimulation of the anterior compartment muscles of a mouse hindlimb.

The NMES protocol described in this article has been implemented in several mouse strains, including: Wild Type (B6/10), B6.SCID and mdx/SCID mice. Representative results of NMES performed over 4 weeks (20 sessions) in 3-5 month old mdx/SCID are presented.

Animals were humanely euthanized by cervical dislocation while under anesthesia. The tibialis anterior muscle was harvested and immediately frozen in 2 methyl-butane pre-cooled in liquid nitrogen, and stored at -80 °C. Serial cross-sections (10 μm) were obtained and mounted onto slides. Statistical analyses were performed using standard statistical software packages (SPSS, v19.0 software). First, Levene's test was used to assess whether there was equality of variances. Independent samples t-test was then performed to investigate differences between NMES and Control groups.

Hematoxylin and Eosin (H&E) stains were performed to investigate whether the NMES protocol would result in increased injury in the dystrophic muscle. One section was selected, and pictures were obtained using a light microscope (Nikon Eclipse E800; Nikon, Japan). The total number of fibers and the number of fibers with centrally located nuclei were manually counted using the National Institutes of Health (NIH) - developed image analysis software, Image J. There was no significant increase in the regeneration index (number of centrally nucleated fibers/total number of fibers) in the animals submitted to NMES, as compared to controls (p=0.802; Figure 1). This suggests that the application of NMES does not increase the degeneration-regeneration cascade observed in dystrophic animals, and is therefore not likely to be inducing an increased muscle injury.

Immunofluorescent staining for CD31 was performed to investigate the effect of the 4-week NMES protocol on muscle vascularity. Briefly, muscle sections were fixed in 4% formalin and blocked using 5% Horse Serum (HS). Sections were incubated with a rat anti-mouse primary antibody (1:300 dilution in 5% HS) and treated with a 555-labeled goat anti-rat secondary antibody (1:300 dilution in 5% HS). To quantify the total number of CD31 positive cells, one section was selected, and photographed using fluorescent microscopy (Nikon Eclipse E800; Japan). The total number of capillaries was manually counted using Northern Eclipse Software (Empix Imaging Inc.). There was a significant increase in the number of CD31 positive cells in the animals submitted to NMES when compared to controls (p<0.01; Figure 2), indicating that the NMES protocol as described promotes skeletal muscle angiogenesis.

In situ contractile testing: Four weeks after completion of an NMES protocol, contractile testing of the anterior compartment muscles was performed using an in situ testing apparatus (Model 809B, Aurora Scientific Inc, Canada), stimulator (Model 701C, Aurora Scientific Inc, Canada), and force transducer (Aurora Scientific Inc, Canada). Briefly, the peroneal nerve of anesthetized animals was isolated through a small incision lateral to the knee. Mice were then placed supine on a platform and the foot being tested was positioned on the footplate. The hindlimb used for testing was stabilized with cloth tape on the knee and foot. Muscles were stimulated using a hook electrodes inserted beneath the skin. Muscle tetanic contraction was tested at a frequency of 150Hz for 350ms to investigate whether the 4-week NMES protocol would induce improvements in muscle force. Results were normalized to wet muscle weight. There was an approximately 30% increase in the tetanic contraction of animals submitted to NMES, when compared to controls (p=0.005) (Figure 3), suggesting the protocol described improves skeletal muscle strength in mdx/SCID animals. 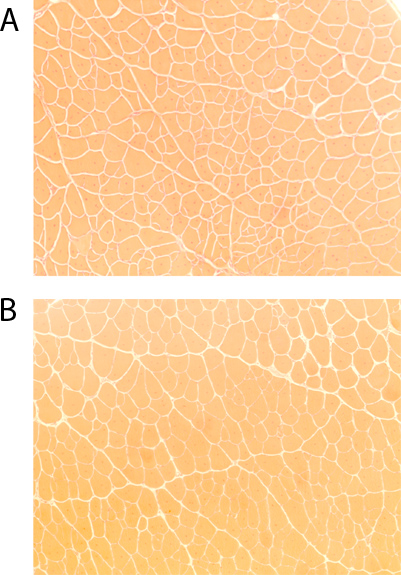 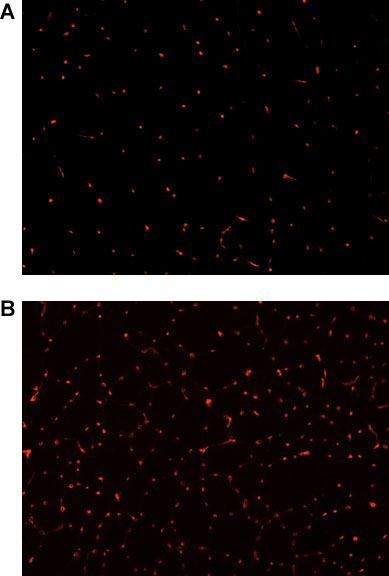 Figure 2. CD31 immunofluorescence (red), as a marker of skeletal muscle vascularity, in the skeletal muscle of dystrophic (mdx)/ immunodeficient mice (4-5 months)(20x magnification) A) untreated controls, B) after 4 weeks of NMES. 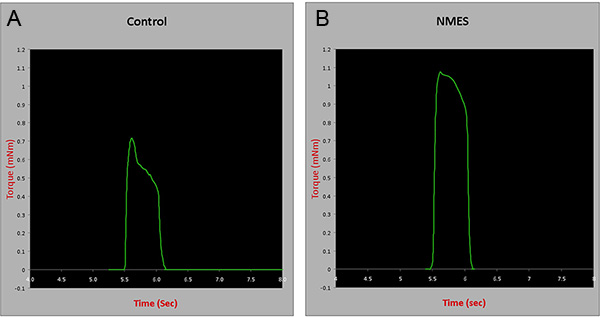 These results suggest that our developed murine model of NMES promotes skeletal muscle angiogenesis (Figure 2) and strengthening (Figure 3), but does not induce skeletal muscle damage (Figure 1).

It should be noted that the stimulation parameters described here have been designed to induce a muscle overloading to the anterior compartment muscles. Just as is the case for clinical scenarios, electrode placement may be adjusted to stimulate other muscle groups, although the muscle response to NMES may be different, depending on fiber type composition. NMES duration, total number of treatment sessions, and total number of repetitions may be modified according to study design.

As with any protocol, this method has limitations that should be noted. In the present study, stimulation was performed over the deep fibular nerve. However, in the clinic, stimulation is typically administered at the motor unit. In the animal model, stimulation of the nerve would require a lower intensity in order to elicit full muscle contraction. Another limitation of the model as presented is that we are unable to obtain information regarding comfort level during the application of NMES, given that the animals are anesthetized. Therefore, the tolerability of comparable intensities in a clinical population is difficult to assess. However, our histological results suggest our NMES model, as described, does not induce muscle injury.

The development of animals models that mimic modalities commonly implemented in the clinic provide us with useful laboratory tools that allows for an improved understanding of cellular and molecular responses to treatment interventions. In addition, such models are useful to conduct pre-clinical studies to both refine existing rehabilitation protocols and develop novel indications.