NADPH oxidase is the major source of reactive oxygen species (ROS) in phagocytes. Because of the ephemeral nature of ROS, it is difficult to measure and monitor ROS levels in living animals. A minimally invasive method for serial quantification of ROS in living mice is described.

NADPH oxidase is a critical enzyme that mediates antibacterial and antifungal host defense. In addition to its role in antimicrobial host defense, NADPH oxidase has critical signaling functions that modulate the inflammatory response 1. Thus, the development of a method to measure in "real-time" the kinetics of NADPH oxidase-derived ROS generation is expected to be a valuable research tool to understand mechanisms relevant to host defense, inflammation, and injury.

Here, we describe a method to quantify ROS production in living mice and to delineate the contribution of NADPH oxidase to ROS generation in models of inflammation and injury. This method is based on ROS reacting with L-012 (an analogue of luminol) to emit luminescence that is recorded by a charge-coupled device (CCD). In the original description of the L-012 probe, L-012-dependent chemiluminescence was completely abolished by superoxide dismutase, indicating that the main ROS detected in this reaction was superoxide anion 14. Subsequent studies have shown that L-012 can detect other free radicals, including reactive nitrogen species 15, 16. Kielland et al. 16 showed that topical application of phorbol myristate acetate, a potent activator of NADPH oxidase, led to NADPH oxidase-dependent ROS generation that could be detected in mice using the luminescent probe L-012. In this model, they showed that L-012-dependent luminescence was abolished in p47phox-deficient mice.

We compared ROS generation in wildtype mice and NADPH oxidase-deficient p47phox-/- mice 2 in the following three models: 1) intratracheal administration of zymosan, a pro-inflammatory fungal cell wall-derived product that can activate NADPH oxidase; 2) cecal ligation and puncture (CLP), a model of intra-abdominal sepsis with secondary acute lung inflammation and injury; and 3) oral carbon tetrachloride (CCl4), a model of ROS-dependent hepatic injury. These models were specifically selected to evaluate NADPH oxidase-dependent ROS generation in the context of non-infectious inflammation, polymicrobial sepsis, and toxin-induced organ injury, respectively. Comparing bioluminescence in wildtype mice to p47phox-/- mice enables us to delineate the specific contribution of ROS generated by p47phox-containing NADPH oxidase to the bioluminescent signal in these models.

Bioluminescence imaging results that demonstrated increased ROS levels in wildtype mice compared to p47phox-/- mice indicated that NADPH oxidase is the major source of ROS generation in response to inflammatory stimuli. This method provides a minimally invasive approach for "real-time" monitoring of ROS generation during inflammation in vivo.

Zymosan is a pro-inflammatory yeast cell wall product and a potent activator of NADPH oxidase 3. We previously showed that intratracheal zymosan induces a more robust neutrophilic lung inflammation and pro-inflammatory cytokine production in p47phox-/- compared to wildtype mice 1. Here, our goal was to compare ROS generation in the lungs of wildtype and p47phox-/- mice following zymosan challenge. At 4 hr after intratracheal zymosan administration, we observed a significant increase in photon emission over the chest in wildtype mice compared to baseline as well as an increase in photon emission in wildtype compared to p47phox-/- mice at 4 h and 24 hr. In contrast, bioluminescence signals in p47phox-/- mice remained at baseline levels at 4 hr after zymosan treatment (Fig.1 A-B). Thus, NADPH oxidase appears to be the major source of ROS generation in the lungs following zymosan administration.

Next, we assessed ROS production in the CLP-induced sepsis model. Sepsis is a life-threatening syndrome associated with end-organ injury, including acute lung injury (ALI) and acute respiratory distress syndrome (ARDS) 4, 5. ROS-mediated injury has been considered to be an important factor driving sepsis-induced multi-organ dysfunction. We found that ROS were significantly increased over the chest (4 hr) and over the abdomen (24 hr) following CLP in wildtype mice compared to baseline. However, ROS levels in p47phox-/- mice were similar to baseline levels at both time points (Fig.2 A-C). These results show that ROS generation in the CLP-induced sepsis mouse model is NADPH oxidase-dependent.

Finally, we used bioluminescent imaging to detect ROS production in a CCl4-induced liver injury model. CCl4 causes hepatocellular necrosis, and has been used to model both acute liver injury and hepatic fibrosis 6. In contrast to the previously described models of inflammation and injury, we found that ROS production in the abdomen was modestly (about 35%) increased over baseline in p47phox-/- mice at 4 h following CCl4 administration. However, the magnitude of CCl4-induced ROS generation was significantly greater in wildtype mice than in p47phox-/- mice (Fig.3 A-B). These data suggest that both p47phox -containing NADPH oxidase-dependent and -independent ROS generation occur in acute CCl4-induced liver injury. 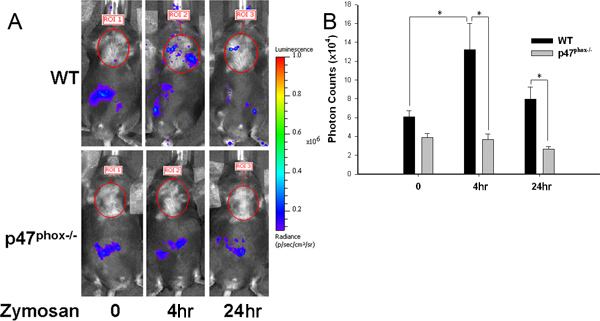 Figure 1. ROS production in lungs after zymosan treatment. A) Representative bioluminescence imaging of ROS production. Note that in addition to the chest, luminescence is detectable over the abdomen in both wildtype and p47phox-/- mice and abdominal luminescence is unchanged by zymosan treatment. B) photon counts from the chest of wildtype and p47phox-/- mice after a single intratracheal (IT) injection of zymosan. Bioluminescence imaging was performed at baseline, 4 hr, and 24 hr. Light emission from the region of interest over the chest was identified using the indicated pseudo-color scale. Results are presented as mean ± SE, n=6-9 per group, *=p<0.05. Click here for larger figure. 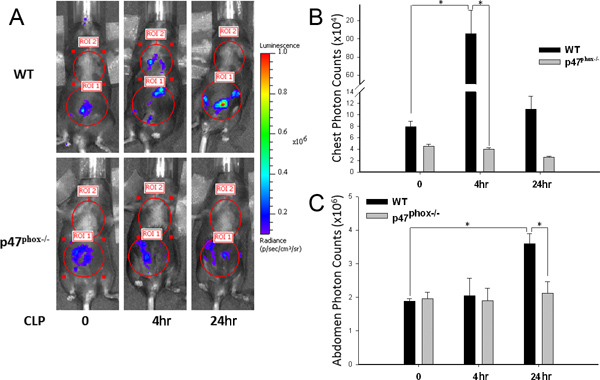 Figure 2. ROS detection following CLP. A) Representative bioluminescence imaging of ROS production, B) photon counts from the chest, and C) photon counts from the abdomen of wildtype and p47phox-/- mice at baseline, 4 hr, and 24 hr after CLP. Results are presented as mean ± SE; n=4-5 per group, *=p<0.05. Click here for larger figure. 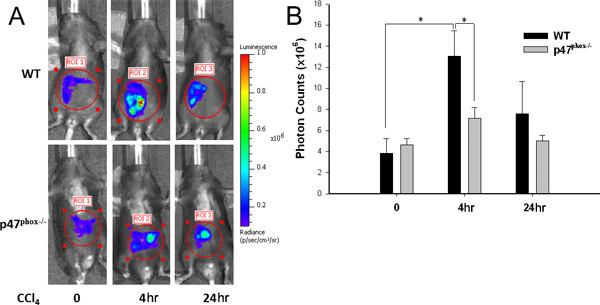 Figure 3. ROS production in abdomen after CCl4-induced liver injury. A) Representative bioluminescence imaging of ROS production and B) photon counts from the abdomen of wildtype and p47phox-/- mice at baseline, 4 hr, and 24 hr after oral CCl4 treatment. Results are presented as mean ± SE; n=4-5 per group, *=p<0.05. Click here for larger figure.

"Real-time" measurement of reactive oxygen species (ROS) in living animals can be achieved by using fluorescent and chemiluminescent probes. While fluorescent probes suffer from having weak signal-to-noise ratios 12, the imaging technique described is more sensitive for detection of light emission following a chemical reaction of ROS with the luminol-based substrate L-012. Like all bioluminescent imaging techniques, this methodology is limited by wavelength-dependent light absorption and scatter by organs and tissues. These experiments were focused on establishing proper experimental conditions for the measurement of ROS in wildtype and p47phox-/- mice. The use of these genetically modified mice enables us to differentiate ROS generated by p47phox-containing NADPH oxidase from ROS generated by other pathways.

Although functional NADPH oxidase containing p47phox is a major source of ROS, other NADPH oxidase isoforms exist, and additional ROS-generating systems, including xanthine oxidase and mitochondrial respiration, can produce ROS. NADPH oxidase and other ROS-generating pathways can have important and interactive effects on antimicrobial host defense and downstream signaling pathways that modulate inflammation and injury 7-10. Using bioluminescence imaging, we were able to measure the kinetics of ROS production in vivo and to delineate the contribution of NADPH oxidase to ROS levels in different inflammatory models.

A limitation of this method relates to spatial resolution of bioluminescence. Although we can measure luminescence within specific anatomic compartments (e.g., thorax, abdomen), it is difficult to localize the anatomic site of luminescence at the organ level. In each of our experimental models we chose 3 time points for bioluminescent measurements: baseline, 4 hr, and 24 hr. We do not know if bioluminescent imaging can identify small differences in ROS generation over shorter intervals of analysis or whether the relationship between in vivo ROS generation and bioluminescence is linear. These issues require further study. In the models used for these studies, we suspect that phagocytic cells, recruited neutrophils and macrophages, are primarily responsible for ROS production via the phagocyte NADPH oxidase system. Future studies in which specific cell types are depleted or bone chimeras are generated could provide additional knowledge about relative levels of ROS generation from different cell populations. Another potential limitation of studies using L-012 is that other radicals (besides ROS) may react with this luminescent probe, reducing specificity for ROS detection in some circumstances.

Following zymosan injection, the lack of ROS production in p47phox-/- mice indicates that NADPH oxidase is the major source of ROS in this model of lung inflammation. CLP is one of the most common animal models of sepsis 11 and bioluminescence imaging revealed increased ROS signals in both the lung and abdomen that were NADPH oxidase-dependent. In contrast to the zymosan and CLP models, ROS were increased in the abdomen of both of wildtype and p47phox-/- mice compared to baseline, but to a greater degree in wildtype mice, indicating that CCl4 induces ROS production by p47phox-containing NADPH oxidase and other mechanisms.

In summary, our data show that a luminol-based bioluminescence imaging method for the detection of ROS can be valuable tool for research on the regulation and consequences of ROS production in vivo.

This work was funded by NIH RO1 AI079253 and Department of Veterans Affairs.