Postoperative ileus (POI) is a complication of abdominal surgery leading to increased morbidity and a prolonged hospital stay. Because prophylactic or therapeutic strategies are lacking intensified research is necessary. Therefore we established a standardized and feasible mouse model to investigate the pathophysiology of POI and to study potential therapeutic options.

Inflammation of the gastrointestinal tract is a common reason for a variety of human diseases. Animal research models are critical in investigating the complex cellular and molecular of intestinal pathology. Although the tunica mucosa is often the organ of interest in many inflammatory diseases, recent works demonstrated that the muscularis externa (ME) is also a highly immunocompetent organ that harbours a dense network of resident immunocytes.1,2 These works were performed within the standardized model of intestinal manipulation (IM) that leads to inflammation of the bowel wall, mainly limited to the ME. Clinically this inflammation leads to prolonged intestinal dysmotility, known as postoperative ileus (POI) which is a frequent and unavoidable complication after abdominal surgery.3 The inflammation is characterized by liberation of proinflammatory mediators such as IL-64 or IL-1β or inhibitory neurotransmitters like nitric oxide (NO).5 Subsequently, tremendous numbers of immunocytes extravasate into the ME, dominated by polymorphonuclear neutrophils (PMN) and monocytes and finally maintain POI.2 Lasting for days, this intestinal paralysis leads to an increased risk of aspiration, bacterial translocation and infectious complications up to sepsis and multi organ failure and causes a high economic burden.6

In this manuscript we demonstrate the standardized model of IM and in vivo assessment of gastrointestinal transit (GIT) and colonic transit. Furthermore we demonstrate a method for separation of the ME from the tunica mucosa followed by immunological analysis, which is crucial to distinguish between the inflammatory responses in these both highly immunoactive bowel wall compartments. All analyses are easily transferable to any other research models, affecting gastrointestinal function.

Male C57Bl6/J mice with a mean weight of 25 g were obtained from Harlan Winkelmann (Borchen, Germany). All experiments were performed in accordance with the federal law regarding the protection of animals. The principles of laboratory animal care were followed. Animals were maintained on a 12-hr light/dark cycle and provided with commercially available rodent chow and tap water ad libitum. Animals should be housed at least 7 days after arrival in your animal facility before experiments. Note that all experiments can be easily adapted to rats or other species and with slight modifications into large animal models.

5. Histochemical Analysis of Isolated ME Specimens

6. Organ Culture of ME 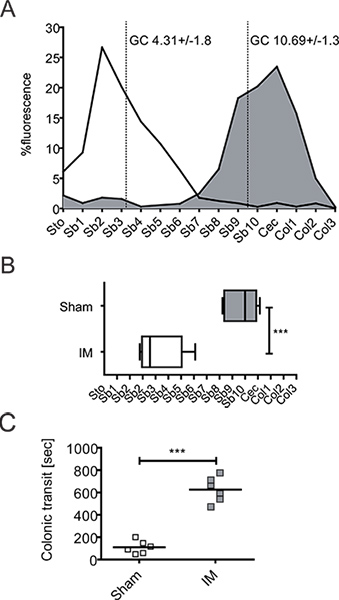 Figure 1. Effect of IM on GIT (A+B) and colonic transit (C) GIT was measured as the percent of non-absorbable fluorescein-labeled dextran in 15 gastrointestinal segments-stomach (Sto), small intestine (SI 1-9), cecum (Cec), and colon (Co)-90 min after oral ingestion. Colonic transit was measured as the time from pulling out the fistula probe until excretion of a 2 mm glass bead. (A)Gastrointestinal distribution of fluorescein isothiocyanate- dextran after sham operation or IM. In sham operated animals most of the marker is located in the cecum or the proximal colon compared with proximal jejunal location in manipulated animals. Dotted lines indicate calculated GC. (B) Calculation of the GC demonstrated a prolonged gastrointestinal transit time after IM. (C) Colonic transit time showed a significant delay in IM mice compared with sham operated animals. GC for the 15 intestinal segments are displayed as mean (n=5). Colonic transit times were displayed mean with all individual values (n=6). *** = p<0.001, Student's t-test. 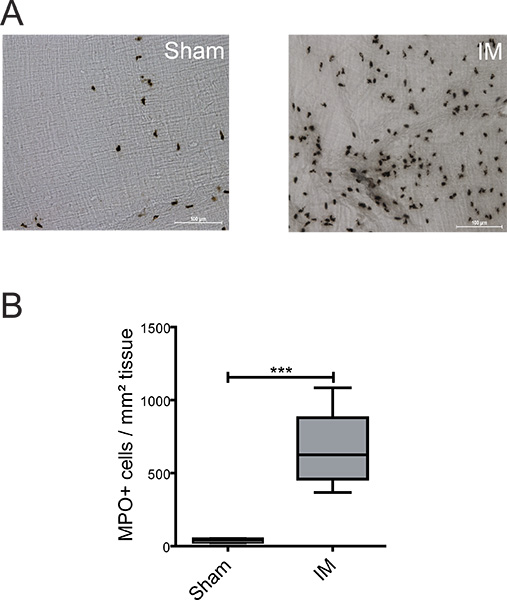 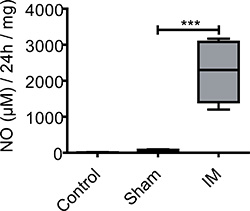 Figure 3. NO production in culture supernatants of ME. Muscle specimens from unoperated controls, sham operated and IM mice were taken 24 hr postoperatively and cultured for 24 hr. Untreated mice showed only a very low basal production of NO. After laparotomy NO liberation is increased without measuring significant differences between the control group and sham operated mice. 24 hr after IM NO production is dramatically increased compared with untreated or sham operated mice. n= 5 animals per group. *** = p<0.001, 1 way ANOVA.

A comparative study analyzing different levels of IM (small bowel eventration for 10 min versus gently inspection of the small bowel using two cotton applicators versus IM with evacuation of small bowel content into the cecum) revealed a correlation between the extent of surgical manipulation and POI. Compared with the other groups IM showed the highest amount of leukocytes in the ME (PNMs, macrophages and mast cells) resulting in prolonged and severe POI.8.

When establishing the model of IM, standardized operation and strength of bowel manipulation are critical steps. Touching the mesentery during this procedure must be strictly avoided to prevent hemorrhages. Insufficient strength during IM will result in a lack of small bowel distension. IM technique and strength varies between different surgeons can results in significant variation of POI occurrence. The same operator should manipulate all animals in one experiment.

Analyzing GIT and colonic transit in vivo is critical and must be performed carefully. Each animal should be housed during the procedure in darkened cages and in a silent room. Animals should be housed at least 7 days after arrival in the animal facility to adept to the environment (food, water, rooms, light dark cycles, immunological conditions). Measurement of both, GIT and colonic transit, allows one also to distinguish between intestinal inflammation and paralysis in treated and non-treated areas.9 Another sophisticated method of in vivo motility recordings in awake rodents was described by Konigsrainer et al. 10 using strain gauge transducers placed on stomach, jejunum and colon. The great advantage of this method is that motility disturbances can be examined independently and continuously in different parts of the gastrointestinal tract in the same animal on consecutive days. However the production of strain gauge transducers and the necessary operation to implant them are elaborate compared to the GIT.

In POI, the dissemination of intestinal paralysis is known as gastrointestinal field effect.11 A previous work of our group shows by the use of the present methods that immunocytes from intestinally manipulated small bowel disseminate to the unmanipulated colon.12

The surgical procedure should not result in any death or major complication (like hemorrhage or peritonitis). Measurement of GIT and PMN infiltrates in ME whole mounts demonstrates that IM is a highly reproducible and feasible model to induce POI in rodents.

Fixation and myeloperoxidase staining must be performed immediately after organ harvesting. Longer storage of the samples in aqueous buffer results in elution of myeloperoxidase from the tissue.

Measurement of nitric oxide is one example of mediator release from organ cultures: As shown before intestinal manipulation resulted in an upregulation of iNOS in macrophages of the ME leading to an excessive liberation of NO and intestinal dysmotility.5 By measuring the concentration of NO in the supernatant of cultured ME a statement about the inflammatory extent or the efficacy of therapeutics is possible. Several other molecules (Il-6, TNF-alpha etc) can be easily examined in the supernatants of cultured tissue by classical ELISA or multiplex approaches like Luminex Multiplex Immunoassay13 (Invitrogen, Carlsbad, CA, USA).

In summary, IM is a reliable and valuable model inducing bowel inflammation and subsequent motility disturbances. The simple mechanical separation of ME and tunica mucosa allows researchers to distinguish between the effect in both bowel wall compartments, that is of major interest since the intestinal ME has been shown to be a highly immunological active tissue. In vivo analysis of GIT and colonic transit has been developed as gold standards in detection and quantification of intestinal motility disturbances.