A multi-faceted approach to investigating functional changes to hippocampal circuitry is explained. Electrophysiological techniques are described along with the injury protocol, behavioral testing and regional dissection method. The combination of these techniques can be applied in similar fashion for other brain regions and scientific questions.

Traumatic Brain Injury (TBI) afflicts more than 1.7 million people in the United States each year and even mild TBI can lead to persistent neurological impairments 1. Two pervasive and disabling symptoms experienced by TBI survivors, memory deficits and a reduction in seizure threshold, are thought to be mediated by TBI-induced hippocampal dysfunction 2,3. In order to demonstrate how altered hippocampal circuit function adversely affects behavior after TBI in mice, we employ lateral fluid percussion injury, a commonly used animal model of TBI that recreates many features of human TBI including neuronal cell loss, gliosis, and ionic perturbation 4-6.

Here we demonstrate a combinatorial method for investigating TBI-induced hippocampal dysfunction. Our approach incorporates multiple ex vivo physiological techniques together with animal behavior and biochemical analysis, in order to analyze post-TBI changes in the hippocampus. We begin with the experimental injury paradigm along with behavioral analysis to assess cognitive disability following TBI. Next, we feature three distinct ex vivo recording techniques: extracellular field potential recording, visualized whole-cell patch-clamping, and voltage sensitive dye recording. Finally, we demonstrate a method for regionally dissecting subregions of the hippocampus that can be useful for detailed analysis of neurochemical and metabolic alterations post-TBI.

These methods have been used to examine the alterations in hippocampal circuitry following TBI and to probe the opposing changes in network circuit function that occur in the dentate gyrus and CA1 subregions of the hippocampus (see Figure 1). The ability to analyze the post-TBI changes in each subregion is essential to understanding the underlying mechanisms contributing to TBI-induced behavioral and cognitive deficits.

The multi-faceted system outlined here allows investigators to push past characterization of phenomenology induced by a disease state (in this case TBI) and determine the mechanisms responsible for the observed pathology associated with TBI.

*Note: Anesthetization using a Bell Jar can only be implemented for terminal procedures (such as the brain dissection described herein).

Our experiments typically begin with behavioral data to confirm the expected cognitive deficits that exist in brain-injured mice. We employ contextual conditioned fear response testing as it is a hippocampal dependent behavior that is reliable and requires only one training session and one testing session. The data depicted in Figure 2 represents behavioral testing to measure anterograde memory; however, the test can also be used to measure retrograde memory if the training session is performed before the injury.

Field excitatory postsynaptic potentials (fEPSPs) are measured to determine the net synaptic efficacy of a large population of cells (Figure 3A). We commonly employ three different types of stimulation patterns, each affording its own results and conclusions. First, by increasing the stimulation intensity through a series of steps, we create an input/output curve (Figure 3B/C).

Next, by delivering two stimulations of the same intensity separated by a brief delay (usually 50 msec) we investigate potential alterations in synaptic vesicle release probability.; Additionally, we often perform long-term potentiation (LTP) experiments. After establishing a baseline response, brief high frequency stimulation (usually 100Hz) at the same intensity is delivered, causing an intracellular cascade that leads to a potentiated synaptic response when normal stimulation is resumed.

Electrical activity from whole-cell patch-clamped cells can be recorded in two modes. In voltage clamp mode, the experimenter controls the membrane voltage of the patch-clamped cell in reference to the bath, via computer software associated with the amplifier. In this case currents mediating postsynaptic events are recorded, providing information about presynaptic release frequency, number of postsynaptic receptors activated and vesicular neurotransmitter concentration (Figure 4A). In current clamp mode the experimenter manipulates injected current and measures the voltage response. This can be useful to determine characteristics of the action potential, such as action potential threshold and half-width. These characteristics allow for the functional categorization of neurons as excitatory or inhibitory based on their action potential firing patterns (Figure 4B). In order to verify the cellular identity we recommend filling cells with Lucifer Yellow after recording and visually confirming identity by the presence or absence of dendritic spines. (Figure 4C, D).

An example of results from an experiment using voltage sensitive dye to measure changes in membrane voltage is depicted in Figure 5. In this case, a stimulating electrode has been placed in the Schaffer collateral pathway and the resulting neuronal activity in area CA1 is analyzed. Voltage sensitive dye does not report absolute values of membrane voltage, but rather the change in voltage from a baseline condition without stimulation. However, analyses comparing two conditions (e.g. brain-injured vs. sham-operated) can be used to determine the spatiotemporal parameters of physiological alterations that cannot be measured using fEPSPs or whole-cell patch-clamp recording. 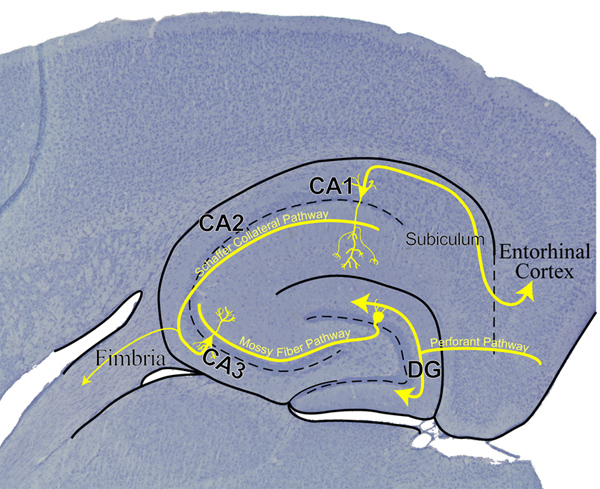 Figure 1. Hippocampal Circuit Diagram. A horizontal section through the hippocampus. The major pathways through the hippocampus are shown in yellow. The axons from neurons in the entorhinal cortex project via the perforant pathway into the dentate gyrus forming synapses with the dendrites of dentate gyrus granule cells. Granule cell axons project via the mossy fiber pathway to CA3 where they form synapses with the dendrites of CA3 neurons. The axons of CA3 neurons project via the Schaffer collateral pathway onto the dendrites of CA1 pyramidal cells. The axons of CA1 pyramidal cells project out of the hippocampus through the subiculum. Note: Also depicted are CA3 pyramidal cell axon collaterals projecting to the contralateral hippocampus via the fimbria. (CA1: Cornu Ammonis 1, CA2: Cornu Ammonis 2, CA3: Cornu Ammonis 3, DG: Dentate Gyrus, dashed line indicates cell body layer, solid line indicates structural boundaries.) 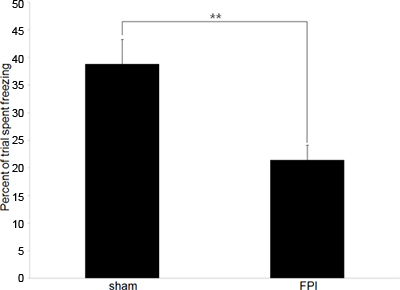 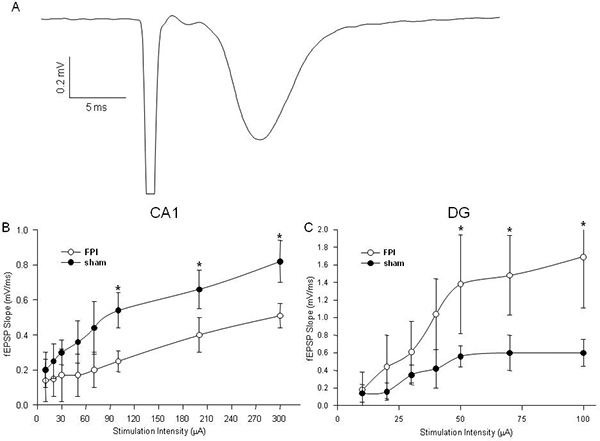 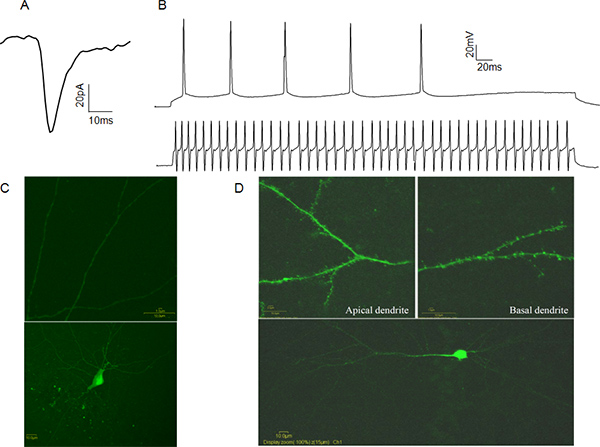 Each technique outlined above contributes to the greater understanding of the underlying mechanism causing the observed behavioral deficit. By combining the unique information gained from each method we are able to examine the biological mechanisms with more precision.

Measuring fEPSPs is useful for quantifying the net synaptic efficacy of large, spatially defined regions of neurons. It also can provide information about the potential of a group of cells to undergo synaptic plasticity, a neural correlate of learning and memory. It is a useful first point of electrophysiological analysis as it is technically straightforward and provides information on broader measures of circuit function.

In contrast to fEPSPs, whole-cell patch-clamp recording provides detailed information about the electrophysiological parameters of a single cell. It is a very diverse technique as numerous different parameters and types of synaptic inputs can be measured depending on the recording conditions (pharmacological agents in the pipette or bath, holding voltage, recording mode, etc.). For example, whole-cell patch-clamp recording can be used to differentiate the relative contributions of excitatory and inhibitory synaptic transmission to an observed difference in net synaptic efficacy as described by fEPSPs.

Voltage sensitive dye imaging experiments augment the knowledge gained by the more traditional electrophysiological techniques described above by providing information about the spatiotemporal dynamics of circuitry changes. The spatiotemporal profile of any alterations can be used to generate hypotheses about the potential cell types that may be involved in generating circuit dysfunction, which can then be analyzed through more targeted approaches, like whole-cell patch-clamping.

In our case, we and others have previously demonstrated subregion specific changes in net synaptic efficacy 7-9, which led to characterizing the inability to generate LTP in CA1 following TBI 10. Further studies employed a mix of molecular biology techniques and electrophysiology to investigate the mechanism behind the observed imbalance of excitatory/inhibitory synaptic transmission 11. Importantly, these studies employed behavior not only to demonstrate a cognitive impairment post-TBI, but also to validate the effectiveness of a dietary treatment strategy derived from the results gained from using our combinatorial approach.

Nothing about this multi-faceted system restricts its application to the field of TBI or its region of interest to the hippocampus. Indeed, the combining of this set of tools is likely to lead to biomechanistic descriptions of observed differences in behavior in a number of neurological diseases.

The authors would like to thank Elliot Bourgeois for his technical assistance. This work was funded by the National Institutes of Health grants R01HD059288 and R01NS069629.