Optical trapping is a technique for immobilizing and manipulating small objects in a gentle way using light, and it has been widely applied in trapping and manipulating small biological particles. Ashkin and co-workers first demonstrated optical tweezers using a single focused beam1. The single beam trap can be described accurately using the perturbative gradient force formulation in the case of small Rayleigh regime particles1. In the perturbative regime, the optical power required for trapping a particle scales as the inverse fourth power of the particle size. High optical powers can damage dielectric particles and cause heating. For instance, trapped latex spheres of 109 nm in diameter were destroyed by a 15 mW beam in 25 sec1, which has serious implications for biological matter2,3.

A self-induced back-action (SIBA) optical trapping was proposed to trap 50 nm polystyrene spheres in the non-perturbative regime4. In a non-perturbative regime, even a small particle with little permittivity contrast to the background can influence significantly the ambient electromagnetic field and induce a large optical force. As a particle enters an illuminated aperture, light transmission increases dramatically because of dielectric loading. If the particle attempts to leave the aperture, decreased transmission causes a change in momentum outwards from the hole and, by Newton's Third Law, results in a force on the particle inwards into the hole, trapping the particle. The light transmission can be monitored; hence, the trap can become a sensor. The SIBA trapping technique can be further improved by using a double-nanohole structure.

The double-nanohole structure has been shown to give a strong local field enhancement5,6. Between the two sharp tips of the double-nanohole, a small particle can cause a large change in optical transmission, thereby inducing a large optical force. As a result, smaller nanoparticles can be trapped, such as 12 nm silicate spheres7 and 3.4 nm hydrodynamic radius bovine serum albumin proteins8. In this work, the experimental configuration used for nanoparticle trapping is outlined. First, we detail the assembly of the trapping setup which is based on a Thorlabs Optical Tweezer Kit. Next, we explain the nanofabrication procedure of the double-nanohole in a metal film, the fabrication of the microfluidic chamber and the sample preparation. Finally, we detail the data acquisition procedure and provide typical results for trapping 20 nm polystyrene nanospheres.

The principle of the SIBA trapping technique is illustrated in Figure 1. Figure 2 is a schematic of the experimental setup.

For this section of the procedure, refer to the optical trapping kit manual9 or the optical force measurement module manual10 for details on setting up the kits. Note that an avalanche photodiode (APD) is used instead of a quadrant position detector. For screws not included in the optical trapping kit, use the ones in the cap screw and hardware kit (Thorlabs, HW-KIT2). Eye protection should be worn at all times when the laser is on. Make sure the beam is contained within a safe area and reflective accessories, such as jewelry, should be avoided. Also, electrostatic discharge protection is advisable when handling laser diodes.

A process flow diagram for fabricating the microfluidic chamber is shown in Figure 4.

A typical acquisition trace is shown in Figure 5a. A trapping event is characteristically sudden, with a sharp edge, showing a clear switch between two transmission power levels. As particles are subject to Brownian motion, the trapping events will occur randomly. For 20 nm particles, transmission changes from trapping were typically around 5-10 % and trapping times, around 10-300 sec. The typical time to achieve a trapping event for the power and concentration outlined above is on the order of a minute. Due to steric hindrance it is uncommon to see multiple particle trapping simultaneously, although once a particle is released, it is typically followed by a subsequent trapping event. Depending on the quality of the results, there may be some increase in signal noise in the trapped state. This noise increase comes from the Brownian motion of the trapped particle. Without the trapped particle, this noise source is not present.

Some artifacts may show up in the results which are not indicative of trapping events. Results showing drifting, slow changes in the transmission over a period of minutes as shown in Figure 5b, should be discarded. Other artifacts may also be present such as inconsistent transmission changes, excessive noise or no trapping at all. For example, bubbles can cause discontinuous intensity jumps if care is not taken to ensure that the chamber is bubble-free. These bubbles will respond differently to the trapping events in terms of dynamic behavior and intensity change, and so they are readily identifiable. Such symptoms could be caused by a poor double-nanohole structure, contaminants or mechanical vibrations. A quiet, low-activity setting is highly recommended to place this setup. Also, allowing laser and stage to settle a few minutes after aligning can help as well. 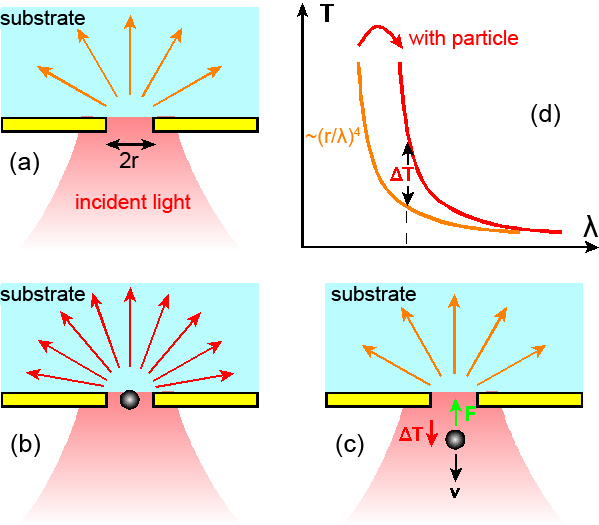 Figure 1. Subwavelength aperture optical transmission: a) Without particle; b) Increased transmission due to dielectric particle; c) If particle attempts to leave, the decrease in light momentum (ΔT) will cause a force (F) on the particle as to pull it back into the hole; d) Red-shifting of the transmission curve caused by the particle, leading to the change in transmission ΔT. 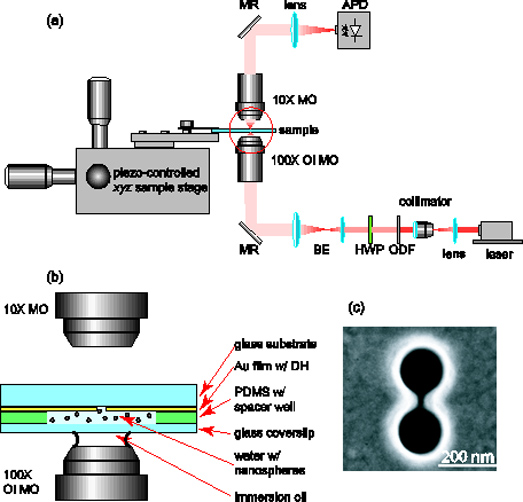 Figure 3. a) Example bitmap figure used in the FIB fabrication; b) A SEM image of a double-nanohole. 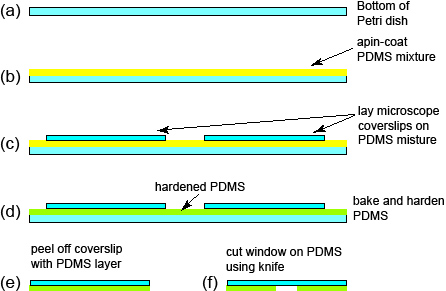 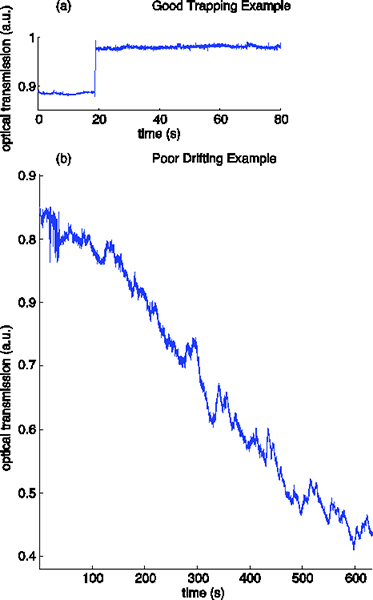 The current setup has effective trapping abilities owing to the structure of the nanohole. This nanohole traps ~10 nm-scale dielectric particles at low optical intensities. Other novel optical traps include optical dipole antennas11, whispering-gallery-mode optical resonators12,13 and waveguides14; however, they typically operate in the perturbative regime, which is limited by the inverse fourth order scaling of the required optical power versus particle size, unlike the SIBA and double-nanohole trap. Alternative aperture shapes have also been presented for trapping, such as a rectangular plasmonic nanopore15. Other favorable qualities shown by the double-nanohole trap include particle size-selective behavior7, a single trapping location (to limit multi-particle trapping) and ease of fabrication16. As an alternative to using a FIB, double-nanoholes can be fabricated by using a colloidal lithography6.

Trapping of biological materials of large polarizability and size has included bacteria3, living cells17,2,18, the tobacco mosaic virus3 and manipulation and stretching of DNA strands tethered at the ends with large dielectric particles19; however, direct trapping of smaller biological samples without tethering remains challenging. This trapping configuration is capable of trapping small dielectric particles at lower light intensities than conventional light tweezers and the circular nanohole, allowing small biological particles to be held for long periods of time without damage or tethering. Also, the trapping events exhibit a high signal-to-noise ratio allowing this setup to work as a sensitive sensor and detect the smallest biological particles, such as viruses and proteins. In fact, 20 nm polystyrene spheres have a refractive index of 1.59 which is comparable to the smallest biological particles such as viruses. This method could become a reliable and mature technique for immobilization and manipulation of nanoparticles, including biological particles.

Applications of this technique include integration into a microfluidic environment. Instead of a single microfluidic chamber, a channel would be used to dynamically control the environment, ideal for refractive index sensing. Such a setup would be set in a single microfluidic chip leading to a more stable and robust setup and faster analysis of solutes. Another option is development of a fluorescence detection scheme for characterization of single fluorescent-tagged viruses, semiconductor quantum dots and green fluorescent proteins. This setup also has potential for modification into a biosensor for a single virus or protein, allowing very small samples to be analyzed. Drug discovery21 and disease and infection detection22 would benefit from a single protein detector. Raman spectroscopy can be incorporated for detection of Raman signals of particles and single binding events. The double-nanohole structure allows strong local field enhancements at the tips, appropriate for tip-enhanced Raman spectroscopy23. A highly specific label-free method of material characterization would also be possible using Raman spectroscopy24.

Production and Free Access to this article is sponsored by Thorlabs.

We acknowledge Thorlabs for sponsoring this publication and funding from the Natural Science and Engineering Research Council (NSERC) of Canada Discovery Grant. We thank Bryce Cyr and Douglas Rennehan for production assistance in the making of this video article.