Sequential photo-bleaching provides a non-invasive way to label individual SCs at the NMJ. The NMJ is the largest synapse of the mammalian nervous system and has served as guiding model to study synaptic structure and function. In mouse NMJs motor axon terminals form pretzel-like contact sites with muscle fibers. The motor axon and its terminal are sheathed by SCs. Over the past decades, several transgenic mice have been generated to visualize motor neurons and SCs, for example Thy1-XFP1 and Plp-GFP mice2, respectively.

Along motor axons, myelinating axonal SCs are arranged in non-overlapping internodes, separated by nodes of Ranvier, to enable saltatory action potential propagation. In contrast, terminal SCs at the synapse are specialized glial cells, which monitor and promote neurotransmission, digest debris and guide regenerating axons. NMJs are tightly covered by up to half a dozen non-myelinating terminal SCs - these, however, cannot be individually resolved by light microscopy, as they are in direct membrane contact3.

Several approaches exist to individually visualize terminal SCs. None of these are flawless, though. For instance, dye filling, where single cells are impaled with a dye-filled microelectrode, requires destroying a labelled cell before filling a second one. This is not compatible with subsequent time-lapse recordings3. Multi-spectral "Brainbow" labeling of SCs has been achieved by using combinatorial expression of fluorescent proteins4. However, this technique requires combining several transgenes and is limited by the expression pattern of the promoters used. In the future, expression of "photo-switchable" proteins in SCs might be yet another alternative5. Here we present sequential photo-bleaching, where single cells are bleached, and their image obtained by subtraction. We believe that this approach - due to its ease and versatility - represents a lasting addition to the neuroscientist's technology palette, especially as it can be used in vivo and transferred to others cell types, anatomical sites or species6.

In the following protocol, we detail the application of sequential bleaching and subsequent confocal time-lapse microscopy to terminal SCs in triangularis sterni muscle explants. This thin, superficial and easily dissected nerve-muscle preparation7,8 has proven useful for studies of NMJ development, physiology and pathology9. Finally, we explain how the triangularis sterni muscle is prepared after fixation to perform correlated high-resolution confocal imaging, immunohistochemistry or ultrastructural examinations.

An example of a triangularis sterni explant ready for imaging dish is shown in Figure 1G. This explant is particularly suitable for imaging NMJs ex vivo as the triangularis muscle consists only of a few layers of muscle fibers. This allows obtaining high resolution images from explants derived from transgenic mouse lines that highlight either SCs (Plp-GFP2) and/or axons (Thy1-XFP1). Critical factors for high quality imaging include: (i) avoiding touching the triangularis muscle during explant preparation to prevent muscle fiber injury; (ii) selecting superficial and flat synapses to reduce depth-associated aberrations, (iii) not overheating the sample (> 37 °C) and keeping the sample well oxygenated, (iv) potentially stopping the superfusion during imaging to reduce drift or vibration; (v) carefully placing superfusion tubing and temperature probes to avoid touching the sample, as well as keeping the underside of the dish dry to prevent drift; (vi) balancing comprehensive bleaching with avoiding "collateral" signal loss in off-target SCs to maximize contrast. Muscle twitching and axon fragmentation are frequently observed phenomena, if the explant is damaged and unhealthy. Instability of the preparation results in blurry projections of confocal stacks. However, once the described sequential photo-bleaching technique works well, it reveals the morphology of single terminal SC in considerable detail (Figure 2F). The revealed morphology of single terminal SCs can be quite surprising and is not easily predicted before bleaching. Moreover, the degree of SC motility within the NMJ cannot be revealed without labeling single cells.

Following live microscopy, the triangularis sterni explant can be fixed and stained for any marker of interest (Figure 3). For this, live imaged cells can be tracked back using the map created beforehand (Figure 2G-I) and scanned at high resolution in the fixed tissue. Generally standard methods for immunohistochemistry can be used - one caveat here is the fact that antibody penetration can be quite limited in myelinated axons and requires very long antibody incubation times. Again, choosing superficial NMJs and removing fat residues from the fixed muscle well (without ripping off the nerves) helps to avoid this pitfall. 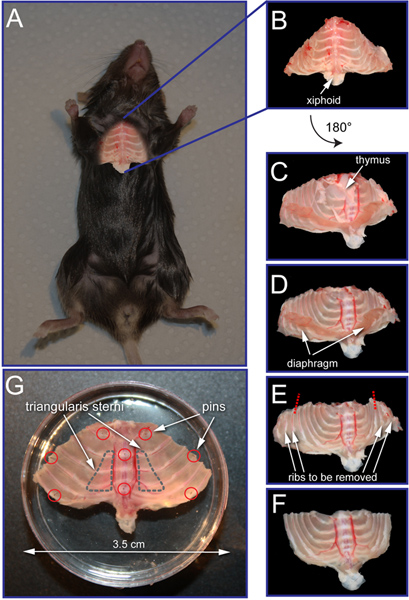 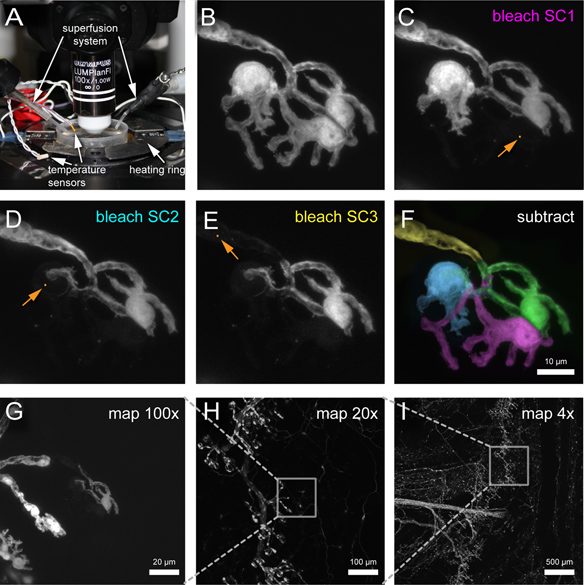 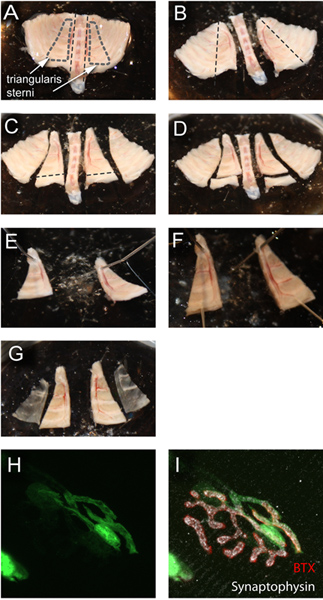 The SC bleaching method presented here is simple, fast and versatile: (i) It enables revealing single SC morphology and dynamics by confocal microscopy based on a single transgene - which is a significant advantage when combining the approach e.g. with disease models that require additional alleles. (ii) The method is rapid, as from dissection to fixation it can be performed in half a day. (iii) The number of applications is broad, as it can be combined with other methods, such as cell ablations, imaging organelles, electrophysiology or immunohistochemistry. Additionally, the approach presented here for SCs at murine NMJs can be generalized to other cells, tissues or species - one example of an application of a related technique in zebrafish is presented in reference 6. Also other fluorescent proteins besides GFP can be used for bleaching and time lapse microscopy, for example YFP or CFP. While we have not used these fluorescent proteins in SCs, bleaching of axons shows that a less stable fluorescent protein (e.g. CFP) in this setting can be advantageous. However, a compromise between efficient bleaching and stable imaging has to be found, depending on the desired results (e.g. single image vs. time-lapse of the remaining un-bleached cells).

There are a number of limitations to the technique, however. One relates to the use of an explanted (and hence axotomized) muscle, which limits the imaging period. In previous studies we have found that - depending on the question under study - the triangularis sterni explant can be used for a maximum of 3-6 hr. Still, sequential photo-bleaching can be used in vivo, overcoming this limitation provided the sample can be sufficiently stabilized to obtain images that can be subtracted. Two further aspects need to be kept in mind, when analysing data resulting from the sequential bleaching approach: (i) Phototoxicity could alter SC dynamism, as killing a terminal SC results in rapid expansion of its neighbours11. So plausibility checks should be included, e.g. measuring the sum of expansions and retractions in a stable synapse. On average, the population of imaged SCs should not significantly grow or shrink. (ii) The morphology of all but the last SC is obtained by image subtraction. The quality of such an image depends on the obtained bleaching contrast. This is generally achieved easier in brighter mouse lines. For example, Plp-GFP works better than S100-GFP12. Image subtraction adds noise, so the last SCs is generally revealed in more detail than the others (especially also, as post-hoc imaging after fixation allows using high numerical aperture oil objectives). Hence, a morphological feature should only be accepted as real, if it is visible in "last" SCs, as well as in bleached ones.

We would like to thank Manuela Budak, Ljiljana Marinkovi and Kristina Wullimann for excellent technical assistance. We thank W. Macklin for providing Plp-GFP mice. T.M. is supported by the Institute of Advanced Studies (Technische Universität München), by the Deutsche Forschungsgemeinschaft (DFG; Sonderforschungsbereich SFB 596), by the Alexander-von-Humboldt-Foundation and by the national funding agency ("Bundesministerium für Bildung und Forschung") in the frame of ERA-Net NEURON "iPSoALS" and "2-photon imaging". T.M. and M.B. are supported by the Center for Integrated Protein Science (Munich). P.M. was supported by the Graduate School of Technische Universität München (TUM-GS).