We describe a robust method for chromatin immunoprecipitation using primary T cells. The method is founded on standard approaches, but uses a specific set of conditions and reagents that improve efficiency for limited a quantities of cells. Importantly, a detailed description of the data analysis phase is presented.

Chromatin immunoprecipitation (ChIP) is a widely-used method for determining the interactions of different proteins with DNA in chromatin of living cells. Examples include sequence-specific DNA binding transcription factors, histones and their different modification states, enzymes such as RNA polymerases and ancillary factors, and DNA repair components. Despite its ubiquity, there is a lack of up-to-date, detailed methodologies for both bench preparation of material and for accurate analysis allowing quantitative metrics of interaction. Due to this lack of information, and also because, like any immunoprecipitation, conditions must be re-optimized for new sets of experimental conditions, the ChIP assay is susceptible to inaccurate or poorly quantitative results.

Our protocol is ultimately derived from seminal work on transcription factor:DNA interactions1,2 , but incorporates a number of improvements to sensitivity and reproducibility for difficult-to-obtain cell types. The protocol has been used successfully3,4 , both using qPCR to quantify DNA enrichment, or using a semi-quantitative variant of the below protocol.

This quantitative analysis of PCR-amplified material is performed computationally, and represents a limiting factor in the assay. Important controls and other considerations include the use of an isotype-matched antibody, as well as evaluation of a control region of genomic DNA, such as an intergenic region predicted not to be bound by the protein under study (or anticipated not to show changes under the experimental conditions). In addition, a standard curve of input material for every ChIP sample is used to derive absolute levels of enrichment in the experimental material. Use of standard curves helps to take into account differences between primer sets, regardless of how carefully they are designed, and also efficiency differences throughout the range of template concentrations for a single primer set. Our protocol is different from others that are available5-8 in that we extensively cover the later, analysis phase.

3. Chromatin Immunoprecipitation (All Steps Must be Carried Out at 0-4 °C)

4. Preparation of the PCR Reaction (All Steps Must be Carried Out on Ice)

The Chromatin Immunoprecipitation (ChIP) protocol presented here controls for differences, if any, in the amount of DNA used in PCR through use of a primer pair that amplifies an unbound region of genome, thus serving as a "loading control". In the example shown in Figure 3, we have used the coding region of the mouse Actb gene as a region unbound to our protein of interest and the transcription factor NFAT binding site on mouse Il2 promoter as target region. Alternatively, a region several kilobases upstream or downstream of the targeted region known to have no binding of the protein of interest can be chosen for this purpose. When designing a primer pair for the targeted region, the ideal size of PCR product is approximately 100-200 bp. It is also important to computationally verify that these primers do not bind anywhere else in the genome.

Relative enrichment of a protein bound to different regions of the genome can be compared if the same set of isotype control and specific antibodies are chosen. Enrichment of various proteins on the same target region will depend on the specificity and affinity of the antibody used as well as the amount of the specific protein bound to DNA. For example, relative enrichment in the case of ChIPs performed for histones will typically return a higher enrichment value when compared to a transcription factor that may bind to DNA in response to various cellular signals. If the specificity of the antibody is good, we typically observe a 2-10 fold enrichment over the unbound control region (Figures 3 and 4). 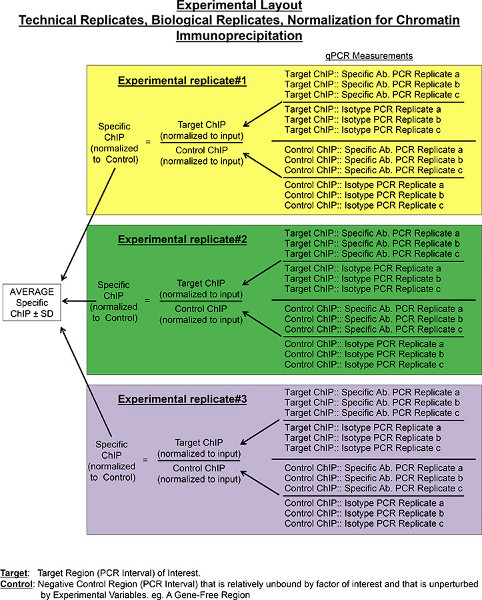 Figure 1. Experimental layout describing calculations to obtain relative enrichment of ChIP for specific antibody at the target site. Quantitative PCR is used to obtain DNA amounts in ChIP samples immunoprecipitated using a specific antibody and its isotype control. Quantitative PCR is performed using primers spanning target sequence and unbound control region of genome. For each ChIP sample, PCR is performed in triplicate, indicated as technical replicates a, b and c, and relative enrichment is calculated for each replicate as explained in the protocol. Calculations for average technical output values are performed. Variance can also be analyzed at this step, and ideally should be low. The technical error calculations however are not included in the final formula for calculation of error between biological replicates. Rather, the measured biological variation itself also inherently contains the technical variation. Three experimental replicates (in boxes colored yellow, green and purple) are used per ChIP experiment to obtain an average ChIP signal and its standard deviation (SD). Click here to view larger figure. 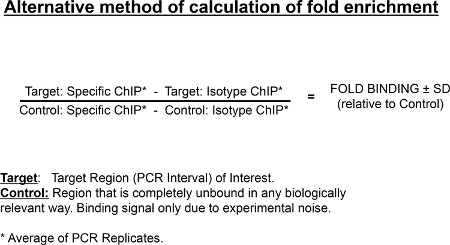 Figure 2. Alternative method of calculation of ChIP enrichment. In cases where the amount of DNA immunoprecipitated from the isotype antibody is extremely low and qPCR amplication is poor, this amount of DNA can be subtracted from the amount of DNA immunoprecipitated using a specific antibody to obtain the fold enrichment for every technical replicate. This method of calculation must be used in all three experimental replicates to obtain an average ChIP signal and its standard deviation (SD), as described in Figure 1. 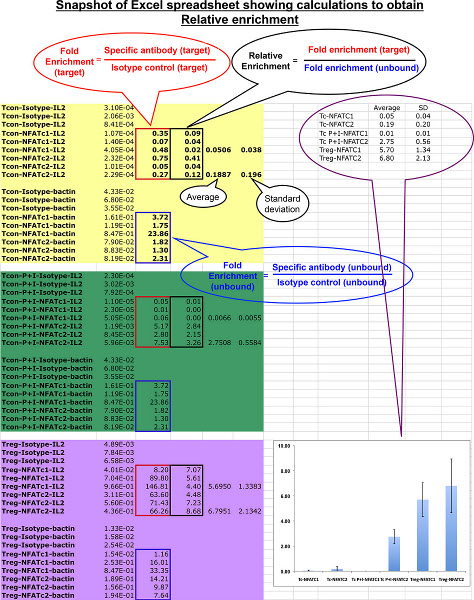 Figure 3. Snapshot of Microsoft Excel spreadsheet showing calculations to obtain relative enrichment. Data from three experimental repeats (in boxes colored yellow, green and purple) with three technical replicates each was used to calculate fold enrichment. Use of the calculation protocol described in Figure 1 is depicted in this spreadsheet. Click here to view larger figure. 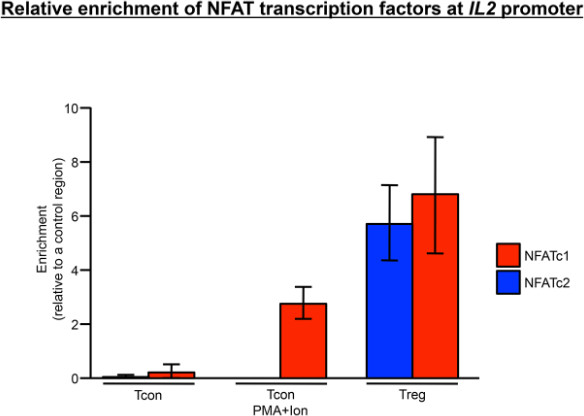 Figure 4. Relative enrichment of NFAT transcription factor at the IL2 promoter. Conventional CD4 T cells (Tcon) and regulatory CD4 T cells (Tregs) were isolated from Foxp3EGFP mice. A small fraction of Tcon cells was stimulated with PMA and Ionomycin for 30 min. ChIP was performed as explained in the experimental protocol. Data presented here is from three experimental repeats with three technical replicates each. Relative enrichment of transcription factors NFATc1 and NFATc2 on the mouse IL2 promoter in these cell types is depicted as fold enrichment over an unbound region3.

The protocol above provides a robust method of accurately quantifying DNA enrichment from primary lymphocytes using ChIP. One major reason for robustness in this protocol is the inclusion of biological replicates. The above protocol uses three replicates, the enrichment for which is calculated independently. The outputs are then averaged to provide a degree of enrichment and standard deviations calculated to provide a measure of variability. For each sample, three technical replicates are also performed to eliminate variation in sample handling, PCR amplification, etc. The amount of variation in the technical repeats is typically much less than that observed between different biological samples. A second reason for robustness is the inclusion of multiple technical controls, including isotype-matched control antibodies, the use of a standard input DNA curve, and the use of a control amplicon corresponding to a non-specific genomic region.

Limitations of the above method are similar to those encountered generally using ChIP. The method suffers from somewhat poor spatial resolution, the limiting factor being the shearing of DNA fragments by sonication. Therefore, the resolving power of the method is only approximately 500 bp of DNA. Experiments that require higher resolution can make use of micrococcal nuclease digestion8 , or exonuclease digestion of recovered fragments (ChIP-exo)9,10 . In addition, ChIP preparations described above coupled to high-throughput sequencing of recovered fragments (ChIPseq, ChIP-seq or ChIP-SEQ)11,12 in place of qPCR, produces a sampling of differently sheared enriched fragments, the intersection of which may be taken as a bona fide site of interaction. Nevertheless, the method presented here provides a robust way of carefully and accurately quantifying DNA association with transcription factors, nucleosome components, modified histones and other proteins at specific sites of interest.

This work was supported by NIH grants CA141009 and GM39067. We thank E. Parnell and R. Yarrington for comments on the written portion.