This is a sample clip. Sign in or start your free trial.
JoVE Journal
Engineering

Battery safety has been a very important research area over the past decade. Commercially available lithium ion batteries employ low flash point (<80 °C), flammable, and volatile organic electrolytes. These organic based electrolyte systems are viable at ambient temperatures, but require a cooling system to ensure that temperatures do not exceed 80 °C. These cooling systems tend to increase battery costs and can malfunction which can lead to battery malfunction and explosions, thus endangering human life. Increases in petroleum prices lead to a huge demand for safe, electric hybrid vehicles that are more economically viable to operate as oil prices continue to rise. Existing organic based electrolytes used in lithium ion batteries are not applicable to high temperature automotive applications. A safer alternative to organic electrolytes is solid polymer electrolytes. This work will highlight the synthesis for a graft copolymer electrolyte (GCE) poly(oxyethylene) methacrylate (POEM) to a block with a lower glass transition temperature (Tg) poly(oxyethylene) acrylate (POEA). The conduction mechanism has been discussed and it has been demonstrated the relationship between polymer segmental motion and ionic conductivity indeed has a Vogel-Tammann-Fulcher (VTF) dependence. Batteries containing commercially available LP30 organic (LiPF6 in ethylene carbonate (EC):dimethyl carbonate (DMC) at a 1:1 ratio) and GCE were cycled at ambient temperature. It was found that at ambient temperature, the batteries containing GCE showed a greater overpotential when compared to LP30 electrolyte. However at temperatures greater than 60 °C, the GCE cell exhibited much lower overpotential due to fast polymer electrolyte conductivity and nearly the full theoretical specific capacity of 170 mAh/g was accessed.

Lithium (Li) is a highly electropositive metal (-3.04 V relative to standard hydrogen electrode), and the lightest metal (equivalent weight of 6.94 g/mol and specific gravity of 0.53 g/cm3). This makes it attractive as a choice for the active material in the negative electrode and ideal for portable energy storage devices where size and weight matter. Figure 1 shows that lithium-based batteries (Li ion, PLiON, and Li metal) have higher energy densities than lead-acid, nickel-cadmium, and nickel-metal-hydride batteries 1.

A full lithium-ion battery consists of a cathode (positive), an anode (negative), an electrolyte, and a separator (Figure 2). Both the cathode and the anode are intercalation compounds, where Li-ions can intercalate or de-intercalate reversibly (if the anode is carbon, Li intercalates as neutral Li). The electrolyte provides ionic conduction and insulates electronic conduction between the electrodes. The separator is permeable to ions, but mechanically rigid to keep the two electrodes from shorting. When the cell is in a fully charged state all of the Li has intercalated in the anode, and when the cell is in a fully discharged state all of the Li-ions are intercalated in the cathode. During the spontaneous reaction, discharging electrons flow from the anode to the cathode through an external circuit to power a device, while the ions flow from the anode to the cathode through the electrolyte. The ions and electrons recombine at the cathode to maintain charge neutrality. Upon charging, the flow is reversed.

The electrolyte used in Li-ion batteries generally consists of a salt of the type LiX and a non-aqueous solvent. Compared to the aqueous electrolytes used in other electrochemical systems, the disadvantages of Li-ion electrolytes are lower conductivity, higher cost, flammability, and environmental problems. Advantages include a wide temperature range (over which the electrolyte remains a liquid) from -150 °C to 300 °C, a wide voltage window (up to 5 V versus Li/Li+), and better compatibility with electrodes (aqueous electrolyte would react violently with Li metal and form LiOH and hydrogen) 2, 3, 4-6.

The main non-aqueous electrolytes used in batteries include organic carbonate-based liquids, polymers, ionic liquids, and ceramics. These electrolytes need to meet certain benchmarks to be used in practical Li-ion batteries. They include a conductivity of at least 10 mS/cm, a large electrochemical window (>4.5 V for high voltage cathodes), low vapor pressure, good thermal and chemical stability, low toxicity, and low cost. For certain stringent applications such as the electric vehicles, all of these benchmarks must be met over a wide temperature range, typically from -20 °C to 60 °C. Since the focus of this work is on organic and polymer electrolytes, the remainder of this paper will focus on these electrolytes.

Carbonate based electrolytes consist of a lithium salt dissolved in an organic solvent. However, it is difficult for any one solvent to meet all of the requirements. For example, solvents with low vapor pressure, such as ethylene carbonate (EC) and propylene carbonate (PC), tend to have higher viscosities, leading to lower conductivity. Also EC is a solid at room temperature; this requires it to be combined with another solvent. Generally the electrolyte is a combination of several solvents. The common solvents and some of their physical properties are listed in Table 1.

This paper will discuss (a) the solvent free dry polymer synthesis, (b) the polymer conduction mechanism, and (c) provide temperature cycling for both solid polymer and organic electrolytes. 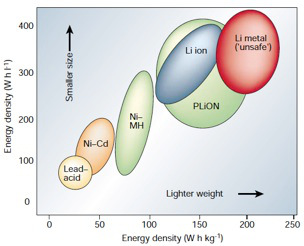 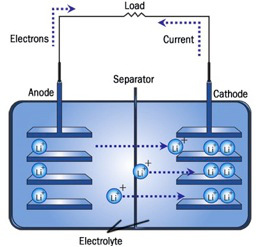 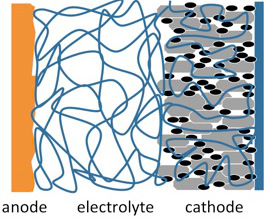 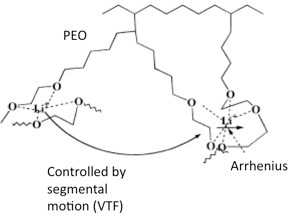 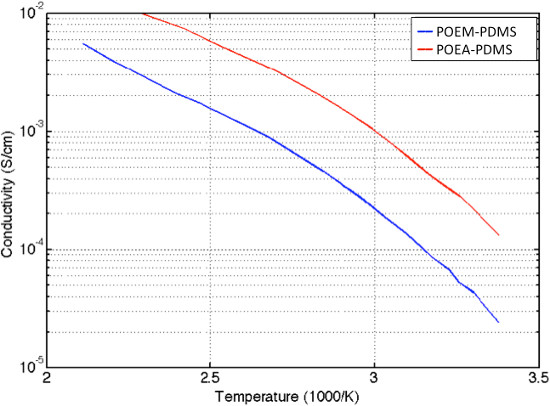 Figure 7. Conductivity of POEM and POEA at different temperatures. 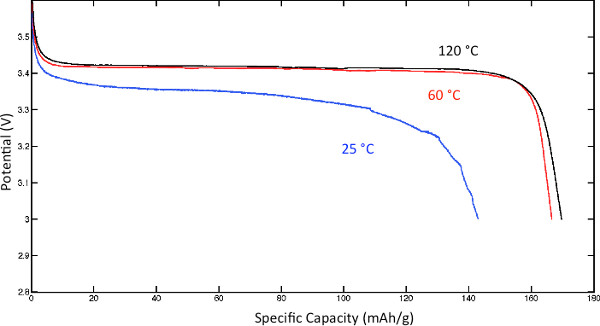 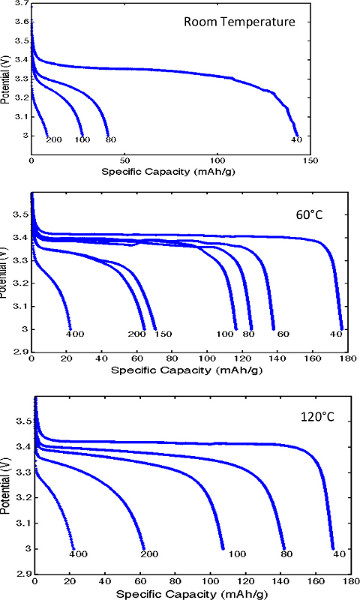 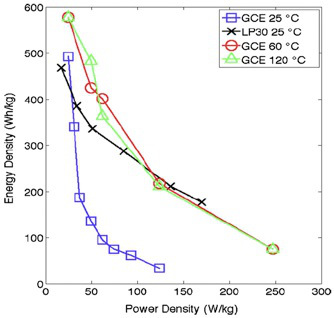 The LiFePO4/GCE/Li curves show greater overpotential than the LiFePO4/LP30/Li curves on both charge and discharge. Since the GCE is used as both electrolyte and binder, ion conduction is provided to all of the cathode particles, and nearly the entire practical specific capacity (150 mAh/g) was accessible. The theoretical specific capacity of 170 mAh/g is not achieved since it is limited by lithium diffusion within LiFePO4 particles, which is low at room temperatures. The cycling capacities for the first 50 deep cycles are shown in the right plot. The energy efficiencies during the first 5 cycles are low (large charge/discharge capacity ratio), possibly due to the reversible capacity loss related to the formation of a passivation layer on lithium anode. The passivation film could result from reactions between lithium metal and residual THF solvent of the CF3SO3- anions, which are known to produce LiF species.

At both 60 °C and 120 °C, the cell exhibits low overpotential due to fast polymer electrolyte conductivity, and nearly the full theoretical specific capacity can be accessed. Full rate capability test of the solid polymer cells were also performed at these three temperatures. At each temperature, the cells were charged at a constant current of 0.05 C (or 25 W/kg considering the cathode loading mass density) and discharged at higher currents. Fresh cells were used for each discharge current to isolate the effect of capacity fade. The rate capability test of a cell with commercial liquid electrolyte (LP30) was also performed at room temperature. The energy densities (integrating the discharge voltage with respect to specific capacity) at different power densities (multiplying the constant current with discharge voltage) are shown in the Ragone plot in Figure 11 for the different temperatures. Figure 11 reflects the tradeoff between energy density and power density. At large currents, the cell performance becomes diffusion limited and the cell capacity decreases. For the LP30-based cells, only room-temperature data were collected. In the case of the GCE-based cells, performance near 60 °C is of particular interest since this temperature is in the range of the melting point of PEO. As indicated in Figure 11 at room temperature the energy densities of the GCE and LP30-based cells are comparable at low power densities. As the power density is increased from 25 to 50 W/kg, the energy density of the GCE-based cells falls drastically. However, at elevated temperatures (>60 °C),the decrease in energy density of the GCE-based cells with increasing power density is significantly smaller due to the higher mobility of PEO chains. Above 60 °C, the performance of the GCE-based cell becomes less dependent on temperature and comparable to the room-temperature performance of the liquid electrolyte-based cells.

The authors would like to thank Weatherford International for providing financial support.