Measurement of autonomic nervous system activity usually confines the researcher and participant to the laboratory, which may provide an intimidating environment to children. The VU University Ambulatory Monitoring System (VU-AMS) device can record cardiac autonomic control in any setting. The VU-AMS proved very amenable to testing in children.

ANS activity can be measured invasively, for instance by radiotracer techniques or microelectrode recording from superficial nerves, or it can be measured non-invasively by using changes in an organ's response as a proxy for changes in ANS activity, for instance of the sweat glands or the heart. Invasive measurements have the highest validity but are very poorly feasible in large scale samples where non-invasive measures are the preferred approach. Autonomic effects on the heart can be reliably quantified by the recording of the electrocardiogram (ECG) in combination with the impedance cardiogram (ICG), which reflects the changes in thorax impedance in response to respiration and the ejection of blood from the ventricle into the aorta. From the respiration and ECG signals, respiratory sinus arrhythmia can be extracted as a measure of cardiac parasympathetic control. From the ECG and the left ventricular ejection signals, the preejection period can be extracted as a measure of cardiac sympathetic control. ECG and ICG recording is mostly done in laboratory settings. However, having the subjects report to a laboratory greatly reduces ecological validity, is not always doable in large scale epidemiological studies, and can be intimidating for young children. An ambulatory device for ECG and ICG simultaneously resolves these three problems.

In the Amsterdam Born Children and their Development study, a Dutch prospective, longitudinal birth cohort, the measurement protocol was started in 3,097 children 6. Approval was obtained from the Academic Medical Center Medical Ethical Committee, the VU University Medical Center Medical Ethical Committee and the Registration Committee of Amsterdam. All participating mothers gave written informed consent for themselves and their children.

As the monitors are lightweight and unobtrusive, the children tolerated these measurements very well. We do not have data on the refusal rate, but experience taught us that only a few children resisted the placement of the electrodes and thereby obstructed further assessment. Of the 3,097 registrations, 0.7% were lost due to either equipment failure or misplacement of files. Out of the 3,074 registrations left, 98.7% were of children who completed the entire protocol (n = 3,056). Within each of the labelled time periods (we originally labelled four time periods, but later summarized these to two), we encountered unclear ICG signals, meaning PEP could not be determined. This led to a loss of 1.5% in the first out of four labelled periods, 2.4% in the second, 2.8% in the third and 4.1% in the fourth period. Complete data on PEP in all time periods was available in 2,797 cases (91.5%, thus 8.5% loss due to unclear ICG signals). Complete data on heart rate (HR), pre-ejection period (PEP) and respiratory sinus arrhythmia (RSA), as well as sex and age, was available from 2,761 children; in this final step, 1.3% data loss occurred, due to unknown reasons. Overall, 89.2% of the started registrations led to full subject data. The mean age of the children was 5.7 years (SD 0.5; interquartile range 5.0:6.5), and their BMI was 15.5 kg/m2 (SD 1.5; interquartile range 13.9:17.2).

The mean values of the major outcome variables HR, PEP, and RSA are given in Table 1 and graphically depicted in Figure 3, separately for boys and girls. HR (both lying down and sitting up) and PEP (only sitting up) were higher in girls than in boys (both postures). RSA was lower in girls than in boys (both postures). The higher values for HR in girls are likely to be caused by the lower vagal (parasympathetic) cardiac control. Their sympathetic cardiac control was not different or even lower than that in boys (sitting up). 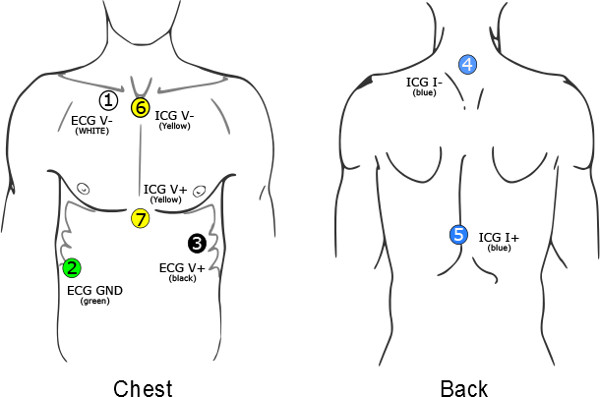 Figure 2. The typical settings used for a recording as displayed by the DAMS software after connecting to the VU-AMS5fs device. Click here to view larger figure. 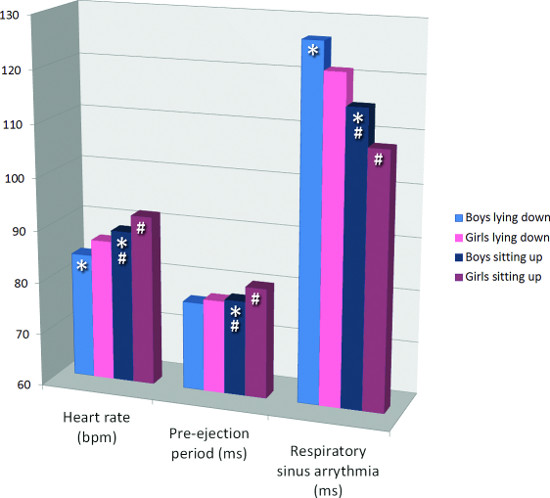 We used an ambulatory recording device to measure cardiac autonomic control in 3097 children, aged between 5 and 7 years. Seven electrodes sufficed to measure the ECG and ICG from which the heart rate, heart rate variability and the systolic time intervals were extracted. Heart rate variability in the respiratory frequency band (RSA) is a valid indicator of cardiac parasympathetic activity. The systolic time interval, PEP, by reflecting cardiac contractility, is a valid indicator of cardiac sympathetic activity. The mean values obtained for HR, PEP and RSA, the effects of posture changes and the differences between boys and girls were in line with what would be expected from the literature.

As ambulatory monitoring removed the necessity of assessment in a laboratory our recordings could be done in various locations (e.g. school, sports center, science museum) without differences in signal recording quality. However, it is of crucial importance to standardize within or between subject comparisons for posture and physical load, as afterload and preload effects can co-determine the PEP without any changes in cardiac sympathetic drive 7. We conclude that ambulatory recording of the ECG and ICG in large samples of children is highly feasible and propose the current standardized study design as a useful template for future assessments of cardiac autonomic control in children.

AEvD was supported by the Dutch Heart Foundation (DHF-2007B103). The authors would like to thank all mothers and children in the Amsterdam Born Children and their Development (ABCD) study, and the entire development and maintenance team of the VU-AMS system at the Division for Instrumentation - the Department of Psychophysiology (VU University, Amsterdam, the Netherlands).