Isolation and culture of myofibers is the gold standard in vitro system to study the transition of satellite cells through quiescence, activation and differentiation. Importantly, the single myofiber culture system preserves the myofiber/stem cell association, which is an essential component of the muscle stem cell niche.

Muscle regeneration in the adult is performed by resident stem cells called satellite cells. Satellite cells are defined by their position between the basal lamina and the sarcolemma of each myofiber. Current knowledge of their behavior heavily relies on the use of the single myofiber isolation protocol. In 1985, Bischoff described a protocol to isolate single live fibers from the Flexor Digitorum Brevis (FDB) of adult rats with the goal to create an in vitro system in which the physical association between the myofiber and its stem cells is preserved 1. In 1995, Rosenblattmodified the Bischoff protocol such that myofibers are singly picked and handled separately after collagenase digestion instead of being isolated by gravity sedimentation 2, 3. The Rosenblatt or Bischoff protocol has since been adapted to different muscles, age or conditions 3-6. The single myofiber isolation technique is an indispensable tool due its unique advantages. First, in the single myofiber protocol, satellite cells are maintained beneath the basal lamina. This is a unique feature of the protocol as other techniques such as Fluorescence Activated Cell Sorting require chemical and mechanical tissue dissociation 7. Although the myofiber culture system cannot substitute for in vivo studies, it does offer an excellent platform to address relevant biological properties of muscle stem cells. Single myofibers can be cultured in standard plating conditions or in floating conditions. Satellite cells on floating myofibers are subjected to virtually no other influence than the myofiber environment. Substrate stiffness and coating have been shown to influence satellite cells' ability to regenerate muscles 8, 9 so being able to control each of these factors independently allows discrimination between niche-dependent and -independent responses. Different concentrations of serum have also been shown to have an effect on the transition from quiescence to activation. To preserve the quiescence state of its associated satellite cells, fibers should be kept in low serum medium 1-3. This is particularly useful when studying genes involved in the quiescence state. In serum rich medium, satellite cells quickly activate, proliferate, migrate and differentiate, thus mimicking the in vivo regenerative process 1-3. The system can be used to perform a variety of assays such as the testing of chemical inhibitors; ectopic expression of genes by virus delivery; oligonucleotide based gene knock-down or live imaging. This video article describes the protocol currently used in our laboratory to isolate single myofibers from the Extensor Digitorum Longus (EDL) muscle of adult mice (6-8 weeks old).

All experiments were handled according to the University of Ottawa regulations for animal care and handling.

See Table 1 for an overview of the protocol.

1. Before Starting the Isolation

Here we described the isolation of single myofibers from the EDL muscle of adult mice. Successful myofibers yield depend on several factors, such as collagenase activity or muscle conditions or age. Most importantly, the isolation of the muscle from tendon to tendon results in long, intact myofibers from EDL muscle. Figure 1 shows a step by step graphical representation of the "tendon to tendon" isolation. Once the muscle is fully digested, myofibers are released by applying gentle pressure to the muscle. Figure 2A shows a representative picture of a myofiber isolation experiment after the first wash. At this point the culture contains a mixture of bundles of single myofibers which appear as long and shining tubular structures, hyper contracted myofibers which are dark and short and debris from the digestion process. By the end of at least three consecutive washes, only single live myofibers should remain in the dish for culture or downstream analysis (Figure 2B). Figure 2C shows a long, live fiber as compared to a hyper contracted fiber (C'). At the time of the isolation, satellite cells appear as tiny protuberances on the myofiber surface (Figure 3A). If maintained in serum rich medium, satellite cells activate, proliferate, migrate and eventually fuse into myotubes (B). After 15 days in culture, all myotubes express the Myf5 reporter YFP (C) suggesting that muscle regeneration in the adult is performed by cells that at some point during their development had expressed the myogenic determinant factor Myf5. All satellite cells express the paired box transcription factor Pax7 17. The reporter mouse line Pax7Cre-TdTomato can be used to trace satellite cells via the expression of the TdTomato fluorescent signal (Figures 3D and E). Figure 4 shows a representative immunofluorescence of double Pax7+/Myod satellite cells. Classically double Pax7+/Myod+ satellite cells are considered proliferative committed muscle progenitors which will either complete the differentiation program by down regulating Pax7 while maintaining Myod expression or return to quiescence by down regulating Myod and maintaining Pax7 expression 18

Figure 1. EDL muscle isolation from mouse hindlimb. A . Hindlimb of an 8 week old adult mouse. Arrows indicates the distal (knee) tendon and the proximal (foot) tendon. B. Anatomical position of the Tibialis Anterior (TA) muscle and the Extensor Digitorum Longus (EDL) muscle. C. By holding the EDL through the proximal tendon, the muscle is pulled toward the knee to expose the distal tendon. D. The distal tendon is cut and the EDL is released. 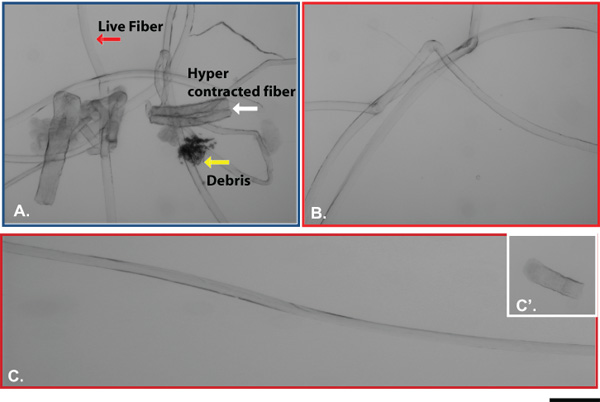 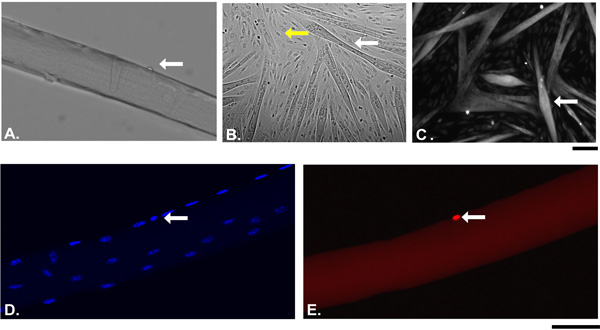 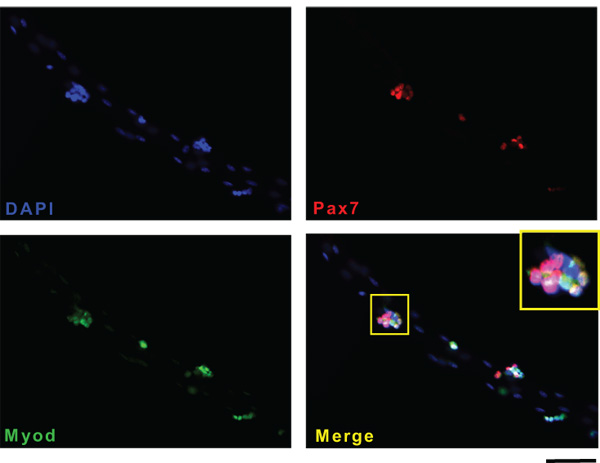 The isolation and culture of single myofibers from intact muscles provides an excellent in vitro model to study the process of muscle regeneration. A unique feature of this system is the preservation of satellite cells in their physiological environment beneath the basal lamina. Most importantly, the technique can be used to investigate muscle stem cell behavior in both quiescence and activated states. Over the past 20 years, the myofiber culture system has provided meaningful insights into the biology of the satellite cell population with respect to both intrinsic and extrinsic determinants. By culturing individual myofibers, satellite cell heterogeneity with respect to myofiber, muscle type or regenerative potential has been addressed 15. Elaborate studies using live imaging of single cultured fibers allowed for the gaining information on satellite cell migration pattern 16. The acquisition of quantitative data is also possible. Although time consuming, it provides significant information on the distribution and occurrence of specific events (stem cells asymmetric division, proliferation and differentiation ratio, etc.). Together with previously described applications, protein or RNA extraction from single fibers is also possible, although isolation of pure population of satellite cells by FACS or other means may provide a better platform to investigate protein or gene expression changes at a molecular level. In our experience, the most critical step for successful fiber isolation is the "tendon to tendon" isolation (steps 2.5 to 2.9 in the protocol text). This guarantees that after muscle digestion, fibers are released from the EDL with minimal or no damage thus increasing their performance in the following steps.

We would like to thank Sarah Dick for providing critical reading and comments. M.A.R. holds the Canada Research Chair in Molecular Genetics and is an International Research Scholar of the Howard Hughes Medical Institute. This work was supported by grants to MAR from the National Institutes of Health, the Howard Hughes Medical Institute, the Canadian Institutes of Health Research, the Muscular Dystrophy Association and the Canada Research Chair Program.