We demonstrate a novel arterial ligation model in murine spinotrapezius muscle, including a step-by-step procedure and description of required instrumentation. We describe the surgery and relevant outcome measurements relating to vascular network remodeling and functional vasodilation using intravital and confocal microscopy.

The murine spinotrapezius is a thin, superficial skeletal support muscle that extends from T3 to L4, and is easily accessible via dorsal skin incision. Its unique anatomy makes the spinotrapezius useful for investigation of ischemic injury and subsequent microvascular remodeling. Here, we demonstrate an arteriolar ligation model in the murine spinotrapezius muscle that was developed by our research team and previously published1-3. For certain vulnerable mouse strains, such as the Balb/c mouse, this ligation surgery reliably creates skeletal muscle ischemia and serves as a platform for investigating therapies that stimulate revascularization. Methods of assessment are also demonstrated, including the use of intravital and confocal microscopy. The spinotrapezius is well suited to such imaging studies due to its accessibility (superficial dorsal anatomy) and relative thinness (60-200 μm). The spinotrapezius muscle can be mounted en face, facilitating imaging of whole-muscle microvascular networks without histological sectioning. We describe the use of intravital microscopy to acquire metrics following a functional vasodilation procedure; specifically, the increase in arterilar diameter as a result of muscle contraction. We also demonstrate the procedures for harvesting and fixing the tissues, a necessary precursor to immunostaining studies and the use of confocal microscopy.

Animal models of chronic ischemia are valuable tools for investigating the pathophysiology of ischemic diseases, such as peripheral artery disease, coronary artery disease, and cerebrovascular disease. In rodents, as in humans, arterial occlusion leads to structural remodeling of the vascular network, including arteriogenesis and angiogenesis. In healthy and younger patients, this remodeling can be sufficient to rescue tissue from ischemia-induced injury, but co-morbidities such as diabetes can severely compromise remodeling and recovery. Understanding the mechanisms underlying vascular remodeling events is essential for developing therapies that stimulate these endogenous revascularization processes.

Currently, femoral artery ligation or resection in the hindlimb is the standard technique for studying chronic ischemia-induced vascular remodeling in small animals4,5. Analysis of the diameter, connectivity, and reactivity of the microvessels that make up the vascular network downstream of the ligated femoral artery is difficult, however, due to the thickness of the muscles. We have developed an arteriolar ligation model in the mouse spinotrapezius muscle: unilateral ligation of the lateral feed artery in this stabilizing dorsal muscle1. The relatively thin spinotrapezius (60-200 μm) is amenable to en face immunostaining for the assessment of whole network topology with single-cell resolution, allowing a detailed examination of vascular remodeling events across the entire tissue. The spinotrapezius is also superficial and accessible, and thus its vessels are readily observable by intravital microscopy, for efficient characterization of the impact of remodeling and arteriolar ligation on vascular reactivity.

In this report, we describe in detail and demonstrate the mouse spinotrapezius arteriolar ligation model. Both in vivo and ex vivo methods of assessment following surgery are described, including measurement of functional vasodilation, which has been shown to be impaired under ischemic conditions6, and immunofluorescent imaging of whole-muscle microvascular networks. We also include results of two separate pilot studies to demonstrate the utility of the model. First, we utilized the arterial ligation model to induce a statistically significant increase in vessel tortuosity in C57BL/6 mice (Figure 2B). Tortuosity increases during arteriogenesis in arteriole collaterals. In other mouse strains, that are more vulnerable to ischemia due to the absence of collateral arterioles (e.g. Balb/c), capillary arterialization is observed10. Capillary arterialization is detected by increased diameters and the development of α-smooth muscle actin reactivity. Second, functional electrical stimulation of the muscle leads to vasodilation in terminal arterioles of the spinotrapezius (Figure 3B).

*Dose variable upon mouse strain and stock, adjust accordingly so mouse recovery is within an hour from induction. 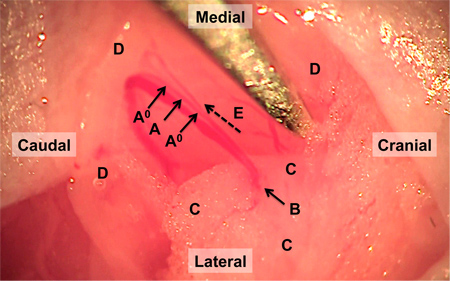 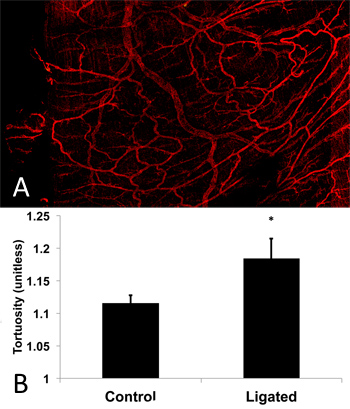 Figure 2. Confocal image of spinotrapezius muscle microvascular network for pilot study of tortuosity. (A) Harvested and whole-mounted muscle was immunostained for smooth muscle alpha-actin and imaged using confocal microscopy. The field of view shows the region of muscle located directly downstream of the ligated arteriole 1 week post ligation. Tortuous vessels are evident in the muscle as a result of the ligation. (B) Pilot study results show significantly increased (p=0.035; 1 tailed Student's t-test) tortuosity exhibited by microvessels in the ligated muscle as measured by vessel path length to cord distance ratio for a trial of C57BL/6 mice (n=8) compared to contralateral control. 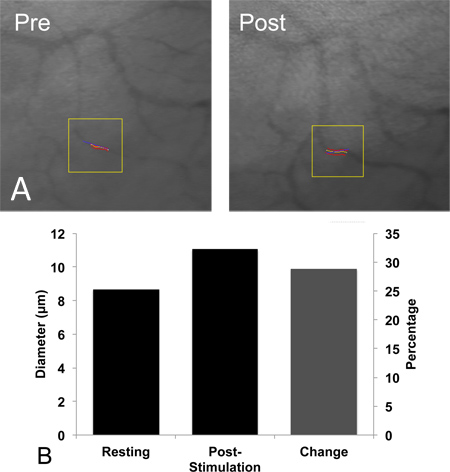 The murine spinotrapezius ligation model presented here is an effective small animal model to study the functional and structural adaptations that result from an arterial occlusion. This model is complementary to the widely-used hindlimb ischemia model4, in that it provides a whole-muscle view of intact microvascular networks with high spatial resolution. Moreover, because this muscle is located just beneath the dorsal skin, it is accessible to serial imaging with intravital microscopy, and to local drug delivery via superfusion or thin film implantation2. These features make it an appealing small animal model in which to study the effects of novel therapeutic targets on vascular remodeling and functional vasodilation following arterial occlusion.

Second, the size of the artery that is ligated in the spinotrapezius model is substantially smaller than the femoral artery, and therefore, the ligation impacts a smaller tissue volume that is further downstream, i.e. at a lower level of the circulatory tree, in the spinotrapezius compared to the hindlimb3. Hence, the anatomical difference in the location of the ligation in these two models should be considered when comparing the respective physiological responses (e.g. vascular remodeling) to this intervention.

Third, the thinness of the spinotrapezius may permit oxygen to reach the unperfused portion of the tissue from neighboring tissue, compared to the combined ischemia and hypoxia in the hindlimb model as noted above3. Fourth, the recovery of flow to the portion of the spinotrapezius downstream of the ligation is faster than in the hindlimb ligation. The spinotrapezius ligation model is a unique chronic model and should not be confused with other models of transient arterial occlusion or models of ischemia reperfusion injury. We consider it possible to adapt this model to accommodate these types of conditions, but this is outside of the scope of work presented herein. Lastly, we caution against directly relating pre-clinical observations in this model to clinical manifestations of ischemic disease in humans, especially when utilizing young and otherwise healthy mice and due to the inherent physiological limits such as higher heart rate5. Nonetheless, we regard this new model as a valuable tool for uncovering basic mechanisms of tissue responses to ligation and identifying potential therapeutic targets in an in vivo setting.

In addition to the surgical notes provided in the spinotrapezius feed artery ligation procedure (anatomical note (6a), distinguishing the artery from vein (9a), and use of a single ligature (11a)), a few other aspects of the procedure benefit from discussion.

First, the initial incision made over the dorsal fat pad border (or several mm caudal to the shoulder blade, if transdermal visualization is not possible) is ideally made as small as the surgeon is comfortable with, and expanded during the procedure if needed. This practice minimizes the suturing required to close the incision, which is convenient for the surgeon, reduces procedure time, and is also less irritating to the animal during recovery. Alternatively, a larger skin incision may be appropriate according to surgeon preference, since the muscle can be easier to locate with an expanded field. In this case, the incision may benefit from a horse-shoe shape with a medial open face to allow folding towards the spine. While making the skin incision and extending through the secondary skin layers, if a surface vessel is damaged and causes hemorrhaging, apply light pressure with sterile gauze and provide time for hemostasis.

Also of note, it is important to handle the tissue with the minimum required force, and wherever possible hold with forceps closer to the muscle's lateral border and away from the intended ischemic zone. This practice helps to avoid crush injury, which can lead to additional inflammatory-mediated tissue responses that may confound the vascular remodeling response evoked by the arterial ligation.

In conclusion, we have demonstrated the use of the murine spinotrapezius muscle as a surgical model for examining vascular and tissue responses to arteriolar ligation. This model is suitable for intravital assessment of vascular changes (for example, functional vasodilation), and for ex vivo assessment of vascular changes (for example, immunofluorescent imaging and quantitation of vascular networks). Both pre-clinical and clinical studies have demonstrated that an individual's response to arteriolar obstruction (e.g. via ligation in mice or atherosclerotic plaques in humans) is dependent on their age the presence or absence of disease (e.g. diabetes mellitus) the diameter of the obstructed artery, the genetic makeup of the individual, and the metabolic demand of the tissue 11-15. Murine models, such as the one presented here, avail the researcher of strain-specific anatomical and genetic differences and disease-specific phenotypes, which facilitates investigation into these complex relationships.

The authors declare they have no competing financial interests.

We acknowledge Kevin Macleod for use of his creative commons licensed music in the associated video, including (in order of appearance) his tracks "Airport Lounge," "Wallpaper," and "Evening Melodrama." We would also like to acknowledge Ndubisi Okeke and Frederick Torstrick for their assistance with the surgery video.