This is a sample clip. Sign in or start your free trial.
JoVE Journal
Chemistry

Herein, we describe a protocol for simultaneously measuring six proteins in saliva using a fiber-optic microsphere-based antibody array. The immuno-array technology employed combines the advantages of microsphere-based suspension array fabrication with the use of fluorescence microscopy. As described in the video protocol, commercially available 4.5 μm polymer microspheres were encoded into seven different types, differentiated by the concentration of two fluorescent dyes physically trapped inside the microspheres. The encoded microspheres containing surface carboxyl groups were modified with monoclonal capture antibodies through EDC/NHS coupling chemistry. To assemble the protein microarray, the different types of encoded and functionalized microspheres were mixed and randomly deposited in 4.5 μm microwells, which were chemically etched at the proximal end of a fiber-optic bundle. The fiber-optic bundle was used as both a carrier and for imaging the microspheres. Once assembled, the microarray was used to capture proteins in the saliva supernatant collected from the clinic. The detection was based on a sandwich immunoassay using a mixture of biotinylated detection antibodies for different analytes with a streptavidin-conjugated fluorescent probe, R-phycoerythrin. The microarray was imaged by fluorescence microscopy in three different channels, two for microsphere registration and one for the assay signal. The fluorescence micrographs were then decoded and analyzed using a homemade algorithm in MATLAB.

Since the first microarray reported by Mark Schena and coworkers in the mid-1990s, this powerful tool has been utilized in many fields of biological research1. Antibody microarrays capable of simultaneously detecting multiple proteins in diagnostic fluids, such as blood, have important applications in clinical diagnostics and biomarker screening2-10. Saliva, containing many of the same analytes as blood, has been considered as a preferable alternative to blood because saliva collection is safe, noninvasive, and can be carried out by minimally-trained medical personnel11-13. Currently, multiplexed protein analysis using saliva samples is limited by several important factors, including the low concentration of target analyte14 and the wide concentration range of different biomarkers15. 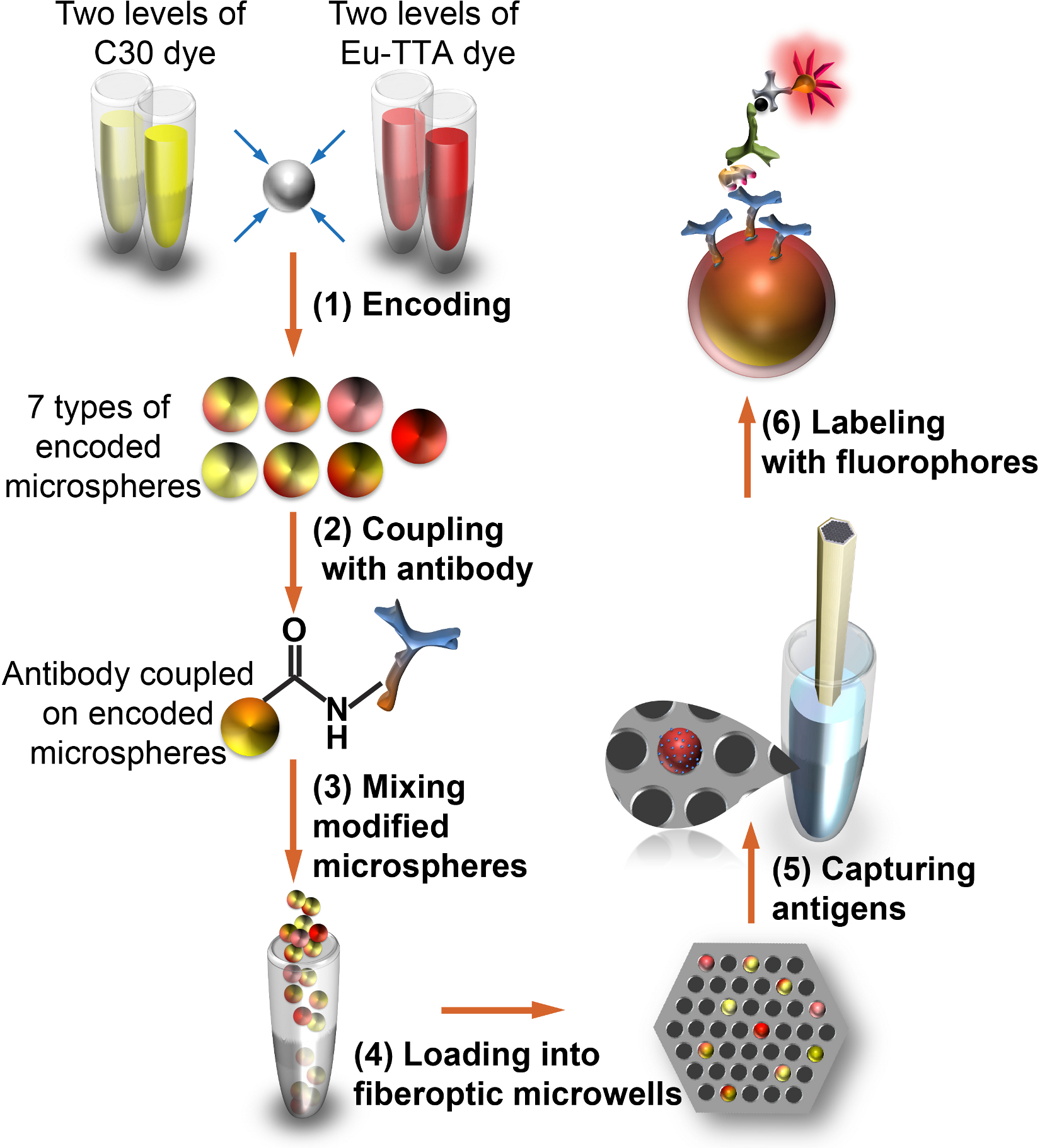 Figure 1. Workflow for applying fiber-optic microsphere antibody array to saliva profiling. (1) Microspheres are internally encoded with two fluorescent dyes; (2) the encoded microspheres are externally modified with protein-specific monoclonal antibodies; (3) the multiplexed microspheres are mixed, and (4) randomly deposited in microwells etched at the proximal end of a fiber-optic bundle; (5) salivary proteins are captured by microspheres through sandwich immunoassay, and (6) quantified using fluorescence microscopy.

Table 2. Parameters for the three fluorescent images of the microarray.

Fluorescence images from three channels showing a small section of the fiber-optic bundle are shown in Figures 2A-C. These images were analyzed using an algorithm written in MATLAB (as described in more detail in the Discussion section). The analysis employs both information from the Eu-TTA encoding image (Figure 2A) and the C30 encoding image (Figure 2B) to decode the microspheres, and the fluorescence intensities of different microspheres in the signal image (Figure 2C) were calculated. With the calibration curves obtained from correlated protein standards, the concentrations of proteins in saliva samples were calculated. 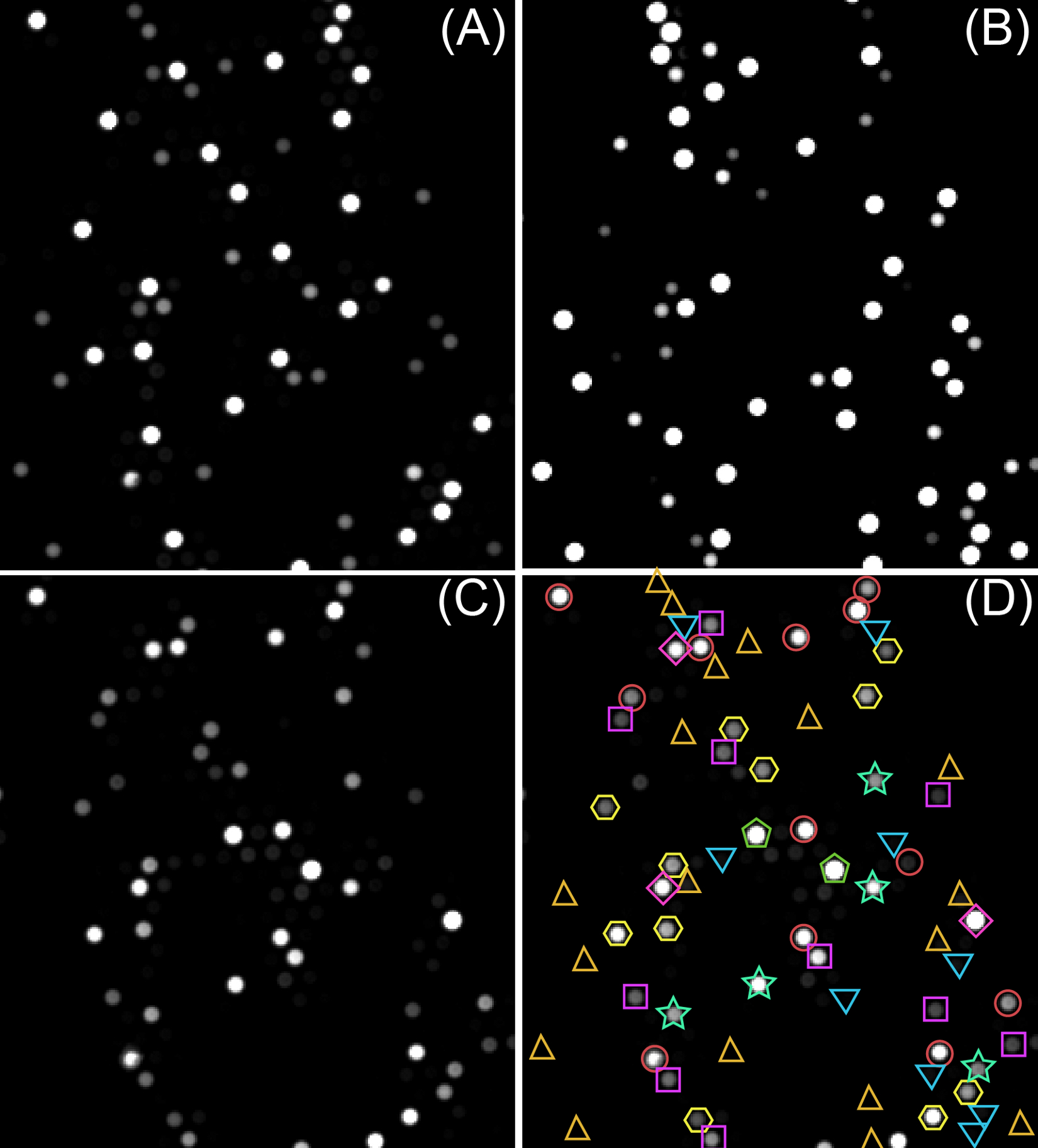 Some of the common troubleshooting procedures are: (1) use only freshly prepared EDC solution and the EDC solution should be added dropwise, (2) autoclaved tubes should be used and the microsphere solution should be transferred into a new tube before each incubation step, (3) during each wash step, try to remove the supernatant as much as possible, (4) the modified microspheres should be stored at 4 °C, avoid freezing and protect from light. Under proper storage conditions, the modified microspheres may be stored for more than 3 months with no detectable signal loss.

The MATLAB algorithm used to analyze the fluorescence images is briefly described below. The relevant code can be found in supplemental materials. Pixels within a user-defined intensity range for the Eu-TTA image are filtered first. Different areas were checked with a size-filter, areas containing a "hollow" center caused by light attenuation were removed and areas where microspheres are present were sorted into a watch list for future processing. All microspheres from the watch list were further filtered with responses in the corresponding C30 image. The signals for all the pixels of a particular microsphere were averaged. The signal strength of this microsphere of interest was calculated by averaging the intensities of all microspheres in the watch list. To make the results statistically more representative, a minimum of 25 microspheres of each type was required. To minimize the nonspecific signal and decrease the variation between different experiments, signals for all microsphere types were normalized by subtracting the signal from the control microspheres.

The signal response of the microspheres can be adjusted by the amount of antibodies immobilized on the surface of microspheres, which is ideal for multiplexed detection of proteins with wide ranges of concentrations. Based on different diameters of the microspheres, the amount of antibody required to form a monolayer on the microspheres can be estimated by the equation from the manufacturer17. For microspheres with a diameter of 4.5 μm, 3 μg of antibody is needed per 1 mg of microspheres. We have tested different antibody amounts in the coupling solution in step 2.8 from 3 μg (0.5x) to 60 μg (10x) of antibody. Increased signals were observed when more antibody was used in the solution. Optimal antibody amounts for different antibodies and applications must be experimentally determined. The "control microspheres" were coupled with the mouse isotype IgG antibody, which is supplied by the manufacturer as the negative control in direct ELISA and has shown no cross-reactivity with up to 40 recombinant human proteins18. To evaluate the reproducibility of the coupling method, two batches of MMP-9 microspheres were coupled on different days. The performance of the microspheres was tested by using multiplexed detection of 10 ng/ml MMP-9. The results showed no significant differences among different batches of microspheres (detailed results are shown in Table 3).

The multiplexed method presented here enables fast, accurate, and reproducible analysis of different proteins over a wide concentration range (results listed in Table 4). The potential cross-reactivity for the six antibody pairs we used in this study was also tested. All signals from cross-reactivity were found to be negligible (less than 3%). Other advantages of this method, when compared to a conventional Enzyme-Linked Immunosorbent Assay (ELISA), include a broad dynamic range, minimal non-specific interactions, reduced sample consumption and low cost10. The required volume of saliva sample is as low as 100 μl and the assay can be completed within 3.5 hr. When compared with other suspension arrays, one limitation of this approach is that once the microarray was assembled, the detection needs to be started in less than 15 min. The method described here has been used in our lab to analyze human saliva samples collected from patients with inflammatory diseases and healthy controls (unpublished data). The method should be applicable for protein analysis of other complex fluid specimens. A similar microsphere-based protein array can be used on other platforms such as microfluidic devices. The encoding and immobilized methods could also be applied to microspheres made with other materials9.

This work was supported by the National Institutes of Health (grant 08UDE017788-05). E.B.P. also acknowledges support from the Spanish Foundation for Science and Technology (FECYT). The authors thank Shonda T. Gaylord and Pratyusha Mogalisetti for critical reading of the manuscript.