A protocol for the seeded synthesis of rod-shaped and tetrapod-shaped multicomponent nanostructures consisting of CdS and CdSe is presented.

We demonstrate a method for the synthesis of multicomponent nanostructures consisting of CdS and CdSe with rod and tetrapod morphologies. A seeded synthesis strategy is used in which spherical seeds of CdSe are prepared first using a hot-injection technique. By controlling the crystal structure of the seed to be either wurtzite or zinc-blende, the subsequent hot-injection growth of CdS off of the seed results in either a rod-shaped or tetrapod-shaped nanocrystal, respectively. The phase and morphology of the synthesized nanocrystals are confirmed using X-ray diffraction and transmission electron microscopy, demonstrating that the nanocrystals are phase-pure and have a consistent morphology. The extinction coefficient and quantum yield of the synthesized nanocrystals are calculated using UV-Vis absorption spectroscopy and photoluminescence spectroscopy. The rods and tetrapods exhibit extinction coefficients and quantum yields that are higher than that of the bare seeds. This synthesis demonstrates the precise arrangement of materials that can be achieved at the nanoscale by using a seeded synthetic approach.

The synthesis of multicomponent nanostructures has developed rapidly over recent years1. A range of II-VI semiconductor nanoheterostructures has been synthesized, including spherical core-shell particles2,3, seeded nanorods4,5, and seeded tetrapods6. These heterostructures allow for sophisticated manipulation of photons and carriers at the nanoscale and exhibit many interesting phenomena, including extremely high extinction coefficients, polarized emission4 and high quantum yields2,7.

The synthesis of multicomponent nanostructures requires precise control over the composition, phase, shape, size, and connectivity of each component. Control over these various factors relies largely on the ability to independently modulate the rate of nucleation and growth8,9,10. One strategy to achieve independent control over nucleation and growth is to separate these two processes into separate synthetic steps. Here, we will show how small seeds of CdSe generated under reaction conditions optimized for nucleation and growth of spherical nanocrystals can then be transferred to a second flask where the growth of CdS occurs under reaction conditions optimized for anisotropic growth of rod-shaped arms6. By tuning the crystal structure of the CdSe seed from wurtzite to zinc-blende, we will demonstrate how the morphology of CdSe/CdS heterostructures grown under similar conditions can be changed from a nanorod to a tetrapod, highlighting the precise control over phase, shape, and size afforded by state-of-the-art nanoparticle synthesis methods. Nanostructures of the cadmium chalcogenides have served as a useful model-system for the development of new synthetic techniques, as this material system has been intensively explored; although the synthesis of a particular nanostructure is shown in this video protocol, the same techniques are applicable to the synthesis of numerous other nanostructures.

Small differences in the techniques and reagents employed in nanoparticle syntheses have been shown to create dramatic differences in the final product. For instance, the temperature ramp rate11 and impurities12-14 present during the synthesis have been shown to dramatically impact the size and shape of the nanocrystals. With identification of the specific factors to which the synthetic procedures are highly sensitive, the reproducibility of nanocrystal syntheses continues to improve. This detailed video protocol is intended to help new practitioners in the field avoid many common pitfalls associated with the synthesis of nanoparticles.

Please consult all relevant material safety data sheets (MSDS) before use. Several of the chemicals used in these syntheses are acutely toxic and carcinogenic. Nanomaterials may have additional hazards compared to their bulk counterpart. Please use all appropriate safety practices when performing a nanocrystal reaction including the use of engineering controls (fume hood, glovebox) and personal protective equipment (safety glasses, gloves, lab coat, full-length pants, closed-toe shoes). Portions of the following procedures involve standard air-free handling techniques15.

Absorption spectra, photoluminescence (PL) spectra, X-ray diffraction (XRD) patterns, and transmission electron microscopy (TEM) images were collected for the seeds (Figure 1) and the final heterostructures (Figure 2). The absorption and PL spectra are used to calculate the extinction coefficient and quantum yield of the nanostructures. XRD and TEM are used to determine the phase and morphology of the nanostructures. 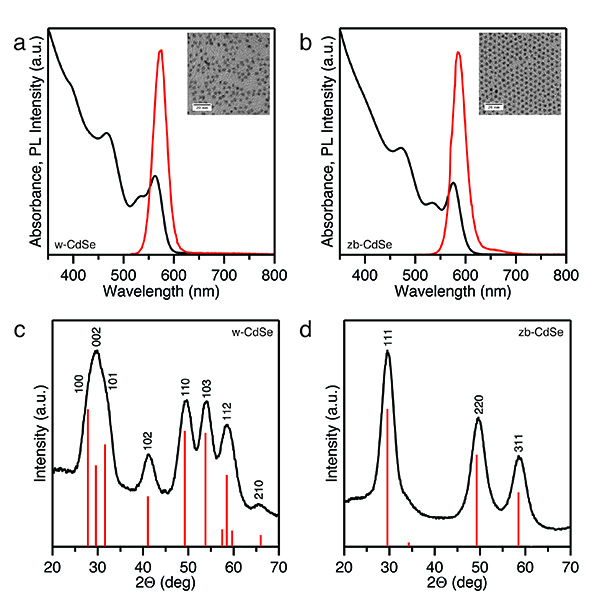 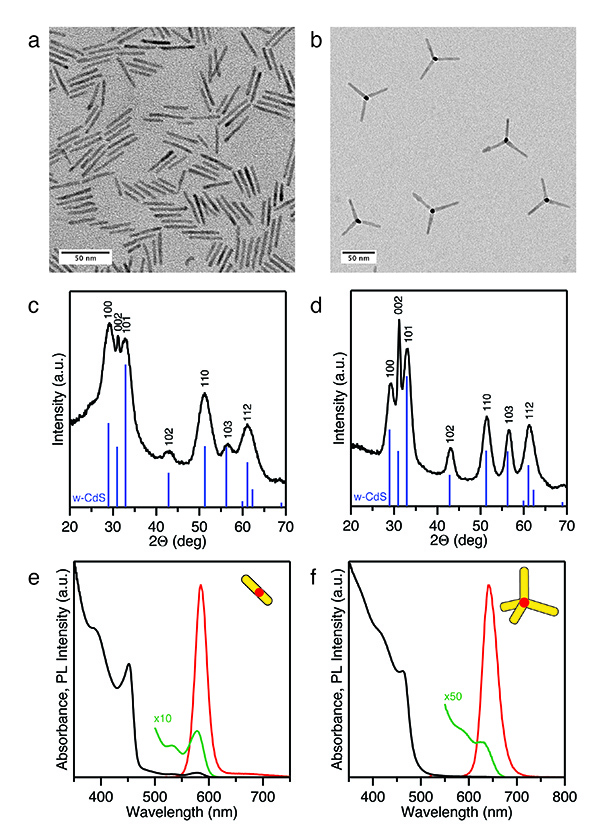 The optical spectra for the w-CdSe and zb-CdSe seeds exhibit clear excitonic absorption (Figures 1a and 1b) as the seeds are highly monodisperse; the energy of the first exciton corresponds to diameters of 3.3 nm and 3.6 nm for w-CdSe and zb-CdSe, respectively. The seeds also exhibit strong photoluminescence, with quantum yields ranging from approximately 3-30%, depending on the method of preparation of the sample; for instance, a greater number of cleaning steps tends to remove the surface ligands and lead to lower quantum yields6. The narrow full width at half-maximum of the PL peak (31 nm and 33 nm for the w-CdSe and zb-CdSe nanocrystals, respectively) is consistent with size distributions of 5-10%21.

The X-ray diffraction patterns collected for the seeds (Figures 1c and 1d) confirm that they are of the desired phase. The wurtzite phase has clear reflections at 41.1° and 53.8° that are absent for the zinc-blende phase. The peak broadening arises from Scherrer broadening due to finite crystal size.

The differences in the crystal structure of the CdSe seeds lead to dramatically different morphologies of the final heterostructure (Figures 2a and 2b)6. w-CdS nucleates and grows from the (001) and (00

) facets of the w-CdSe, leading to a final rod-shaped particle since there is uniaxial growth. In contrast, w-CdS nucleates and grows off the {111} facets of zb-CdSe. Of the eight {111} facets, four exhibit lower coordinative saturation than the others; as a result, we observe more rapid growth of w-CdS off of these four facets, which leads to a tetrapod morphology22. The seeded rods and tetrapods display high crystallinity, corresponding to wurtzite CdS as confirmed by XRD (Figures 2c and 2d).

Because the CdS portion of the heterostructures is much larger compared to the CdSe seed, the absorption due to the seeds is a small percentage of the overall absorption. As a result, the heterostructures absorb weakly at wavelengths longer than 500 nm, where the majority of absorption is due to the CdSe seed (Figures 2e and 2f). At wavelengths shorter than 500 nm, absorption is dramatically enhanced since the larger bandgap CdS begins to absorb significantly. The extinction coefficients for the seeds are on the order of 105 M-1cm-1, while the rods and tetrapods have significantly enhanced extinction coefficients6 of 107 M-1cm-1 and 108 M-1cm-1, respectively. For both the rods and tetrapods, the first excitonic transition for the heterostructures is red-shifted compared to the bare seeds (Figures 2e and 2f) since the electrons and holes are spread out over a larger particle.

Depending on the particular size of the components of the heterostructure and the resulting band structure, the hole tends to be somewhat confined to the seed while the electron is more free to move throughout the entire particle23. As a result, recombination occurs away from the particle surface, leading to quantum yields for rods above 75% and for tetrapods between 35-70%, which are significantly higher than that of the bare CdSe seeds6. Furthermore, the inorganic passivation from the CdS on the CdSe seeds provides enhanced environmental stability.

We have demonstrated a method for controlling the final morphology of a nanoscale heterostructure via control over the crystal structure of the seed. This same seeded-growth approach has already been applied to a wide range of structures, and we expect that the types of heterostructures that can be synthesized by this approach will continue to expand.