This article describes an in situ hybridization protocol optimized for colormetric detection of microRNA expression in formalin fixed kidney sections.

In this article we describe a method for colorimetric detection of miRNA in the kidney through in situ hybridization with digoxigenin tagged microRNA probes. This protocol, originally developed by Kloosterman and colleagues for broad use with Exiqon miRNA probes1, has been modified to overcome challenges inherent in miRNA analysis in kidney tissues. These include issues such as structure identification and hard to remove residual probe and antibody. Use of relatively thin, 5 mm thick, tissue sections allowed for clear visualization of kidney structures, while a strong probe signal was retained in cells. Additionally, probe concentration and incubation conditions were optimized to facilitate visualization of microRNA expression with low background and nonspecific signal. Here, the optimized protocol is described, covering the initial tissue collection and preparation through the mounting of slides at the end of the procedure. The basic components of this protocol can be altered for application to other tissues and cell culture models.

Understanding which cell types and structures express miRNAs is an important part of understanding the mechanisms through which alterations in miRNA expression influence cell and tissue phenotypes. While methods such as miRNA sequencing, qPCR and Northern blotting can be used for detection of miRNAs in whole tissues, this approach does not allow one to determine which specific cell type they came from within a given tissue. Dissection of cellular and structural components prior to analysis using these methods can be very difficult and the conditions needed to achieve adequate isolations can lead to alterations in gene expression or degradation of RNAs. microRNA in situ hybridization is a method used to visualize microRNA location and expression levels in tissues. This technique is especially valuable in tissues composed of heterogeneous structures, such as the kidney.

MicroRNAs have been shown to play an regulatory role in kidney development2,3 and physiology4. microRNA expression alterations have also been shown to be involved with renal pathology such as fibrosis5-10, diabetic nephropathy7, renal carcinoma11,12, and acute kidney injury13. In our research, we have found that optimizing microRNA in situ hybridization for kidney tissues was valuable for determining the exact structural locations of miRNA expression in both health and disease14. Determination of the tubular and cellular expression of different microRNAs is important because their regulation of targets may be dependent on cellular functions. In diseased states it is also important to determine how alterations in miRNA expression may be impacting function.

The goal of the method described here was to build upon existing ISH methodologies developed by Kloosterman et al.15, other investigators16,17, and those suggested by Exiqon1 and optimize the method for formalin fixed kidney tissues. We have successfully used this method to identify distinct regional differences in renal microRNA miR-382 expression with unilateral ureteral obstruction18. This approach can be used with other tissues as well, with additional optimization.

The areas of a tissue section that become dried out during the hybridizations, incubations or wash steps generally end up staining more darkly during the NBT/BCIP development. Figure 1 shows a portion of a kidney section in which the HybriSlip slipped off of the edge of the tissue, allowing it to become partially dehydrated. Despite rehydration and coverage in the remaining steps, the signal in the dehydrated portion is artificially high.

The importance of controlling the time of NBT-BCIP development is demonstrated in Figures 2A and 2B. Development periods of longer than 4-5 hr result in pronounced nonspecific color development in scrambled-miR control probed tissues throughout the kidney (Figure 2A). Kidneys probed for high abundance targets, such as the U6 small nuclear RNA control, do not exhibit improved signals with incubations longer than 4-5 hours (Figure 2B).

The applicability of the ISH method described here to miRNA detection in kidney tissue is demonstrated in Figure 3, a figure reproduced from Kriegel et al.18 In that study we found that unilateral ureteral obstruction (UUO) induced a nearly 3-fold increase in qPCR detected miR-382 expression in homogenized kidney tissue when compared to sham operated animals. This increase was blocked by intravenous deliver of anti-miR-382 (data not shown). The use of ISH on these kidney tissues indicated that the miR-382 detection provided by this probe was sensitive enough to provide quantifiable results that mirrored qPCR based expression analysis. Additionally, ISH allowed us to measure distinct regional differences in miRNA expression within the kidney. 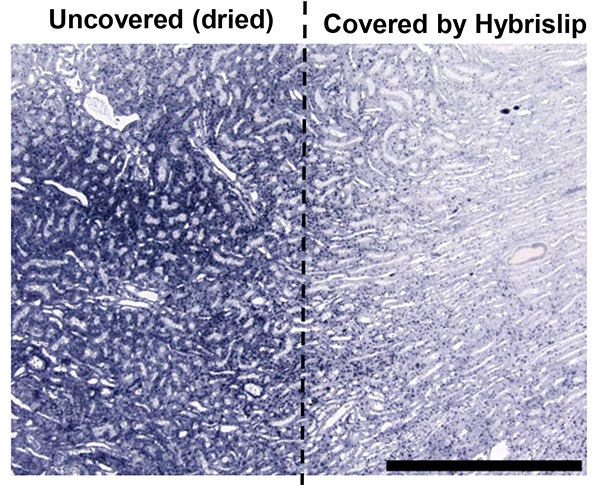 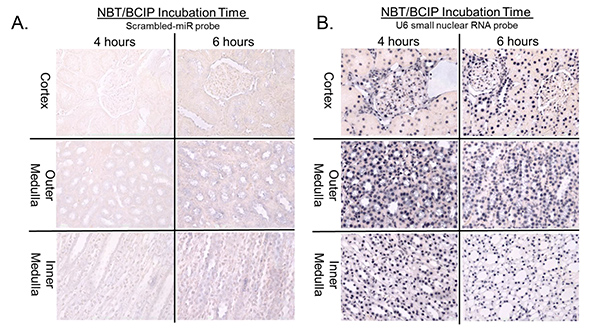 Figure 2. Optimization of the duration of NBT/BCIP development. Allowing the NBT/BCIP development to continue for more than 4-5 hr results in significant background staining in scrambled-miR probed tissues (Figure 2A), while providing no further improvement in the signal in the positive control, U6 small nuclear RNA probed samples (Figure 2B). Click here to view larger image. 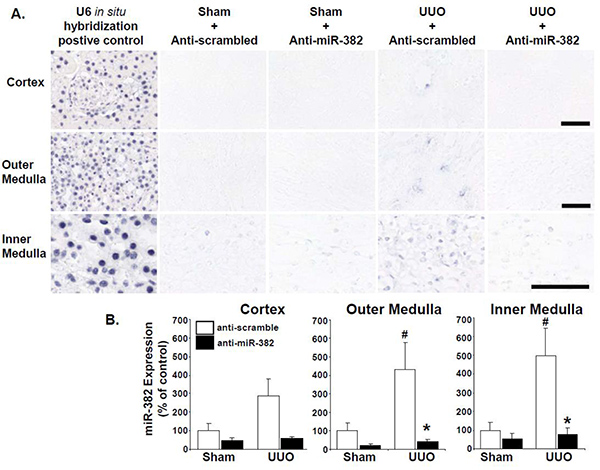 The goal of this article was to describe a protocol for miRNA in situ hybridization that works well in formalin fixed kidney tissues. While working out this protocol several important sources of staining artifact have been identified. Careful attention to these points can help avoid staining artifact and increase the likelihood of a successful ISH run.

One of the most avoidable causes of staining artifact can occur when tissue sections become dried out during long incubations. When this occurs the portion of the tissue that becomes dried will stain very darkly during the NBT/BCIP development (Figure 1). Throughout this protocol it is critical that the tissue sections remain completely covered by liquid throughout all incubations and that the slides are kept completely level. Additionally, the tissue sections should remain completely covered by HybriSlips during long incubations such as hybridization steps and the antibody incubation, to help prevent liquid loss. If partial or complete drying of a tissue section is observed it is unlikely that the samples will yield optimal staining, which will not allow miRNA expression to be interpreted in those samples.

Other steps in the protocol where liquid coverage is essential are during the proteinase K digestion and paraformaldehyde treatment. This digestion is needed to permit access of the miRNA probe into the cells. If the coverage of the tissue is incomplete during this short incubation, the areas that are not exposed to the enzyme digestion will not permit as much probe to enter and bind, and will ultimately not stain as darkly as other as other areas of the tissue. When applying this protocol to other tissue types, the duration of proteinase K digestion may need to be optimized. The subsequent paraformaldehyde fixation is also essential to prevent loss of miRNAs following permeabilization.

The duration of NBT/BCIP development is also an important variable to control. We found that NBT/BCIP incubations of longer than 4 or 5 hr significant background artifact begins to develop in the tissues probed with the scrambled-miR control probes (Figure 2A). Four hours of NBT/BCIP development is sufficient for detection of probe targets expressed in relatively high abundance, such as the U6 small RNA positive control (Figure 2B). Longer incubations do not appear to allow for additional low level expression to be detected, rather this may simply results in increased background artifact.

This leads to the important issue of the detectability of lower expressed miRNAs. Though we have found the 5’ digoxigenin conjugated probes to provide us with sufficient detection sensitivity for our applications in kidney. The alkaline phosphatase based color development allows for multiple signal particles to be measured for each molecule of probe, however some low level miRNA still may not be detectable. Exiqon had developed miRNA probes that are labeled on both the 5’ and 3’ ends allowing for the potential for twice the colorimetric development per microRNA molecule. While our lab has not tested these probes, their use in kidney tissues with a similar protocol has been reported8.

This basic protocol can be adapted to other tissue types and miRNA probes by optimizing proteinase K digestion time, miRNA probe concentrations, hybridization temperatures, and NBT/BCIP development times. It is also possible to use the first portion of the protocol in combination with fluorescent antibodies in tissues where autofluorescence is appropriately low.

There is nothing to disclose.

This work was supported by US National Institutes of Health grants HL082798 and HL111580.