Fatty acids are essential for numerous cellular functions. They serve as efficient energy storage molecules, make up the hydrophobic core of membranes, and participate in various signaling pathways. Caenorhabditis elegans synthesizes all of the enzymes necessary to produce a range of omega-6 and omega-3 fatty acids. This, combined with the simple anatomy and range of available genetic tools, make it an attractive model to study fatty acid function. In order to investigate the genetic pathways that mediate the physiological effects of dietary fatty acids, we have developed a method to supplement the C. elegans diet with unsaturated fatty acids. Supplementation is an effective means to alter the fatty acid composition of worms and can also be used to rescue defects in fatty acid-deficient mutants. Our method uses nematode growth medium agar (NGM) supplemented with fatty acidsodium salts. The fatty acids in the supplemented plates become incorporated into the membranes of the bacterial food source, which is then taken up by the C. elegans that feed on the supplemented bacteria. We also describe a gas chromatography protocol to monitor the changes in fatty acid composition that occur in supplemented worms. This is an efficient way to supplement the diets of both large and small populations of C. elegans, allowing for a range of applications for this method.

To study the physiological effects of dietary fatty acids, we have developed a biochemical assay compatible with genetic analysis using both mutant and RNAi knock-down techniques in C. elegans. Supplementation with specific PUFAs is achieved by adding a fatty acid sodium salt solution to the agar medium prior to pouring. This results in PUFA uptake by the E. coli food source, where it accumulates in the bacterial membranes. C. elegans ingest the PUFA-containing bacteria, and this dietary supplementation is sufficient to rescue the defects of PUFA-deficient mutants. Supplementation of most fatty acids has no detrimental effects on wild type animals, however, specific omega-6 fatty acids, especially dihomo-gamma linolenic acid (DGLA, 20:3n-6) cause a permanent destruction of C. elegans germ cells7,8 .

Polyunsaturated fatty acids are sensitive to heat, light and oxygen. Therefore, care must be taken when preparing fatty acid supplementation plates such that fatty acids are not exposed to excess heat and light. NGM media containing 0.1% Tergitol (NP-40) is autoclaved and partially cooled, after which fatty acid sodium salts are added with constant stirring. The plates are allowed to dry in the dark. Uptake of fatty acids by C. elegans cultured on these plates can then be monitored by gas chromatography.

Overall fatty acid composition of C. elegans can be determined by producing fatty acid methyl esters (FAMEs) which are then separated and quantified using gas chromatography4.

Supplementation of the C. elegans diet is limited by the ability of the bacterial food source to uptake and incorporate fatty acid into the bacterial membrane. To determine the ability of E. coli OP50 to assimilate various fatty acids into its membranes, OP50 was plated onto media with no supplement, 0.1 mM and 0.3 mM concentrations of stearic acid (18:0), sodium oleate (18:1n-9), and sodium DGLA (20:3n-6). Plates were dried at room temperature for 2 days in the dark, and incubated at 20 °C for 3 days. Bacterial lawns were collected by gently scraping the lawn into water with a flame-sterilized spatula. Bacteria were pelleted by centrifugation, and treated with 2.5% H2SO4 in methanol to produce fatty acid methyl esters, which were analyzed by GC/MS following the methods listed in the Procedure, step 3. The results demonstrate that unsaturated fatty acids (oleate and DGLA) incorporate into OP50 in higher amounts than the saturated fatty acid stearic acid (Figure 1A).

We have previously shown that dietary DGLA causes sterility in C. elegans10. Figure 2 illustrates the dose response of DGLA induction of sterility in C. elegans. The concentration of DGLA in worm lipids in which 50% of the population will be sterile is approximately 12%. Interestingly, the response to DGLA can be altered by genetic mutations in C. elegans. A recent finding is that the insulin growth factor-dependent stress pathways can suppress the DGLA-induced germ cell destruction8. Supplementing the diet of worms containing deleterious mutations in either the daf-2 insulin/IGF receptor, daf-2(e1370), or the daf-16/FOXO transcription factor, daf-16(mu86), illustrates the usefulness of this method to unravel genetic pathways that influence the physiological effects of dietary fats. Synchronized L1 larvae were pipetted onto DGLA supplemented media. After 3-4 days of growth, worms were scored for sterility, as determined by the absence of eggs in the uterus of adult worms. DGLA supplemented daf-2(e1370)mutants were fertile, with little to no induced germ cell loss compared to wild type (N2) worms at both 0.15 mM and 0.3 mM supplementations (Figure 3).In contrast, DGLA supplemented worms with inactive FOXO (daf-16(mu86)) displayed a higher percentage of sterile worms compared to wild type when fed on plates containing 0.15 mM DGLA (Figure 3). 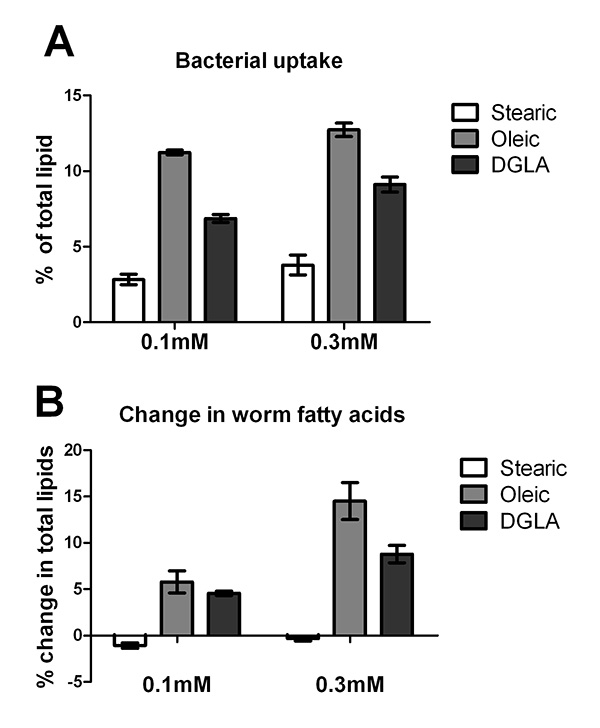 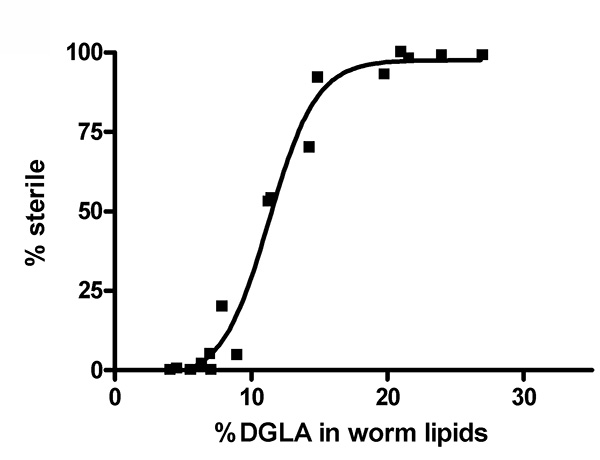 Here we describe a method of supplementation of C. elegans with dietary unsaturated fatty acids. As mentioned above, care must be taken in the preparation of PUFA supplemented plates because the reactive nature of the double bonds in PUFAs causes these fatty acids to be sensitive to oxidation through heat and light11. To avoid oxidation, it is important to add the PUFA to the liquid agar medium after the media has cooled to 55 °C and stores plates in a dark environment.

Others have introduced free fatty acids to C. elegans using a DMSO or ethanol carrier, or else by directly adding fatty acids by microinjection into the vulva12-14. Partial rescue of mutant phenotypes was achieved by fatty acid supplementation of growth plates without the use of Tergitol(NP40)14-15. There are apparently a variety of effective ways to introduce fatty acid into C. elegans, although it is difficult to compare the efficiency of various methods because, in most experiments, the uptake of the fatty acids in the nematodes was not monitored. We find that our method allows consistent and efficient supplementation of unsaturated fatty acid to population sizes of a few nematodes to tens of thousands.

We have found it essential to monitor the uptake of supplemented fatty acids in C. elegans to aid in the interpretation of experimental outcomes. For example, the uptake of fatty acid by the bacteria food depends on the E. coli strain used as a food source for the nematodes. We have found that OP50 takes up greater amounts of unsaturated fatty acids than E. coli strains HT115, HB101, or NA22, strains commonly used for feeding RNAi experiments (HT115) or used for high density nematode growth (HB101 and NA22). Because of the variation in uptake of certain fatty acids, it is important to test several concentrations of fatty acid and to monitor uptake using gas chromatography. Most labs have achieved rescue of mutant phenotypes using fatty acid concentrations in the range of 0.08-0.2 mM5,6,15-18, however, effects on lifespan have been reported with supplementation of arachidonic acid at a concentration as low as 0.01 mM14, and others have used doses as high as 0.6 mM for rescue of a phenotype induced by feeding RNAi using the HT115 E. coli strain19. In our hands, supplementation of E. coli OP50 with very high concentrations of PUFAs, greater than 0.4 mM, result in excessive dietary PUFA accumulation in worm lipids, up to 50% of total fatty acids. This leads to nonspecific slow growth and abnormalities of the vulva.

Our method provides reproducible supplementation of mono- and polyunsaturated fatty acids, including fatty acids not normally produced by C. elegans, such as docosahexaenoic acid (DHA, 22:6n-3). Growth and neurological defects in PUFA-deficient mutants such as fat-3 can be rescued by relatively low levels of dietary PUFA5. Fatty acid supplementation can be used by researchers who wish to alter the fatty acid composition of C. elegans by dietary means in order to study a range of physiological processes.

We thank Chris Webster for performing the preliminary experiments shown in Figure 3 of the representative results and Jason Watts and Chris Webster for helpful comments on the manuscript. Funding for this study was provided by a grant from the National Institutes of Health (USA) (R01DK074114) to JLW. Some nematode strains used in this work were provided by the Caenorhabditis Genetics Center, which is funded by the NIH Office of Research Infrastructure Programs (P40 OD010440).