Skip to content
Trial ends in Request Full Access Tell Your Colleague About Jove
This is a sample clip. If you're new to JoVE sign up and start your free trial today to watch the full video! If your institution has an existing subscription, log in or sign up to access this video.
Neuroscience
Author Produced
CITE THIS  SHARE

The protocol for dynamic longitudinal imaging and selective laser lesion of nerve endings in reporter transgenic mice is presented.

Nerve endings in skin are involved in physiological processes such as sensing1 as well as in pathological processes such as neuropathic pain2. Their close-to-surface positioning facilitates microscopic imaging of skin nerve endings in living intact animal. Using multiphoton microscopy, it is possible to obtain fine images overcoming the problem of strong light scattering of the skin tissue. Reporter transgenic mice that express EYFP under the control of Thy-1 promoter in neurons (including periphery sensory neurons) are well suited for the longitudinal studies of individual nerve endings over extended periods of time up to several months or even life-long. Furthermore, using the same femtosecond laser as for the imaging, it is possible to produce highly selective lesions of nerve fibers for the studies of the nerve fiber restructuring. Here, we present a simple and reliable protocol for longitudinal multiphoton in vivo imaging and laser-based microsurgery on mouse skin nerve endings.

Cutaneous nerve endings undergo dynamical changes under different pathophysiological states. Nerve fibers can go through the process of degeneration and regeneration or restructuring in the course of such diseases as peripheral neuropathy2 or Morton’s neuroma3. After traumatic injury, an important part of nerve endings dynamics in skin is reinnervation of the damaged area. However, the common approach for investigation of nerve endings is ex vivo histological sectioning that lacks real-time information on the ongoing processes4. Using genetically encoded fluorescent markers, it is possible to track the nerve endings in skin of live animals, thus obtaining rich and significantly more relevant information on the structural changes. The investigation of cutaneous nerve endings is possible using conventional fluorescent microscopy, however, the strong light scattering of the skin tissue strongly undermines the quality of the data acquired5. Multiphoton microscopy allows acquisition of high-resolution images in the strongly scattering tissues due to the non-linear summation of energy of excitation light photons resulting in emission of fluorescence only from the focal point of the objective. This effect leads to a robust increase in the penetration depth and improvement of signal-to-noise ratio for the measurement in skin tissues6.  Using the same laser as for imaging, it is possible to produce selective dissection of the nerve fibers7. In the following protocol we show the method of longitudinal imaging of cutaneous nerve endings in vivo in reporter transgenic mice combined with selective laser lesion using commercially available multiphoton microscope system.

Procedures involving animal subjects have been approved by the National Animal Experiment Board, Finland.

Using the described technique it is possible to track the same fiber after the lesion and to study the degradation of the damaged nerve endings (Figure 1). Acquisition of the stack with the thickness of 120-150 µm is usually proper for the repetitive imaging during several days in order to keep the whole fiber in the field of view.

The lesion typically can be produced concisely when the plastic packaging material is adjusted to flatten the skin, so the collagen layers appear with uniform intensity on the image (Figure 2). The nerve endings above the collagen layer are the most suitable to produce the precise lesion.

In case the skin is not flattened, the image may occur to be blurred (Figure 3). The intensity in this situation can still be suitable for morphological investigations of the nerve fibers but the laser lesion procedure would be hindered. 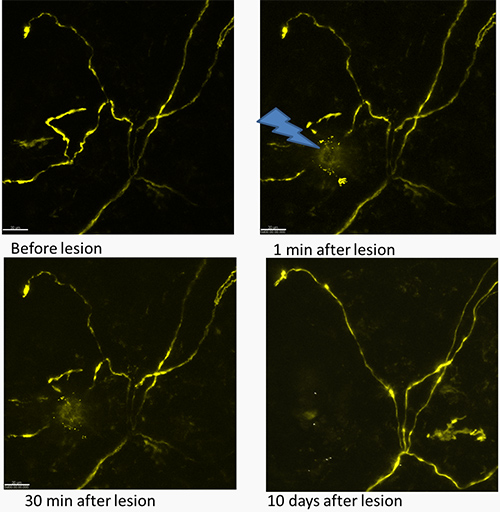 Figure 1. Time track of the effect of laser lesion on the nerve fiber presented as maximum projection images. The upper images show the fiber before and directly after the lesion, the lower panel shows the same fiber after 30 min and 10 days (left and right panels, correspondingly). There are some YFP expressing structures of non-neuronal nature that appear 10 days after lesion. These structures are likely to be keratinocytes that are known to express Thy1 gene transiently under traumatic conditions. The YFP fluorescence of nerve fibers is shown in yellow. An arrow marks the region of the lesion. Scale bar 30 µm. 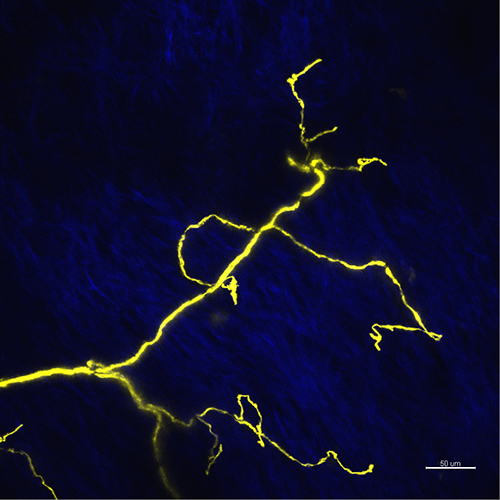 Figure 2. Maximum projection image for nerve endings in flattened skin area. The YFP fluorescence of nerve fibers is shown in yellow, the second harmonic generation of the collagen is shown in blue. Scale bar 50 µm. 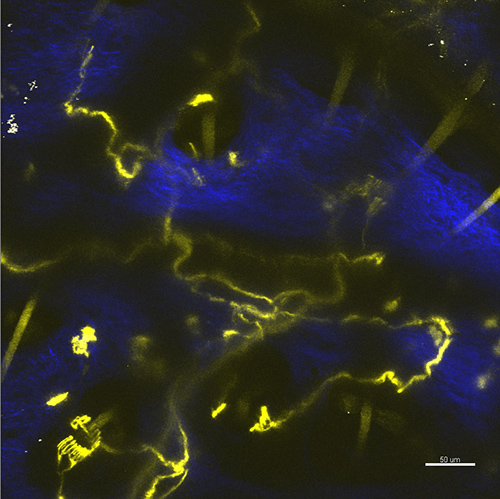 Figure 3. The nerve endings in the curved area of the skin obtained as a maximum z-projection for multiple optical sections. The YFP fluorescence of nerve fibers and autofluorescence of the hair is shown in yellow, the second harmonic generation of the collagen is shown in blue. Scale bar 50 µm. 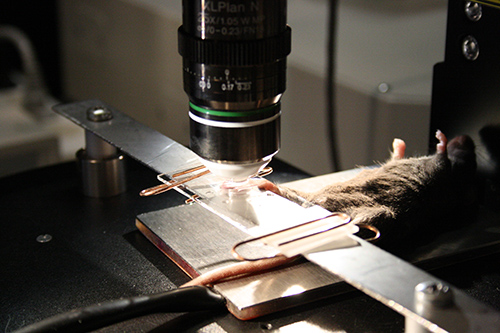 Figure 4. The paw fixation procedure using the microscope glass slide as a cover. The slide is attached to the metal bar using standard paper clips.

In this video protocol we demonstrate the method for non-invasive longitudinal two-photon imaging of single nerve endings.

The dynamics of skin innervations is affected in such diseases as psoriasis and peripheral neuropathy2, and in traumatic injuries9. Two-photon imaging allows detailed analysis of the nerve fibers structures in collagen matrix. The use of transgenic reporter mice helps to avoid the problems concerning the staining of the nerve fibers. Thy1-YFP-H strain seems to be sufficiently robust for morphological data analysis10 whereas the Thy1-mitoCFP mice may provide an opportunity of functional studies of mitochondrial dynamics in the nerve fibers11. The YFP-16/ICR line can be used for the observation of Meissner bodies12.  The alternative approach may be the viral injection into dorsal root ganglion for the selective tracking of specific neuronal populations13.

It is worth noticing that the production of selective lesion within the collagen matrix is strongly hindered in comparison to the upper layers of skin. That is why sometimes exposure times for the dissection of nerve fibers can differ as much as tenfold while the intensity of the fluorescence for the imaging differs on the range of 10-20%. To maintain good quality of the image the constant immersion coupling has to be kept.

The resolution of the image usually depends on the desirable speed of acquisition. Typical time for production of a 30 frames- stack with resolution 800 x 800 pixels is 1 min, so one can decrease the resolution or thickness of imaged area to detect fast changes or increase resolution for fine morphological features studies.

Fixation of the footpad should be tight enough not to allow the drift of the image, but at the same time it should not affect the blood circulation in the skin. For optimization of the procedure, injections of blood vessels tracers (e.g., TexasRed labeled 70 kDa dextran) are possible, allowing one to adjust the plastic packaging material pressure via monitoring the blood flow. Motion artifacts in the preparation described in this protocol are unlikely because the animal is deeply anaesthetized, the paw itself is firmly attached to the fixation assembly, and because heartbeat and breathing movement are not directly transmitted to the paw. However, slight movements are possible especially if high magnification imaging is performed. In this case we can recommend using ImageJ plugins designed to compensate motion artifacts.

The repetitive imaging of the same area may be achieved by using such reference points as carpal pad14, or in case of injection of some substances in the footpad the spot of injection can serve as a landmark6. The other possibility is tattooing of the skin.

The authors would like to thank Neurotar Ltd. for technical assistance, CIMO Foundation and FGSN for financial support.

A correction was made to In Vivo Two-Photon Microscopy of Single Nerve Endings in Skin.

Leonard Khiroug was removed as an author.