The methods described in this paper show how to convert a commercial inkjet printer into a bioprinter with simultaneous UV polymerization. The printer is capable of constructing 3D tissue structure with cells and biomaterials. The study demonstrated here constructed a 3D neocartilage.

Bioprinting, which is based on thermal inkjet printing, is one of the most attractive enabling technologies in the field of tissue engineering and regenerative medicine. With digital control cells, scaffolds, and growth factors can be precisely deposited to the desired two-dimensional (2D) and three-dimensional (3D) locations rapidly. Therefore, this technology is an ideal approach to fabricate tissues mimicking their native anatomic structures. In order to engineer cartilage with native zonal organization, extracellular matrix composition (ECM), and mechanical properties, we developed a bioprinting platform using a commercial inkjet printer with simultaneous photopolymerization capable for 3D cartilage tissue engineering. Human chondrocytes suspended in poly(ethylene glycol) diacrylate (PEGDA) were printed for 3D neocartilage construction via layer-by-layer assembly. The printed cells were fixed at their original deposited positions, supported by the surrounding scaffold in simultaneous photopolymerization. The mechanical properties of the printed tissue were similar to the native cartilage. Compared to conventional tissue fabrication, which requires longer UV exposure, the viability of the printed cells with simultaneous photopolymerization was significantly higher. Printed neocartilage demonstrated excellent glycosaminoglycan (GAG) and collagen type II production, which was consistent with gene expression. Therefore, this platform is ideal for accurate cell distribution and arrangement for anatomic tissue engineering.

Bioprinting based on thermal inkjet printing is one of the most promising enabling technologies in the field of tissue engineering and regenerative medicine. With digital control and high throughput printheads cells, scaffolds, and growth factors can be precisely deposited to the desired two-dimensional (2D) and three-dimensional (3D) positions rapidly. Many successful applications have been achieved using this technology in tissue engineering and regenerative medicine1-9. In this paper, a bioprinting platform was established with a modified Hewlett-Packard (HP) Deskjet 500 thermal inkjet printer and a simultaneous photopolymerization system. Synthetic hydrogels formulated from poly(ethylene glycol) (PEG) have shown the capacity of maintaining chondrocyte viability and promote chondrogenic ECM production10,11. In addition, photocrosslinkable PEG is highly soluble in water with low viscosity, which makes it ideal for simultaneous polymerization during 3D bioprinting. In this paper, human chondrocytes suspended in poly(ethylene) glycol diacrylate (PEGDA; MW 3,400) were precisely printed to construct neocartilage layer-by-layer with 1,400 dpi in 3D resolution. Homogeneous distribution of deposited cells in a 3D scaffold was observed, which generated cartilage tissue with excellent mechanical properties and enhanced ECM production. By contrast, in manual fabrication the cells accumulated at the bottom of the gel instead of their initially deposited positions due to slower scaffold polymerization, which led to inhomogeneous cartilage formation after culture2,3.

The printer modification was based on a HP Deskjet 500 thermal inkjet printer and HP 51626a black ink cartridge.

The modified thermal inkjet printer was capable for cell and scaffold deposition at high throughput and excellent cell viability. Combining with simultaneous photopolymerization and photosensitive biomaterials, this technology is able to fix the cells and other printed substances to the initially deposited locations. According to the properties of the modified thermal inkjet printer, the 2D printing resolution was 300 dpi with a single ink drop volume of 130 pl. There are 50 firing nozzles in each printhead with 3.6 kHz firing frequency12,13. Therefore for a representative construct of 4 mm diameter and 4 mm height, the volume and thickness of each printed layer during layer-by-layer construction were 0.23 μl and 18 µm, respectively. The entire printing process took less than 4 min to construct the cartilage tissue (Figure 1).

Figure 2A shows an even cell distribution of printed chondrocytes in 3D scaffold due to simultaneous photopolymerization of the surrounding scaffold during cell deposition. By contrast, without simultaneous photopolymerization (scaffold polymerized after cell seeding), the deposited cells sank to the bottom or zonal interface instead of their initially deposited locations due to gravity (Figure 2B). This cell accumulation was also observed in previous reports of manual fabrication of cartilage tissue14,15. The printed human chondrocytes in 3D PEG hydrogel recovered chondrogenic phenotype and demonstrated gradually increased proteoglycan production during the culture (Figure 3)3. 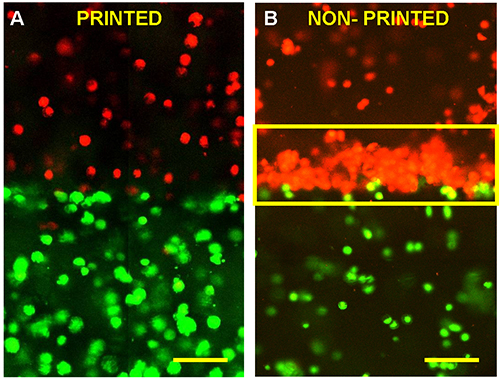 Figure 2. Chondrocytes labeled with green and orange fluorescent dyes demonstrated the zonal cartilage bioprinting feasibility. A) Printed cells maintained their initially deposited positions in the 3D hydrogel. The printing and photopolymerization process completed in 4 min with cell viability of 90% (n = 3). B) Cells accumulated to the bottom or interface due to gravity without simultaneous photopolymerization. It took 10 min of UV exposure to gel the construct with the same size of A with a cell viability of 63% (n = 3). Scale bars = 100 μm. 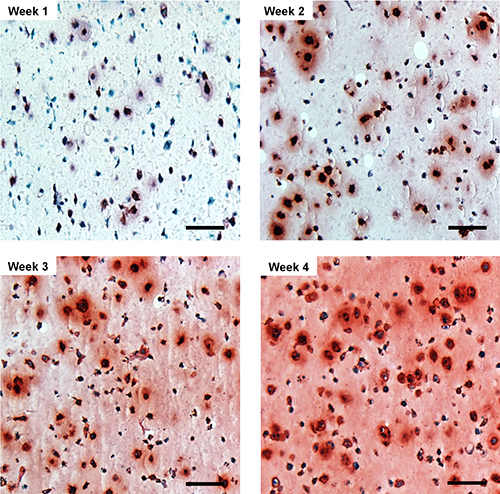 This 3D bioprinting system with simultaneous photopolymerization capacity provides a significantly greater printing resolution than the best previously reported method of in situ printing of osteochondral defects using syringe extruded a cellular alginate hydrogel16. Higher printing resolution is particularly critical for cartilage tissue engineering to restore the anatomic cartilage zonal organization. Simultaneous photopolymerization during layer-by-layer assembly is crucial to maintain precise deposition of cells and biomaterial scaffolds for 3D construction. Microfabrication with each printed layer also resulted in smooth transitions between zonal layers, minimizing the potential for degradation due to delamination. By precisely adjusting the bioprinting parameters and components of the bioink, we will be able to fabricate the complex 3D structures required to heal a wide variety of cartilage lesions.

With synergistic growth factor stimulation, the bioprinted neocartilage had the best chondrogenic phenotype and most cell proliferation3. Therefore, the cell seeding density used in this study, which is feasible for bioprinting, is also ideal for cartilage regeneration when treated with appropriate growth factors. Cartilage repair using autologous chondrocytes is greatly restricted in clinical applications due to the limited number of chondrocytes harvested in biopsy. Implanting the directly harvested autologous chondrocytes or mesenchymal stem cells (MSCs) along with biomaterials for cartilage repair without monolayer expansion is exceedingly attractive. Therefore, it is critical to expand the printed cell numbers to the optimal cell density required for cartilage formation without compromising the quality of the cartilage matrix given the limited cell numbers. Furthermore, limiting initial cell density will greatly optimize and maximize the bioprinting resolution. Thus, the bioprinting method described here is fully compatible with the low cell numbers in clinical setting and has the potential to be used for cartilage tissue engineering.

In conclusion, our work demonstrates the feasibility of fabricating anatomic cartilage structures by delivering chondrocytes and biomaterial scaffold materials to precise targeted positions. A PEG hydrogel with human chondrocytes was continuously bioprinted via layer-by-layer assembly. Simultaneous photopolymerization maintained the printed cells at their initial deposited positions and reduced phototoxicity. Cells in the printed neocartilage maintained chondrogenic phenotype with consistent gene expression and biochemical analysis2. Therefore, this technology is a promising advance for anatomic cartilage tissue engineering.

The authors have no financial interest in this study.

The authors would like to acknowledge the support from the New York Capital Region Research Alliance Grant.