Small-scale concentration of viruses (sample volumes 1-10 L, here simulated with spiked 100 ml water samples) is an efficient, cost-effective way to identify optimal parameters for virus concentration. Viruses can be concentrated from water using filtration (electropositive, electronegative, glass wool or size exclusion), followed by secondary concentration with beef extract to release viruses from filter surfaces, and finally tertiary concentration resulting in a 5-30 ml volume virus concentrate. In order to identify optimal concentration procedures, two different electropositive filters were evaluated (a glass/cellulose filter [1MDS] and a nano-alumina/glass filter [NanoCeram]), as well as different secondary concentration techniques; the celite technique where three different celite particle sizes were evaluated (fine, medium and large) followed by comparing this technique with that of the established organic flocculation method. Various elution additives were also evaluated for their ability to enhance the release of adenovirus (AdV) particles from filter surfaces. Fine particle celite recovered similar levels of AdV40 and 41 to that of the established organic flocculation method when viral spikes were added during secondary concentration. The glass/cellulose filter recovered higher levels of both, AdV40 and 41, compared to that of a nano-alumina/glass fiber filter. Although not statistically significant, the addition of 0.1% sodium polyphosphate amended beef extract eluant recovered 10% more AdV particles compared to unamended beef extract.

Human enteric viruses are important causative agents of waterborne diseases 1-3, but are generally present in low numbers in contaminated environmental waters, making their detection difficult without concentration. Procedures used to concentrate viruses typically include a filtration step, followed by filter elution, and secondary concentration of the filter eluate. A common filtration procedure relies on use of charged membranes such as electropositive filters (recently reviewed in 4,5). These filters rely on capturing viruses suspended in water using electrostatic interactions between the filter surface (positively charged) and targeted virus particles (negatively charged). Two electropositive filters that are commercially available rely on this technology, the glass/cellulose and nano-alumina/glass fiber filters. The glass/cellulose filter costs are up to 10 times that of the nano-alumina/glass fiber, which limit the use of the glass/cellulose filters for routine virus monitoring. Recent studies have concluded differences are nominal between these two filters in recovery of enteroviruses from ambient water 6,7, justifying the use of a cheaper filter alternative. Other filter options such as electronegative and glass-wool filters have been studied, however, they either require the pretreatment of source water (electronegative filters) or are not commercially available (glass-wool filters). The development of virus concentration procedures has mostly focused on optimizing primary concentration techniques (filters) in order to improve virus recoveries from water. However, secondary concentration procedures, which reduce the volume of eluant typically from 1 L to milliliter volumes, can also have a significant impact on virus recoveries 8.

Certain combinations of filters and secondary elution techniques can also affect virus recoveries. One study concluded that certain combinations of primary (electropositive filters) and secondary concentration techniques (celite or organic flocculation) had a significant impact of recovery of adenovirus 13. These findings suggest that optimization is required in order to optimally recover target virus from a given water matrix when using these techniques. Optimization is a time consuming, arduous process many researchers actively avoid since numerous variables will be evaluated (filter type/brand, pH elution solution, celite/organic flocculation).

For this study, a procedure was developed to identify optimal conditions for virus concentration from water using spiked human adenovirus strains 40 and 41. Presumably, since each virus type displays a unique capsid morphology and specific capsid charge, concentration protocols may need to be optimized for every virus target in order to attain optimal viral recovery. This study provides an approach for AdV 40 and 41 concentration by: 1) evaluating virus recoveries in tap water using electropositive filter discs followed by 2) evaluation of an established organic flocculation method versus the celite technique as a secondary concentration, and 3) evaluation of elution buffers for tertiary concentration.

1. Preparation of Glassware and Filter Housings

2. Preparation of Solutions and Virus Stock

One hundred milliliter volumes of virus-spiked, tap water were concentrated using either a pleated glass/cellulose or nano-alumina/glass fiber disc filter and were processed using either the celite or organic flocculation method. Filters were eluted with beef extracts at pH 7.5, 9.0, 9.5, 10, 11 and 12 to determine which would be most effective in eluting AdV particles from filters. The glass/cellulose filter coupled with beef extract at pH 10 and celite, produced the highest recoveries (by qPCR/MPN) for AdV40 (52% ± 22%) and AdV41 (64% ± 4%) which are shown in Figures 2 and 3. Beef extract pH 10 recovered significantly higher AdV41 than all other pH values (P value range: 0.0045-0.041), while AdV40 followed a similar, although somewhat weaker trend (P value range: 0.025-0.042). A glass/cellulose filter was also evaluated in conjunction with the organic flocculation method. For AdV40, significantly higher recoveries were gained using beef extract pH 10 (40% ± 10%) (P value range: 0.010-0.027), and for AdV41, both pH 9.5 and 10 outperformed all other beef extract pH tested (P value range: 0.023-0.027) (Figures 2 and 3). Overall, the celite technique with beef extract pH 10 was found to be superior to the organic flocculation method in direct comparisons for recovery of both AdV strains.

Optimizations of the beef extract additives

The optimized method (glass/cellulose filter using beef extract pH 10 coupled with celite secondary concentration) was compared to two other treatments: 1) addition of 0.25% trypsin and 2) supplementing the beef extract with 0.1% sodium polyphosphate. The addition of trypsin did not appear to improve recovery of AdV as only 16% ± 6% and 24% ± 14% of AdV40 and 41 inputs, respectively were recovered (Figure 4). Beef extract supplemented with 0.1% sodium polyphosphate yielded the highest recoveries of AdV40 and 41 compared to that of the previous optimized method. AdV40 recovery appeared to increase by 13%, and AdV41 recovery increased 7% over the previous method, but neither was statistically significant (P value: 0.146). Use of higher percentages of sodium polyphosphate 1%, 3% and 5% (data not shown) was found to be ineffective, requiring large volumes of acid to adjust pH of these solutions to 4.0 during secondary concentration. 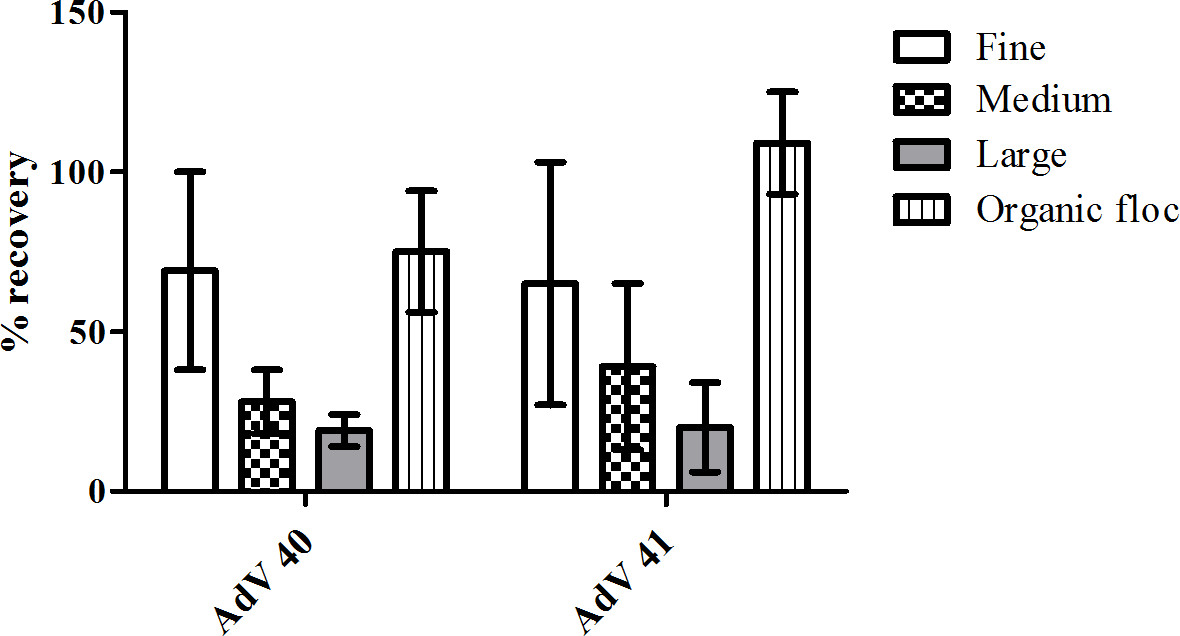 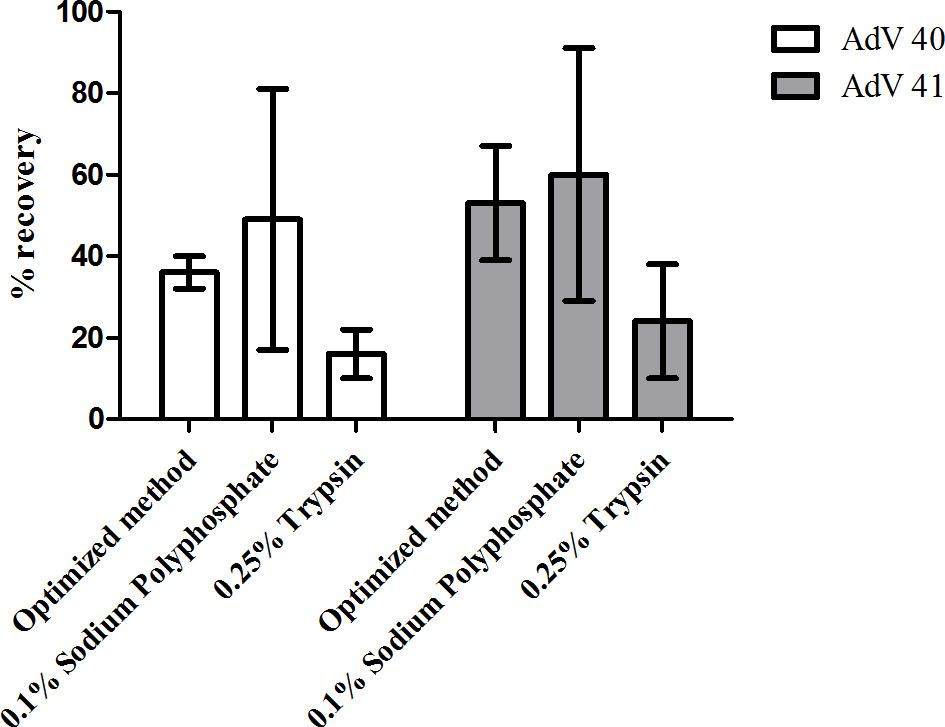 Electropositive filters are useful in concentrating viruses from water; however these filters can differ in their structure and composition which could in turn alter their effectiveness. Compounding this problem, capsid structures and charges vary between virus strains requiring concentration techniques be tailored to ensure optimal recovery 15. Through simple modifications of the existing concentration techniques (e.g., electropositive filters, beef extract elution), more effective concentration of target viruses can be achieved 16,17.

Due to varying outer capsid structures, certain viruses can become physically trapped within the filter matrix 21, necessitating the evaluation of different additives to filter elution protocols. For example, addition of surfactant, sodium polyphosphate improved both bacterial and viral recovery during primary concentration 6,13,22-24. On the other hand, low recoveries observed following addition of trypsin indicate that proteases do not aid in cleavage of the protein fibers on the outer viral capsid. Furthermore, while not uncommon 7,25,26, it is noteworthy that some of our recoveries were in excess of 100%. As previously shown 7,25,26, this is likely due to the clumping of laboratory prepared virus used as spike.

The small volume (100 ml virus spiked water) concentration approach presented can be a practical way to develop and optimize virus concentration methods, due to its simplicity and low consumption of resources along with quick sample processing time. Using such small volumes of water, the concentration of PCR inhibitors within the sample is also minimized, however it is recommended that each source water be evaluated for the presence of PCR inhibitors prior to experimentation. Since numerous choices of both filters and secondary concentration techniques exist, small volume concentration techniques allow for quick evaluations of numerous variables. It is hoped that these techniques could be deployed prior to large scale filtration experimentation to aid in identifying which conditions are optimal for target virus concentration per given water matrices.

The views expressed in this article are those of the authors and do not necessarily reflect the views or policies of the U.S. Environmental Protection Agency. Mention of trade names or commercial products does not constitute endorsement or recommendation for use.

We would like to thank Dr. Nicholas J. Ashbolt and Dr. G. Shay Fout for their review of the manuscript.