Skip to content
Trial ends in Request Full Access Tell Your Colleague About Jove
JoVE Journal
Medicine
This is a sample clip. Sign in or start your free trial.
Medicine
Author Produced
CITE THIS  SHARE

Differentiation and activation of osteoclasts play a key role in the development of musculoskeletal diseases as these cells are primarily involved in bone resorption. Osteoclasts can be generated in vitro from monocyte/macrophage precursor cells in the presence of certain cytokines, which promote survival and differentiation. Here, both in vivo and in vitro techniques are demonstrated, which allow scientists to study different cytokine contributions towards osteoclast differentiation, signaling, and activation. The minicircle DNA delivery gene transfer system provides an alternative method to establish an osteoporosis-related model is particularly useful to study the efficacy of various pharmacological inhibitors in vivo. Similarly, in vitro culturing protocols for producing osteoclasts from human precursor cells in the presence of specific cytokines enables scientists to study osteoclastogenesis in human cells for translational applications. Combined, these techniques have the potential to accelerate drug discovery efforts for osteoclast-specific targeted therapeutics, which may benefit millions of osteoporosis and arthritis patients worldwide.

Musculoskeletal diseases affect millions of people in the United States and present severe consequences for national and local health systems1. These disorders are characterized by loss of bone and joint function that require extensive treatment and long periods of recovery. Commonly, a relative increase in the number and/or activity of osteoclasts, cells specialized to resorb bone, in osteoporosis and arthritis is observed2. Under physiological conditions the number and activity of osteoclasts is regulated by receptor activator of nuclear factor κ-B ligand (RANKL), which is produced by osteoblasts. Osteoprotegerin (OPG), a decoy receptor for RANKL is also produced by osteoblasts3. In vivo animal models that involve systemic overexpression of sRANKL, or deletion of OPG are very valuable in osteoporosis research; however, these methods require the generation of transgenic mice4,5. Here, a novel alternative method of overexpressing sRANKL for the study of musculoskeletal-related disorders is described. Specifically, minicircle (MC) DNA technology and hydrodynamic delivery methods were used to achieve gene transfer of sRANKL in vivo and overexpress mouse sRANKL systemically6.

This method is also complementary to other in vivo models of osteoporosis, such as hormonal modulation of osteoclasts following ovariectomy7 and dietary intervention by low-calcium diet8. These models are very useful to study different aspects of musculoskeletal-related disorders however they require surgical procedures and may take up to several months, at a significant cost9. Ovariectomized (OVX) rodent model is an experimental animal model where removal of ovaries leads to estrogen deficiency thereby mimicking human postmenopausal osteoporosis10. Human post-menopausal osteoporosis, a condition where estrogen deficiency leads to increased risk of bone fractures and osteoporosis affects approximately eight million women in the United States alone. Although the OVX model is useful for post-menopausal osteoporosis it offers limited advantages in studying osteoporosis in general. Estrogen suppresses bone loss, by inducing osteoclast and inhibiting osteoblast apoptosis, therefore in its absence an increased osteoclast activity is observed10-12. A RANKL-OPG ratio imbalance that favors bone resorption is also observed13. However, estrogen deficiency in vivo is also accompanied by decreased levels of transforming growth factor β (TGF β), increased interleukin-7 (IL-7) and TNF, IL-1 and IL-614,15. As these cytokines have known bone remodeling modulatory functions independent of the RANKL pathway, it is impossible to attribute any osteoclast activation solely to the RANKL-RANK axis. The model described in this paper enables researchers to study in vivo RANKL-RANK axis in osteoclastogenesis and bone loss without pro-inflammatory cytokines compared to OVX rodent models.

Additionally, in vitro osteoclastogenesis techniques are essential tools to study osteoclast activation for potential therapeutic treatments of musculoskeletal diseases. Previous studies have also shown that culturing mouse bone marrow derived macrophages (BMMs) with mouse macrophage colony-stimulating factor (M-CSF) and mouse sRANKL can lead to osteoclast differentiation3,16,17. Here, the protocols to generate multinucleated osteoclast-like cells from mouse bone marrow as well as from human peripheral blood mononuclear cells (PBMCs) in vitro18 are described. The cell-based assays required to define a mature terminally differentiated and fully functional osteoclast are also briefly described. These in vitro techniques complement the novel in vivo approach and together serve as powerful investigative tools to study osteoclast differentiation and activation. Using these systems, scientists are able to generate osteoclasts in vivo and in vitro and define the stimuli and signals required for their proliferation and activation as well as test the efficacy of pharmacological and biological inhibitors.

Here, a novel gene transfer technique for differentiation of osteoclasts in vivo and cell culture protocols for differentiating precursor cells into osteoclasts in vitro as a method to study the effects of cytokines on osteoclastogenesis are described. In Figure 1, the representative results of successful gene transfer of GFP and mouse sRANKL MC in mice are shown. In Figure 2, the representative images of mouse bone marrow or human PBMC cell differentiation time course cultures of precursor cells to osteoclasts by bright field microscopy are shown. Figure 3, the representative images from three independent methods for characterizing mouse bone marrow derived osteoclasts are shown. The presence of mouse sRANKL activates the expression of TRAP (Figures 3A and B) and the formation of F-actin rings (Figures 3C and D). Scanning electron microscopy (SEM) reveals that mouse sRANKL induces the formation of giant cells capable of resorbing bone (Figures 3E and F). Figure 4, the same characterization methods on human PBMC derived osteoclasts are shown. 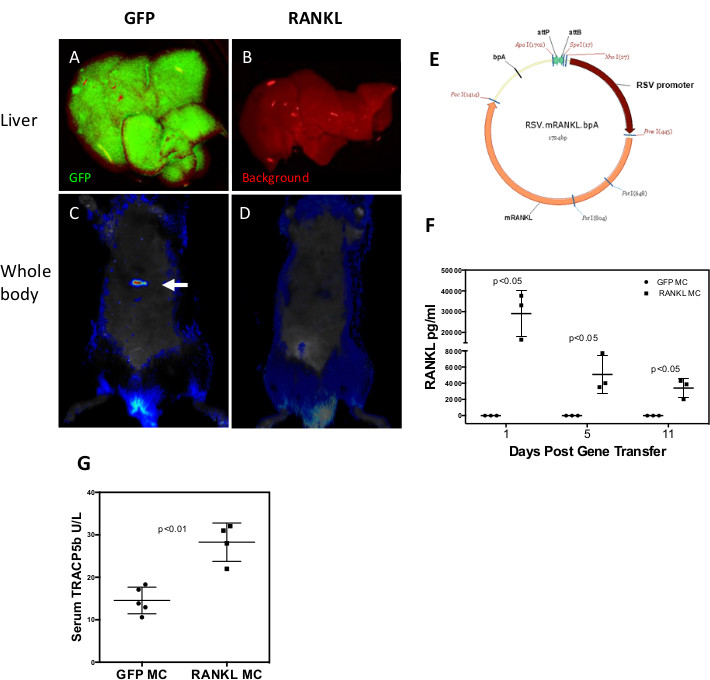 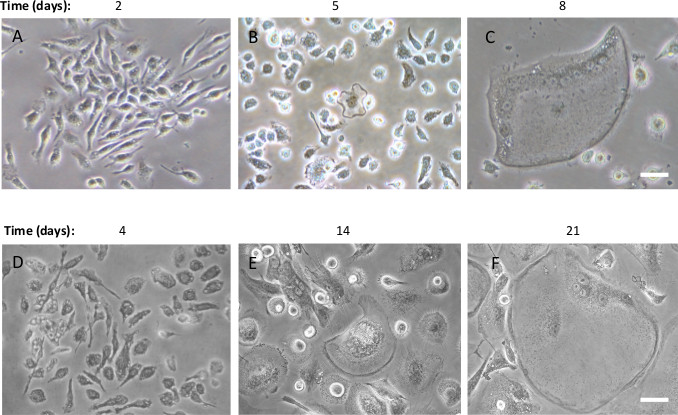 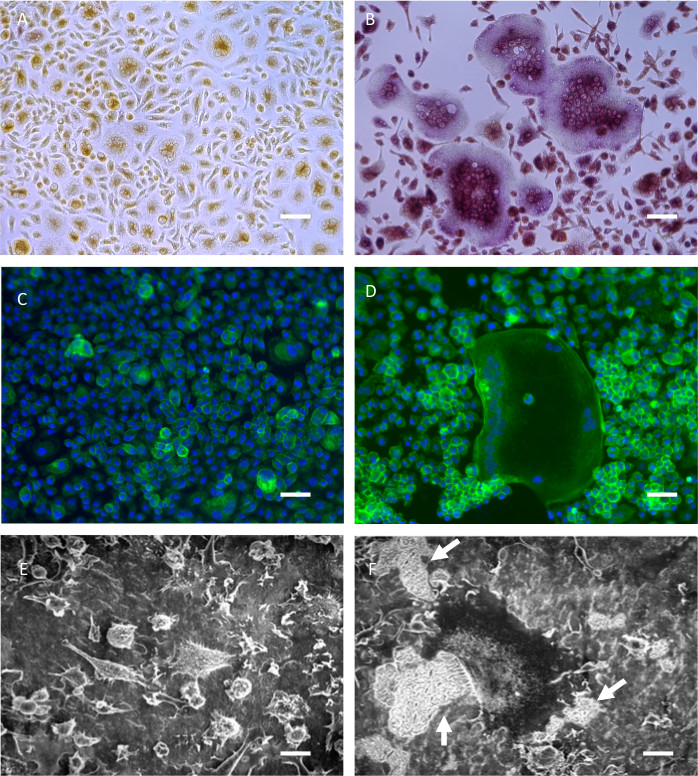 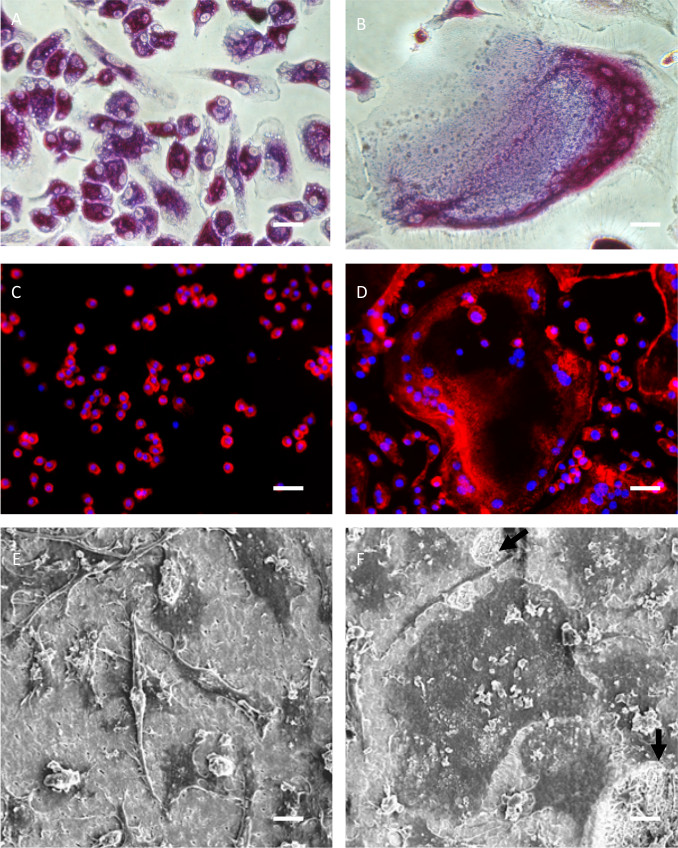 Musculoskeletal conditions are leading causes of morbidity and disability and are comprised of over 150 diseases and syndromes; affecting approximately 90 million Americans today. Joint inflammation and bone destruction are predominant features of musculoskeletal conditions, including arthritis and osteoporosis. Osteoporosis is a condition that weakens bone integrity, often leading to fractures of the bone. Arthritis is a chronic, debilitating disease characterized by inflammation of the joints that become swollen, tender and stiff–restricting normal movement and can lead to disability. Although the pathogenesis of musculoskeletal diseases greatly differs from one another, bone destruction is the overarching common feature. Bone destruction in musculoskeletal conditions is primarily caused by an imbalance between bone resorption and bone formation21,22. One therapeutic approach is to attempt to block the capacity of these cells to destroy bone23. The techniques and procedures outlined here allow the study of osteoclasts both in vivo and in vitro.

The in vivo model described here uses minicircles, which are small episomal DNA vectors (~4kb) freed from bacterial backbone, that also serve as transgene carriers24. Minicircles express transgenes 10-1,000 fold higher then normal bacterial plasmids with a stable expression for up to several months. The smaller molecular size of minicircles contributes to more efficient transfection rate and substantial expression compare to normal bacterial plasmids24. Therefore, minicircles are now widely applied in pre-clinical gene transfer studies25,26. Hydrodynamic delivery is a well-developed method based on hydrodynamic pressure in the capillaries to deliver plasmid DNA into the whole body of a mouse. Hydrodynamic gene delivery to hepatocytes via tail vein injection in mice is well-established to express transgene by plasmid DNA6. In these studies, overexpressing mouse sRANKL in the in vivo mouse model is achieved by sRANKL MC and hydrodynamic delivery via tail vein injections. Mouse sRANKL ELISA can be used to detect serum levels of RANKL in mice. Significant elevation of mouse serum TRACP5b, a bone resorption marker27, is observed in sRANKL gene transfer mice. Notably, this technique is not limited to overexpression of sRANKL; it can also be further applied to overexpress other secreted proteins28. The primary technical difficulty in this procedure is the hydrodynamic delivery via the tail vein. Apart from regular tail vein injection, hydrodynamic delivery requires delivery of minicircles in large volumes of physiological solution into the mice within 5-7 sec. Thus, steady handling and injection techniques are essential for success with this procedure. Generating sRANKL transgenic mice is another approach for in vivo osteoclastogenesis. However, a high level of sRANKL can lead to embryonic lethality4 and generating transgenic mice is also expensive and time-consuming.

The in vivo and in vitro techniques described here will facilitate the development of osteoclast inhibitors currently in pre-clinical studies, leading to efficacious therapeutic strategies for the millions of osteoporosis and arthritis patients worldwide.