This article details the enrichment of proteins associated with the synaptic plasma membrane by ultracentrifugation on a discontinuous sucrose gradient. The subsequent preparation of post-synaptic density proteins is also described. Protein preparations are suitable for western blotting or 2D DIGE analysis.

Neuronal subcellular fractionation techniques allow the quantification of proteins that are trafficked to and from the synapse. As originally described in the late 1960’s, proteins associated with the synaptic plasma membrane can be isolated by ultracentrifugation on a sucrose density gradient. Once synaptic membranes are isolated, the macromolecular complex known as the post-synaptic density can be subsequently isolated due to its detergent insolubility. The techniques used to isolate synaptic plasma membranes and post-synaptic density proteins remain essentially the same after 40 years, and are widely used in current neuroscience research. This article details the fractionation of proteins associated with the synaptic plasma membrane and post-synaptic density using a discontinuous sucrose gradient. Resulting protein preparations are suitable for western blotting or 2D DIGE analysis.

Neurons communicate through synapses, and the quality of this communication is regulated to a large extent by alterations in the composition of proteins at the synapse. In particular, the proteins located in the post-synaptic density participate in neuronal communication by intimately scaffolding neurotransmitter receptors with their signal transduction systems1. Furthermore, lasting changes in the strength of synaptic efficacy are controlled by the addition or removal of receptors at the post-synaptic density1-6. Therefore, the isolation and quantification of synaptic proteins is a necessary and useful technique to gain insight into the ways that neurons respond to stimuli and alter synaptic efficacy7. This article describes a common technique to isolate synaptic proteins from rodent brain tissue by ultracentrifugation on discontinuous sucrose gradients. The synaptic plasma membrane fraction can be enriched and isolated based on its density in sucrose, which has been empirically determined to be similar to 1.2 M sucrose.

When this process was first described in the 1960’s9,10, electron microscopy was used to demonstrate the organelles and membranes that roughly define the synaptic plasma membrane and post-synaptic density fractions9-14. These studies demonstrated the inclusion of pre- and post-synaptic membranes and synaptic vesicles in the SPM fraction; after detergent treatment primarily the electron-dense, post-synaptic densities were visible. In the procedure, a hypotonic shock is used to pinch off the synaptic processes from the cell body10. This step takes advantage of the fact that mitochondria are more resistant to osmotic shock and remain intact, and so they sediment at the bottom of the sucrose gradient (Figure 1).

Using this same enrichment technique, the SPM and PSD fractions were first biochemically defined by polyacrylamide gel electrophoresis and sequencing of the major protein components15-17. Subsequently western blot analysis has been used to detect and quantify the levels of synaptic proteins and further define these fractions (Figure 2). We have used this technique in our laboratories to quantify changes in the synaptic levels of the dopamine transporter that occur when the Slc6a3 locus is duplicated in mice18. We have also used this technique in NMDA receptor deficient mice to uncover synapse-specific reductions in proteins that are part of the DISC1 interactome19.

It is evident from western blot analysis that SPM fractions contain synaptic vesicle membrane proteins, endosome markers, mitochondrial proteins, membrane associated synthetic enzymes and signal transduction molecules, as well as integral components of the post-synaptic density and synaptic plasma membranes20-23. Even PSD fractions can have contamination with abundant mitochondrial proteins and it may be necessary to perform a second gradient sedimentation or additional purification steps to remove them13. Recently, quantitative mass spectrometry has provided a list of over 100 proteins in the post-synaptic density alone, as well as an indication of the relative abundance of these components24,25.

The following protocol conforms to the guidelines of the Canadian Council of Animal Care and has been approved by the Faculty of Medicine and Pharmacy Animal Care Committee at the University of Toronto.

2. Dissection of the Appropriate Brain Region

8. Preparation of the Discontinuous Sucrose Gradient

Following the centrifugation, there should be clear bands of protein fractions at each interphase (0.32/0.8, 0.8/1.0, 1.0/1.2). In addition a pellet should be visible at the bottom of the tube. See Figure 3C for an example of the fraction bands after ultracentrifugation. If fractions are only diffusely present at the interphase, it is likely that the gradient was compromised and further processing is not advised.

Western blotting of total, SPM and PSD1T protein samples from mouse striatum is demonstrated in Figure 2. The enrichment of synaptic proteins like GluR1, PSD95, and CaMKII, can be visualized by loading a constant amount of protein (10 μg) from total, SPM, and PSD fractions. Perisynaptic proteins like the dopamine transporter (DAT) are enriched in the SPM fraction, but are eliminated in subsequent detergent steps of the PSD enrichment process.

To ensure equivalent loading, protein levels can be visualized on the western blot membrane by staining with Ponceau Red26. Antibody-based “loading controls” are often reported in the literature, but this may be a misnomer since synaptic proteins may be differentially regulated in experimental treatment groups. If an antibody-based “loading control” is desired, it is advisable to first determine equivalent protein loading by Ponceau staining, and then test several reference proteins to identify those that do not change in the different experimental groups. 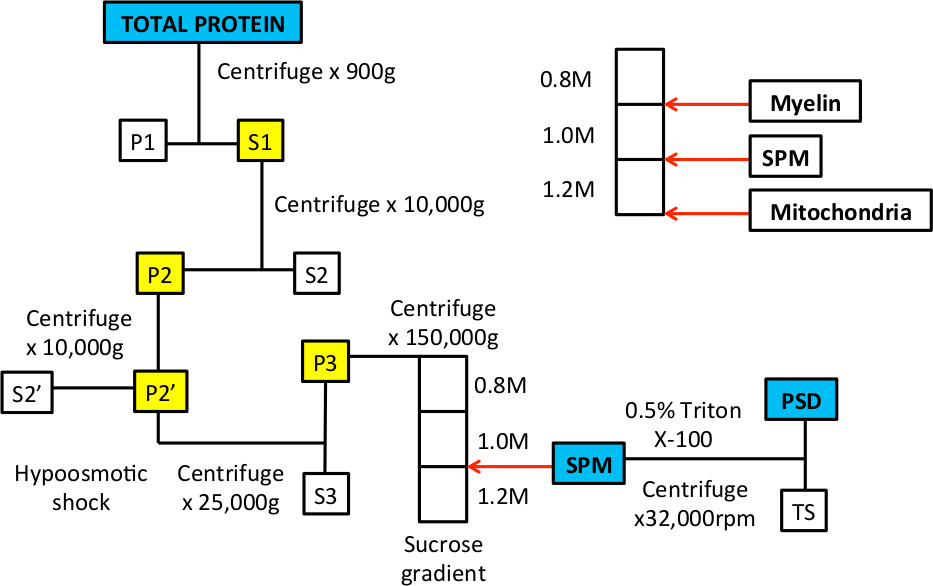 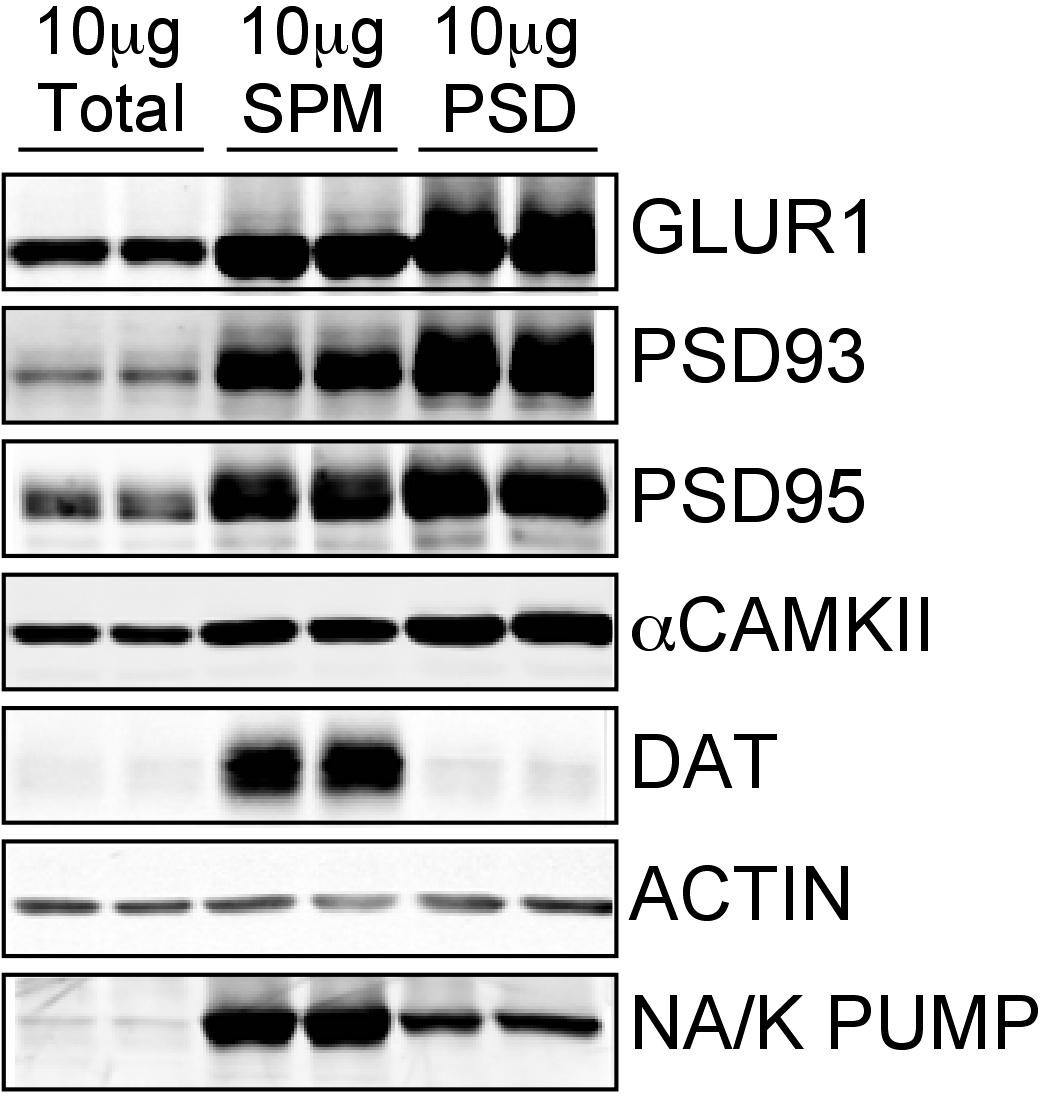 Figure 2. Representative western blot of total, SPM, and PSD1T protein from mouse striatum. 10 μg of protein extract were resolved on SDS-denaturing, 10% acrylamide gels, and transferred to PVDF membranes. Subsequently these blots were incubated with primary antibodies for αCaMKII, GluR1, PSD-93, and PSD-95, which are all components of the post-synaptic density. Accordingly, these proteins are enriched in the SPM and PSD fractions. Alternately, blots were incubated with a primary antibody for DAT, which is located in presynaptic membranes in the striatum. While DAT is enriched in the SPM fraction, it is not part of the PSD complex, and immunoreactivity is not observed in the PSD fraction. Antibodies against actin or sodium/potassium ATPase (Na/K pump) can be used as loading controls, although some experimental conditions may affect the levels of these proteins as well and so the appropriate loading control must be determined empirically. 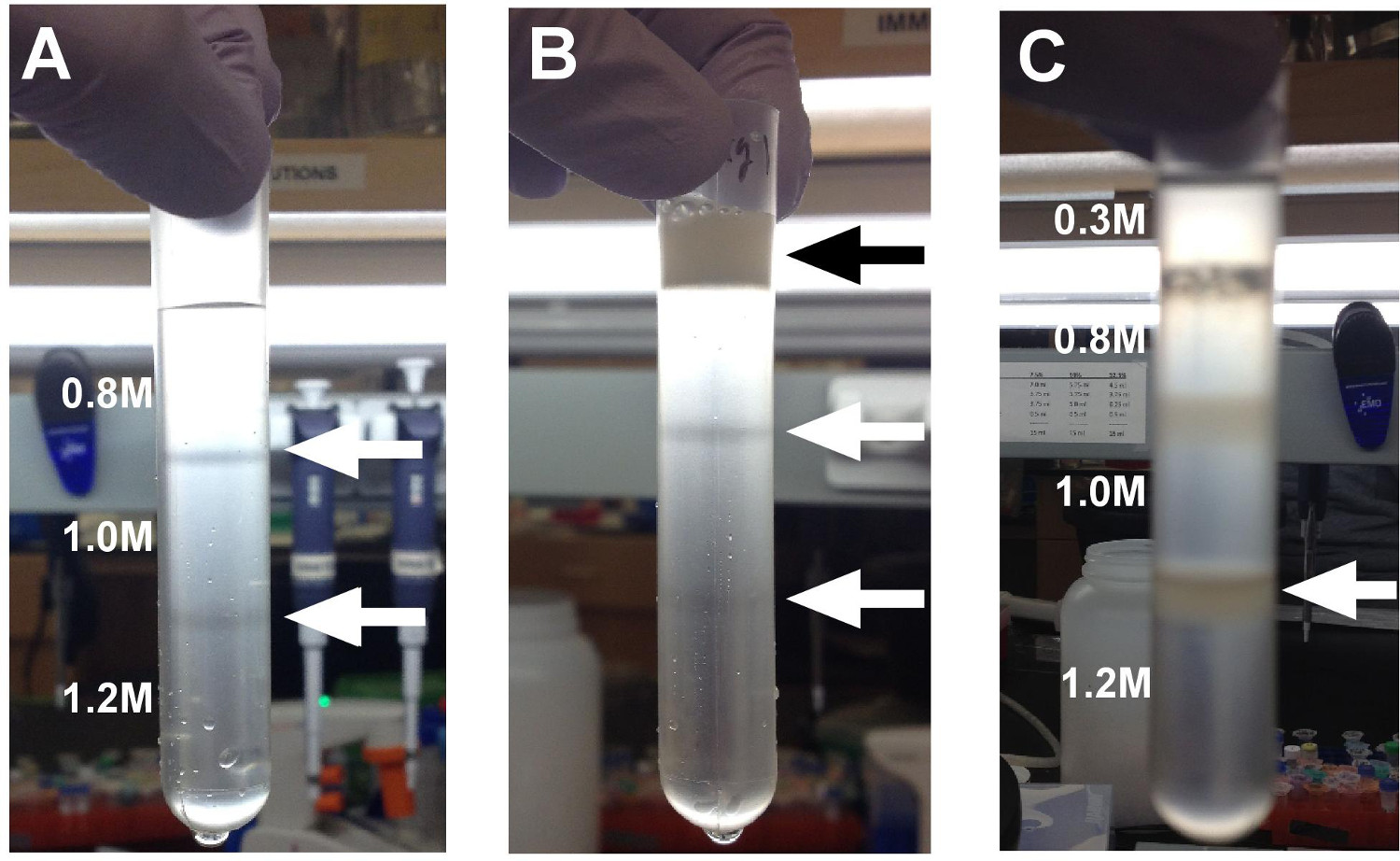 There are several steps in the procedure that are critical for a successful outcome. In step 3, it is important that a consistent degree of homogenization is achieved for each sample. When homogenizing tissue with the motor driven homogenizer, a constant speed is used not only for the rotation of the pestle, but also with the number of strokes. The incubation time during the osmotic shock should be precise, since extended homogenization or incubation in the hypotonic solution will lyse mitochondria and contaminate the SPM sample.

It is important to limit the amount of time between when the gradient is assembled and when the tubes are centrifuged. Normal diffusion will destroy the gradient over time, and this is accelerated if there is vibration on the bench where the gradient is stored. Pre-pipetting of solutions into individual aliquots allows for precise volumes to be pipetted with a glass Pasteur pipet. This also decreases the time between gradient assembly and ultracentrifugation. Troubleshooting tip: build a “test gradient” with bromophenol blue dye as described above at the same time as the sucrose gradients for the experiment. The integrity of the gradient can thus be monitored over time. The test gradient will serve as an indicator of diffusion if the gradients are assembled too far in advance or are exposed to vibration.

Finally, it is important to collect the SPM sample in as small a volume as possible, since it is necessary to subsequently dilute the sample with 2.5 volumes of water. Ideally the sample should be collected in a volume of 0.4-0.7 ml using a 1 cc syringe. It is advisable to build the discontinuous gradients during the final 20 min spin in step 7 to limit time between gradient assembly and ultracentrifugation.

The protocol includes the recommendation to reserve all of the different fractions and store these at -80 °C for subsequent analysis. We have demonstrated the enrichment of post-synaptic proteins in Figure 2 in only a few of these fractions. However, it is advisable to measure the levels of a protein-of-interest in each of the fractions to understand its distribution. Comparing the distribution of a protein in the fractions with other subcellular marker proteins will also help to confirm that the experimental conditions have achieved the desired fractionation. Table 2 summarizes commonly-used protein markers that can be used as indicators for the stages of fractionation8,27-38.

Utilization of the discontinuous sucrose gradient is widely used to enrich synaptic plasma membranes. This method has the advantage over continuous Percoll gradients in that discontinuous sucrose gradients are easier to make and do not require specialized equipment. However, this method may not be sufficient to precisely localize a protein of interest, and for these applications a Percoll gradient may be preferred.

The authors thank Dr. Mike Ehlers and his laboratory members for originally demonstrating the protocol for subcellular fractionation of synaptic plasma membranes. We also thank Wendy Horsfall for management of the mouse colonies. This work was supported by operating grants from CIHR (AJR and AS).