Strategies for attenuating decline in balance function with increasing age are predominantly focused on physical therapies including balance tasks and exercise. However, these approaches do not address the underlying causes of balance decline. Using mice, the impact of near infrared light (NIr) on the metabolism of cells in the vestibular sensory epithelium was assessed. Data collected shows that this simple and safe intervention may protect these vulnerable cells from the deleterious effects of natural aging. mRNA was extracted from the isolated peripheral vestibular sensory epithelium (crista ampullaris and utricular macula) and subsequently transcribed into a cDNA library. This library was then probed for the expression of ubiquitous antioxidant (SOD-1). Antioxidant gene expression was then used to quantify cellular metabolism. Using transcranial delivery of NIr in young (4 weeks) and older (8 - 9 months) mice, and a brief treatment regime (90 sec/day for 5 days), this work suggests NIr alone may be sufficient to improve mitochondrial function in the vestibular sensory epithelium. Since there are currently no available, affordable, non-invasive methods of therapy to improve vestibular hair cell function, the application of external NIr radiation provides a potential strategy to counteract the impact of aging on cellular metabolism inthe vestibular sensory epithelium.

Declining balance performance and subsequent falls are common, and unfortunately often defining features of natural aging1. The impact of this decline can be both physical and social, and significantly reduces quality of life for older people. In response, physical therapies and rehabilitation have been the focus of research into falls but have not been associated with consistent reduction in the prevalence of repeated falls. At the same time, work investigating changes in the peripheral or central vestibular system (the system responsible for maintain balance) is scarce, and potential therapeutic strategies targeting these systems and the underlying causes of imbalance limited.

Recent work on age-associated neurodegenerative disorders including age-related macular degeneration2-4, Alzheimer’s disease models5-8, and Parkinson’s disease9-12 have shown neuroprotective effects of simple non-invasive application of near infrared (NIr) light. Further, in the vestibular system, NIr has been used to increase the activity of vestibular primary afferent neurons in vitro13. While the mechanism of NIr light is not well-understood, most studies using NIr have suggested that NIr stimulates mitochondria complex IV (cytochrome c oxidase)14-17 to facilitate cellular metabolism. In the vestibular sensory epithelium the subcuticular plate of type I hair cells is dense in mitochondria18 and as such may represent a site of action for therapeutic NIr treatment.

Ethics Statement: All procedures outlined below were approved by the University of Sydney Animal Ethics Committee.

NOTE: 1 and 8 - 9 month old mice (C57/BL6) were obtained from the Animal Resources Centre (Perth, Australia). Mice were housed in the Bosch Rodent Facility at the University of Sydney. 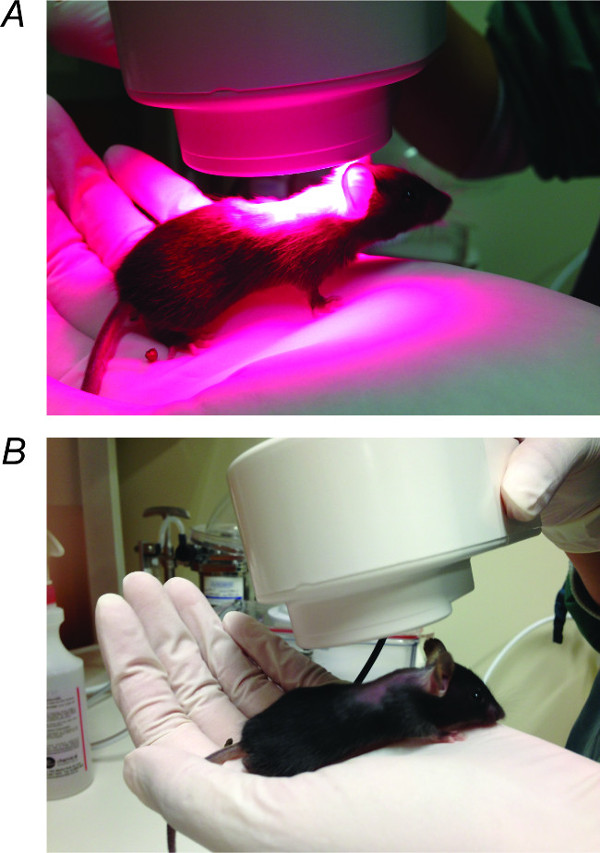 Figure 1. NIr Treatment. (A) NIr LED device held 1 - 2 cm above the shaved region on the head of the mouse for 90 sec per day for 5 consecutive days in irradiation treated mice. (B) NIr LED device held above sham-treated mice in the same way but with the device turned off for the duration of 90 sec. Please click here to view a larger version of this figure. 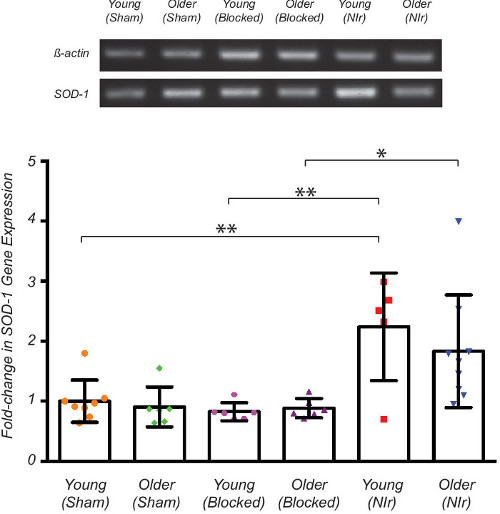 The representative results described here show that brief transcranial delivery of NIr light (90 sec/day for 5 days) is sufficient to raise the levels of antioxidant expression in older mice when compared with sham-treated mice. While emitted heat could represent a source of mitochondrial and/or neuronal activation, as reported for rat vestibular afferents24 – our measurement of heat emitted by the NIr LED device was <0.2°C over 90 sec, and as such is unlikely to cause the changes described here. Further, unlike the report highlighted above, the NIr treatment used here was not applied directly to the sensory epithelium or vestibular afferent neurons, and as such is also unlikely to impact on thermo sensitive channels (e.g., TRPV4). Finally, previous work using the same NIr device in other brain regions have suggested that heat was not the source of observed differences7,9.

While these results show an up-regulation of cellular responses to age-associated oxidative stress on the genetic level, it is not clear whether these changes are further expressed at the protein level, or importantly, whether they are reflected in the overall balance performance of mice. In addition, the up-regulation is shown for a single ubiquitous anti-oxidant. It is likely that multiple markers of cellular metabolism are affected by this treatment regime. Further, since mRNA was extracted from the vestibular apparatus in toto (i.e., hair cells, supporting cells, vestibular afferents and epithelium all present) it is not possible to relate observed changes in cellular metabolism in response to NIr light treatment to a specific vestibular hair cell or primary afferent type. Importantly though, using the described preparation sufficient mRNA can be extracted from a single mouse to allow future correlative studies between cellular metabolism and behavioural analysis of balance performance.

The high intensity LED device used here emits approximately 5 J/cm2 per 90 sec treatment- totalling 25 J of energy over 5 days. While the advantage of the use of long wavelength light (including NIr) is penetrance, it cannot be assumed that the full 25 J of NIr light is delivered to the vestibular sensory epithelium. In the mouse, light must penetrate at least 1 mm through layers of soft tissue and bone that protect the peripheral vestibular apparatus and the brain. In humans this extends to centimetres. Thus the penetrance of light represents a limitation of the described technique in regards to translation of NIr light treatment strategies into the clinical setting. Recent work however has employed optical fibres to deliver NIr light to deep brain structures including the basal ganglia25, and sensory organs including the cochlea26. Based on this and the location of the peripheral vestibular apparatus adjacent to the cochlea (and clinical access to it via the mastoid process), it is feasible to suggest that in the human, direct stimulation of the vestibular sensory epithelium could be achieved through a small optical fibre triggered by an external device – akin to a cochlea implant27.

Several conditions can be modified in the protocol described above to adapt to the interest of the investigator. First, the wavelength used here (670 nm) can be extended to include longer wavelengths in the infrared range as previously reported in other sensory systems and animal models. Second, treatment regimes can also be varied depending on whether short-term or long-term response is in question. Here a very brief treatment regime was utilized, but this could be extended to longer durations, or even shorter durations to measure the dynamics of NIr induced changes.

The main challenge of this protocol is to maintain the viability of the tissue during tissue extraction. Given the time required to remove the bony labyrinth and excise the membranous labyrinth from it, it is critical to reduce metabolic breakdown. This is achieved by bathing the tissue in ice-cold ACSF throughout the entire procedure and perfusing this solution continuously with carbogen. In addition, at the end of the dissection procedure, further tissue degradation can be halted with the use of liquid nitrogen to flash freeze the extracted tissue. When appropriate, the frozen tissue can be thawed and mRNA extracted for further gene analysis.

Although the methods described here do not describe the complete impact of NIr light treatment on cellular metabolism in the vestibular sensory epithelium, further application of this strategy can be modified to include other age-associated markers of mitochondrial function28,29 and/ or cellular metabolic insults such as hypoxia30. Ultimately, the ability to describe the vestibular cellular metabolic profile of an individual mouse will allow the investigation of the correlations between balance performance and subcellular processes during ageing, and the impact of therapeutics including NIr treatment.

The authors declare they have no competing financial interests.

The authors wish to acknowledge Dr. Paul Witting and Ms. Genevieve Fong for their assistance with mRNA extraction and PCR, and the Garnett Passe and Rodney Williams Memorial Foundation for support.