Treatment of the “sick sinus syndrome” is based on artificial pacemakers. These bear hazards such as battery failure and infections. Moreover, they lack hormone responsiveness and the overall procedure is cost-intensive. “Biological pacemakers” generated from PSCs may become an alternative, yet the typical content of pacemaker cells in Embryoid Bodies (EBs) is extremely low. The described protocol combines “forward programming” of murine PSCs via the sinus node inducer TBX3 with Myh6-promoter based antibiotic selection. This yields cardiomyocyte aggregates consistent of >80% physiologically functional pacemaker cells. These “induced-sinoatrial-bodies” (“iSABs”) are spontaneously contracting at yet unreached frequencies (400-500 bpm) corresponding to nodal cells isolated from mouse hearts and are able to pace murine myocardium ex vivo. Using the described protocol highly pure sinus nodal single cells can be generated which e.g. can be used for in vitro drug testing. Furthermore, the iSABs generated according to this protocol may become a crucial step towards heart tissue engineering.

The term “sick sinus syndrome” summarizes multiple diseases leading to the deterioration of the cardiac pacemaker system. It comprises pathological, symptomatic sinus bradycardia, sinoatrial block, sinus arrest as well as the tachycardia-bradycardia syndrome. Thereby, a “sick sinus syndrome” is often accompanied by general cardiac diseases such as an ischemic heart disease, cardiomyopathies or myocarditis. At present, therapeutic approaches are based on the implantation of electrical pacemakers. However, this goes along with a number of risks such as infections and battery failure. Overall, the incidence of complications is still very high in patients having implanted an artificial pacemaker. Furthermore, as opposed to the endogenous pacemaker, these devices do not respond to hormone stimulation.

A future alternative may rely on the availability of “biological pacemakers” for which PSCs could serve as a suitable cellular source and which would also be highly valuable for in vitro drug testing. Yet, a major problem lies in the very rare appearance of sinus nodal cells within embryoid bodies (EBs) - this typically does not exceed ~0.5%1.

Previously, it was shown that “forward programming” towards specific cardiomyocyte subtypes is feasible via overexpression of distinct early cardiovascular transcription factors such as Mesoderm-specific-posterior 1 (MesP1) and NK2 transcription factor related, locus 5 (Nkx2.5)2,3. For normal size and function of the sinoatrial node (SAN), the T-box transcription factor Tbx3 is crucial, which has been shown to initiate the pacemaker gene program and to control differentiation of the SAN4. While this enhanced the appearance of functional pacemaker cells, the content still did not exceed ~40% within the entire cardiomyocytic cell population.

Therefore, an additional Myh6-promoter based antibiotic selection step5 was introduced by us. This ultimately leads to yet unobserved cardiomyocyte aggregates (“induced sino-atrial bodies; “iSABs”) which exhibit highly increased beating frequencies (>400 bpm) in vitro, for the first time approximating those of a murine heart and comparable to in vitro cultivated sinus nodal cells isolated from a murine heart6. Under Isoprenaline administration even beating frequencies of 550 bpm are achieved. Notably, iSABs consist of over 80% functional nodal cells as evident from extensive physiological analyses7. Recently, several approaches to generate sinus nodal cells using direct reprogramming19, surface markers14 or pharmacological treatment with small molecules16,17 were described. Yet, none of these methods led to such a high purity of pacemaker cells and beating frequencies close to the murine heart as observed in iSABs.

Moreover, in an ex vivo model of cultivated adult mouse ventricular slices which have lost their spontaneous beating activity, the iSABs are capable of integrating into the slice tissue, thereby remaining spontaneously active and robustly pacing the heart slices to contractions7. A detailed protocol for the generation of these iSABs is described in this paper.

The described protocol allows generation of iSABs with a beating frequency of around 450 bpm from PSCs (shown in the movie) which is near to the mouse heart beating frequency. After dissociation of iSABs (step 2.8.8) the observed single cells show the typical shape of cells of the sinus node (spindle and spider cells) as shown in Figure 1. These cells highly express proteins which are known to be essential for the function of the sinus node like hyperpolarization-activated cyclic nucleotide-gated cation channel 4 (Hcn4), Connexin45 (Cx45), Connexin30.2 (Cx30.2) and Myh6 (Figure 2A-C). After treatment of iSAB derived cells with pharmaceuticals, the cells show the expected behavior: like in the sinus node, the funny channel blocker ZD7288 (Figure 3A) as well as the muscarinic receptor agonist carbachol (Figure 3B), both cause a significantly reduced beating frequency of iSAB derived cells. The β-adrenoreceptor agonist isoprenaline leads to an elevated beating frequency (Figure 3C). 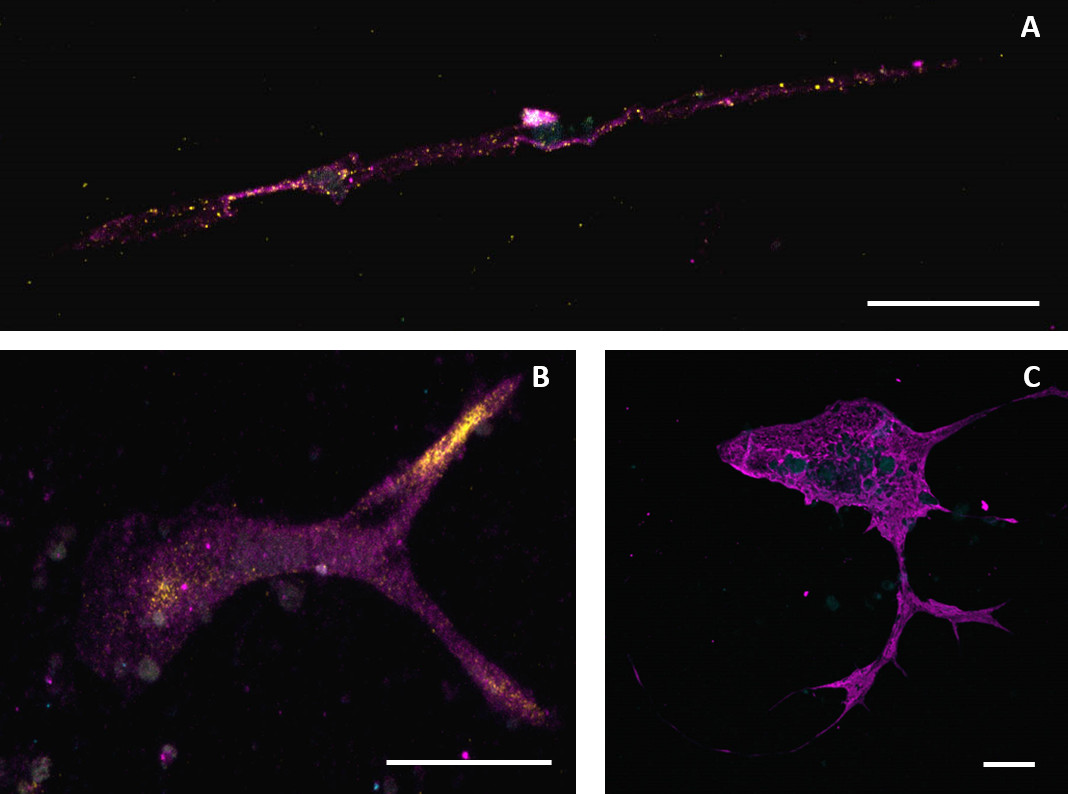 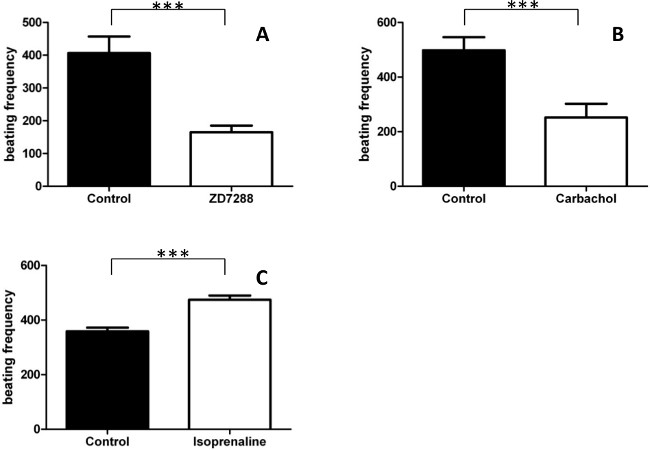 Figure 3: Pharmacological treatmentof iSABs Representative beating frequency of iSABs before (control) and after treatment with ZD7288 (A), Carbachol (B) and Isoprenaline (C). The data represent eight independent iSABs and are presented as mean ± SD. *** p <0.001

The ability to produce stem cell derived cardiac pacemaker cells may allow reconstitution of the proper cardiac rhythm in the sense of “biological pacemakers”. Likewise, drug testing in vitro will benefit from their availability. PSCs can give rise to any cell type of the mammalian body including cardiomyocytes with pacemaker cell properties8,9,10,11,12,13. However, typically the cell populations within “Embryoid Bodies” are highly heterogeneous, which inevitably leads to the requirement of reliable selection and isolation strategies – this applies in particular to the very rare cell type of cardiac nodal cells. Numerous approaches based on exogenous and endogenous surface markers14, on pharmacological administration of small molecules15,16,17 and on direct reprogramming strategies18,19 have been followed. In addition, non-stem-cell-based approaches aimed at emulating biological pacemakers via manipulation of terminal effector molecules underlying sarcolemmal electrophysiology instead of de novo generating fully functional nodal cells20,21.

Yet, neither of these came up with the necessary high spontaneous contraction frequencies and cellular purity. In contrast, our protocol leads to cells that do not only exhibit electrical oscillations but also the subtle electrophysiological and calcium signaling characteristics as well as distinctive morphological features of endogenous pacemaker cells7. This technology may become an important prerequisite for alternatives to electronic pacing devices.

Although this protocol was optimized during its development, there are still some steps that may cause problems: The starting point for the selection of iSAB is critical of the protocol. Beating of the cells is an indicator for αMHC-Expression in differentiating cells. Myh6-Expression goes along with expression of the G418 resistance gene. Starting the selection too early will extinguish a lot of the cells which potentially would differentiate into cardiomyocytes and will therefore decrease the overall yield of sinus nodal cells. Another critical step is the dissociation of the cell layer (step 2.8). The reason for this is that the cells form a robust extracellular matrix and a strong force is necessary to dissociate the cell layer. If necessary, step 2.8.4 should be repeated till small clusters of cells have developed from the cell layer. Avoid direct dissociation of the cell layer by e.g. trypsin because it turned out to be of very low efficiency.

For future clinical applications, the following obstacles still need to be addressed: transference of the approach to the generation of human iSABs which may become a crucial step towards future cell therapy and in vitro drug-testing. Also, the technique is still based on stable genetic modifications of PSCs and therefore will need to be modified before it can be applied to patients.