While high resolution melting analysis offers the ability to differentiate between single nucleotide polymorphisms in a heterogeneous population, mutant allele amplification bias can increase its ability to detect alleles present at relatively low percentages within a sample. This protocol describes improvements that improve the sensitivity of high resolution melting analysis.

Despite decades of eradication efforts, malaria remains a global burden. Recent renewed interest in regional elimination and global eradication has been accompanied by increased genomic information about Plasmodium parasite species responsible for malaria, including characteristics of geographical populations as well as variations associated with reduced susceptibility to anti-malarial drugs.

One common genetic variation, single-nucleotide polymorphisms (SNPs), offers attractive targets for parasite genotyping. These markers are useful not only for tracking drug resistance markers but also for tracking parasite populations using markers not under drug or other selective pressures.

While informative SNPs have been identified that are agnostic to specific genotyping technologies, high-resolution melting (HRM) analysis is particularly suited to field-based studies. Compared to standard fluorescent-probe based methods that require individual SNPs in a single labeled probe and offer at best 10% sensitivity to detect SNPs in samples that contain multiple genomes (polygenomic), HRM offers 2-5% sensitivity. Modifications to HRM, such as blocked probes and asymmetric primer concentrations as well as optimization of amplification annealing temperatures to bias PCR towards amplification of the minor allele, further increase the sensitivity of HRM. While the sensitivity improvement depends on the specific assay, we have increased detection sensitivities to less than 1% of the minor allele.

Despite renewed interest in malaria control and eradication, malaria remains a worldwide burden, with nearly half of the world’s population at risk of infection and more than 550,000 deaths annually, particularly children in sub-Saharan Africa1.

These new control and eradication programs have been supported by the genomic renaissance, with large numbers of malaria parasites sequenced and analyzed for mutations associated with reduced drug sensitivity, increased virulence, and for population characteristics2,3. Single-nucleotide polymorphisms (SNPs) are among the most commonly identified genetic variants 4-7.

While this set of informative SNPs is easily adapted to many genotyping platforms, high resolution melting (HRM) analysis is particularly well-suited to field-based studies, where sensitive and simple operation and detection of novel mutations at low costs compared to sequencing and other approaches are attractive in resource-poor settings.

Several refinements to this method offer better genotyping resolution to differentiate SNPs including class IV (A-T) SNPs, and detect minor mutant alleles in samples with multiple alleles present (polygenomic infections). First, the assays incorporate short probes centered over the SNP region in addition to forward and reverse primers that are present at different concentrations. These blocked probes are not amplified during PCR, but bind to the strand produced in excess due to asymmetric primer concentrations that increase production of the probe-template product. These separate double-stranded amplicons consisting of probe bound to the excess template strand are ~20-30 bp; their significantly decreased length compared to the entire amplicon (80-150 bp) lead to much larger Tm differences associated with single or multiple base probe-template mismatches10.

With these HRM refinements, this technology has allowed tracking of origins and identity of parasites associated with epidemic infections in South America11 and detection of new mutations, differentiation of multiple SNPs located immediately next to each other in sequence, and mutations present in less than 1% of the alleles in polygenomic samples10.

Increased sensitivity is particularly important in regions approaching pre-elimination status and those at risk for emerging drug resistance. The ability to quickly and easily identify imported parasites and SNPs associated with reduced sensitivity on-site informs surveillance efforts and control programs about the effectiveness of their implementations and identifies hotspots for increased malaria eradication and elimination efforts. This protocol describes the methods for blocked-probe-based and MAAB for increased HRM genotyping sensitivity.

Note: This protocol includes volumes and concentrations for 96-well plate, 8-tube strips, and capillary-based systems (10 µl reaction volume); however, HRM can also be performed in 384-well plate-based systems with a 5 µl reaction volume by scaling all volumes correspondingly. The range of detection for most systems is 10 pg to 10 ng template DNA.

Data can be visualized in several different ways, depending on the analysis software and instrument. Typically, a plot of the negative derivative of normalized fluorescence with respect to temperature (–dF/dT) against temperature results is most straightforward for visualizing melting peaks and determining genotypes.

A full melting window (40°C–80°C) will result in both amplicon and probe melting regions. Figure 1 shows an example of normalized melting peaks for both regions. Setting the analysis window to just the probe region results in clear differentiation of peaks corresponding to specific SNPs (Figure 2).

Figure 4 shows that progressively reducing the annealing temperature during amplification (MAAB) results in a bias towards the mutant allele (left-side peak) (Figure 4A), resulting in increased sensitivity for the mutant allele in a population of mixed alleles (Figure 4B).

Figure 1. Probe and amplicon melting regions. Plotting the negative derivative of the normalized fluorescence with respect to temperature over a wide melting window results in both probe (lower temperature) and amplicon melting peaks that can be analyzed. (Adapted from Daniels et al. DOI: 10.1128/AAC.05737-11) Please click here to view a larger version of this figure.

Figure 3. Polygenomic melting peaks. When both alleles are present in a sample, probe-based HRM analysis represents both alleles as two-peak curves (orange) with peaks that match single-allele samples (red and grey). (Adapted from Daniels et al. DOI: 10.1128/AAC.05737-11) Please click here to view a larger version of this figure. 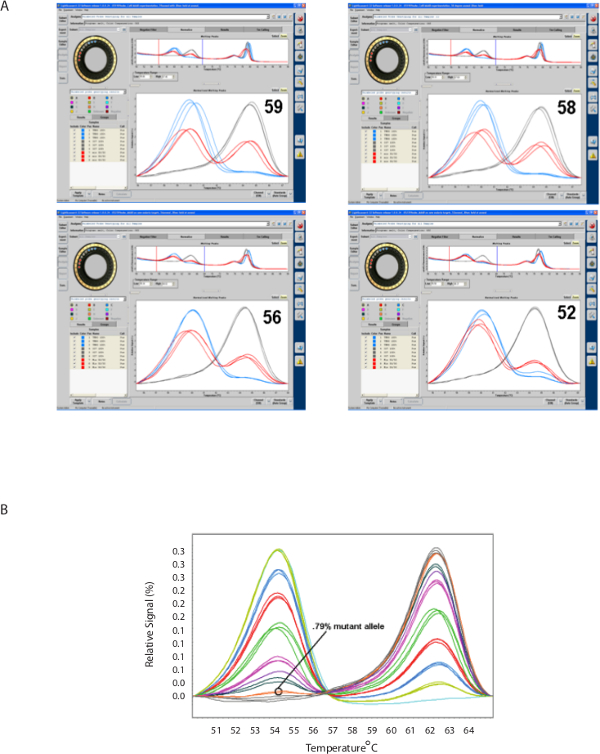 Figure 4. Mutant allele amplification bias (MAAB). A. Progressively lowering the amplification annealing temperature biases the melting peak reaction towards peak corresponding to the mutant (lower temperature) allele in a polygenomic or polyallelic sample. B. MAAB results in HRM sensitivity to detect minor alleles present at less than 1% in polygenomic or polyallelic samples. (Part B adapted from Daniels et al. DOI: 10.1128/AAC.05737-11) Please click here to view a larger version of this figure.

Continous HRM is a post-PCR analysis step; therefore, sample and assay setup is similar to standard PCR protocols, with the additional incorporation of a fluorescent intercalating dye used to track the transition from double-stranded to single-stranded DNA during the high-resolution melting step. The single most important factor for successful HRM analysis is a robust PCR product. Assay design is key, and several tools optimized for HRM assay design are available commercially and online13. Amplicon lengths of 80-150 base pairs with accompanying ~20 base pair blocked probes centered over the SNP or SNPs of interest work best to differentiate SNPs as well as haplotypes of multiple SNPs within the probe region. Probes can be blocked using either a 3’ C3 spacer or a 2 base pair mismatch at the 3’ end, which prevent extension during amplification. Probes can be designed to match the Watson or Crick template strand; the choice depends on empirical testing to determine which probe design produces acceptable melting peaks. Excess forward or reverse primers are used to produce single-stranded amplification product that anneals to the blocked probes. If the probe contains the forward strand sequence, then reverse primer is used in excess, typically in a 1:5 ratio, and vice-versa for probes that match the reverse strand.

Only a handful of instruments are compatible with MAAB. The thermal properties of the glass capillaries tubes used in these systems facilitate this method. The small interior diameter of the capillaries as well as the rapid heat transfer through glass offer more stringent temperature control than standard PCR plasticware, which has slower transition rates between annealing and denaturation cycles due to the thermal insulating properties of the plastics. With this method, detection sensitivities can be reduced from 2-5% to less than 1% of a mutant allele in a mixture of wild-type and mutant alleles10.

HRM is a facile, efficient, and economical tool for SNP genotyping in a variety of settings and numerous applications, from infectious disease surveillance to scanning for cancer gene variants. Several other instruments, such as the Roche Nano and LightCycler systems (480 and 96) as well as the Eco Real-time PCR system offer HRM in addition to standard amplification, real-time, and copy-number functionality. Using higher-throughput machines, HRM barcoding costs less than $0.50 per assay in our hands, including all reagents and consumables.

The authors thank the Bill and Melinda Gates Foundation for its support of technology development and training.