The fabrication protocol of a dipole-assisted solid phase extraction microchip for the trace metal analysis is presented.

This paper describes a fabrication protocol for a dipole-assisted solid phase extraction (SPE) microchip available for trace metal analysis in water samples. A brief overview of the evolution of chip-based SPE techniques is provided. This is followed by an introduction to specific polymeric materials and their role in SPE. To develop an innovative dipole-assisted SPE technique, a chlorine (Cl)-containing SPE functionality was implanted into a poly(methyl methacrylate) (PMMA) microchip. Herein, diverse analytical techniques including contact angle analysis, Raman spectroscopic analysis, and laser ablation-inductively coupled plasma-mass spectrometry (LA-ICP-MS) analysis were employed to validate the utility of the implantation protocol of the C-Cl moieties on the PMMA. The analytical results of the X-ray absorption near-edge structure (XANES) analysis also demonstrated the feasibility of the Cl-containing PMMA used as an extraction medium by virtue of the dipole-ion interactions between the highly electronegative C-Cl moieties and the positively charged metal ions.

From the viewpoints of environmental management and contamination prevention, trace metals which cause serious pollution or toxicological problems are a worldwide concern. An appropriate on-chip sample pretreatment technique has been widely accepted as the key to success in processing and analyzing actual samples via chip-based platforms, because unexpected co-existing chemical species in raw samples often hamper the accurate determination of analytes present in traces amounts.1 Among the available techniques, on-chip solid phase extraction (SPE) is especially popular for trace metal analyses, because this technique permitting sample cleanup and analyte preconcentration to be performed simultaneously is extremely useful for isolation of metal ions from complicated salt matrices.2,3

The advancement of on-chip SPE techniques used for the determination of trace metals has been steadily evolving. In the early days, the SPE chips were prepared by loading commercially available resins into the microchannels to construct the resin-packed SPE units.4-7 This occasionally required the analyte to be derivatized to enable the transformation of metal ions into resin-retainable forms.4 An alternative method for the preparation of chip-based SPE devices is to utilize the chip channel as an SPE sorbent for the collection of trace metals after simple surface modification.8 Recent years have seen an emerging trend involving the incorporation of magnetic nanoparticles (MNPs) and specific chemicals that contain functional groups capable of the efficient retention of metal ions. In contrast to commercial resins, the MNPs are modified with compounds such as γ-mercaptopropyltrimethoxysilane (γ-MPTS)9 and aminobenzyl ethylenediaminetetraacetic acid (ABEDTA)10 after which they are packed into the microchannels with the aid of an external magnetic field to achieve the selective extraction of metal ions.

Although significant progress in the development of on-chip SPE techniques has been witnessed, the reported techniques typically function based on either ion exchange or chelation. The use of techniques such as these has the disadvantage of requiring unavoidable operational procedures, including those associated with conditioning, washing, or regeneration, to maintain the analytical performance. Unfortunately, the need for additional operational procedures not only extends the time required for each analysis but also risks causing high blank values and irreproducible results.11 Therefore, an alternative working strategy for on-chip SPE techniques is imperative for trace metal analyses.

Remarkably, the reliance of the innovative extraction mechanism on the dipole-ion interactions between the highly electronegative C-Cl moieties in the channel interior and the positively charged metal ions makes it possible to avoid measures taken during general on-chip SPE procedures, leading to a dramatic reduction of either the contamination caused by the use of excess reagents or the labor attributed to additional steps. The protocol provided in this contribution will enable researchers from diverse backgrounds to fabricate the dipole-assisted SPE microchip for their work. Detailed characterization procedures for the fabricated microchip are described as well.

Note: Unless otherwise stated, carry out all procedures at ambient temperature in a class 100 laminar flow hood.

1. Fabrication of the Dipole-assisted SPE Microchip

3. Characterization of the Dipole-assisted SPE Reaction

Figure 2 depicts the reaction that occurs during the channel modification procedures of the PMMA microchip. Contact angle analysis was used to monitor the surface changes during the proposed procedures. An LA-ICP-MS system and a dispersive Raman spectrometer were employed to verify the successful modification of the C-Cl moieties formation on the PMMA substrate (Figure 3(a),(b)). The proposed dipole-assisted SPE reaction was characterized by the XANES analysis (Figure 4). 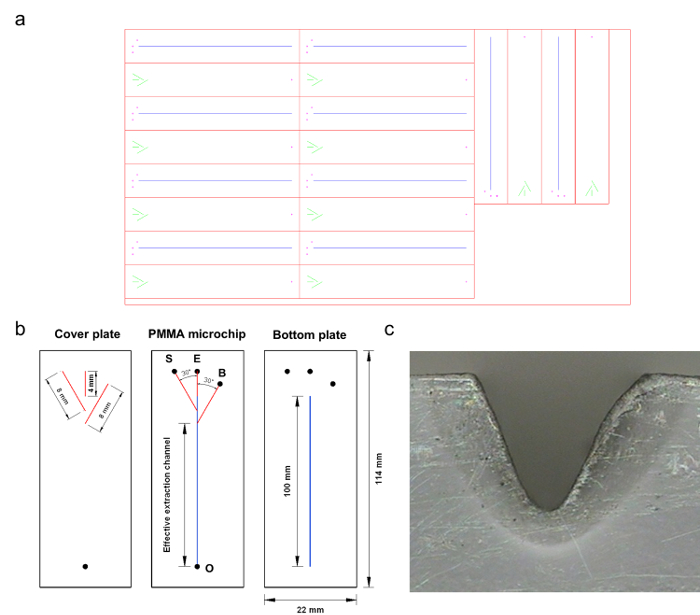 Figure 1. The PMMA microchip. (a) The snapshot of the pattern file for the fabricated microchip. (b) Layout of the fabricated microchip: S, E, and B represent the introduction ports for the sample, eluent, and buffer solutions, respectively; O represents the outlet. The black circle represents the drilled access hole for each. The channels used for the introduction of sample and buffer solutions both formed an angle of 30° with the extraction channel. The length of the effective extraction channel, which was defined as the distance from the convergence point of the flows of the sample and buffer solutions to the confluent outlet, was 94 mm. (c) The photograph of the cross-section of the machined plate. Reproduced from Ref. 16 by permission of The Royal Society of Chemistry. Please click here to view a larger version of this figure.

Figure 2. Scheme of the channel modification for the PMMA microchip. The inset photographs show the contact angle corresponding to the resulting product in sequence. The contact angle was determined by using an image of a water drop. The average of three repeated measurements was used for determining the reported contact angles in each case. Reproduced from Ref. 16 by permission of The Royal Society of Chemistry. Please click here to view a larger version of this figure. 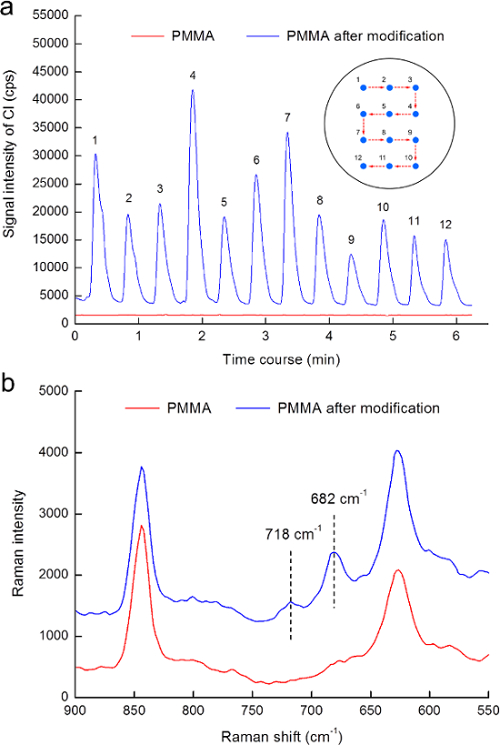 Figure 3. Surface verification of PMMA modification. (a) Signal for Cl obtained by ablating both the PMMA and PMMA modified with the C-Cl moieties. The inset shows the ablation positions corresponding to each obtaining signal. (b) Raman spectra of native and modified PMMA. Reproduced from Ref. 16 by permission of The Royal Society of Chemistry. Please click here to view a larger version of this figure. 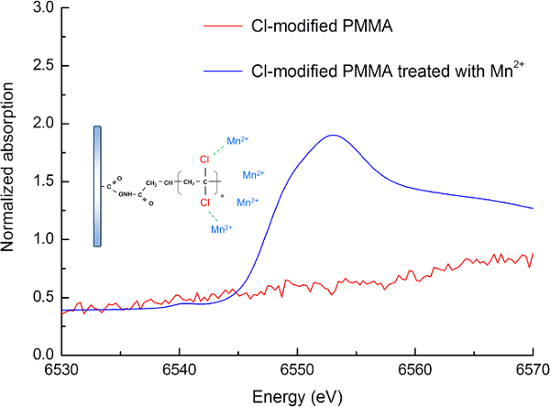 The detailed procedures for the preparation of a dipole-assisted SPE microchip were presented above. In this section, the utility of the modification protocol with regard to the implantation of the C-Cl moieties on the PMMA and the feasibility of the Cl-containing PMMA, which was used as an extraction medium for the determination of trace metal ions, are evaluated step-by-step. For surface verification purposes, the sample type was selected on the basis of its compatibility with the analytical instrumentation. In other words, the types of test samples prepared via a similar process were determined in accordance with the requirements of the analytical instruments. For example, a substrate-type sample was used for the measurement of the contact angle, whereas a powder-packing-type sample was used for the LA-ICP-MS, Raman spectroscopic, and XANES analyses.

Initially, to monitor the change undergone by the chemical functionalities attached to the surface of the PMMA during the proposed procedures, a contact angle analysis for the resulting product corresponding to each step was carried out (Figure 2). As displayed in Figure 2, the variations in the contact angle clearly indicated that surface changes occurred during the modification procedures, and the contact angle of 80.3° ± 0.43° that was measured for the final product was in agreement with previously reported results.21

Moreover, to clarify the extraction mechanism proposed in this study, the XANES analysis was employed. As indicated in Figure 4, the interactions between the highly electronegative C-Cl moieties and the positively charged metal ions could be confirmed by the presence of the dominant absorption edge in the XANES spectrum corresponding to the modified PMMA treated with Mn2+ ions. Thus, the dipole-electrostatic interactions would be indeed applied to on-chip extraction for trace metal analyses. The detailed analytical results for water samples collected from two rivers in Taiwan have been described elsewhere.16

To the best of our knowledge, this is the first attempt to utilize an innovative working strategy in on-chip SPE reaction for the determination of trace metal ions, and that the developed device was significantly durable compared with other on-chip SPE techniques (i.e., more than 160 analytical works could be achieved without significant deterioration in terms of the extraction efficiency). Nevertheless, because such extraction mechanism was mainly relied on the interactions between the highly electronegative C-Cl moieties and the positively charged metal ions, the proposed technique was expected to be unsuited for the extraction of the negatively charged species so far.