Maternal immune activation (MIA) is a model for an environmental risk factor of autism and schizophrenia. The goal of this article is to provide a step-by-step procedure of how to induce MIA in the pregnant mice in order to enhance the reproducibility of this model.

Maternal immune activation (MIA) model is increasingly well appreciated as a rodent model for the environmental risk factor of various psychiatric disorders. Numerous studies have demonstrated that MIA model is able to show face, construct, and predictive validity that are relevant to autism and schizophrenia. To model MIA, investigators often use viral mimic polyinosinic:polycytidylic acid (poly(I:C)) to activate the immune system in pregnant rodents. Generally, the offspring from immune activated dam exhibit behavioral abnormalities and physiological alterations that are associated with autism and schizophrenia. However, poly(I:C) injection with different dosages and at different time points could lead to different outcomes by perturbing brain development at different stages. Here we provide a detailed method of inducing MIA by intraperitoneal (i.p.) injection of 20 mg/kg poly(I:C) at mid-gestational embryonic 12.5 days (E12.5). This method has been shown to induce acute inflammatory response in the maternal-placental-fetal axis, which ultimately results in the brain perturbations and behavioral phenotypes that are associated with autism and schizophrenia.

The concept of maternal immune activation (MIA) originates from the epidemiology studies on the association of maternal infection with autism and schizophrenia1. Due to the absence of detectable replicating viral pathogens in the placenta or the fetal brain after maternal viral infection2,3, the effect of the infection on the offspring is hypothesized to be caused by the activation of the maternal immune system rather than the pathogens themselves.

To elucidate the cause-and-effect relationship between MIA and psychiatric disorders, injection of chemically synthesized, viral mimic double stranded RNA polyinosinic:polycytidylic acid (poly(I:C)) into pregnant rodents has been widely used as the animal model for MIA4,5. Poly(I:C) is recognized by toll-like receptor 3 (TLR3), and systemic administration of poly(I:C) induces viral-like acute inflammatory response. One of the mechanisms by which poly(I:C) produces behavioral abnormalities and neuropathologies in the offspring is by causing an imbalance of pro- and anti- inflammatory cytokines in the maternal-placental-fetal axis6. Several groups have adopted the MIA model to understand the etiology of psychiatric disorders7, and due to the diverse interests among research groups, various time points of immune activation have been used to achieve different perturbations on brain development and behaviors7.

Here, we provide a detailed method of how to induce MIA at E12.5 by poly(I:C), as well as paradigms of how to apply this model to study the etiology of autism and schizophrenia. It is important to note that MIA is a risk factor for a variety of disorders4, and its outcomes are extremely sensitive to the time and method of induction as well as the husbandry of the pregnant dams. As such, even minor inconsistencies between laboratories often result in low reproducibility and/or different phenotypes in the offspring. Our method is specifically designed for those interested in studying MIA as an environmental risk factor for autism and schizophrenia, and the detailed description provided will help researchers improve the reproducibility of their data.

All protocols were performed under the approval of the California Institute of Technology Institutional Animal Care and Use Committee (IACUC). 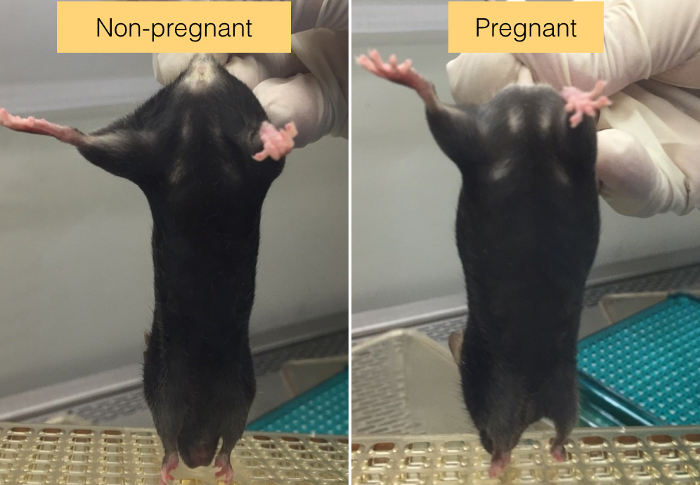 Figure 1. The sign of pregnant mice. Mid-gestation mouse can be identified by the bulge in its abdomen area (Arrow). Inbred C57BL/6 mouse strain is used here as an example.  Please click here to view a larger version of this figure. 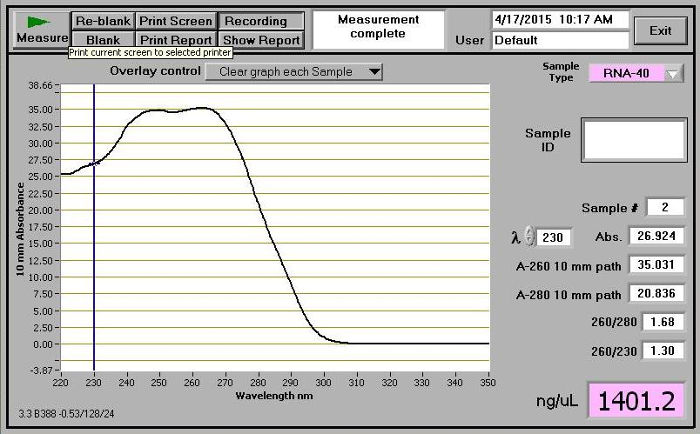 Figure 3. Absorbance measurement of poly(I:C) solution. Make sure the 260/280 ratio is between 1.54-1.82. Please click here to view a larger version of this figure. 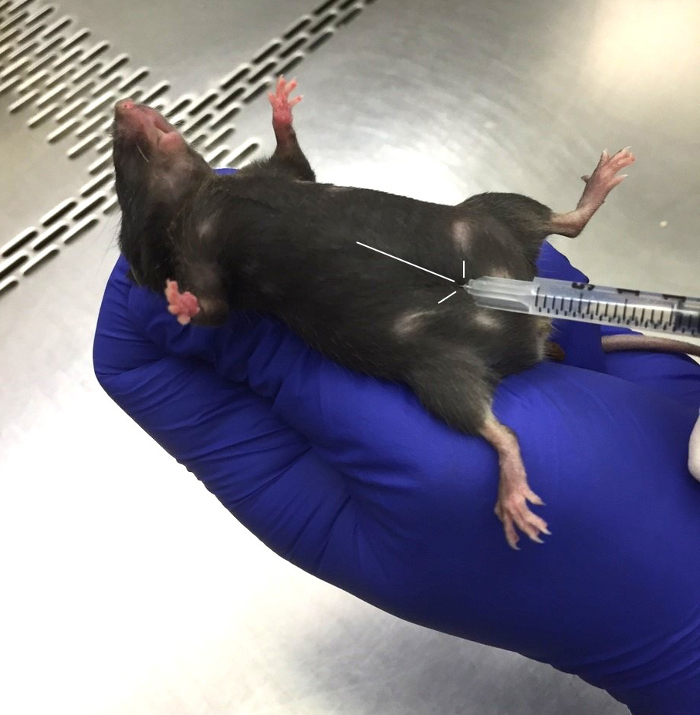 Figure 4. Poly(I:C) injection at embryonic (E) 12.5 days. Scruff the pregnant mouse gently. The injection site is located at the mid-point of the upper nipples. Inject the needle, bevel up, at approximately 20° angle relative to the mouse. Inbred C57BL/6 mouse strain is used here as an example. Please click here to view a larger version of this figure. 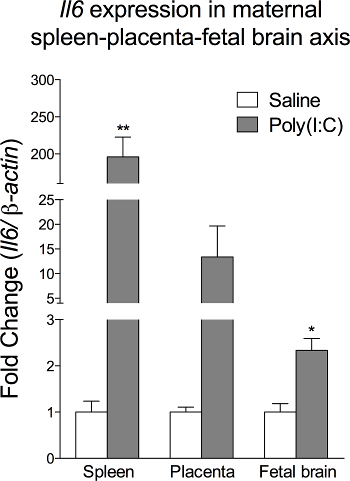 Figure 5. Poly(I:C) injection increases Il6 gene expression in the spleen-placenta-fetal brain axis of the dam. Data are presented as Mean ± SEM. * p <0.05, ** p <0.01 (The data is originally from Wu et al., 2015 and modified for the article13). Please click here to view a larger version of this figure. 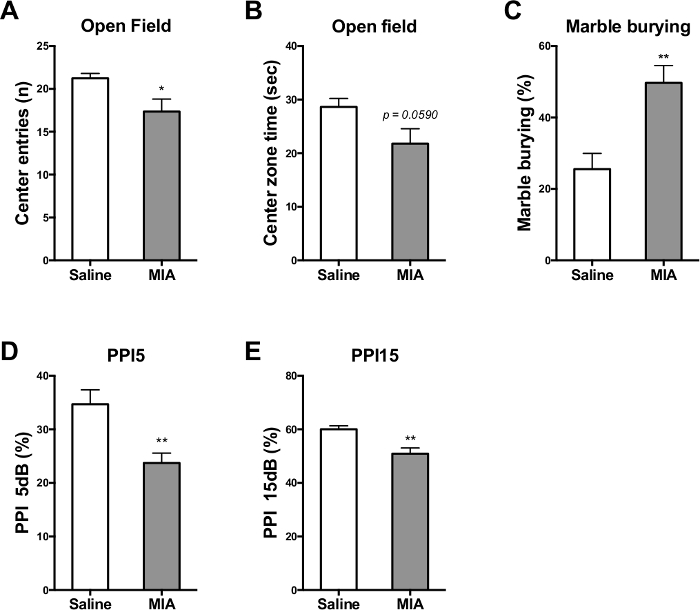 MIA induction at different time windows perturbs different brain development events in rodents, and consequently leads to different behavioral abnormalities and neuropathologies in the offspring. Here, we described a protocol to induce MIA in mice with poly(I:C) injection at E12.5. This method of MIA induction leads to behavioral, neurological, immunological, and gastrointestinal abnormalities associated with autism and schizophrenia in the offspring8,10,11,16. It is important to note that, because MIA is an environmental risk factor, the phenotype of the offspring is expected to have higher variation than that of mice from genetic models of neurodevelopmental disorders. Thus, to accurately and consistently generate autism and schizophrenia-related phenotypes through MIA, it is especially important to minimize additional variables that may confound the results.

The timeline described in the protocol should be followed closely. Correct injection time window would ensure that MIA perturbs the offspring brain development at the desired stage. Induction of MIA at E12.5 in mouse corresponds to perturbations near the end of the first trimester in human gestation21- a period during which significant brain development occurs, including development of Purkinje cells and caudate putamen, and neurogenesis in the cortical layer. Further investigation will be needed to prove the association between the loss of Purkinje cells in MIA cerebellum and the early perturbation of brain development.

While consistent treatment, examination, and even husbandry of the dams would minimize the effect of maternal stress on the offspring phenotype, our protocol still contains caveats that researchers should be aware of. For example, we single house the dams the day before the injection of poly(I:C) and throughout the rest of pregnancy. Our strategy is to leave the pregnant mice in an undisturbed environment. However, this action could induce stress response in the maternal environment. Although we do not know whether this isolation-induced stress response interferes with the development of the offspring, the MIA effect can be observed by following our procedure.

In addition, the strain and genetic background of the mice needs to be chosen and tested carefully for MIA induction. So far, the effect of MIA is mostly replicated in wild-type C57BL/6N mice8,10,13,16. Others have also observed the MIA effect in BTBR mouse strain19. It has been shown that poly(I:C) could elicit different immune responses in genetically engineered mice13,22-24, which may introduce additional confounding effects to the offspring.

If it is necessary to modify the dosage for specific batches of poly(I:C), it is also important to modify the concentration of the poly(I:C) solution for injection such that the volume injected remains roughly 5 µl per gram of mouse weight. For example, according to the manufacturer's procedure, poly(I:C) is supposedly reconstituted at ~10 mg/ml of water to yield a polynucleotide in physiological phosphate buffered solution. Compared to our 40 mg/ml solution, the lower concentration would increase the volume of injection by 4 folds. For pregnant mice, a large volume of buffer injection could potentially increase the pressure on the embryos and introduce undesired, confounding effects to the offspring. Therefore, we choose to dissolve poly(I:C) powder in 0.09% sodium chloride with a higher final concentration in order to reduce the volume of injection.

IL-6 is chosen to be the marker of acute inflammatory response because prior research has identified IL-6 signaling as a critical factor in mediating the effects of MIA on brain development and behavior. Following poly(I:C) treatment, IL-6 is the most upregulated cytokine in maternal blood and placenta10,12. Most importantly, Smith et al. demonstrated that of several highly upregulated cytokines, only IL-6 exhibited both necessity and sufficiency for induction of MIA-associated brain and behavioral abnormalities. That is, maternal injection of anti-IL-6 could effectively prevent abnormal behavioral and transcriptomic abnormalities in MIA offspring, while neutralizing other cytokines did not10. Moreover, maternal injection of recombinant IL-6 alone (without poly(I:C)) reproduces MIA-associated transcriptional and behavioral abnormalities seen in the MIA fetal brain and offspring12,15.

Compared to other methods to induce MIA (e.g., lipopolysaccharide (LPS) or influenza), poly(I:C) is relatively safe and provides an easy way to control the intensity of the immune response. Although the inflammatory response elicited by maternal poly(I:C) administration is acute and transient, its effect on the offspring behaviors and brain development is profound. Overall, once the technique of inducing MIA through poly(I:C) injection at E12.5 is mastered, one can then proceed to perform different behavioral and biological assays to examine the effect of this environmental risk factor on the offspring. At the same time, one could also combine the method with genetic modifications or other treatments before, during, or after pregnancy to investigate the causes and possible therapeutic approaches to autism and schizophrenia.