We present a protocol to rapidly form giant polymer vesicles (pGVs). Briefly, polymer solutions are dehydrated on dried agarose films adhered to coverslips. Rehydration of the polymer films results in rapid formation of pGVs. This method greatly advances the preparation of synthetic giant vesicles for direct applications in biomimetic studies.

Polymer vesicles, or polymersomes, are being widely explored as synthetic analogs of lipid vesicles based on their stability, robustness, barrier properties, chemical versatility and tunable physical characteristics. Typical methods used to prepare giant-sized (> 4 µm) vesicles, however, are both time and labor intensive, yielding low numbers of intact polymersomes. Here, we present for the first time the use of gel-assisted rehydration for the rapid and high-yielding formation of giant (>4 µm) polymer vesicles (polymersomes). Using this method, polymersomes can be formed from a wide array of rehydration solutions including several different physiologically-compatible buffers and full cell culture media, making them readily useful for biomimicry studies. This technique is also capable of reliably producing polymersomes from different polymer compositions with far better yields and much less difficulty than traditional methods. Polymersome size is readily tunable by altering temperature during rehydration or adding membrane fluidizers to the polymer membrane, generating giant-sized polymersomes (>100 µm).

Creation of synthetic cell-sized, giant unilamellar vesicles (GUVs) is of increasing interest in the in vitro reconstruction of different cellular processes to build a framework for the generation of an artificial cell-like system1,2. While GUVs composed of lipid membranes are excellent mimics of natural, biological membranes, they are unstable against environmental fluctuations and have a fairly short shelf life. Due to these limitations, amphiphilic block copolymers have been used as lipid mimics to form polymer vesicles, or polymersomes. Within this context, polymersomes are advantageous in the development of biomimetic cell systems due to their increased stability3, chemical versatility4,5 and modifiable physical traits6-8. 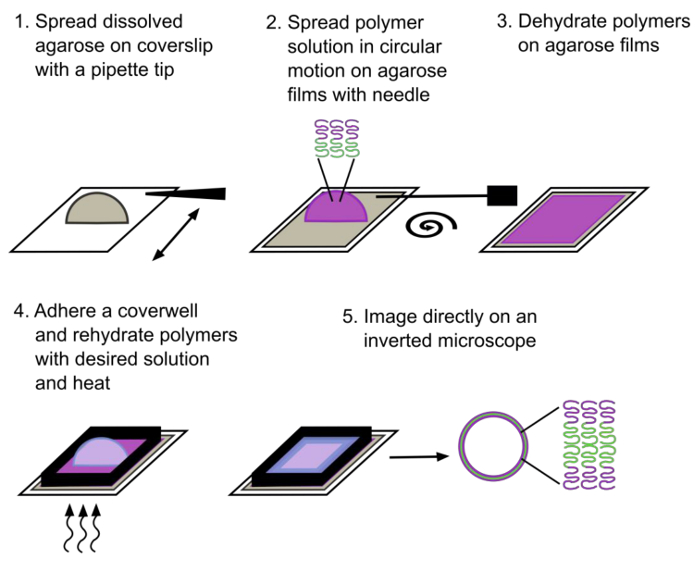 Note: Gloves and a lab coat should be worn at all times throughout this protocol. Safety goggles are likewise required during work with any organic solvent or any step with possible splashing.

5. Characterization of Polymersomes by Fluorescence Recovery after Photobleaching (FRAP) 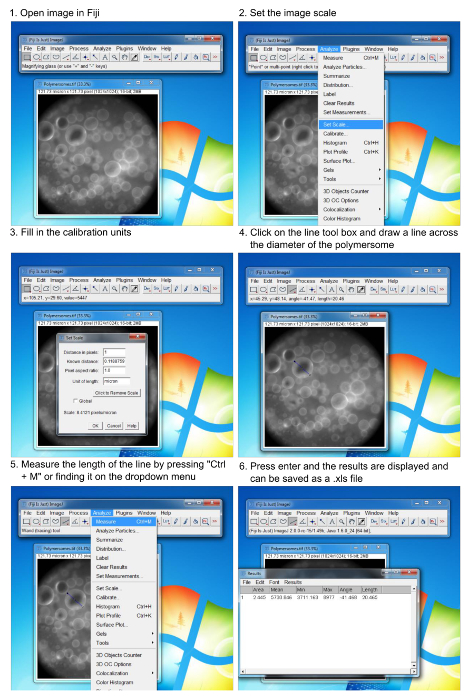 Figure 6. Process for the size analysis of polymersomes using imaging software. Step-by-step instructions on how to measure the diameter of the vesicles formed. User must know the calibration units in pixels/µm of the microscope used. Please click here to view a larger version of this figure.

Polymersomes were formed using the procedure outlined above (Figure 1) and the common laboratory equipment shown in Figure 2. Polymersomes were rehydrated with deionized water (Figure 3) and imaged on an inverted microscope in epifluorescence using a 100X oil objective. Note that if polymersomes are not visible, they might have formed at sizes too large to capture with a 100X oil objective; a lower power objective may need to be used instead. One of the advantages of using gel-assisted rehydration is the versatility of forming polymersomes in a variety of rehydration solutions. Polymersomes were successfully formed in deionized water, a full mammalian cell culture medium, sucrose solutions and two physiologically relevant buffer solutions (phosphate-buffered saline (PBS) or Tris-buffered saline (TBS)), as shown in Figure 4. Under standard conditions (rehydration with water at 40 °C for 1 hr), greater than ~70 polymersomes are typically found per 40 x 40 µm2 field of view. While the surface production of polymersomes is not homogenous, there are dozens of fields of view with this representative yield. Furthermore, polymersomes were stable in solution for at least 24 hr.

All image processing was completed using open-source imaging software (Figure 6). Images collected were opened in the software program. The calibrated pixel size was entered into set scale box. Using the line tool, lines were drawn across the diameters. After each individual line was drawn, the calibrated length was measured and added to the results box. Data can then be plotted in the mathematical software of choice (e.g., Excel, Prism, Origin, etc.) 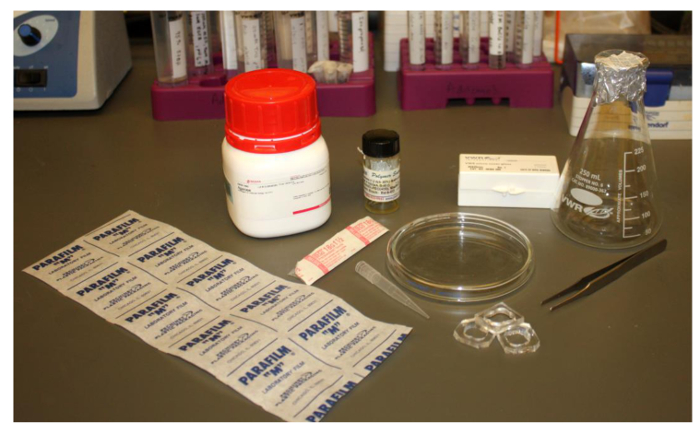 Figure 2. Picture of the common and inexpensive lab materials required for the formation of polymersomes. The items required are: Parafilm, an 18.5 G needle, polymer in chloroform or other appropriate solvent, a 1,000 µl pipette tip, an Erlenmeyer flask, tweezers, agarose, 25 mm square coverslips, PDMS imaging wells and a glass Petri dish. Please click here to view a larger version of this figure.

Figure 3. Pictures of the gel-assisted rehydration method. Dissolved agarose is spread on a 25 mm square coverslip until an even film coats the entire coverslip. Coverslips are then put into a 37 °C incubator and film is dehydrated. A polymer solution is deposited onto the dehydrated agarose film and spread using a needle in a circular motion. The coverslip is then place in a desiccator O/N to fully evaporate any solvent residues. Finally, and imaging chamber is adhered to the substrate and polymers are rehydrated with solution of choice and placed into a Petri dish at 40 °C for least 25 min to allow for the formation of polymersomes. Please click here to view a larger version of this figure.

Figure 4. Polymersomes can form in a variety of different buffers. PEO-PBD polymer films were rehydrated with the indicated buffer at 40 °C for 1 hr. Scale bar = 10 µm. Please click here to view a larger version of this figure.

Table 1. Increasing the temperature during rehydration results in increased polymersome size. Average diameters for greater than 100 polymersomes in water per different temperature condition were calculated and are depicted here. Error is standard deviation.

Using gel-assisted rehydration, unilamellar polymersomes can be formed rapidly (<30 min), in a variety of rehydration solutions (including cell culture media) and with a variety of different polymers (data not shown). The formation of multilamellar or asymmetric vesicles was not observed using this technique. Throughout this work, we used poly(ethylene oxide)-b-poly(butadiene) (PEO-PBD, EO22-BD37) neutral diblock copolymer. Many different polymer compositions (including charged diblock copolymers) work well using this method (not shown). However, some commercially available triblock copolymers and higher molecular weight diblock copolymers (~ >5,000 Daltons) do not form distinct polymersomes. For all of the experiments in this manuscript, a low concentration of labeled lipid was doped into the polymer solutions for visualization purposes only. Other methods for visualization, including polymers directly functionalized with a fluorescent dye can also be used. Polymersomes can likewise be imaged with bright field microscopy, though fluorescence microscopy provides greater resolution.

Most materials used in this protocol are successfully stored and used for days to weeks. The solidified agarose can be reboiled and reused until the agarose begins to have aggregates even after boiling, or the solidified agarose begins to dry. Coverslips with dried agarose films can be stored and used indefinitely (e.g., months). The polymer dissolved in chloroform can be stored at -20 °C for several months. Once the polymer film is dried on the agarose films, however, the films need to be stored under house vacuum and used within two weeks (longer term storage was not directly determined, but there are noticeable differences in polymersomes formed from polymer films older than two weeks).

Using the gel-assisted rehydration protocol presented here, hundreds of uniformly-shaped polymersomes are formed rapidly with just a few hours of labor using standard equipment and inexpensive laboratory reagents. Furthermore, polymersomes can be formed in a variety of physiological buffer solutions and from different polymer compositions (not shown). Minor alterations to the method do not negatively alter the formation of polymersomes, rendering gel-assisted rehydration a versatile and accessible technique to scientists with varying technical expertise.

The ability to easily create giant polymersomes on the size scale of cells is essential for building artificial cell-like systems. The ease of use and versatility of gel-assisted rehydration to make these polymersomes offers a huge advancement in the biomimetic field for the creation of robust cell-membrane mimics. For example, using this technique, strategies for encapsulation of different intracellular components, functionalization of the polymer with cell-membrane proteins and incorporation of membrane transport proteins, just to name a few, can be designed to build polymersome-based artificial cells.

We would like to gratefully acknowledge Dr. Ian M. Henderson, Andrew Gomez and Dr. Walter F. Paxton for their technical expertise, advice and help in this work. This work was supported by the U.S. Department of Energy, Office of Basic Energy Sciences, Division of Materials Sciences and Engineering (BES-MSE). ACG, DYS and GDB were supported by BES-MSE. This work was performed, in part, at the Center for Integrated Nanotechnologies, an Office of Science User Facility operated for the U.S. Department of Energy (DOE) Office of Science (user project number RA2015A0004, PI: ACG).