Although the first reports on aerogels made by Kistler1 in the 1930s dealt with aerogels from both inorganic oxides (silica and others) and biopolymers (gelatin, agar, cellulose), only recently have biomasses been recognized as an abundant source of chemically diverse macromolecules for functional aerogel materials. Biopolymer aerogels (pectin, alginate, chitosan, cellulose, etc.) exhibit both specific inheritable functions of starting biopolymers and distinctive features of aerogels (80-99% porosity and specific surface up to 800 m2/g). This synergy of properties makes biopolymer aerogels promising candidates for a wide gamut of applications such as thermal insulation, tissue engineering and regenerative medicine, drug delivery systems, functional foods, catalysts, adsorbents and sensors. This work demonstrates the use of pressurized carbon dioxide (5 MPa) for the ionic cross linking of amidated pectin into hydrogels. Initially a biopolymer/salt dispersion is prepared in water. Under pressurized CO2 conditions, the pH of the biopolymer solution is lowered to 3 which releases the crosslinking cations from the salt to bind with the biopolymer yielding hydrogels. Solvent exchange to ethanol and further supercritical CO2 drying (10 - 12 MPa) yield aerogels. Obtained aerogels are ultra-porous with low density (as low as 0.02 g/cm3), high specific surface area (350 - 500 m2/g) and pore volume (3 - 7 cm3/g for pore sizes less than 150 nm).

Aerogels are a class of porous materials that can be prepared using a variety of precursors ranging from inorganic (such as silica, titania, zirconia and others), synthetic (such as resorcinol formaldehyde, polyurethane and others) or biopolymers (polysaccharides, proteins and others)2. What sets them apart from the conventional porous materials is their ability to simultaneously possess all the three characteristics; namely high surface area, ultra-low density and mesoporous pore size distribution (i.e., pore sizes from 2-50 nm). With aforementioned characteristics, aerogels are extensively applied in the fields of insulation, biomedicine, catalysis, adsorption and absorption applications, pharmaceuticals and neutraceuticals2. Taking into account the above possibilities, the production of biopolymer gel systems and their subsequent transformation to aerogels opens up a multitude of opportunities towards high value added bio based materials. Such an endeavor is taken up in this study using amidated pectin as an example.

Aerogels are typically produced by the sol-gel technique. Gels are systems consisting of liquid entrapped in a matrix and can be prepared by covalent, ionic, pH induced, thermal or cryo cross linking3. For this specific system, we utilize ionic crosslinking; i.e., a bivalent cation (e.g., calcium) to crosslink biopolymeric chains together. To perform controllable ionic crosslinking of biopolymers such as amidated pectin or alginate, one can utilize the diffusion method or the internal setting method4. In the diffusion method, gelation occurs at first in the outer layer followed by diffusion propagation, as the cations diffuse from outer solution into an amidated pectin or alginate droplet or layer4. In the internal setting method, the insoluble form of the crosslinker is homogenously dispersed in the biopolymer solution and cations are released by initiating a pH change4,5,6. However, both techniques face an issue regarding the homogeneity of the final gel when produced in slab or monolithic form. This work demonstrates the use of high pressure CO2 (5 MPa) for the production of amidated pectin hydrogels building further on previous works on alginate gels3,7. In brief, it is an internal setting gelation technique that utilizes pressurized CO2 to reduce pH instead of weak acids to produce homogeneous gels. With an increase in the pressure, the solubility of carbon dioxide in water increases accompanied by a lowering of pH to 3.08. This causes calcium carbonate to solubilize, releasing the calcium ions. The calcium ions crosslink with the amidated pectin biopolymer to yield hydrogels. Stable homogeneous gels down to very low biopolymer concentrations (0.05 wt%) could be produced using this technique7.

The typical hydrogels obtained after gelation step with higher crosslinking degree (q=2) (as instructed in Protocol section 2) are shown in Figure 1. The samples on the left (sample A and B) are the 2 wt% and 1 wt% pectin gels obtained by CO2 induced gelation. By decreasing the biopolymer concentration (0.5 wt% or lower), the gels become transparent (sample C). Further reduction in the biopolymer concentration (0.25 wt%) also yields stable hydrogels (sample D) but these gels are very fragile and can break when handling. The bubbles observed inside the hydrogels are created during depressurization when the dissolved CO2 leaves the gel water system due to decrease in CO2 solubility.

The amidated pectin aerogel characteristics are presented in the Table 1. The obtained aerogels are ultra-porous with low density (as low as 0.013 g/cm3) measured as the ratio between the mass of the aerogel and its volume. The surface area is measured by the nitrogen adsorption. For pectin aerogels, it yielded a specific surface area between 350 - 500 m2/g. The pore volume for pore sizes in the 4-150 nm range is measured by the Kelvin model of pore filling using nitrogen (BJH method). The pore volume for the amidated pectin aerogels was between 3 - 7 cm3/g for pore sizes between 4 and 150 nm. 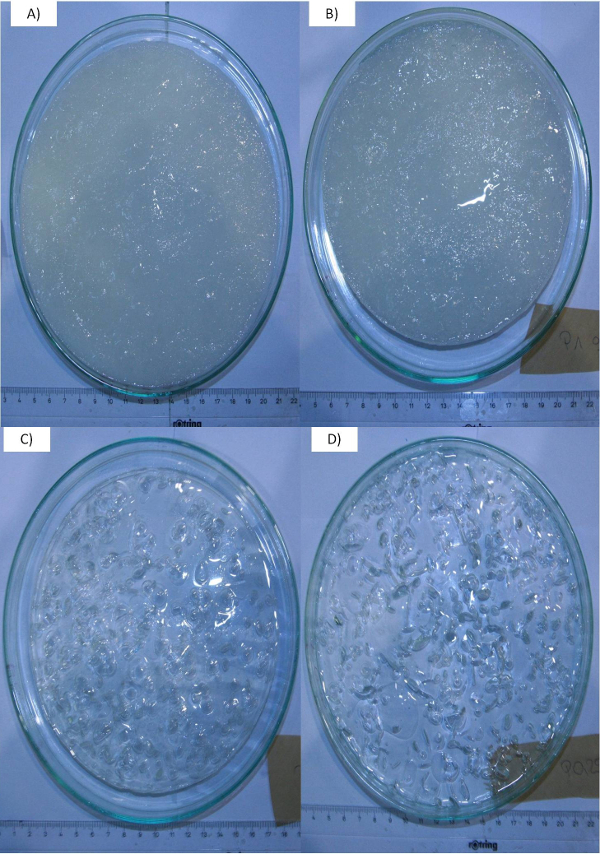 By using the CO2 induced gelation technique, one can eliminate the need for chemical substitutes (for example acetic acid or glucono delta-lactone (GDL)) required for inducing the crosslinking of the biopolymer. The surface areas of the amidated pectin aerogels are in the higher ranges of literature values5, however the pore volumes are much higher than those presented in literature5. Higher pore volumes were also observed for alginate aerogels prepared by CO2 induced gelation7. However, it remains to be verified whether the reason for this high pore volumes (4-150 nm pore size range) is due to the gelation technique or an inherent property of the biopolymers previously not addressed in literature. Pectin aerogels have been reported in literature to possess superinsulating properties12 and alginate aerogels prepared by this technique also possess thermal conductivities in the superinsulating range3,7. Therefore, the amidated pectin aerogels produced by this technique may also be envisaged to possess superinsulating properties.

The rate of depressurization in Protocol Section 2 is an important step in the hydrogel preparation. Fast depressurization can lead to increased macroporosity of the gels. This phenomena can be applied for tissue engineering applications where macroporosity of the material with interconnectivity is an important feature for the growth and proliferation of cells13,14. In addition, the crosslinking degree in Protocol Section 1 plays an important role in the syneresis and swelling property of the amidated pectin hydrogels. This is similar to alginate hydrogels whose swelling behavior is influenced by the crosslinker concentration as well15. Thereby aerogels made by amidated pectin can also be tuned to possess superabsorbent property similar to those reported for alginate aerogels16.

By using the CO2 induced gelation considering amidated pectin (or alginate) as the primary system, further diversity can be incorporated into the aerogels by introducing different cross linking agents and biopolymer combinations. Several metal carbonates (e.g., zinc, nickel, cobalt, copper, strontium, barium) could be used for cross linking3, where cations can be released by pH lowering in aqueous media with pressurized CO2 (3-5 MPa). However, insoluble salts of some of these cations may not form stable dispersions for lower biopolymer concentrations and can settle down at the bottom leading to inhomogeneous gels. This is a general issue with the internal setting gelation method including CO2 induced gelation3 and thereby, the technique's usability for an application should be evaluated on a case to case basis.

As supercritical CO2 drying (scCO2 drying) is a quintessential step in aerogel production, any combination of pre-processing steps such as solvent exchange and drying using CO217,18 or gelation, solvent exchange and drying using CO27 could provide a clear processing advantage. The advantage is envisioned as integrated one pot process: where biopolymer dispersions can be converted into biopolymer aerogels using CO2 as the main processing medium in a single autoclave. For certain pharmaceutical applications, one can also envision performing a four step: gelation, solvent exchange, supercritical drying and active component loading5,19 process in a single autoclave using CO2 as the processing medium. Post treatment such as protective coating of drug loaded aerogels in certain cases is necessary for targeted drug release20.