The purpose of this manuscript is to present a method for measuring monocyte and granulocyte phagocytosis and oxidative burst activity in human blood samples.

The granulocyte and monocyte phagocytosis/oxidative burst (OB) activity assay is a simple, straight-forward technique that is frequently used to gather information about innate immune function following prolonged and intensive exercise.1-4 When studying the response of the immune system to a stimulus, granulocytes and monocytes are of particular interest because they play a central role in host defense and are the first immune cells to accumulate at the site of infection.5 Neutrophils, a type of granulocyte, are the first cells to translocate into damaged muscle tissue following intensive exercise.6 Phagocytosis and OB activity are the most common measures of granulocyte and monocyte function,7 and are preferred as indicators of innate immune cell function because of their central role in both the infection process and the repair process.

The assay described in this manuscript utilizes a basic flow cytometer to provide a quantitative determination of granulocyte and monocyte phagocytosis and OB activity in whole blood. The use of whole blood in this technique is advantageous because it allows the assay to be conducted without a time-consuming purification procedure. This assay can easily be modified to accommodate a variety of research designs and lab capabilities. For example, Liao et al. utilized a similar technique to show that neutrophil OB activity is increased and neutrophil phagocytosis is decreased following traumatic brain injury.8 In another example, McFarlin et al. described an elegant modification of this technique that uses allophycocyanin (APC)-conjugated CD66b and high-performance tandem APC-conjugated CD45 labeling with image-based flow cytometry to classify granulocytes in terms of their phagocytosis and OB activities.7,9

Our research group has used various adaptations of this technique as an indicator of innate immune function in overweight, obese, and athletic populations for almost 20 years.10,11 The text below will provide the reader with step-by-step instructions for performing this assay and highlight areas that the reader may adapt to meet the needs of their research.

NOTE: All blood collection procedures were conducted in accordance with the guidelines set forth by the Appalachian State University (ASU) Institutional Review Board (IRB). 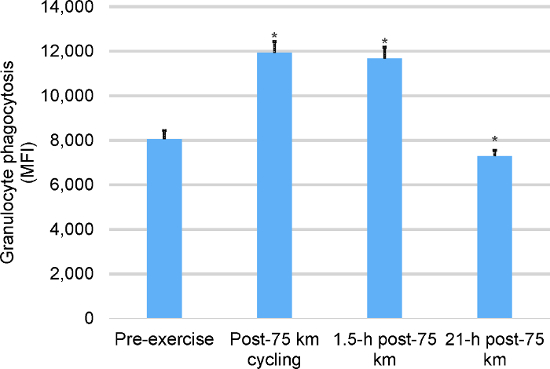 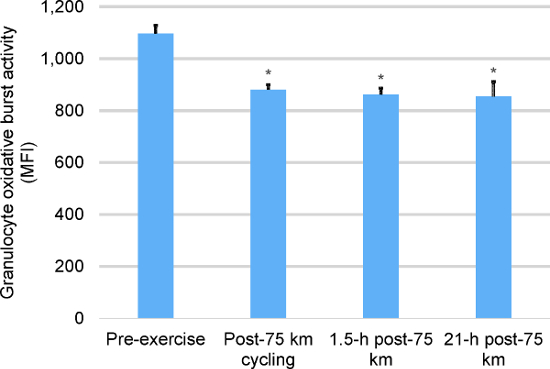 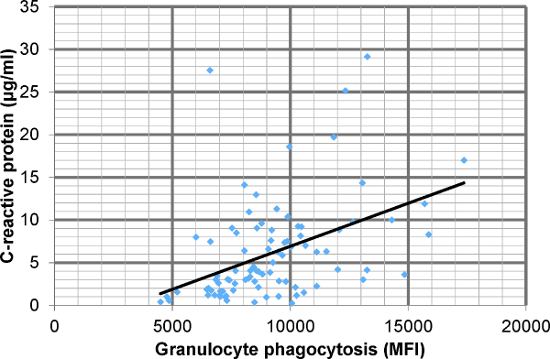 This manuscript provides a step-by-step protocol for the determination of two indicators of granulocyte and monocyte function. We have identified a few steps that are critical to the success of this assay. One such step is the ice-bath incubation that occurs immediately prior to the addition of bacteria. Thorough cooling of all samples will minimize the effect of temperature on phagocytosis and OB activity. Another critical step is the addition of bacteria to each sample. A 8:1 bacteria:phagocyte ratio produces optimal results; however other researchers may find that this ratio will need to be modified to produce suitable results. Another critical step is the use of RBC lysing and WBC fixing reagents to lyse RBCs and fix WBCs. The use of this such reagents ensures complete lysis of the RBCs and enables researchers to safely store processed samples at 4 °C overnight, and then run them through the flow cytometer the next day. Previous work (unpublished) indicates that RBC lysing and WBC fixing can be used to delay the flow cytometry of fixed samples by as many as 12 hr without compromising data integrity.

This procedure can easily be modified to meet the capabilities and interests of the researcher, but it should be emphasized that optimization is necessary when adaptations are made. A few of the most common adaptations that have been reported are to the target bacteria, the label/probe, and the incubation time. Researchers have produced exceptional results when Escherichia coli7,8 is used in place of S. aureus as the target pathogen (both at the 8:1 ratio). A fungus, such as Saccharomyces cerevisiae, may also be suitable as a substitute for E. coli. In addition, researchers frequently use a pH-sensitive molecular probe,7,12 instead of FITC, as the probe for phagocytosis. Likewise, probes other than HE are commonly used for measuring OB activity, including dichlorofluorescin diacetate (DCF-DA)10 and dihydrorhodamine 123 (DHR).13 Reported incubation times vary from 20 min to 120 min,12,14,15 with McFarlin reporting that the maximal response time may vary by bacterial target.7 It should also be noted that the optimal incubation times may vary between the phagocytosis and OB aspects of the assay.7

As with all laboratory assays, troubleshooting may be necessary when establishing this technique in a new research setting. The authors advise that optimization of the bacteria:phagocyte ratio is the key to success for this assay. The authors also note that the data from a sample should be discarded from analysis if fewer than 80% of the cells in the granulocyte population from a non-diseased participant are FITC positive; in this situation, the sample can be re-collected and re-analyzed, if possible.

There are a few limitations to the granulocyte and monocyte phagocytosis and OB activity assay described in this manuscript. One such limitation is the exclusive use of FSC and SSC to identify the cell populations of interest. The use of cell surface markers would allow researchers to positively identify cell populations.10 However, the addition of this feature would require more than a basic flow cytometer, and is thus beyond the scope of this manuscript. Another limitation of this assay is that it relies on the efficacy of trypan blue to quench the fluorescence of probes that have not been internalized by the immune cells of interest. A pH-sensitive molecular probe7,12 can be used as an alternative to FITC in situations where internalization is a concern. Since such a probe is only fluorescent in acidic environments such as those in endocytic vesicles, the acquired fluorescence represents internalized particles only. In addition, several researchers have criticized the current assay because it does not include a parallel set of samples that is incubated in ice water instead of at 37 °C to control for baseline immune cell activity. On several occasions, we included this "ice condition" when performing the granulocyte and monocyte phagocytosis and OB activity assay, and found that it does not significantly improve the quality of the data (unpublished).

In summary, this manuscript describes a technique for measuring phagocytosis and OB activity in granulocytes and monocytes. This is a simple, straightforward assay that can be easily modified to account for laboratory capabilities and research interests. In exercise science- and obesity-related research, this measure of innate immune function will allow the investigator to explore the effects of many potential countermeasures, including weight loss, supplement usage, dietary interventions, and other lifestyle changes. Upon mastering this technique, researchers will be able to monitor acute and chronic changes in immune cell function in response to diet, exercise, and many other stimuli.

The authors would like to acknowledge Zack Shue, Casey John, and Lynn Cialdella-Kam for their assistance during the optimization of this procedure.