Isolated hilar and mediastinal recurrence (IMHR) following external beam radiation therapy (EBRT) in patients with lung cancer is common. These patients do not have many treatment options and are usually offered palliative chemotherapy or best supportive care. Endobronchial ultrasound (EBUS)-guided intratumoral injection of cisplatin (ITC) is a novel approach for these patients. The procedure is performed under conscious sedation. The lesion is located with a bronchoscopy using EBUS, and a 22-gauge EBUS needle is advanced through the working channel of the scope and locked in position. Under ultrasound guidance, the wall of the tracheobronchial tree is punctured and the needle is moved into the target lesion. The needle stylet is then removed and cisplatin (40 mg/40 mL) is injected into the lesion. One to two sites are treated per session. Details of the procedure are described in the protocol section of paper. At our center, 50 sites were treated in 36 patients (19 males, 17 females). The mean age of our cohort was 61.9 ±8.5 years. We performed final analyses on 35 patients and 41 sites. 24/35 (69%) had complete or partial response (responders), whereas 11/35 (31%) had stable or progressive disease (non-responders). Overall, survival in our group was 8 months (95% CI of 6-11 months), with patients who responded having significantly better survival than the ones who did not.

Lung cancer is the most prevalent cancer worldwide in both men and women and accounts for 1 in 5 of all cancer-related deaths. It has a case fatality rate of 0.871,2. Recurrence after initial treatment accounts for most deaths in patients with lung cancer. Therapeutic options for recurrent lung cancer are limited. Recurrent lung cancer also leads to significant impairment in quality of life and to significant caregiver burnout and requires additional supportive care, all of which decrease the likelihood of acceptance and tolerance to further interventions3.

Nearly 30% of patients with NSCLC have locoregional recurrence after radiation4. Treatment options for these patients are limited and include systemic chemotherapy, which has an objective response rate of only 10%5,6. Although repeat chest radiation is feasible, it has been studied mainly for palliative purposes and symptom relief and has not been used for disease remission3.

At our institution, all patients with isolated mediastinal and hilar recurrence (IMHR) accessible through bronchoscopy were treated with an endobronchial ultrasound (EBUS)-guided transbronchial intratumoral injection of cisplatin (ITC). Concurrent treatment with systemic chemotherapy and/or external beam radiation therapy (EBRT) was allowed as per the treating oncologists' discretions. This manuscript highlights the safety, efficacy, feasibility, and detailed methods of the protocol used at our institution.

Data on all patients treated with EBUS-guided cisplatin were reviewed. The institutional review board at the University of Florida approved this study (#IRB201400823). All data was prospectively collected and retrospectively analyzed. Use the following enrollment criteria.

The response was measured by follow-up imaging 8-12 weeks after therapy. The response was classified as complete remission (CR), partial remission (PR), stable disease (SD), progressive disease (PD), or unable to assess response based on RECIST 1.1 criteria8. Patients with CR and PR were considered responders, and the others were classified as non-responders. Secondary outcomes included response based on tumor histology, size of recurrence, and concurrent systemic therapy. The side effects and feasibility of the protocol were also analyzed.

Kaplan-Meier curves were used to estimate the survival probabilities. The survival and PFS for responders versus non-responders was compared by the log-rank test. Associations between response rates and other factors were examined using Fisher's exact test. 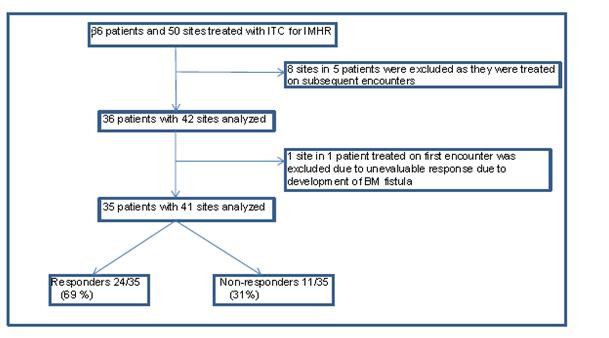 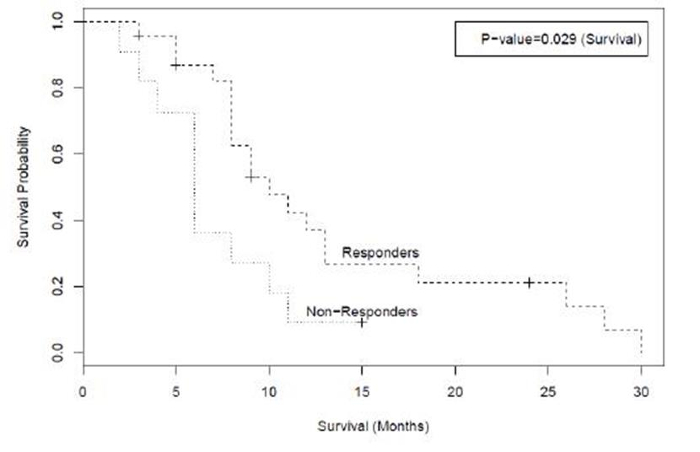 Figure 2: Kaplan-Meier Curves for Overall Survival in Months Amongst Responders and Non-responders. These curves show that patients who responded to therapy demonstrated statistically-significant overall survival as compared to non-responders. Please click here to view a larger version of this figure. 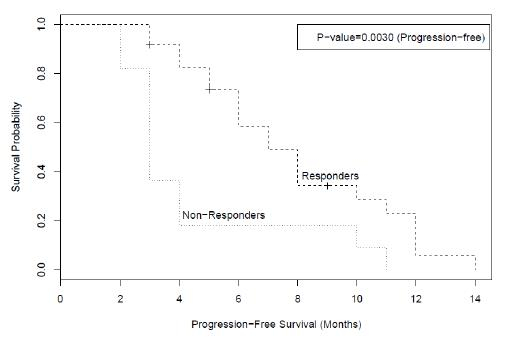 Figure 3: Kaplan-Meier Curves for Progression-free Survival in Months Amongst Responders and Non-responders. Patients who responded to treatment had statistically-significant improvements in progression-free survival. Please click here to view a larger version of this figure.

Table 1: Sub-group Analyses of Response to Cisplatin Based on a Few Select Variables. There was no statistically-significant difference in patient response based on tumor histology, size, or concurrent systemic therapy.

Our manuscript focuses on the management of isolated mediastinal and hilar recurrences of lung cancer for patients in whom more radiation is not an option. The incidence of IMHR is approximately 9%11. Different treatment options have been tried in these patients, including palliative chemotherapy, more external beam radiation therapy, or supportive care and surveillance. At our institution, we treat these patients with intratumoral cisplatin guided by bronchoscopy.

There has been a growing interest in intratumoral chemotherapy and immunotherapy over the last several years. One of the potential advantages of injecting chemotherapeutic agents into the tumor mass is that a significantly higher concentration (6-10 times) of the medication can be achieved in the tumor mass12. Cisplatin is commonly used for the treatment of lung cancer as a part of combination systemic chemotherapy13,14,and it has also been used intralesionally for head, neck, and malignant liver cancers15,16. Additionally, it has been utilized endoscopically for palliation of obstructive esophageal cancers17 and injected into gastric tumors18. Based on available evidence and experience, we chose to use cisplatin as the chemotherapeutic agent of choice for bronchoscopic ITC.

The critical step in this protocol involves the proper patient selection. All patients should demonstrate in-field recurrence from a previous disease, should present isolated disease in the chest, and should be discussed at a multidisciplinary tumor board to confirm their limited therapeutic options. From a procedural perspective, the ability to identify the site of recurrent disease on EBUS and to advance the needle reliably into the diseased node is important. Cisplatin should be injected into the tumor in 10 mL aliquots. An attempt must be made to inject 40 mg in four separate passes at different areas on the node. After injecting the drug, excess cisplatin should be suctioned from the distal airways. Due to concerns for developing bronchopleural fistula, concurrent radiation therapy to the same site is not recommended. Up to 2 sites can be treated in the same session. If more than one site is treated, each site should be injected with 20 mg of cisplatin.

In patients with stage III or stage IV NSCLC previously treated with chemotherapy who are treated with second-line chemotherapy, the median survival time is 4-10 months19,20. However, no studies to date have looked into the survival among patients with isolated hilar and mediastinal recurrence of lung cancer following full-dose radiation therapy. The overall median survival of 8 months in our cohort is comparable to the number quoted in existing literature and would suggest a survival benefit compared to best supportive care only. Additionally, the localized cisplatin injection is tolerated much better and has fewer side effects as compared to systemic chemotherapy.

There are several limitations to our study, including retrospective design. Although we have a very well-structured protocol, its performance outside of our institution has not been studied. Serum and tumor concentration of the drug were not analyzed, and some patients were receiving systemic therapy, which could have confounded the results. However, we believe that the response seen in our cohort can largely be attributed to localized cisplatin injection7,12.

EBUS-guided intratumoral injection of cisplatin is feasible, well-tolerated, and potentially safe and effective in patients with isolated hilar and mediastinal recurrence of lung cancer for whom no localized therapeutic options are available. Multicenter randomized trials should be conducted to further validate our findings.