We propose a protocol to investigate the transport of charged and uncharged molecules across articular cartilage with the aid of recently developed experimental and numerical methods.

Osteoarthritis (OA) is a debilitating disease that is associated with degeneration of articular cartilage and subchondral bone. Degeneration of articular cartilage impairs its load-bearing function substantially as it experiences tremendous chemical degradation, i.e. proteoglycan loss and collagen fibril disruption. One promising way to investigate chemical damage mechanisms during OA is to expose the cartilage specimens to an external solute and monitor the diffusion of the molecules. The degree of cartilage damage (i.e. concentration and configuration of essential macromolecules) is associated with collisional energy loss of external solutes while moving across articular cartilage creates different diffusion characteristics compared to healthy cartilage. In this study, we introduce a protocol, which consists of several steps and is based on previously developed experimental micro-Computed Tomography (micro-CT) and finite element modeling. The transport of charged and uncharged iodinated molecules is first recorded using micro-CT, which is followed by applying biphasic-solute and multiphasic finite element models to obtain diffusion coefficients and fixed charge densities across cartilage zones.

Molecular transport plays a vital role in the homeostasis of articulating joints, delivery of therapeutics to articular cartilage and contrast-enhanced cartilage imaging 1,2,3. Factors such as cartilage integration and intactness, solute charge and size as well as osmolality and concentration of bath in contact with cartilage may influence the transport rate 4,5,6. The transport of solutes, either neutral or charged, can be different between articular cartilage zones, because each zone consists of different concentrations and orientations of major extracellular matrix molecules, namely proteoglycans (PGs) and collagen type II 1,7,8,9,10,11. More importantly, the transport of charged solutes can be highly dependent on the concentration of proteoglycans comprising negative fixed charges within the extracellular matrix which increases across articular cartilage 8,9. Those parameters particularly fixed charge density (FCD), orientation of collagen fibrils and water content variation across cartilage may undergo alterations as osteoarthritis (OA) progresses, thereby signifying the importance of studying diffusion across cartilage.

In the current study, a protocol based on previously established experimental and computational studies 6,8,9 is proposed to accurately investigate diffusion under various boundary conditions using neutral and charged solutes in a finite-bath model of diffusion. The proposed methods are composed of micro-Computed Tomography imaging (micro-CT) of a system including cartilage and a finite-bath supported by advanced biphasic-solute and multiphasic finite element models. These models enable obtaining the diffusion coefficients of neutral and charged molecules as well as FCDs across various zones of articular cartilage. Using these models, one can gain better understanding of the behavior of the diffusing neutral and charged molecules that could be used to investigate the interactions between cartilage and overlaying finite-bath.

NOTE: The protocol presented here is adopted from the experimental and computational procedures of recent research papers 6,8,9. The protocol is illustrated in Figure 1.

The cadaveric materials were collected with permission from veterinary faculty of Utrecht University.

NOTE: The diffusion in this problem is assumed to take place in 1D (along the z-axis), which complies with the experimental boundary condition. Therefore, the geometry could be arbitrarily created. 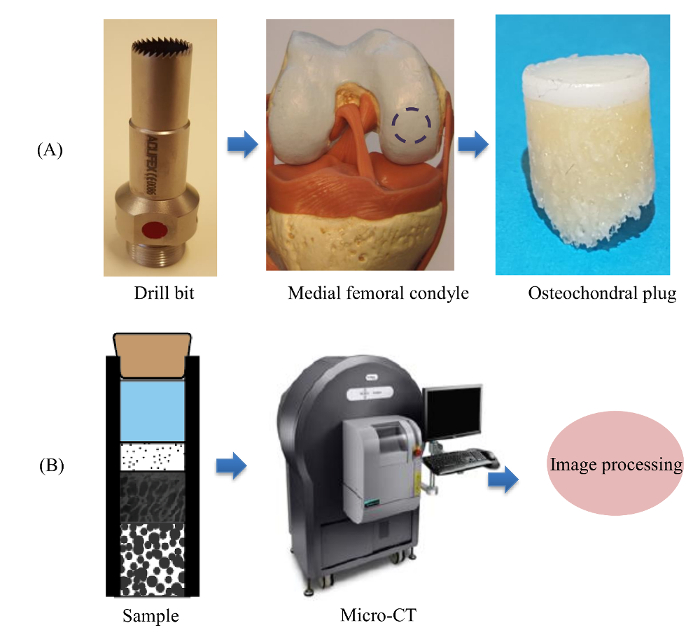 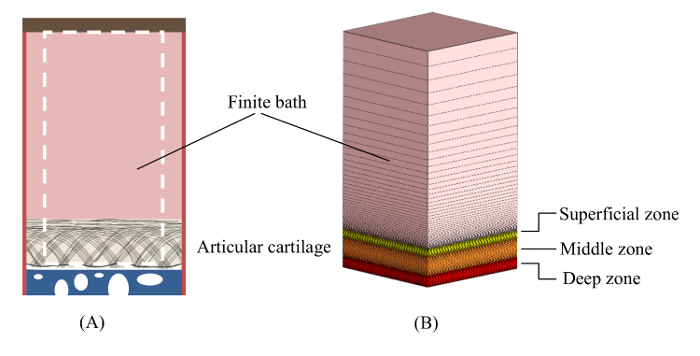 Figure 2: Schematic. A) Experimental design. B) Multi-zone computational model consisting of the finite bath, superficial, middle and deep zones of cartilage and associated mesh. Please click here to view a larger version of this figure.

In OA, articular cartilage undergoes significant changes most importantly GAG loss, and collagen fibril damage 17,18,19. Those changes may affect the diffusive behavior of solutes through articular cartilage 20,21. We studied axial diffusion of two iodinated contrast agents, i.e. iodixanol (charge = 0) and ioxaglate (charge = -1), in cadaveric equine osteochondral plugs using micro-CT. To quantify the diffusion process of a neutral solute (iodixanol), a biphasic-solute model and a charged solute (ioxaglate) multiphasic model were developed in FEBio that considered the zonal structure of cartilage. The biphasic-solute and multiphasic models could predict the diffusion of iodixanol and ioxaglate across articular cartilage (Figure 3). These models enabled obtaining diffusion coefficient of iodixanol (biphasic-solute) and diffusion coefficient as well as FCD (ioxaglate) in different cartilage zones 8,9.

We presented an experimental protocol combined with a finite element modeling procedure to study the diffusion of neutral and charged solutes across articular cartilage. According to our recent studies, the proposed models could accurately describe the transport of both neutral (biphasic-solute) and negatively charged (multiphasic) solutes across different zones of articular cartilage 8,9. It is widely believed that articular cartilage becomes functionally limited through loss of its vital components such as negatively charged GAG macromolecules as well as collagen fibrils during OA progression 21,22,23,24. Using the technique proposed in this study, one can potentially examine the healthiness of articular cartilage. The transport of neutral solute may be augmented in OA primarily because of lower interactions between the solute as well as GAGs and collagens. On the other hand, the transport of negatively charged solutes could help acquire information with respect to the concentration of fixed charges of proteoglycans, thereby giving some indication of the level of OA progression.

The biphasic-solute and multiphasic models that were developed based on the emergence of finite-bath concept according to the previous studies could serve as platforms by which accurate estimation of zonal properties of articular cartilage could be provided. Limitations associated with large baths of contrast agents, namely possible beam-hardening artifacts, and assigning a single diffusion coefficient to articular cartilage 7,20,25,26,27,28,29,30 drove the motivation to develop the current study. In the future OA research, our developed models might potentially find applications for early OA diagnosis.

There are some critical steps required both in experiments and computational simulations. To preserve cartilage integrity during experiments, one would require adding sufficient amounts of protease inhibitors to prevent subsequent enzymatic activities. In case of using one sample for more than one experiment, wash-out time for the penetrated solutes after equilibration was approximately 48 h. The wash-out efficiency needs to be checked using micro-CT. When using our set up employing equine cartilage, the minimum volume of the overlying bath equivalent to an infinite bath was calculated to be five times higher than cartilage volume. Moreover, to perform finite element modeling of diffusion, it is critical to apply actual solute diffusion coefficient in the bath since deviation from that could affect the outcomes.

In the underlying finite element models, solute size effect was not implemented and therefore could not be studied. Our proposed finite-bath model offers some advantages, namely understanding diffusion process in the articulating joints more appropriately, and reducing beam hardening artefacts. Our proposed technique combining experiments and computational models enables scrutinizing the diffusion attributes of cartilage when positively charged contrast agents are applied. The knowledge of actual solute diffusion coefficient in the bath seems to be crucial as that might significantly affect the accuracy of the obtained diffusion coefficients across articular cartilage. This would require either obtaining the diffusion coefficient of bath experimentally or readily using literature values.

In conclusion, we proposed a general protocol consisting of experiments and computations to investigate the transport of charged and uncharged solutes across articular cartilage. Using the protocol, one can successfully obtain diffusion coefficients and fixed charged densities in different cartilage layers.

The authors would like to express their gratitude to Mr. Jeroen van den Berg and Mr. Matthijs Wassink from the development mechanics group at UMC Utrecht for their help in wrapping process of the osteochondral plugs. This work was supported by a Grant from Dutch Arthritis Foundation.