Murine full-thickness skin transplantation is a well-established in vivo model to study alloimmune response and graft rejection. Despite its limited application to humans, skin transplantation in mice has been widely employed for transplantation research. The procedure is easy to learn and perform, and it does not require delicate microsurgical techniques nor extensive training. Moreover, graft rejection in this model occurs in a very reproducible immunological reaction and is easily monitored by direct inspection and palpation. In addition, secondary skin transplantation with donor-matched or third-party skin grafts can be performed on more complex transplant models as an alternative and uncomplicated method to assess donor-specific tolerance. The complications are low and are in general limited to anesthesia overdose or respiratory distress after the procedure. Graft failure, on the other hand, occurs commonly as a result of poor preparation of the graft, incorrect positioning in the graft bed, or inappropriate placement of the bandage. In this article, we present a protocol for full-thickness skin transplantation in mice and describe the important steps necessary for a successful procedure.

Organ transplantation is the treatment of choice for patients with end-stage organ failure, and outcomes have improved remarkably with advances in surgical procedures and immunosuppression protocols. However, long-term immunosuppression is associated with significant side effects, and the development of new strategies that promote tolerance remains the goal of modern transplantation research.

Numerous animal models have been developed for basic research in transplantation, to study the mechanisms of allograft rejection and to test immunosuppression approaches for preventing graft rejection and for promoting long-term tolerance1-3. Mouse models have become the mainstay of immunological research due to the exclusive and vast availability of diagnostic and therapeutic antibodies and well-defined inbred and transgenic strains. Skin transplantation is a simple procedure that does not require special microsurgical skills and can be easily monitored postoperatively. Taken together, mouse skin transplantation has been an exceptional tool to study many aspects involved in the alloimmune response, including antigen delivery, cell trafficking, and tissue destruction during graft rejection4,5.

Here, we show the step-by-step procedure for full-thickness skin transplantation using the mouse model, and we describe the important steps necessary for a successful engraftment of the transplanted skin.

All procedures were conducted in accordance with the Guide for the Care and Use of Laboratory Animals of the National Institute of Health (NIH) and were approved by the Johns Hopkins University Animal Care and Use Committee (JHUACUC). The specific procedures were performed under the approved ACUC protocols MO13M292 and MO13M370.

In complete mismatch models, full-thickness skin grafts are usually rejected in 8 to 12 days. In minor mismatch models, rejection responses are slower, more variable, and the skin graft appearance is characterized by less distinct changes, such as contraction or loss of hair (Figure 2). Acute graft rejection generally begins with swelling and erythema of the graft. These events are followed by graft desiccation, shrinkage, and scab formation (Figure 2B and C). Depending on the degree of MHC mismatch and the immunosuppression protocol, rejection can occur by a subacute process, marked by subtle changes such as loss of hair, pigmentation, dermal ridges, and graft volume. In these cases, a rejected graft appears shiny, white, and hairless, with uneven edges (Figure 2F)14.

Figure 1: Covering of the Graft with the Bandage. (A) Skin graft placed on the right trunk. (B) Bandage made with a folded gauze and two plastic strips bandages. (C) Recipient mouse placed on the gauze. (D-F) Bandage wrapped around the mouse. Please click here to view a larger version of this figure. 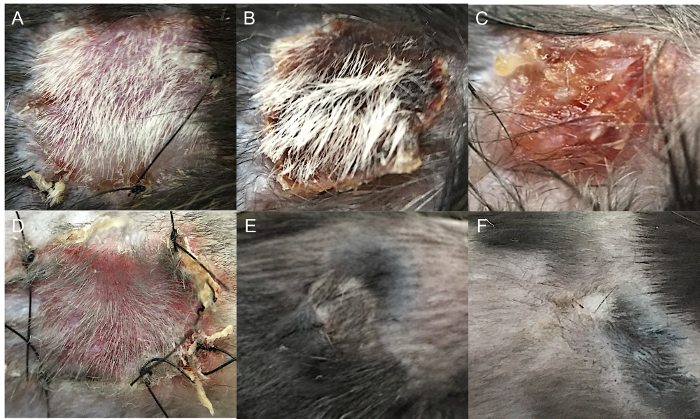 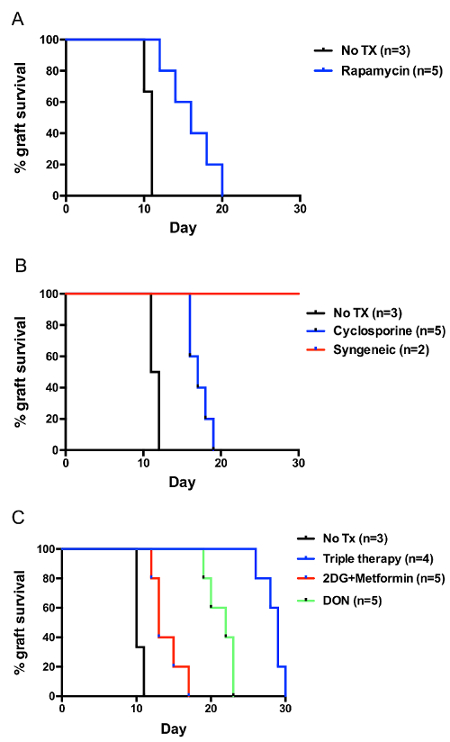 Since its introduction by Medawar, first in human studies and then in rabbits and mice, skin transplantation has been an invaluable model for the study of allogeneic immune responses6,7. In this manuscript, we present a model of large-scale, non-vascularized, full-thickness skin transplantation using the upper and lower back skin. Various alternative methods, including using the tail skin or ear skin of the mouse as the graft tissue source, have been reported to date8,9. These models present the distinct advantage of technical simplicity and allow for high-volume throughput. The relative deficiency of epidermal Langerhans cells and dermal dendritic cells in tail skin grafts, however, leads to delayed rejection as well as to facilitated graft acceptance by the host, particularly in minor MHC mismatch models10,11. Therefore, full-thickness trunk skin grafting is considered a more robust model and more suitable to study T-cell-mediated acute rejection12.

In addition, our model employs simple techniques and does not require advanced microsurgical skills. The operating time is short (~ 10 min per mouse from the onset of anesthesia to the completion of the procedure), and the postoperative morbidity and mortality is negligible. The overall operative mortality (death within 24 hr after surgery plus death before removal of the bandage) has been reported to be 3.8%13. Most of the complications arise from anesthesia overdose or overly-restrictive bandages, which can be easily prevented by close monitoring of respiratory function during the immediate postoperative period and by rapid removal of the bandage at the earliest signs of respiratory distress6,17.

The most critical factor in the process of engraftment is the revascularization of graft tissue by the ingrowth of host vessels to the graft6. The harvested skin requires careful preparation, and the dissection of the panniculus carnosus is a critical step. We prefer to remove the panniculus carnosus under a microscope. It is recommended to start the dissection from one of the edges and to advance slowly by pushing the muscle and separating it from the skin with the blade of a curved tenotomy angled slightly. The site of the graft bed should be far from joints and the spine. Before making incisions into the recipient mouse, the shoulder and hip should be moved to visualize the skin folds that help to demarcate the level of the joints. When removing the recipient skin, it is important to avoid damaging the blood vessels that run superficial to the panniculus carnosus. If bleeding occurs, apply local compression and remove blood and clots that may interfere with engraftment. Finally, the bandage should not cause breathing difficulties that compromise recovery, although it must be sufficiently constrictive to prevent displacement of the graft and auto-mutilation during the process of revascularization. Plastic Strips Band-Aids are adherent and strong enough for this purpose. We combine two bandages to completely wrap the mouse waist and to allow the placement of a folded gauze between the bandage and the graft (Figure 1). The bandage is removed by cutting the ventral side of it, and the rest is removed by the animal, in order to avoid disrupting the graft while trying to remove the bandage manually.

In summary, full-thickness skin transplantation is a well-established model with abundant references in the literature. The procedure is easy to perform, the operating time is short, and the postoperative complications are limited. The critical steps are related to meticulous donor skin harvest and the correct placement of the recipient bandage. Future studies involving biomaterials that promote angiogenesis and tissue repair may further improve the success rate of the procedure.